Read Heart of Darkness and the Congo Diary Online

Heart of Darkness and the Congo Diary 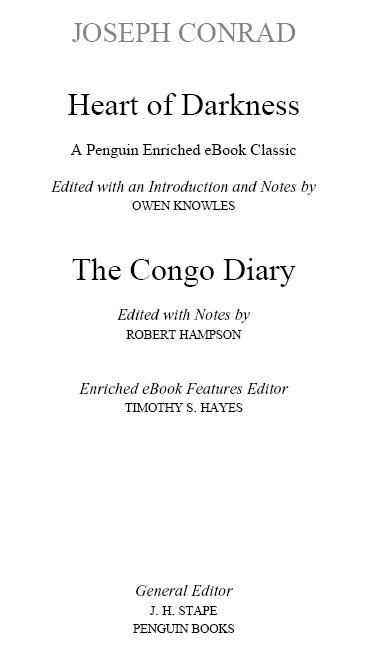 HEART OF DARKNESS
AND
THE CONGO DIARY

JOSEPH CONRAD
(JÃ³zef Teodor Konrad Korzeniowski) was born in December 1857 in Berdichev (now in Ukraine) of Polish parents. His father, a poet and translator, and his mother were exiled for nationalist activities and died when he was a child. He grew up and was educated informally in Lemberg (now L'viv) and Krakow, which he left for Marseilles and a career at sea in 1874. After voyages to the French Antilles, he joined the British Merchant Service in 1878, sailing first in British coastal waters and then to the Far East and Australia. In 1886, he became a British subject and received his captaincy certificate. In 1890, he was briefly in the Congo with a Belgian company. After his career at sea ended in 1894, he lived mainly in Kent. He married in 1896 and had two sons.

Conrad began writing, in his third language, in 1886. His first novels,
Almayer's Folly
(1895) and
An Outcast of the Islands
(1896), were immediately hailed as the work of a significant new talent. He produced his major fiction from about 1897 to 1911, a period that saw the publication of
The Nigger of the âNarcissus'
(1897),
Heart of Darkness
(1899),
Lord Jim
(1900), and the political novels
Nostromo
(1904),
The Secret Agent
(1907), and
Under Western Eyes
(1911). Considered “difficult,” his writing received considerable critical acclaim, but not until 1914 after the appearance of
Chance
did it win a wide public. The dazzling narrative experiments and thematic complexities of Conrad's earlier fiction are largely absent from his later writings, which are pitched to a more popular audience.

Fame saw the offer of honorary degrees and a knighthood (both declined), capped by a triumphal publicity tour in America in 1923. In addition to novels, Conrad produced short stories, plays, several essays, and two autobiographical volumes,
The Mirror of the Sea
(1906) and
A Personal Record
(1908â9). He died in August 1924 at the age of sixty-six.

OWEN KNOWLES,
Research Fellow in the University of Hull, is the author of
A Conrad Chronology
(1989),
An Annotated Critical Bibliography of Joseph Conrad
(1992), and the
Oxford Reader's Companion to Conrad
(2000) (with Gene M. Moore). Advisory Editor of
The Conradian
, he has edited Conrad's
Almayer's Folly
(1995), and has co-edited
A Portrait in Letters: Correspondence to and about Joseph Conrad
(1996) and, for Cambridge University Press, Volumes VI and IX (2002 and forthcoming) of
The Collected Letters of Joseph Conrad
.

ROBERT HAMPSON
is Professor of Modern Literature in the Department of English at Royal Holloway, University of London. A former editor of
The Conradian
, his publications include
Joseph Conrad: Betrayal and Identity
(1992) and
Cross-Cultural Encounters in Conrad's Malay Fiction
(2001). The author of numerous articles, he has also edited
Victory
and
Nostromo
, Rudyard Kipling's
Something of Myself
and
Soldiers Three/In Black and White
, and Rider Haggard's
King Solomon's Mines
for Penguin.

J. H. STAPE
has taught in universities in Canada, France, and the Far East. Author of
The Several Lives of Joseph Conrad
(2007), he has edited
The Cambridge Companion to Joseph Conrad
(1996) and Conrad's
Notes on Life and Letters
(2004), and co-edited
A Personal Record
(2007) and Volumes VII and IX (2005 and forthcoming) of
The Collected Letters of Joseph Conrad
for Cambridge University Press. He has also co-edited Conrad's
An Outcast of the Islands
and
The Rover
for Oxford World's Classics, and has written on Thomas Hardy, Virginia Woolf, William Golding, and Angus Wilson. He is Contributing Editor of
The Conradian: The Journal of the Joseph Conrad Society (UK)
.

TIMOTHY S. HAYES
is an Instructor of English at Auburn University in Alabama. His research interests include narrative theory and the novel, particularly the works of Robert Louis Stevenson and Joseph Conrad.

Edited with an Introduction and Notes by
OWEN KNOWLES

Edited with Notes by
ROBERT HAMPSON

(a division of Penguin Books Ltd)

Heart of Darkness
Introduction and Notes, A Note on the Texts, Glossary

The moral right of the editors has been asserted

Introduction to
Heart of Darkness

A Note on the Texts

Map of the River Congo

Contemporary Reviews of
Heart of Darkness

Images of the Congo

Owen Knowles wishes to record that the task of preparing his edition of
Heart of Darkness
has been greatly eased by the generous advice of the general editor, J. H. Stape, and the late Hans van Marle. He is also indebted to the work of two of the most influential Conrad critics of recent decades, the late Ian Watt and Professor Cedric Watts.

Robert Hampson wishes to acknowledge the assistance of the late Hans van Marle in preparing the annotations to his edition of âThe Congo Diary'.

Our thanks are due to Donald J. Shewan for the preparation of the map.

Warmest thanks are due to Louisa Sladen for her help in preparing the manuscript.

1857
JÃ³zef Teodor Konrad Korzeniowski, coat-of-arms NaÅÄcz, is born on 3 December in Berdichev (Ukraine), the only child of the Polish poet and translator Apollo Korzeniowski and Ewelina (or Ewa), nÃ©e Bobrowska.

1862
Apollo Korzeniowski, his wife and son are exiled from Warsaw to Vologda, northern Russia.

1868â9
Permitted to leave Russia, Apollo Korzeniowski relocates to Austro-Hungarian territory with his son, first in Lemberg (now L'viv, Ukraine) and vicinity and then in Cracow, where he dies (May).

1870
Becomes the ward of his maternal grandmother and maternal uncle, Tadeusz Bobrowski, and begins private studies with Adam Pulman, a medical student at Cracow's Jagiellonian University.

1874â7
Arrives in Marseilles to work for the shippers Delestang et Fils, sailing to the French Antilles in the
Mont-Blanc
and
Saint-Antoine
. A period of biographical mystery ensues, involving a possible brief side voyage to Venezuela, gun-running in the Basque country for the doomed cause of the pretender to the Spanish throne and smuggling near Marseilles.

1878
After amassing debts and gambling losses, attempts suicide (February or March). Leaves Marseilles in the British steamer
Mavis
for Mediterranean waters (Malta and Constantinople) and then lands at Lowestoft, Suffolk. Employed as ordinary seaman in the
Skimmer of the Sea
(Lowestoft to Newcastle).

1878â80
In the
Duke of Sutherland
(to Australia) and then the
Europa
(to Genoa, Sicily and Greece). Passes the British Merchant Service second mate's examination.

1880â85
Third mate in the
Loch Etive
(to Australia); second mate in the ill-fated
Palestine
(bound for Bangkok, but sinks in the Straits of Malacca), ships out of Singapore in the
Riversdale
(to Madras) and after crossing India by rail joins the
Narcissus
in Bombay (to Dunkirk). Passes the examination for first mate (1884).

1886
Second mate in the
Tilkhurst
(Hull to Wales, Singapore, Calcutta, Dundee). Submits first story, âThe Black Mate', to a competition for
Tit-Bits
. Becomes a British subject and passes the captaincy examination, receiving his âCertificate of Competency as Master'.

1886â8
Second mate in the
Falconhurst
(London to Penarth); first mate in the
Highland Forest
(Amsterdam to Semarang) and
Vidar
(Singapore to Celebes and Borneo ports); captain of the
Otago
(to Bangkok, Australia and Mauritius).

1891
Recuperating from African experience in the German Hospital, London, then in Geneva for hydrotherapy. On return, works for warehouse and shippers Barr, Moering, Company.

1891â4
First mate in the passenger clipper
Torrens
(to Australia), meeting John Galsworthy (1893), later novelist and playwright awarded a Nobel Prize. Second mate in the
Adowa
(Rouen to Quebec and Montreal, but making only a return voyage from London to Rouen as the company collapses). Sea career ends.

1894
Tadeusz Bobrowski dies. Meets Edward Garnett, his literary mentor and advisor, and Jessie George, his future wife. Though still looking for a berth, turns to professional authorship in earnest.

1895
Almayer's Folly
. In Geneva in the spring for hydrotherapy, and in Paris in August on business for Fountaine(G. F. W.) Hope, his first English friend.

1896
An Outcast of the Islands
. After marrying Jessie George, honeymoons in Brittany (AprilâSeptember), later settling in Stanford-le-Hope, Essex, near Hope and family. Christmas holidays in Cardiff.

1901
Queen Victoria dies. Works on âAmy Foster', âFalk' and
Romance
(with Ford).
The Inheritors
(with Ford).

1902
The Boer War ends. Writes âThe End of the Tether'.
Youth: A Narrative and Two Other Stories
.

1903
Works on
Nostromo. Typhoon and Other Stories
and
Romance
(with Ford) appear.

1904
Two-month sojourn in London. Engages âtypewriter' Lilian M. Hallowes, his secretary on and off for twenty years.
Nostromo
.

1906
In Montpellier (mid-Februaryâmid-April). John Alexander Conrad born in London.
The Mirror of the Sea
.

1907
In Montpellier (JanuaryâMay). Writes âThe Duel', and then in Geneva (MayâAugust).
The Secret Agent
. The Conrads move to Luton, Bedfordshire.

1908
Works on
Under Western Eyes
(then âRazumov'). Involved with Ford's
English Review
, in which âSome Reminiscences' appears (later
A Personal Record
).

1909
The Conrads move to Aldington, Kent.
The Nature of a Crime
, with Ford, with whom he quarrels and breaks off relationship. Writes âThe Secret Sharer' and more of
Under Western Eyes
.

1910
Suffers a mental and physical breakdown, recovery extending into the summer. The Conrads move to Capel House, Orlestone, Kent. Reviews for the
Daily Mail
(July) and writes âA Smile of Fortune' and âThe Partner'.

1912
A Personal Record
in America, then as
Some Reminiscences
in England. Writes two articles on the
Titanic. 'Twixt Land and Sea
. Writes short stories. Meets Richard Curle, journalist and short-story writer, in effect the unofficial private secretary to Conrad's later career.

1914
Visiting Cracow in late July, the Conrads are caught by the outbreak of war. Taking refuge in Zakopane in the Tatras, return home via Vienna and Genoa (OctoberâNovember).

1915
Writes âPoland Revisited'.
Victory
and
Within the Tides
appear. Borys Conrad in basic training in the Army Service Corps, and fights in France for the next few years.

1916
Writes âThe Warrior's Soul' and âThe Tale'. For the Admiralty, visits naval bases, tours in a minesweeper, takes a flight, and sails in a Q-ship in the North Sea.

1918
Becomes friendly with novelist Hugh Walpole. Writes articles about the Merchant Service and Polish events for the newspapers. Borys Conrad is shell-shocked and gassed. The war ends (11 November).

1919
Basil MacDonald Hastings's adaptation of
Victory
has a successful London run, including a royal performance. Moves to Spring Grove, near Wye, Kent.
The Arrow of Gold
. Moves to Oswalds, Bishopsbourne, near Canterbury.

1920
Polish relative Aniela ZagÃ³rska visits the Conrads for six months.
The Rescue
. Writes, with Pinker,
Gaspar the Strongman
, a film version of âGaspar Ruiz'. In December, collected editions begin publication in England by Heinemann (in the early new year in America by Doubleday, Page).

1923
Triumphant publicity tour in New York, with excursions to Connecticut and Massachusetts (MayâJune). Briefly in Normandy to arrange for French immersion experience for son John (September).
The Rover
.

1924
Declines a knighthood. Succumbs to fatal heart attack on 3 August. After Roman Catholic rites, is buried in Canterbury Cemetery.
The Nature of a Crime
(with Ford) and
The Shorter Tales
. Ford rushes out
Joseph Conrad: A Personal Remembrance
.