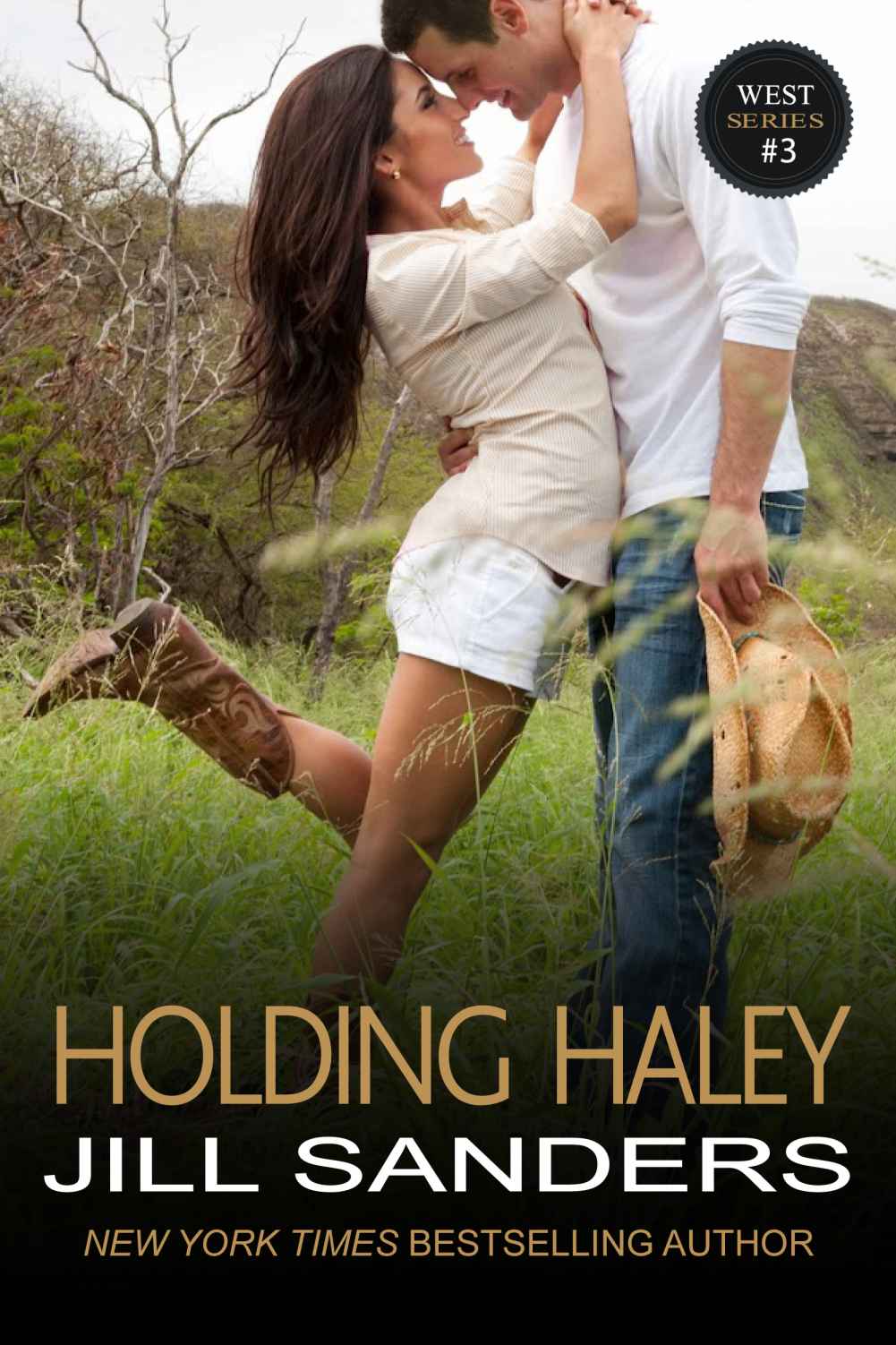 Haley has waited her whole life for Wes. They were secret sweethearts all throughout school until he shocks her by joining the military right after graduation. Heartbroken, Haley must wait until the day he comes home. But it’s been five long years, and she has finally decided to move on with her life. That is, until he walks back into town, sexier than ever.

Wes has had one thing on his mind since leaving town—getting back to Haley. His experiences overseas have made him realize what he almost let slip through his fingers. All he wants now is to prove to her that waiting for him was the right choice.

Other titles by Jill Sanders

This is a work of fiction. Names, characters, places, and incidents are either the product of the author’s imagination or are used fictitiously, and any resemblance to actual persons, living or dead, business establishments, events, or locales is entirely coincidental.

Haley West sat on the edge of the pond and cried until she couldn’t cry anymore. She was fourteen years old and now both of her parents were gone.

Her father’s funeral had taken place just last week. It was still hard to believe that he wasn’t there to talk to or go riding with anymore. Haley’s mother had died when she was just four years old, too young to really remember her. But her first real memory was that of the shock, knowing that it was all because of her that her mother had been taken away from them. She grew up believing that it was her, and not the tornado, that had tragically ended their young mother’s life, and she did everything in her power to make sure she never caused harm to anyone or anything again.

Feeling a nudge on her shoulder, she looked up at Dash, her gray quarter horse. He was the fastest horse on the ranch and he was all hers. Her pa had purchased him for her fourteenth birthday a few months ago. She had mentioned to him that she wanted to try her hand at barrel racing like her big sister, Alexis. After getting the new horse, she had tried it a few times but decided she liked running through the fields with him a lot more. They were so fast together. The horse seemed to know what she was feeling and thinking. He always took her to where she wanted to be, even today.

“I know,” she told the horse. It was time for supper and she’d be missed if they didn’t get back to the house.

Lauren, her oldest sister, was in charge of everything now, including her two younger sisters. Using the back of her sleeve to wipe her tears away, Haley started to get up from the soft ground where she’d thrown herself for a good bout of crying. She stopped when she heard a branch break not far from her.

All around the watering pond, the bushes and trees here were tall. Even this early in spring, the green leaves were very thick. It took a while, but finally she noticed a tall boy standing right beside one of the low branches of a large oak, just a few yards away.

“
Hey,” she said easily. She’d been born and raised in Fairplay, Texas and knew almost everyone who lived there.

“
Hey,” he said, stepping forward slowly. He was wearing an old blue and white shirt, his sleeves rolled up to his elbows. His jeans and boots were covered in dry dust and dirt, most likely from going through the fields. His dark hair was long and spiked up a little, like he’d run his hands through it. He had the darkest eyes she’d ever seen, but when he smiled, they lightened to a warm honey brown.

He walked over to her now and pulled her into his arms. “I’m sorry,” he whispered next to her ear. “We just got back in town yesterday from spring break at my aunt’s in Dallas, and I heard what happened to your dad.”

She nodded her head against his shoulder. She thought she’d cried all her tears out, until Wes Tanner held her close. She cried some more against his shirt. And when she was done crying, she finally felt like everything was going to be okay.

H
aley was going to kill him. Her eyes bore holes into his back as he talked to his friends across the room. How dare he do this to her! Her arms were crossed over her chest. She tried to deny it, but she started to feel the sadness sinking in.

He hadn’t even had the balls to tell her the big news himself. Instead, she’d had to overhear it from his best friends, who were talking a little too loudly at the party after drinking a few too many beers. But if what they were saying was true, she was going to kill Wesley Tanner and bury him where no one would find his ruggedly good-looking body.

She circled around the room for a few minutes, trying to calm herself down before she approached him. It was their graduation party and every senior in their small school was there, partying it up. Everyone was in a chatty mood, so it took her a while to make her way across the room.

When she was approached by Hannah, one of her friends since grade school, she sighed, knowing she was going to be delayed yet again.

“Did you hear?” Her friend took her arm and pulled her towards a darkened corner. “Is it true?”

“
What?” Haley felt like rubbing her forehead. She was sure she was slowly getting a migraine, but since she’d never had one before in her life, she couldn’t be sure.

Haley didn’t know what to say. Should she tell her friend that her best friend and boyfriend since grade school had decided not to share this news with her? It was too much for her to think about. The betrayal was eating at her, so instead, she walked away, heading towards the door and some fresh air.

She walked out of the high school gym and headed towards the elementary school playground. Gathering up her long dress, she sat on the swing and removed her sandals. Pushing herself off from the sand, she started to slowly swing.

It couldn’t be true. Her mind started running through all the scenarios of how she was being punked. Maybe Wes didn’t even know what everyone was saying about him?

She was about to get up and go find him, to make sure, when she felt his hands on her back.

“
Want a push?” he asked right next to her ear.

She quickly stood up and turned towards him. “Is it true?” she asked, crossing her arms over her chest.

He mimicked her stance. “Is what true?” He tilted his head and looked at her.

“
Did you join the army? Are you leaving Fairplay for basic tomorrow?”

His eyes got big and his smile dropped away. “Haley, listen . . .” But she had turned and started walking away from him quickly. She didn’t need to hear him say it. She saw the answer in his eyes; it was written on his face.

When he reached for her arm, she yanked it away.

“
Why?” she shouted at him. “Why am I the last to know?” She didn’t care if anyone heard them. He’d just ripped out her heart and tossed it aside.

“
Don’t.” She stepped back. “I’ve known you all my life. We’ve never kept anything from one another. Why this? Why now?”

“
I didn’t mean to. I’ve told you for a few years now that I was thinking about it.”

“
Thinking about it! Not doing it!” She shoved his chest, sending him back a step. His hands dropped to his side and she saw his head lower.

“
No! You didn’t.” She turned and started walking across the softball field.

She’d always imagined them getting married. They’d talked about it, but now . . . She turned and glared at him as he followed behind her a few steps.

“I’m sorry,” he said, taking a step towards her. She let him reach out and take hold of her shoulders. The thin straps of her dress did little to prevent the chill that wracked through her as she thought about not seeing him every day. “I signed up last week, and didn’t have the courage to tell you. You know my father was in the army, and his father, and his . . .” He looked down at her and wiped a tear from her cheek. “I guess I didn’t know what I wanted to do until last week, until . . .” He dropped off and looked at her.

She knew what he was talking about. Until the scare she’d had last week when she thought she was carrying his child. She looked down at her flat stomach and wished she
had
been pregnant. Maybe then he would have stayed. They could have gotten married and she’d have everything she’d ever dreamed of.

Turning away again, she closed her eyes and wrapped her hands around her arms tightly. “So that’s it then? I’ve scared you away,” she whispered.

“No.” He came up behind her and pulled her close. “I guess it just made me realize that there’s a whole world out there waiting for me.” He sighed. “We’re too young to think about starting a family.” She felt him shake his head. “I just needed to do this.” He turned her around again.

The lights from the school were too dim and too far away to see his face clearly, but she knew his dark eyes would be pleading with her. She was thankful she couldn’t see the softness so she didn’t feel weak for caving, for caring too much.

Just then, Dale, one of Wes best friends, came running up to them. “There you guys are. Well, come on. We’ve got a going-away surprise for you.” He grabbed Wes by the shoulders and tugged him towards the gym again.

She stood there in the dark field as she watched Wes walk away from her. Halfway back to the gym, he glanced over his shoulder at her, but she was sure it was too dark for him to see her sitting in the dirt, crying.