In another experiment, Gazzaniga and his team flashed a picture of a chicken claw to the left-half brain – the side responsible for
speech – and simultaneously flashed a picture of a snowy landscape to the right brain. When asked what they saw, patients invariably answered ‘a chicken claw’. Gazzaniga then presented one patient, PS, with a series of picture cards and asked him to point to the one that best matched what he had seen. The patient’s right hand (controlled by his left brain) pointed to a picture of a chicken, but simultaneously his left hand shot out and pointed to a snow shovel. Gazzaniga then asked PS the million-dollar question: ‘Why did you point both to the chicken and to the shovel?’ PS replied, ‘Oh, the chicken claw goes with the chicken, and you need a shovel to clean out the chicken shed.’
12

What happened here? The left brain, which controls speech, had no data about the snow scene, and therefore did not really know why the left hand pointed to the shovel. So it just invented something credible. After repeating this experiment many times, Gazzaniga concluded that the left hemisphere of the brain is the seat not only of our verbal abilities, but also of an internal interpreter that constantly tries to make sense of our life, using partial clues in order to concoct plausible stories.

In another experiment, the non-verbal right hemisphere was shown a pornographic image. The patient reacted by blushing and giggling. ‘What did you see?’ asked the mischievous researchers. ‘Nothing, just a flash of light,’ said the left hemisphere, and the patient immediately giggled again, covering her mouth with her hand. ‘Why are you laughing then?’ they insisted. The bewildered left-hemisphere interpreter – struggling for some rational explanation – replied that one of the machines in the room looked very funny.
13

It’s as if the CIA conducts a drone strike in Pakistan, unbeknown to the US State Department. When a journalist grills State Department officials about it, they make up some plausible explanation. In reality, the spin doctors don’t have a clue why the strike was ordered, so they just invent something. A similar mechanism is employed by all human beings, not just by split-brain patients. Again and again my own private CIA does things without the approval or knowledge of my State Department, and then my
State Department cooks up a story that presents me in the best possible light. Often enough, the State Department itself becomes convinced of the pure fantasies it has invented.
14

Similar conclusions have been reached by behavioural economists, who want to know how people take economic decisions. Or more accurately,
who
takes these decisions. Who decides to buy a Toyota rather than a Mercedes, to go on holiday to Paris rather than Thailand, and to invest in South Korean treasury bonds rather than in the Shanghai stock exchange? Most experiments have indicated that there is no single self making any of these decisions. Rather, they result from a tug of war between different and often conflicting inner entities.

One groundbreaking experiment was conducted by Daniel Kahneman, who won the Nobel Prize in Economics. Kahneman asked a group of volunteers to join a three-part experiment. In the ‘short’ part of the experiment, the volunteers inserted one hand into a container filled with water at 14°C for one minute, which is unpleasant, bordering on painful. After sixty seconds, they were told to take their hand out. In the ‘long’ part of the experiment, volunteers placed their other hand in another water container. The temperature there was also 14°C, but after sixty seconds, hot water was secretly added into the container, bringing the temperature up to 15°C. Thirty seconds later, they were told to pull out their hand. Some volunteers did the ‘short’ part first, while others began with the ‘long’ part. In either case, exactly seven minutes after both parts were over came the third and most important part of the experiment. The volunteers were told they must repeat one of the two parts, and it was up to them to choose which; 80 per cent preferred to repeat the ‘long’ experiment, remembering it as less painful.

Every time the narrating self evaluates our experiences, it discounts their duration, and adopts the ‘peak-end rule’ – it remembers only the peak moment and the end moment, and evaluates the whole experience according to their average. This has far-reaching impact on all our practical decisions. Kahneman began investigating the experiencing self and the narrating self in the early 1990s
when, together with Donald Redelmeier of the University of Toronto, he studied colonoscopy patients. In colonoscopy tests, a tiny camera is inserted into the guts through the anus, in order to diagnose various bowel diseases. It is not a pleasant experience. Doctors want to know how to perform the test in the least painful way. Should they speed up the colonoscopy and cause patients more severe pain for a shorter duration, or should they work more slowly and carefully?

To answer this query, Kahneman and Redelmeier asked 154 patients to report the pain during the colonoscopy at one-minute intervals. They used a scale of 0 to 10, where 0 meant no pain at all, and 10 meant intolerable pain. After the colonoscopy was over, patients were asked to rank the test’s ‘overall pain level’, also on a scale of 0 to 10. We might have expected the overall rank to reflect the accumulation of minute-by-minute reports. The longer the colonoscopy lasted, and the more pain the patient experienced, the higher the overall pain level. But the actual results were different.

So what do the patients prefer: to have a short and sharp colonoscopy, or a long and careful one? There isn’t a single answer to this question, because the patient has at least two different selves, and they have different interests. If you ask the experiencing self, it will probably prefer a short colonoscopy. But if you ask the narrating self, it will vote for a long colonoscopy because it remembers only the
average between the worst moment and the last moment. Indeed, from the viewpoint of the narrating self, the doctor should add a few completely superfluous minutes of dull aches at the very end of the test, because it will make the entire memory far less traumatic.
15

Paediatricians know this trick well. So do vets. Many keep in their clinics jars full of treats, and hand a few to the kids (or dogs) after giving them a painful injection or an unpleasant medical examination. When the narrating self remembers the visit to the doctor, ten seconds of pleasure at the end of the visit will erase many minutes of anxiety and pain.

Evolution discovered this trick aeons before the paediatricians. Given the unbearable torments women undergo at childbirth, you might think that after going through it once, no sane woman would ever agree to do it again. However, at the end of labour and in the following days the hormonal system secretes cortisol and beta-endorphins, which reduce the pain and create a feeling of relief and sometimes even of elation. Moreover, the growing love towards the baby, and the acclaim from friends, family members, religious dogmas and nationalist propaganda, conspire to turn childbirth from a terrible trauma into a positive memory. 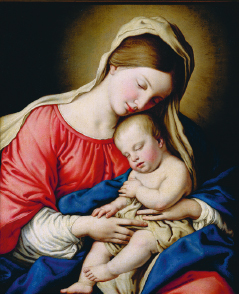 An iconic image of the Virgin Mary holding baby Jesus. In most cultures, childbirth is narrated as a wonderful experience rather than as a trauma.

One study conducted at the Rabin Medical Center in Tel Aviv showed that the memory of labour reflected mainly the peak and end points, while the overall duration had almost no impact at all.
16
In another research project, 2,428 Swedish women were asked to recount their memories of labour two months after giving birth. Ninety per cent reported that the experience was either positive or very positive. They didn’t necessarily forget the pain – 28.5 per cent described it as the worst pain imaginable – yet it did not prevent them from evaluating the experience as positive. The narrating self goes over our experiences with a sharp pair of scissors and a thick black marker. It censors at least some moments of horror, and files in the archive a story with a happy ending.
17

Most of our critical life choices – of partners, careers, residences and holidays – are taken by our narrating self. Suppose you can choose between two potential holidays. You can go to Jamestown, Virginia, and visit the historic colonial town where the first English settlement on mainland North America was founded in 1607. Alternatively, you can realise your number one dream vacation, whether it is trekking in Alaska, sunbathing in Florida or having an unbridled bacchanalia of sex, drugs and gambling in Las Vegas. But there is a caveat: if you choose your dream vacation, then just before you board the plane home, you must take a pill which will wipe out all your memories of that vacation. What happened in Vegas will forever remain in Vegas. Which holiday would you choose? Most people would opt for colonial Jamestown, because most people give their credit card to the narrating self, which cares only about stories and has zero interest in even the most mind-blowing experiences if it cannot remember them.

Furthermore, the experiencing self is often strong enough to sabotage the best-laid plans of the narrating self. For example, I can make a New Year resolution to start a diet and go to the gym every day. Such grand decisions are the monopoly of the narrating self. But the following week when it’s gym time, the experiencing self takes over. I don’t feel like going to the gym, and instead I order pizza, sit on the sofa and turn on the TV.