Read In an Adventure With Napoleon Online

In an Adventure With Napoleon 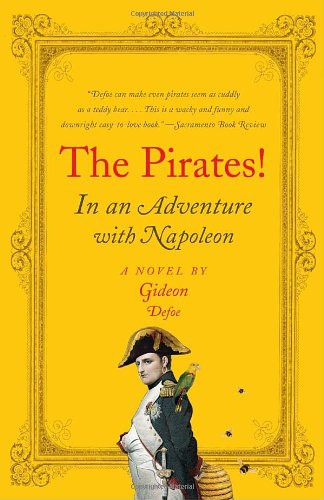 After adventures with Charles Darwin, Captain Ahab, and Karl Marx, The Pirate Captain faces off against his toughest—though not his biggest—challenge yet: Napoleon Bonaparte.
Bruised from a crushing disappointment at the Pirate of the Year Awards, the Pirate Captain decides that it’s time for a career change. Before long, his loyal crew, much to their dismay, find themselves en route to St. Helena, a bleak speck of an island a thousand miles from anywhere. But the Captain’s plan for a quiet life rearing bees is interrupted by the arrival of another visitor to the island—the recently deposed Napoleon Bonaparte. Is the island’s twenty-eight mile circumference big enough to contain two of history’s greatest egos? Has the Pirate Captain finally met his match? And who has the best hat?  Once again, Gideon Defoe has given us an exciting, swashbuckling tale of lavish tea parties, planning regulations, and raw political ambition.

“[Defoe] can make even pirates seem as cuddly as a teddy bear. . . . [A] funny and downright easy-to-love book.” —
Sacramento Book Review

THE PIRATES!
IN AN ADVENTURE WITH SCIENTISTS

THE PIRATES!
IN AN ADVENTURE WITH AHAB

THE PIRATES!
IN AN ADVENTURE WITH COMMUNISTS

Don’t start crying about it now, Sophie. I warned you
this was on the cards.

Module 1: What is electricity?
Something is amiss – Shiny thighs – Testing questions for the Pirate Captain

Module 2: Fun with molecules and atoms
Skull Island – The new face of pirating – the Pirate King himself!

Module 3: How do trees work?
The Captain drowns his sorrows – An old friend – A life-changing decision – Black Bellamy helps out

Module 5: What are lizards made from?
Meeting the natives – Tea – Another decision is made

Module 6: Which is the best planet?
A housewarming – The Captain’s conversation piece – An unexpected guest

Module 7: Class, society and teeth
An invitation – Tales of terror – A friendly competition

Module 8: The underwater world
A disappointing museum – The Captain has an idea – Unveiling a new exhibit

Module 9: At the railway station
It’s a beehive! – Everybody needs good neighbours – For the good of democracy

Module 11: The world of kestrels
Electioneering – A cheeky scamp – An embarrassing situation

Module 12: How do we digest beef?
A midnight visitor – The improbable dream

Module 14: Oxbow lakes
Getting up early – The duel – Things look bleak – Oh no!

Module 15: Asteroids, the vermin of the sky
A piece of driftwood – Not so different after all – Hallucinations

Module 16: Why are bridges?
A sad memorial – Sea monsters? – A change of heart

One
ON FIRE AT A HUNDRED
MILES AN HOUR

he best thing about the seaside,’ said the albino pirate, ‘is putting seaweed on your head and pretending you’re a lady.’

‘That’s rubbish!’ said the pirate with gout. ‘The best thing about the seaside is building sexy but intelligent-looking mermaids out of sand.’

The rest of the pirates, sprawled out on the deck of the pirate boat for their afternoon nap, soon joined in.

‘It’s the creeping sense of despair!’

Pretty soon the crew were a tangle of earrings
1
and
teeth and cutlasses. Buckles rattled, blades swished and bits of pirate went everywhere. But before they could really get going the doors to the downstairs of the pirate boat crashed open, and out strode the Pirate Captain himself. If you were to compare the Pirate Captain to a type of sedimentary rock – which after types of tree, creatures, and fonts was the next most popular thing for the pirates to compare stuff to – he would undoubtedly be a slab of polished sandstone, or maybe chert. The pirates all took one look at the Captain and stopped their argument dead in its tracks. Fists froze in mid-swing, and mouths hung agape. The Pirate Captain often had this effect on the crew, but usually it was because they held him in such high regard or because they were dazzled by his fantastically glossy and luxuriant beard. Today though, their sudden speechlessness had more to do with the fact that the Pirate Captain was wearing only a tiny bright-red swimming costume which left nothing to the imagination.

‘What’s all the racket about, you briney swabs?’ bellowed the Pirate Captain, his skin glistening in the sunlight with a strangely oily sheen.

‘Sorry, Captain,’ said the albino pirate. ‘We were just discussing what the best thing about the seaside is.’

‘The best thing about the seaside?’

‘Yes, sir. We couldn’t quite decide.’

The pirates waited expectantly for their Captain’s response, and tried not to notice the fit of his trunks.

‘Honestly,’ said the Pirate Captain, after a pregnant
2
pause. ‘I have no idea. What a ridiculous thing to be arguing about.’

And with that the Pirate Captain spun on a shiny heel, and strode back through the heavy wooden doors that led to the inside of the boat. There was an awkward silence as the pirate crew all stared at each other, at a bit of a loss. Pirate feet were shuffled. The pirate in green looked like he was about to say something and then stopped himself. Somewhere, a sea-lion barked.

Back downstairs in his office the Pirate Captain stood in front of his full-length mirror, scooped a handful of margarine from a little tub and lathered it thoughtfully into his torso. The office was its usual mess of sextants and astrolabes and half-smoked cigars. On one wall there hung a trophy cabinet that showcased the Captain’s awards from previous adventures. There was a faded rosette labelled ‘Junior Swashbuckler, Obstacle Race – Bronze’, and next to that there was a small cup engraved with ‘Pirate Captain, Best Nautical Oaths, Runner Up’. And the only other item was a pom-pom with a pair of googly eyes that was attached to a short piece of ribbon
revealing it to be an award for ‘Second Most Entertaining Anecdote About A Monstrous Manatee’. The Pirate Captain had just started to gaze a bit sadly at the empty space right in the middle of the cabinet when there was a knock at the door, and so he quickly looked back at his mirror and tried to adopt a businesslike air. The Captain’s loyal deputy, the pirate with a scarf, poked his head into the cabin.

‘Hello, Pirate Captain, could I have a word?’ said the pirate with a scarf.

‘Of course you can. And whilst you’re here, would you mind doing my thighs?’ The Captain gestured to the margarine. ‘Brings out the musculature,’ he added, by way of explanation. ‘I can’t quite rub it in at the back there.’

The pirate with a scarf dutifully began to rub margarine into his Captain’s hairy thighs.

‘Well, sir.’ The pirate with a scarf tried to pick his words carefully, because he knew that under all the fearsome tattoos, his Captain had a sensitive core, like a walrus that had swallowed a baby seal. ‘It’s just that there tends to be a certain …
pattern
to the start of our adventures. Some observers might say we were stuck in a rut, but the lads prefer to think of it as “a reassuring tradition”. You know, the crew will be having a discussion about some aspect of the piratical life, then it all gets a bit heated, and then you stride out onto the deck,
all teeth and curls, with your pleasant open face, and you settle the matter once and for all by making a keen, pithy observation that cuts straight to the point.’