Read Into the Dark Online 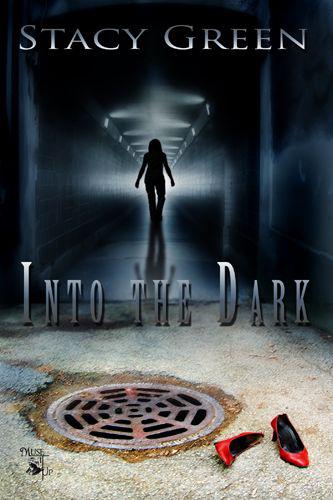 A Suspense Novel by Stacy Green

A two-hundred-mile labyrinth of dark storm drains serves as refuge for the delusional stalker who will go to any lengths to possess fragile, emotionally isolated Emilie Davis. To survive, Emilie will have to confront the secrets of her past she has kept locked away from everyone, including herself.

Emilie is a master escape artist—she’s fled a manipulative mother and a controlling ex-husband. But it’s impossible to evade a stalker who uses a bank robbery as a ruse to kidnap her. He’s still out there, hiding in the Las Vegas tunnels and dodging police. Emilie’s life careens out of control as her assailant continues his pursuit. She has nowhere to turn but to Nathan Madigan, the hostage negotiator who worked the robbery.

Nathan is haunted by his failure to protect a loved one fourteen years ago and has dedicated his life to saving others. Determined to catch the lunatic hunting Emilie, he finds himself losing his professional detachment. He fears history is about to repeat itself if he cannot protect Emilie from the Taker’s obsession.

The police close in on the Taker’s identity as Nathan and Emilie grow closer to each other and to resolving the misery of their own pasts. At the height of The Taker’s madness, his attempt to replace someone he’s lost will either kill them all or set them free.

Two people could have sent the Casablanca lilies, and Emilie never wanted to see either one of them again. The vase of sweet-smelling flowers taunted her as it sat beneath the window, soaking up the sun. No signature, no florist’s name. Just the poem—beautiful words that pierced Emilie with dread. She read the card once more.

The modest Rose puts forth a thorn,The humble sheep a threat'ning horn:While the Lily white shall in love delight,Nor a thorn nor a threat stain her beauty bright.

Emilie kept her love of poetry locked away along with the rest of her secrets. She traced the elegant handwriting. It wasn’t Evan’s. She couldn’t remember what her mother’s looked like.

The door swung open and banged against the rubber stop. Emilie jumped, slamming her knee against the metal desk.

“Who’re the flowers from?” Lisa stood in the doorway, a snide smile on her face. Tall and thin with black-framed glasses and too much make-up, the loan officer reminded Emilie of a trashy librarian. Her heady perfume filled Emilie’s office.

“I didn’t know you were seeing anyone.”

“Something like that. Leaving early today?” As if Emilie couldn't guess.

Emilie glared at the flowers. She’d been having a standoff with the lilies since their delivery a couple of hours ago. They were a bad omen, and she didn’t need any more rotten luck.

Emilie grabbed the vase and headed for the lobby. The lilies would make a nice addition to the kiosk in the center of the bank. At just past four p.m., WestOne employees were getting ready for the late afternoon rush. Sunlight streamed in through the entryway’s impressive wall of windows and cast colorful prisms on the tile floor.

The door chimed behind her as a customer entered. Mollie’s cheery greeting made Emilie smile. She rearranged the various brochures so the fragrant lilies were the centerpiece of the display. The door opened again. A stale scent wafted into the lobby along with a burst of hot, Las Vegas air. A collective gasp rippled across the room. Before Emilie could react, three quick, deafening gunshots rang out. People screamed as glass rained over the tile floor. Emilie threw her hands over her head and dropped to her knees.

Nathan Madigan sat down at the conference table with the rest of the SWAT team. “How many hostages?”

“Security cameras?” Chris Holt sat next to Nathan. He rapped his fingers on the table.

“Got a glimpse of one guy before his partner shot out the security cameras. Working on an I.D. Metro hasn’t had any luck communicating.”

Nathan nodded once in acknowledgement. “What’s the manager’s story?”

“I want to talk to her. She’ll have the best knowledge of the bank. The other hostages will see her as a leader.”

“Or she could be the inside man. Er, woman,” Chris pointed out. “There’s always an insider.”

“Let’s hope not.” Johnson looked around the room and made eye contact with each of the twelve officers. “Keep your heads in the game. Move out.”

Nathan followed the group in silence. He lived for days like this, but the nerves never subsided until he was on the scene and in the moment. In the two years he’d been a hostage negotiator, he had a stellar record. Statistics meant nothing to the ten people trapped inside WestOne Bank. Their lives were in his hands.

Inside the truck, he and Chris donned their Kevlar vests. “These things are so damned hot. Why can’t this kind of shit ever happen at night?”

Nathan ignored him. With the cameras out and no contact inside, he wasn’t going to be able to gauge their personalities until he got the perps on the phone. No mistakes. Nathan didn’t need another black memory to add to Jimmy’s anniversary.

“How’d today go?” Chris checked his assault rifle. “You come straight from your dad’s when we got the call?”

“Yeah. Went like it does every year. Aunt Kay made a big meal, tried to act like nothing was wrong. Kelsi did most of the talking. Dad only spoke to me when he had to. I don’t think he looked me in the eye once.”

“He’s not the only one it’s hard for. Just makes it worse to know he’ll never forgive me.”

Nathan adjusted the straps on his vest. “We both know what happened, Chris.”

“How’s your dad supposed to forgive you when you can’t forgive yourself?”

Fourteen years ago today was the first time Nathan had held someone’s life in his hands. He’d failed miserably.

Sweat dripped down the back of Emilie’s neck and saturated the collar of her shirt. Her shoulder-length hair clung to her sticky skin like a drenched yarn mop. She covered her nose as the acrid smell of perspiring bodies permeated the air. Police had shut the power off in the hopes of drawing out the two gun-wielding men. The temperature inside had soared. The hot sun peeked through the closed blinds in the front windows and cast the lobby in gray shadow.

She rapped her fingernails on the tile floor, sweating and shaking and sick.

The sense of being watched overwhelmed her.

One of the robbers had isolated Emilie from the group. He sat quietly beside her, his head turning every time she moved: the slightest shift, an anxious sigh, the continuous checking of her knock-off Cartier watch.

The rest of the hostages cowered in front of the teller’s counter, at the mercy of the other robber. Gun drawn, he stalked the lobby, the filthy duffle bag Emilie had filled with cash slung over his shoulder.

One of the trapped customers started to cry. Mollie put her arm around the terrified woman.

“Shut that bitch up.” The ringleader stopped in front of Mollie and stuck his gun in her face.

The customer pressed her fist against her mouth and nodded.

“Keep her quiet.” Crazy man waved his gun at the terrified group. “Rest of you, too.” He stomped away to resume his pacing.

What were these men thinking? Police surrounded the building. Escape was not an option.

Crazy seemed to understand this. He paced the room, reminding Emilie of a caged tiger she’d seen in the zoo as a child. The animal’s huge paws had worn a bare path in the green grass as it constantly circled its enclosure. Like the tiger, the man’s eyes shifted from person to person, spot to spot but never settled. He knew he was as trapped as the hostages.

But the man sitting next to her was calm. Serene. And he scared her to death.

“Why are you here?” Butterflies swarmed in her stomach. Sweat rolled down her forehead and stung her eyes.

Laugh lines appeared at the corners of the man’s eyes. “You don’t know, Miss Emilie?”

Her heart skidded to a stop. How did he know her name? Throat constricted, she shook her head.

Nathan surveyed the scene at WestOne Bank on Fremont Street. A swell of nosy assholes pressed against the yellow crime tape as annoyed officers repeatedly warned the spectators to back off. Most used their cellphones to record the drama with little thought to the helpless souls trapped inside. The blazing Nevada sun had been relentless all day, and the air was ripe with the smell of sweat, dust, and the Chinese restaurant a block east. Car horns blared in the distance as drivers displayed their irritation at being re-routed.

Surveillance continued to work on getting a wireless camera inside via the air ducts but so far had come up empty.

“We don’t even know if there are casualties,” said the lieutenant in charge. “There’s been no response.”

Nathan took the megaphone from the lieutenant. “This is Nathan Madigan. I’m a hostage negotiator. I want to help you. You need to answer the phone so we can get you out of there safely.”

He pushed ‘send’ on the department-issued cellphone and settled in for the wait. Fifteen rings later, he picked up the megaphone again. “If you don’t talk to me, you’re going to be at the mercy of the police. The only way your demands will be considered is to pick up that phone.”

Dead air and then a gruff voice came over the cellphone. “I’m in charge here, not you, got it?”

“Absolutely.” Nathan handed the megaphone to the lieutenant.

“Where you at? You all look the same out there.”

“With the black hair? You look like a kid. How old are you?”

“Twenty-eight.” Nathan shaded his eyes with his hand to combat the sun reflecting off the bank’s front windows. Someone peeped through one of the blinds on the far left. “What’s your name?”

“What’s it going to take to bring this to a peaceful end, Joe?”

“Me walking out of here with my money.”

“What about your partner?”

“What are your demands?”

What an amateur. Either the partner was the mastermind behind the plot or Joe had gotten lucky.

“That’s going to take some time,” Nathan said. “As a show of good faith, can I talk to the branch manager?”

“Why the hell do I gotta show you good faith? I’m doing you a favor just by talking to you.”

“Because I’ve got to convince the people in charge to help you out. Letting me talk to the branch manager will make you look cooperative.”

Nathan waited. Joe needed to believe he called the shots.

Static crackled in his ear as Chris’s voice came over the mic. “Tech found a vent opening on the west side. They’re setting up the camera now.”

“Hello?” A soft female voice came over the line.

“Emilie, my name’s Nathan Madigan. I’m a hostage negotiator. Is anyone inside injured?”

“Did you get a look at either of the men, Emilie?”

Backwoods by sara12356
Gloria's Revenge by L'Amour, Nelle
Inside of a Dog: What Dogs See, Smell, and Know by Alexandra Horowitz
Shaman - the Awakening by Vr McCoy
The Lost World of the Kalahari by Laurens Van Der Post
Amanda in Alberta: The Writing on the Stone by Darlene Foster
So Over My Head by Jenny B. Jones
the maltese angel by Yelena Kopylova
Strontium-90 by Vaughn Heppner
Money Never Sleeps by Whitelaw, Stella