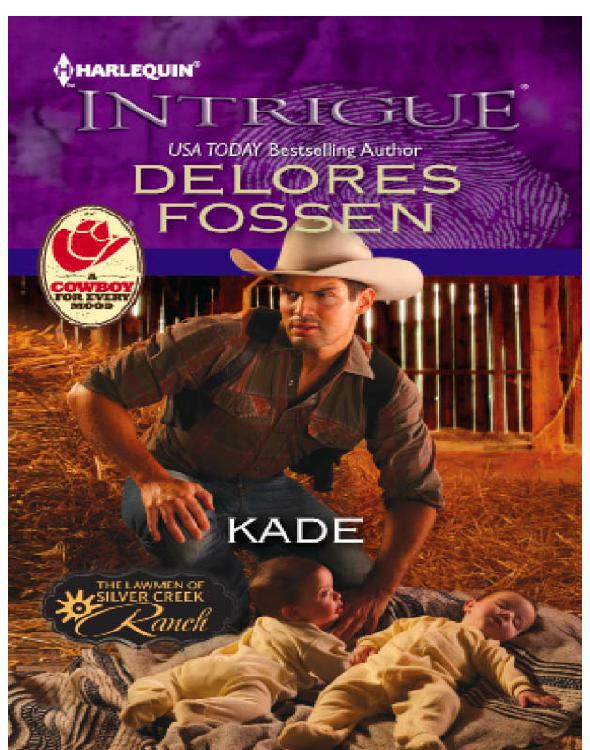 The baby in the hospital was Kade’s. The mother was still missing.

One look at the baby girl, and there was no question Kade Ryland was the father. For three months, Kade had posed as Bree Winston’s husband at the Fulbright Fertility Clinic, while the two FBI agents investigated a trail of illegal adoptions and surrogates. Nine months later, a baby was dropped at his feet—and Bree was nowhere to be found. Now Kade had to reopen a case that had gotten way too personal and find Bree—fast. But if the two of them had never been a real couple, were they ready to be parents? Whatever the answer, Kade now had more than one reason to close this case once and for all.

This was his baby. His little girl.

He felt the punch, and it nearly robbed him of his breath. The doctor was right. He should have sat down for this.

The love was there. Instant and strong. Deep in his heart and his gut, he knew the test had been right.

Even though he’d had no immediate plans for fatherhood, that all changed in an instant. He knew he loved her, would do whatever it took to be a good father to her. But he also knew she’d been abandoned. That left Kade with one big question.

Where was her mother?

Imagine a family tree that includes Texas cowboys, Choctaw and Cherokee Indians, a Louisiana pirate and a Scottish rebel who battled side by side with William Wallace. With ancestors like that, it’s easy to understand why
USA TODAY
bestselling author and former air force captain Delores Fossen feels as if she were genetically predisposed to writing romances. Along the way to fulfilling her DNA destiny, Delores married an air force top gun who just happens to be of Viking descent. With all those romantic bases covered, she doesn’t have to look too far for inspiration.

Special Agent Kade Ryland—
When his undercover assignment at a shady fertility clinic ends, Kade thinks both the job and the hot attraction are finished for him and his undercover partner. But nine months later, he learns they’re the parents of a newborn baby girl.

Special Agent Bree Winston—
She’s a deep-cover operative who considers herself married to the job, but she must risk everything to save Kade and their daughter.

Randy “Coop” Cooper—
Bree’s boss and mentor, but there are rumors that he’s on the take and could be responsible for the danger to Kade and Bree.

Hector McClendon—
Former head of the Fulbright Fertility Clinic. He’s possibly the man who wants Kade and Bree dead so they can’t testify against him at his upcoming trial.

Anthony McClendon—
Hector’s son, he’s under investigation for his part in the illegal practices at his father’s fertility clinic.

Jamie Grier—
She was a nurse at the now infamous fertility clinic, but she claims she’s an innocent woman.

Special Agent Kade Ryland raced up the steps of the Silver Creek hospital. Whatever was going on, it was bad. No doubt about it. The voice message from his brother had proven that.

Get to the hospital now,
Grayson had ordered.

Since his brother Grayson was the sheriff of Silver Creek, it couldn’t be good news. Nor was the fact that Grayson wasn’t answering his phone—probably because he was in the hospital, a dead zone for reception.

Kade prayed that someone wasn’t hurt or dead, but the odds were that’s exactly what had happened. He had four living brothers, three sisters-in-law, two nephews and a niece. Since all his brothers were in law enforcement and one of his sisters-in-law was pregnant, there were lots of opportunities for things to go wrong.

The automatic doors swished open, and he hurried through, only to set off the metal detector’s alarm. Kade mumbled some profanity for the delay. He’d just come from work and was still wearing his sidearm in a shoulder holster concealed beneath his jacket. He also had his backup weapon strapped to his boot. He didn’t want to take the time to remove either of them.

The uniformed guard practically jumped from the chair where he was reading a battered copy of the
Silver Creek Ledger.
His name was Rowdy Dawkins, a man that Kade had known his whole life. But then Kade could say that about half the town.

“The sheriff’s waiting for you in the e
mergency room,” Rowdy said, waving Kade through the metal detector. His expression was somber. His tone dripped with concern.

Kade didn’t even take the time to ask Rowdy for details, though the man no doubt knew what was going on. He didn’t just hurry—Kade ran to the E.R. that was at the other end of the building. The hospital wasn’t big by anyone’s standards, but it seemed to take him an hour to reach the E.R. waiting room.

No sign of his brother or any other family member.

Kade’s heart was pounding now, and his mind was coming up with all sorts of bad scenarios. He’d been an FBI agent for seven years, not nearly as long as his brothers had been in law enforcement, but that was more than long enough to fuel the worst sort of details about what could be wrong.

“Your brother’s in there with Dr. Mickelson,” a nurse volunteered as she pointed the way. She, too, gave him a sympathetic look, which meant he was probably the only person in the whole frickin’ town who didn’t know what the heck was going on.

Kade mumbled a thank-you to her and hurried into the doctor’s office, the first door in the hall just off the waiting room. He tried to brace himself for what he might see, but he hadn’t expected to find everything looking so…normal.

Grayson was indeed there, standing, and looking fit as a fiddle as his granddaddy Chet would have said. He looked as he usually did in his jeans and crisp white shirt with his badge clipped to his rodeo belt.

Dr. Mickelson, the chief of staff, was there, as well, practically elbow to elbow with Grayson. Nothing looked out of the ordinary for him, either. The two had obviously been expecting him.

“I was in the middle of an arrest when you phoned,” Kade started. “That’s why your call went straight to voice mail, but I tried to get in touch with you after I got your message. I tried your office, too, and the dispatch clerk said her orders were for me to speak directly to you. What’s wrong? Who’s hurt?”

“No one’s hurt,” Grayson said, but then he wearily shook his head. “At least no one that we know about.” He stepped closer and looked directly into Kade’s eyes. Ice-gray eyes that were a genetic copy of Kade’s own.

“What do you mean by that?” Kade asked.

Grayson and the doctor exchanged glances. “You’d better sit down. We have something to tell you.” The doctor tipped his head to the chair next to his desk, which was cluttered with folders, computer equipment and papers.

The one thing Kade didn’t want was to sit. “Does someone in the family have cancer or something?”

Or God forbid, had there been a suicide? It wasn’t something the average person would consider high on their list of worries, but since his own mother had committed suicide when he was barely eleven, it was never far from Kade’s mind.

“No one has cancer,” the doctor answered. He flexed his graying eyebrows, but he didn’t add more.

Like the security guard, Kade knew Dr. Mickelson. The doctor had been the one to deliver him thirty-one years ago, but Kade couldn’t read the doctor as well as he could read Grayson. So, he turned to his brother.

“Tell me what happened,” Kade pushed.

Grayson mumbled something under his breath. “I would if I knew where to start.”

“The beginning’s usually a good place.” Kade’s stomach was churning now, the acid blistering his throat, and he just wanted to know the truth.

“All right.” Grayson took a deep breath and stepped to the side.

Kade saw it then. The clear bassinet on rollers, the kind they used in the hospital nursery.

He walked closer and looked inside. There was a baby, and it was likely a girl since there was a pink blanket snuggled around her. There was also a little pink stretchy cap on her head. She was asleep, but her mouth was puckered as if sucking a bottle.

“What does the baby have to do with this?” Kade asked.

“Everything. Two days ago someone abandoned her in the E.R. waiting room,” the doctor explained. “The person left her in an infant carrier next to one of the chairs. We don’t know who did that because we don’t have security cameras.”

Kade was finally able to release the breath he’d been holding. So, this was job-related. They’d called him in because he was an FBI agent.

But he immediately rethought that.

“An abandoned baby isn’t a federal case,” Kade clarified, though Grayson already knew that. Kade reached down and brushed his index finger over a tiny dark curl that peeked out from beneath the cap. “You think she was kidnapped or something?”

When neither the doctor nor Grayson answered, Kade looked back at them. Anger began to boil through him. “Did someone hurt her?”

“No,” the doctor quickly answered. “There wasn’t a scratch on her. She’s perfectly healthy as far as I can tell.”

The anger went as quickly as it’d come. Kade had handled the worst of cases, but the one thing he couldn’t stomach was anyone harming a child.