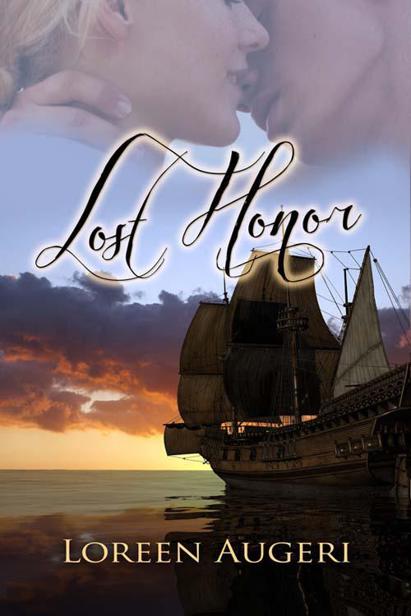 To my two lovely daughters.

This book is for you.

“Let go of me.” Arianna tugged against the hand wrapped around her wrist, but the burly seaman’s fingers refused to loosen as he dragged her across the wooden planks. “Take me to Captain Pemberton.”

Her captor pounded on the door wavering before her.

The deckhand threw open the door to the cabin. “Will a Captain Danvers do?” Shoved by powerful hands, she fell to her knees before booted feet. “Found her in the hold, Cap’n. Thought she was a boy at first, her wearin’ pants and a cap, but she has tits.”

Arianna followed the shiny boots up to tight-fitting, brown breeches hugging muscular thighs, and slim hips. A loose, white shirt covering broad shoulders next met her gaze, then a corded neck, square jaw, stern lips, crooked nose, and cold, dark eyes that stared down at her. “Where’s my brother? Who are you?”

“I will be asking the questions. Who are you, and why are you on my ship?” The deep voice thundered through the cabin.

Her stomach flip-flopped. Dizziness swamped her. Swallowing convulsively, she battled to contain the contents of her queasy stomach. Hiding in that empty molasses barrel hadn’t been the brightest idea of her twenty-one years. “I’m not talking to anyone but my brother.”

Jurgens’s forceful hands yanked her to a standing position. “You answer the cap’n.”

The abrupt movement snapped the fragile control she clung to. Spasms seized her throat. Arianna struggled to turn away, but the fingers digging into her arms held her in place. The contents of her stomach erupted.

All over Captain Danvers’ boots.

Her captor released her and jumped back in horror.

She swayed. A wooden chair crashed against the backs of her legs, and she fell onto the hard seat with a plop. The heat of embarrassment swept up her neck and into her face.

“Jurgens, get something to clean up this mess.”

This wasn’t going at all as planned.

The impassive man before her tapped the toes of his soiled boots one at a time on the wooden floor to dislodge what she deposited there. Arianna closed her eyes and groaned. She had never done anything this humiliating.

Well, that wasn’t quite true.

“Are you going to be sick again?”

Arianna lifted one lid a fraction of an inch. Peeking through the slit, she found a wet cloth dangling by a finger before her. She shook her head and then jerked to a stop before the dizziness reappeared. “No.”

Grabbing the cloth, she fixed her gaze on the opposite wall as she cooled her face and cleaned her mouth. She couldn’t meet those hard eyes as dark as a moonless night.

“I have never been seasick in my life. I am a terrific seaman.”

“Then what’s wrong? Should I summon the surgeon to examine you?”

“I am fine.” She started to rise with what dignity she still possessed.

The commanding voice and the powerful hand pushing her back onto the chair convinced her to remain where she was. Even though she chafed at the order. Men had dictated what she could and could not do her entire life. Her papa she obeyed, mostly. Her five older brothers were another matter.

“My boots tell a different story.”

He stepped in front of her, blocking her view of the wall. Plain white and boring. His thighs on the other hand were more interesting. But intimidating.

A hand beneath her chin forced her face up to where his piercing eyes delved into hers. “What is wrong with you, and what are you doing on my ship?”

No sympathy, concern, or curiosity. Just a question he expected to be answered.

As her stomach settled, a terrible feeling that she had made an awful mistake slithered through her. “What is the name of this ship?”

“You are avoiding my question, again.”

Frustrating silence filled the distance between them as he seemed to debate whether to reply before she gave him the information he waited for.

Arianna jumped to her feet. Fear and panic raced through her. This wasn’t her brother’s ship. She didn’t know this man standing before her, or the crew. “I’m not supposed to be here.”

“That much I know. Now I have answered your question, I expect an answer to mine.”

“You must return to the dock.”

She wasn’t to be found by her brother’s men until two days into the voyage. By then, it would be too late to return to England. Thomas would have been forced to let her stay and help sail the ship. The man called Jurgens had discovered her shortly after they left. They couldn’t be far from land.

“You are on this ship now, and here you will stay.”

“But I am on the wrong ship. Turn back.” She paced across the airless cabin. How had this happened? The barrel she had hidden in was to be loaded on the
Midnight Star
.

He grabbed her arm and swung her around to face him, his face devoid of emotion. “I have a schedule, and I will not upset it to please you. This is your mistake. You will deal with it.”

He sounded like her papa. She curled her fingers into fists and tensed her arms to prevent herself from lashing out. Someone knocked on the door, and she spun toward it.

“Mark is here to clean your cabin, Cap’n.”

Arianna shoved her way past the startled men and boy. She had to return to shore.

The authority within his words skimmed over her as she jerked the blue wool cap that covered her blonde hair over her ears and flew down the corridor, up the ladder, and onto the main deck. The fresh smell of the sea air reassured her, as did the land on the horizon. She had to reach it.

Men stopped their work and stared as she dashed toward her salvation, the jolly boat carried at the stern.

She didn’t need to see who spoke the words. The tone was unmistakable. Agile and quick, she evaded the hands that lunged at her. She had learned the tactics for survival when she aggravated and teased her brothers one too many times. Feet pounded behind her. She wouldn’t have time to lower the boat. She gauged the distance to shore. She was a strong swimmer, but even she couldn’t swim that far.

Arianna raced to the ratlines and started to climb.

Morgan Danvers stared at the fleeing woman traversing the rigging like a seasoned seaman. Bloody hell, he didn’t need this kind of problem now.

Who was she? What was she doing on his ship? What was he going to do with her? He couldn’t return her to shore. He couldn’t spare the precious hours. His brother’s life dangled on a precarious line between life and death.

He had a feeling trouble trailed her wherever she went. Morgan glanced down at his feet—already she had ruined a perfectly good pair of boots—and then up at her. She did possess a great backside. The muscles in her rear bunched and contracted as she lifted each leg and then lowered it to the next tar-coated rope. He glared at the men on deck ogling her and at the others scurrying through the rigging after the stowaway.

Women on a ship brought nothing but disaster. He couldn’t allow her to run free. She would cause a mutiny or instigate fights. He had seen it happen before. He could vouch for most of his men. They had sailed with him when he fought for the United States as a privateer. But not all of the former crew was available for his rescue mission, and he had been forced to hire on outsiders unknown to him.

Her nimble feet and agile hands scaled the ratlines in mere seconds. Reaching the maintop platform, she fended off males who struggled to capture her. He pictured her tumbling through the air and imagined her broken body splattered on the pristine deck.

The Panther's Surrogate: A Paranormal Pregnancy Romance by Foxxe, Angela
When Fangirls Lie by Marian Tee
The Letters by Suzanne Woods Fisher
Not Looking For Love: Episode 2 by Bourne, Lena
Cyndi Lauper: A Memoir by Lauper, Cyndi
Stranger by the Lake by Wilde, Jennifer;
The Prince She Had to Marry by Christine Rimmer
The Grail Murders by Paul Doherty
A Texas Family Reunion by Judy Christenberry
The Leopard by Jo Nesbo