Read Love in a Nutshell Online

Love in a Nutshell 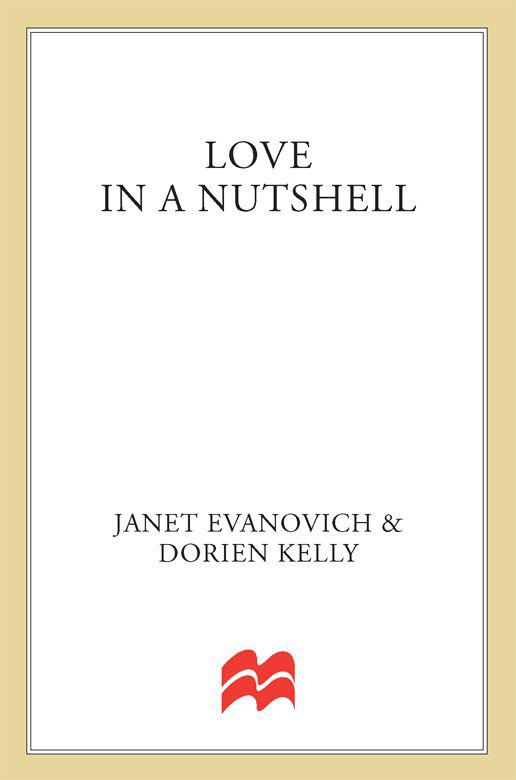 IN LOVING MEMORY OF BUBBA GIMP, THE COOLEST SPECIAL NEEDS COONHOUND TO WALK THIS EARTH. AND ALSO OF CEILI, HIS WONDERFUL WESTIE MAMA DOG. THERE WILL NEVER BE ANOTHER PAIR QUITE LIKE YOU!

Actually,
need
didn’t come close to describing the hunger and sharp bite of desperation speeding her steps across Depot Brewing Company’s parking lot on that crisp October afternoon. Just as the town marina to the right of the microbrewery was growing empty of boats, Keene’s Harbor, Michigan, was growing empty of tourists and their cash. And, at this moment, Kate needed cash. She had moved to Keene’s Harbor a couple of weeks ago, eager to change her parents’ dilapidated lake house into a thriving bed-and-breakfast. They had moved to Naples, Florida, and the harsh reality was that it hadn’t been used in years, except as a nut storage facility by a family of industrious squirrels. Ironic, since a homemade plaque proclaiming the house “The Nutshell” had adorned the front entrance since before she could remember.

In any event, the house needed a lot of work, and her parents were less than enthusiastic about pumping tens of thousands of dollars into a home that was already underwater on its mortgage. To make matters worse, they’d gotten a letter from some lawyer last week that the bank had gone into bankruptcy and the mortgage had been sold to some private investor. He’d offered to release Kate’s parents from the debt in exchange for the property. It was actually a fairly generous offer, considering the market, but Kate was trying to build a life for herself in Keene’s Harbor. And dammit, her family home wasn’t for sale. Depot Brewing wasn’t just Kate’s last shot at employment. It was the last shot at her dreams.

CRIMSON MAPLE
leaves crunched beneath her leather boots as she marched toward the handsome yellow brick and sandstone building and checked off her plan of action. She would be firm, yet polite. Honest, yet not to the point of over-sharing. And she would go straight to the top, to the guy who could make her, or— Forget that. She wouldn’t consider the possibility of someone breaking her. And she wouldn’t consider walking away without a job.

Kate drew in a breath, pulled back her shoulders, and wrapped her hand around the hammered-bronze door handle of her new workplace.

MATT CULHANE
sat holed up in his small and admittedly cluttered office behind Depot Brewing Company’s taproom. He wanted one last look at his inventory spreadsheet before the after-work crowd showed up. Not that he begrudged his customers their fun, but he should have chosen to stay put in his dungeon of an office in the back of the microbrewery rather than move into the portion of the building housing the newly constructed but noisy restaurant. He was deciding whether to work out a trade with one of his brewer buddies for some Chinese hops when he heard Jerry, his hospitality manager, greet someone in the taproom.

“Is Matt Culhane in?” a woman asked Jerry. “I need to talk to him. His office is in the back, right?”

“Thanks so much for your help,” the woman replied. “I can find my way.”

Kate knocked once on the open door and swept into the office, closing the door behind her and leaving Jerry standing on the other side openmouthed and clearly flustered.

Culhane’s first thought was that she was a woman on a mission. His second thought was that he was intrigued. She was just over five feet tall, and had short-cropped blond hair, big hazel eyes, and a wide mouth that he suspected would light up a room when she smiled.

Matt rose, rounded his desk, and extended his hand.

Kate took his hand and gave it a firm businesslike shake. “I know. I’m Kate Appleton. I don’t have a job. And it’s your fault. Twenty minutes ago, I was fired because of you.”

“Yep. From Bagger’s Tavern, down on Keene Avenue. It was all because of your skunky beer.”

Before he could respond, she planted herself in the one guest chair that didn’t have files stacked on it.

Cute but crazy, Matt thought, following her lead and returning to sit in his chair behind his desk. And oddly enough, it did nothing to diminish his attraction to her. “Harley fired you?”

“Apparently, I’m no longer to be trusted behind the bar, because bad beer passed from tap to lips. I don’t think that’s fair. And when I look at the whole mess, I figure it’s your responsibility. It was your beer,” she replied in a patient tone. “I moved to Keene’s Harbor three weeks ago and lobbied like crazy to get even that part-time bartending job. Then I lost it over bad beer. Now I have nothing. Every store downtown is owned locally, and every owner runs their place alone in the slow season.”

Matt smiled. “That’s to be expected. A town built to hold several thousand summer visitors can be pretty empty come the cool weather. Why’d you move here in the off-season?”

“Well, let’s just say my options were extremely limited. I needed an inexpensive place to stay, and the mortgage payments on my parents’ lake house are a heckuva lot less than any decent rental.”

Actually, she was a few months behind on the payments. Between her crapola job at Bagger’s and the endless repairs on the house, her savings were pretty much gone. She’d talked to the bank and they’d agreed to let her catch up over the next six months, but that was before they’d gone belly-up. Kate drove the thought from her mind, replacing it with the happy memories that had inspired her to move to Keene’s Harbor in the first place. “I’d spent summers here as a kid and loved it. I thought I could come up with some sort of job.”

Apparently, she had some history around town, and she also looked to be in the general ballpark of his age. Still, it was no surprise their paths hadn’t crossed earlier. He’d stuck with his townie pack. In his high school days, the summer girls weren’t worth the snobbishness some of them had thrown at the locals while sunning on Lake Michigan’s long stretch of beach.

“So you’re a summer person,” he said. He wasn’t into line-drawing anymore, but he couldn’t resist teasing just a little, trying to provoke the same little flush of emotion to her cheeks he’d seen when she first walked into his office.

“Thanks, but I think of myself more as a Citizen of All Seasons.”

“Works for me. Where’s your parents’ place?”

“It’s on the lake about two miles north of town. It’s old, big, and drafty. And it’s a huge money pit, which brings us back to the aforementioned skunky beer,” she said, obviously trying to drive the conversation to a set destination.

Matt was curious enough to give her the room to run. “I’ll agree that Harley serves my beer, but I’m not going any further than that. The keg could have been bad for a lot of reasons, including dirty tap lines, bad tapping, or the fact that it was past its expiration date. But the bottom line is that I didn’t tell him to fire you.”

“Just the same, honor compels that you give me a job.”

Another surprise bombshell. “A job?”

Lucky me, he thought. The woman was clearly crazy, and yet strangely appealing in her overly earnest, convoluted reasoning.

“Supposing, for the sake of discussion, that we were hiring right now,” he said. “Other than a couple of weeks at Bagger’s, what’s your work experience?”

She folded her hands in her lap, a gesture more appropriate for a navy blue interview suit than jeans and a puffy, off-white down jacket still zipped up to her chin. He wondered what she was going to wear when it
really
got cold around here.

“I have a B.A. in Drama from a small college in Ohio.”

This time he couldn’t fight back a smile. “I didn’t ask about your education. I asked what you can do. Before you came to Keene’s Harbor, did you have a job?”

He waited for more, but it didn’t appear to be coming.

“I was an assistant editor at a business magazine headquartered downstate, outside of Detroit.”

“And?” he prompted again.

“As you said, with very little in the way of options. What happened to the job?”

“The skills aren’t relevant to what you do here, but if you really need to know, I was let go.”

“It wasn’t directly performance-related, so again, I don’t think it’s all that relevant.”

He was hooked. He had to know. He was sure it was something worth hearing.

Kate bit her lower lip. “I had a little incident changing the black ink cartridge for the printer I shared with a couple other people. Maybe it was because we’d switched to a generic brand, or maybe it was because someone—perhaps with the name of Melvin—had messed with it, but whatever the case, I got ink all over the front of my dress. And then while I was in the bathroom trying to soak what I could from the dress, the fire alarm went off.”

“Sounds like something you’d see on Cinemax after midnight.”

“Let’s just say that when presented the choice between potential death and a bit of semi-nudity smack in the middle of downtown Royal Oak, I let the skin show.”

“You didn’t have much of an option.”

She raised her right shoulder in a half shrug. “True. As it turned out, someone—perhaps with the name of Melvin—had pulled the fire alarm. There was no fire, but between the scene on the street and the fact that the video from the building’s security camera somehow hit the Internet and went viral, my boss let me go. He said I had become a liability to the magazine. No one could take me seriously. And so someone with the name of Melvin got my job.”

Kate nodded in agreement. “It did. But I learned a few good lessons, including always use brand-name ink and watch out for guys named Melvin.”

Matt laughed. Kate Appleton might be an involuntary exhibitionist, but so far she’d shown herself to be smart and quick with an answer, and she wore her emotions on her face. His gut told him she was possibly a little nutty, but beyond that a decent person. And Matt generally went with his instincts.

He leaned forward, elbows on desk. “I’ll start by saying that the bad beer at Bagger’s was a problem on his end of the system. Granted, there’s a remote possibility it happened here, but that part of the process is under tight control, so I’m not talking to you to redeem my honor or anything like that.”

She nodded. “Okay. So long as the talk involves a job, I’m listening.”

Kate Appleton did not appear to be a believer in the theory of leverage, in that he had it and she did not. Still, she was bold. He appreciated that about her. And, at the moment, she might just be exactly what he needed.

“There have been some incidents over the past few months,” Matt said, lowering his voice. “They didn’t start out as anything big or all that awful. In fact, for a while there, I just kind of put it down to a streak of bad luck.”