Read Mine to Fear Online 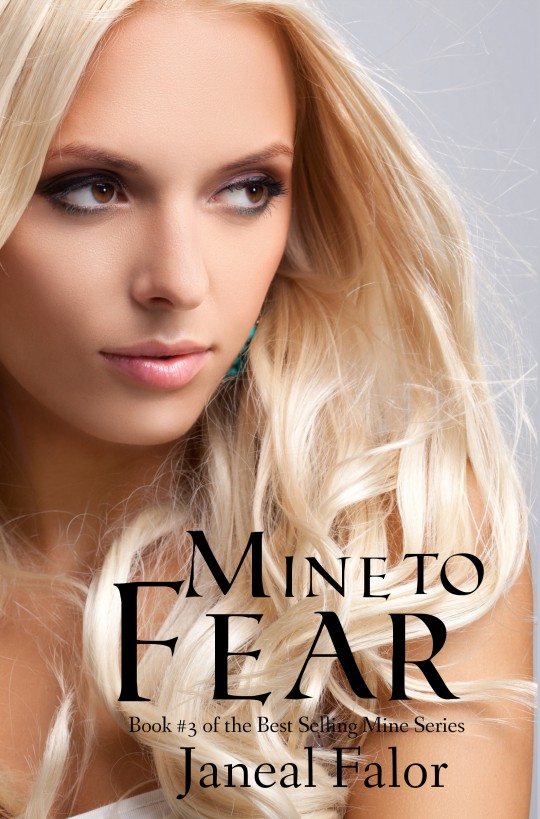 This ebook is licensed for your
personal enjoyment only. This ebook may not be re-sold or given
away to other people. If you would like to share this book with
another person, please purchase an additional copy for each
recipient. If you’re reading this book and did not purchase it, or
it was not purchased for your use only, then please purchase your
own copy. Thank you for respecting the hard work of this
author.

To learn more about this author, please visit:
www.janealfalor.com

Other Books in the Mine Series

Mine to Tarnish
(Mine
Prequel)

Sacrifice of Mine (Mine #4)

and an even better cousin

B
eing in
Envado when those I care for the most are stuck in Chardonia makes
me want to spit. What terrors are befalling them while I'm here,
unable do anything to help? Cynthia is being hidden by our rebel
group. Serena is living alone, away from her sisters and mother who
are once again owned by her father.

I'd like to think at least my brother
Zade and Serena are happy now that they're engaged, but knowing
they could have gotten
engaged just a little sooner
while I was there to witness it? It makes me want to spit again.
And to make things even worse, Zade's previous fiancée arrived here
for a visit this morning. Unfortunately, I did witness her
engagement, which makes it all the more awkward.

What's worse is that Zade's previous
fiancée doesn't know about Serena and Zade. I need to tell her that
he chose a girl Zade formally owned over her. He didn't just give
Serena her freedom, but he gave her his heart. While the two
fell
in love, Cynthia proved to everyone at the
tournament she can do magic, and do it well. Maybe it'd be easier
if I wasn't such close friends with both Serena and Zade's previous
fiance. It's dreadful this is much too formal of a setting as my
mother's entertaining room to sp
it. Plus,
my mother is here, and she wouldn't put up with it.

“
I'm so glad you came to visit.”
Th
e
words are true enough,
though they would be even more heartfelt if she already knew about
the engagement.

“
I should have come sooner,” Tawny
says. “I'd like to use my duties as an excus
e for not coming
, but really, I just didn't know
how long it would take you to adjust to returning home. With the
things they say about Chardonia it must be a challenge.”

I'll never adjust. This no longer feels like
home, even though it's safer.

“
It was very thoughtful of you to take
time away, Tawny.” Mom fills my silence, pouring sincerity into her
words. Since my return from Chardonia last week, she knows what a
pest I have been.

“
How was Chardonia?” Tawny's question
is sure to make Mother cringe inside, even if she doesn't show it.
“Were the men as bad as everyone says?”

“
No. They were worse.” Which is why I
should be there, helping, instead of here having tea and biscuits
in a room with pictures spelled with sparkles and a floor spelled
to stay cushioned and warm.

“
Will you tell me about it?” Tawny
presses.

Except Tawny. She seems different,
even if her question is the same. There's a glint in her eyes as
she holds herself as if ready to jump up for a fight instead of
leaning in to pick up every word to pass onto others. It would be
like her. She always was ready to take action when others just
wanted to talk. Perhaps it's time to really tell someone about what
things are like. Lands know
I'm well past wanting
to.

“
Mom, would you mind asking Cook to
make those new treats she's learned? I'm sure Tawny would love to
try them.”

“
Wonderful idea, dear. I need to check
on your father anyway.” She brushes a kiss to my forehead,
something she's done much more often since my return. “I'll see you
again soon, Tawny. Send your mother my regards.”

Once the door closes behind my mom, I grin
at Tawny. “Mom always did like you.”

“
I think she's still hoping Zade will
come back for me.”

Discussing the state of Chardonia is much
more preferable to this. “And is that what you want?”

She looks at her hands. “I don't know.
We grew up together. We always thought we were destined to be
married. It's almost expected. But since he wrote to break off the
engagement… Mom isn't taking it well. Dad seems
t
o
have expected it,
though.”

That doesn't answer my question about her,
though. It's the perfect time to tell her about Zade's engagement.
“Chardonians are horrid,” tumbles out instead.

“
The warlocks treat the women worse
than animals and those who have been tarnished, people who are
spelled to be bald, inked, and barren.
Then the women
who they want to discard or men that have little to no magic, are
taught to believe they aren't even people. They're just tools with
brain
s
.”

“
Could you do anything to
hel
p
?” Her eyes grow bright
with interest.

“
Not nearly enough.” The words feel so
good to get out. “Just trying to get the women to understand their
worth was a chore. I wish I was still there helping them figure it
out.”

“
It does sound like something worth
doing.” She glances up shyly and in a whisper says, “Something I'd
like to help with. Not just here yammering about things, but over
there making a difference.”

Shock courses through me. I would have never
guessed she would have an interest in such things. “Would you
truly?”

The room is silent as I think about
that. What would Tawny’s parents say? Her mother, the Queen, would
likely not want her daughter, the third in line for the throne, in
harm’s way. It would
probably be my head on the
chopping block since I brought the idea back with me from
Chardonia.

Tawny breaks the silence. “Mother wanted to
make certain your family got the invite to the ball this
evening.”

I'm still lost on the idea of her wanting to
help in Chardonia. Mother would want me to accept the invitation
even though I'd rather stay home and father is still too weak to
leave. “Thank you. We did and would be delighted to attend.”

After Tawny leaves, I remain in the
sitting room staring at nothing, wondering what to do, if anything,
about Tawny's declaration. Not that I can even be in Chardonia like
I want to, though, so I don't know why I'm contemplating anything
to do with her declaration
.
There's no way she could go. Besides, Zade would have my
head.

“
Are you pining for Chardonia or for
Chadwick?” Mom's question startles me from the thought.

“
That's not even a
question.”

I don't have the heart to tell her
it's definitely only one. Though I do miss
Chadwi
ck,
it's not the way
she means. At least I don't think it is...

“
I accepted the invitation to the
Queen's ball this evening,” I say.

“
Oh good. It's been too long since
Queen Brundy and I chatted. When I saw Tawny, I was hoping her
mother had joined her. I suppose she's busy with government,
especially with all the growing political problems with
Chardonia.”

“
I'm certain she is.” New rumors
spread everyday, and it quickly feels like I've lost touch with
those I care about. The border closures are getting tighter. The
watching, even the lower class, is stricter. The hunt for the
rebels is vigorous. There hasn't even been word from Cynthia. Why
hasn't she spelled me a message to let me know if she's safe? Have
they caught her and Lukas?

As I enter my room, it just makes me
long for a room back in Chardonia, whether one of the cramped ones
or big, it wouldn't matter. At least in Chardonia I was not only
helping but I gained freedom from the expectations set on me here
in Envad
o
. Of marrying and
becoming a woman of taste and elegance. Of course, those
expectations are nothing compared to what the women in Chardonia
face, and they still don't even realize how bad it
i
s
. The horrors of being
beaten and hexed by men who owned them. If I could bring them all
here for a month, maybe then they'd begin to understand.

Going there was the best
choic
e
I ever made. After
Zade freed Serena and Cynthia showed everyone that women could not
only do magic but win the entire tournament with it—me doing a few
magic spells when no one was looking and helping with simple chores
there doesn't seem like enoug
h
. I want to be more. I want to do more. I want
to make a difference.

Instead, I'm going to a ball.

Gee, what good am I
doin
g?
If only Sanos, the
rebel group secretly aiding Chardonia, would have let me help. They
should have at least sought my opinions instead of just rumor
digging like everyone else. If only they didn't see me as a
liability because I wasn't as trained as they were, thanks to Zade
and Chadwic
k trying to protect
me
. I shouldn’t be home while they're in Chardonia
helping. Just thinking of it makes me wish Zade was around to argue
with.

I still can't believe they sent me home.

T
he ball is
more lavish than others I remember attending. Spells are
everywhere, sparkling, dancing, swishing across the room in the
form of birds and butterflie
s
. Drinks are flaring up like fireworks. Dresses
are changing colors and styles. Men's suits are too. It used to
impress me, but now it'
s
a
waste. Don't these people realize what's going on just across the
border?