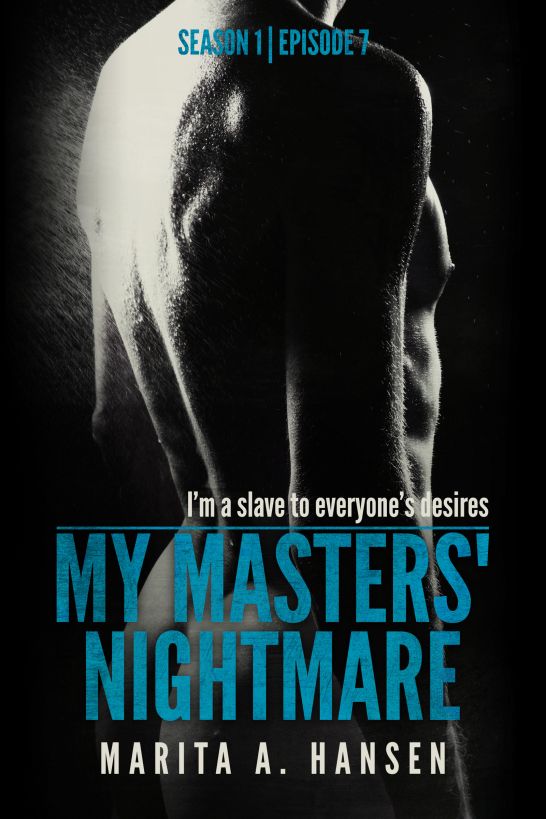 Like a television series,
My Masters’ Nightmare
is broken up into seasons and episodes. A new
episode will be published approximately every 3 weeks until a
season has ended. There will be fifteen episodes per
season.

Other Books by Marita A.
Hansen

All
rights reserved. No part of this book may be reproduced, stored in
a retrieval system, or transmitted, in any form or by any means
whatsoever without the written permission of the author, nor
circulated in any form of binding or cover other than that in which
it is published. Thank you for respecting the hard work of this
author. For subsidiary rights inquiries email:
[email protected]

All
characters, names, places, and incidents in this book are either
the product of the author’s imagination or are used fictitiously,
and any resemblance to actual events, locales, or real persons,
living or dead, is entirely coincidental.

I would like to say a big thank you to my beta reading team
for this episode:

Your help is greatly
appreciated.

Frano
starts training his two slaves, using Camila as a tool to
get Rita to do what he wants. However, his mind keeps returning to
Alberto, his guilt over killing his brother overshadowing
everything. At Alberto’s funeral his guilt is amplified, but is cut
short by a gun attack.

When
Matteo
fails to shoot Frano, he heads to a market
that Thierry frequents. He wants to use Jagger’s younger brother to
get to the D’Angelos, but discovers Thierry is being protected by
Landi soldiers. As a consequence, Matteo formulates a way to get to
him through the Landi sisters.

After
Frano
returns home, Camila offers him a
profitable deal he cannot refuse, even though it means he has to
marry her. He agrees, allowing Camila to leave the slave cell. Once
she is gone, he returns his attention to Rita, who he discovers is
Sophia Salvi. He is stunned, but still plans to marry Camila, which
angers Rita/Sophia. An argument ensues that ends with Frano being
knocked unconscious by Jagger, who walks in, mistakenly thinking
Rita is being raped.

I
didn’t know what to do or how to calm
Jagger down. He was gripping onto a chair while yelling at Rita to
get off the Don. The FBI agent was lying on top of the injured Don,
trying to shield him from Jagger. I couldn’t tell whether he was
unconscious or dead, the blood coming from his head flowing too
freely.

“
Get off him!”
Jagger yelled
again. With his messy black hair and drug-addled eyes, along with
his enraged face, he looked like a wild man. Earlier, when I went
to get his meal, he had ingested a cocktail of drugs, leaving the
evidence on the bathroom sink. I’d found him lying on the floor,
screaming at an imaginary Alberto to get off him. I had tried to
assure him that Alberto was dead, but he’d pushed me aside and
rushed for the door, babbling about Sophia’s sister. I didn’t have
a clue what he was talking about, but I knew I had to stop him
before he hurt himself. Unfortunately, he’d been far too quick for
me, barreling down the staircase like a man possessed.

“
Why are you protecting
him?”
Jagger
shouted at Rita.

“
Because I care about him,” she
replied.

“
You can’t possibly give two
shits about him.”

Rita looked even wilder than Jagger, with
her tangled brown hair, her crazy eyes, and blood splattered hands.
I was worried she would attack Jagger if he didn’t do as she said,
because every muscle in her body was tensing for a
fight.

The fear of Jagger
getting hurt pushed
me forward. I ran in front of him, extending my hands. “Give me the
chair, Jagger,” I said.

His
eyes shifted to me, or tried to,
because they were moving all over the place. He shook his head,
looking like he was attempting to regain focus. “I don’t
understand,” he said, appearing confused. “Why would she protect
him? He was raping her.”

Jagger’s gaze moved back to her. Despite
the fact he’d slept almost continuously since his attack, he
appeared exhausted. The dark rings under his eyes also made him
look haunted, undoubtedly caused by the ghost of Alberto, who
continued to torment my lover even in death. I knew how it felt to
be raped, but what Jagger had been through was beyond anything even
I had experienced, and it tore me apart watching him fall to
pieces.

“
You were pleading for Frano to
get off you,” Jagger said to Rita.

“
We were just arguing,
nothing more.”

Jagger looked at me as though seeking
support. He was right; it did appear as though the Don had been
raping Rita. However, being around the D’Angelos had taught me not
to take things at face value, even more so when it came to Jagger.
At our first meeting, he had given me the impression he was a
refined, confident man, but as our relationship progressed his
facade slowly fell away, leaving behind a broken boy.

“
If Rita says the Don wasn’t
attacking her,” I replied, “we must’ve misjudged what we
saw.”

Thuds came from behind me. I glanced over
my shoulder as two large men entered the room. Although the Don
called the men soldiers, they weren’t wearing fatigues. Instead,
they were dressed in black pants and white shirts, as well as
holsters containing guns. We’d passed them on our way to the cell.
They had been carrying a dead man, while another soldier had been
receiving an earful from a naked woman with black hair. I had done
a double-take, because it had looked surreal: a warped dream with a
mishmash of strange characters.

The two soldiers stalked
towards us
,
the men terrifying. One of them had a large facial scar, as though
someone had slashed a knife diagonally across his face, while the
other looked as though he was on steroids. I backed up into Jagger,
knocking into the chair he was still clutching. He moved away from
me, lifting the chair higher, probably just as scared.

The bigger of the two men went to Rita.
“Move, slave,” he said, his deep voice commanding.

Rita got off the Don, allowing the man
access to him. The soldier started checking the Don. “He’s alive,
but I need to get him upstairs.” He removed what looked like a
radio from his belt and barked orders into it. He clipped the radio
back onto his belt, then picked up the Don as though he weighed
nothing. He turned to the door as another soldier entered the room.
“Move the slave to the next cell,” he said, indicating to Rita with
his head.

“
That’s not
happening
,”
the soldier replied, heading out the door.

The
new soldier removed a gun from his
holster and indicated for Rita to leave. He was a muscular bald man
in his forties with a hard and uncompromising face. She glared at
him, but still headed for the door. As soon as she neared him, she
lashed out, moving so fast that the guard didn’t have time to
react. His gun went flying out of his hand, skidding across the
floor. Rita went for it, but the soldier spun around, knocking her
down with a roundhouse kick. Before she could get up, he grabbed
the gun. Although she looked winded, Rita rose to her feet, her
body tensing for another attack.

He pointed the gun at her. “Do that one
more time and I’ll shoot you.”

She pointed to the door. “Frano’s my
responsibility. Let me go with him.”

“
Penso di no
,” he replied, saying he didn’t
think so, something that Jagger had said to me a number of
times.

The soldier
raised the gun. “Last warning.
I may not kill you, but a bullet to a leg or arm isn’t
pleasant.”

Her body
tensed again, the woman nothing
but muscle. She looked over at Jagger, who was still staring at the
scarred soldier in front of us. The soldier was intimidating to say
the least, because he was just standing there like a statue,
watching us, paying no attention to the other two in the room. I
knew the Landi soldiers were here to protect us, but if they were
our protectors I would hate to see our enemies.

Jagger turned his head to look at her, the
expression on his face cutting me. I wondered whether Rita’s
bruised face had been received while trying to protect Jagger from
Alberto. My heart told me it was. I wanted to repay her with
kindness—and when I had the chance, I would.

She headed out of the room with
the soldier, who kept his distance this time, the man learning his
lesson. They disappeared around the corner. I looked back at the
scarred soldier in front of us, who was still staring at Jagger. As
soon as the neighboring door banged shut, he pulled out his gun and
indicated for me to move forward. “Out of the room now,
donna
,” he said, saying woman in Italian.

“
What are you going to do
with
Jagger?” I said.

I shook my head, not wanting to leave
Jagger alone with the man. “He needs to return to his
room.”

“
He attacked the Don, so he has
to be contained.”

“
The Don said
Jagger’
s my
first priority, and I won’t allow you to lock him up like a
prisoner. He has been hurt; he needs to be attended to.” I
straightened, trying to appear important, even though I felt tiny
in front of the man. “I am his nurse, and he needs to be in his own
bed where I can attend to his injuries.”

“
Then I will station someone on
his bedroom door, but Jagger will not be allowed to leave his room
until further notice.”

I nodded, relieved at his concession. The
soldier stepped aside, indicating with his gun for us to pass. I
turned to Jagger, placing my hands on the chair. “Let go,
Jagger.”

He shook his head, his eyes still on
the soldier.

His face twisted.
“No one keeps their
promises and everyone finds a way to hurt me.”