Read Not Quite a Mermaid Online

Not Quite a Mermaid

Not Quite a Mermaid
MERMAID SURPRISE

Linda Chapman lives in Leicestershire with

When she is not writing she spends her time

looking after her two young daughters,

MY SECRET UNICORN Series
NOT QUITE A MERMAID
Series
STARDUST Series

Not Quite a Mermaid
MERMAID SURPRISE 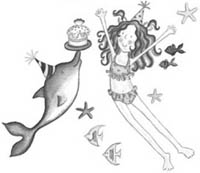 The moral right of the author and illustrator has been
asserted

To db, who told me about sea miceâ¦ 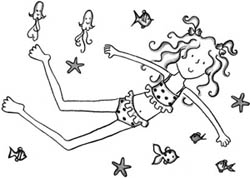 âA giant sea snake!' exclaimed Electra, the mermaid. She stared at her mum.

âYes,' Maris replied, her green eyes serious. âIt's been seen swimming outside the reef wall. It's only a baby. It shouldn't be able to get through the
wall but there's just a chance it might wriggle through a crack and get into the caves.'

âWow!' Electra looked at Splash, the young dolphin who was swimming nearby. âDid you hear that, Splash? Shall we go and see if we can find it?'

âOK!' Splash whistled. He lived with Maris and Electra because his own parents had been killed by sharks. He and Electra were best friends. âI've

never seen a giant sea snake before,' he said.

âMe neither!' Electra spun round in the water in excitement, her long red hair swirling around her. âIt'll be an adventure!'

âElectra! Splash!' Maris said as if she couldn't believe her ears. âYou are not going to see the sea snake! Giant sea snakes are very dangerous. Even though a baby one can't eat you, it could still give you a nasty bite. I will not allow you to go and see it!'

âNo, Electra.' Maris put her hands on her hips and swished her tail.

Electra could tell from the strict look on her mum's face that there was no point in arguing. Maris, like all the other merpeople who lived in the warm shallow waters around Mermaid Island, didn't like doing adventurous things. They liked staying inside the coral reef that surrounded Mermaid Island like a circular wall. But Electra was different. She loved having exciting adventures! Luckily Splash did too.

âI've got to go out to the shops now,' Maris went on. âI've asked Ronan if
you two can go and play with Sam and Sasha for the afternoon.'

Sam and Sasha and their dad, Ronan, lived in the next-door cave. Sam and Sasha were twins. They were almost a year younger than Electra, and she and Splash were very good friends with them.

âOK.' Electra would rather have gone out looking for a baby sea snake but playing with the twins would be fun.

âAnd try not to get into trouble while you're there,' Maris said.

âHmmm,' Maris said, not looking so sure.

Maris, Electra and Splash swam next door. Electra put her mermaid bag over her shoulder, hung on to Splash's fin and kicked with her feet. Liking adventures wasn't the
only
thing that made her different from the other
merpeople. While they all had tails, she had legs and feet. This was because Electra had been born a human.

She had been washed up near Mermaid Island in a small boat after a dreadful storm one night eight years ago. She had just been a baby at the time. The merpeople had found Electra and decided to bring her up as a mermaid. They had given her magic sea powder so she could breathe underwater and then Maris, a young mermaid, who had no other children, had adopted her. Now, Electra couldn't imagine being anything but a mermaid.

âHi!' Sam and Sasha came to the cave doorway to meet them when Maris rang the conch-shell bell. The twins both had very blonde hair. Sam's was short. Sasha's reached her shoulders and she usually put a plait in it on one side.

âI'll be back to collect you at tea time,' Maris told Electra and Splash. She kissed them both. âBe good.'

Electra was pleased. She really liked the twins' grandmother. Some of the older merpeople gave Electra strange looks because she didn't have a tail, but the twins' gran was always really nice to her. If she ever brought Sam and Sasha any sweets she always made sure she brought a big bag for Electra and Splash too.

âIt's Gran's birthday today,' Sasha told Electra as they swam through
the shell curtain that hung in the cave doorway. Inside was a round table made of mother-of-pearl, a big sofa and three comfy chairs made from large blue basket sponges, and squashy cushions made out of smaller lilac sponges. A purple seaweed rug covered the floor. Everywhere was very neat and tidy â but then it always was. Ronan hated mess.

The twins' gran was sitting on one of the comfy chairs. She was an old mermaid with long grey hair, a lined face and green eyes that twinkled. âHello, dear,' she said, smiling at
Electra. âThe twins told me you were coming round and luckilyâ¦' she paused to rummage in the mermaid bag she had beside her, ââ¦I had brought these for you and Splash.' 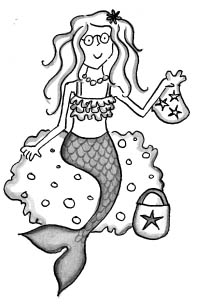