Not Quite Juliet: A Club Imperial Novel (Silver Soul Book 1) 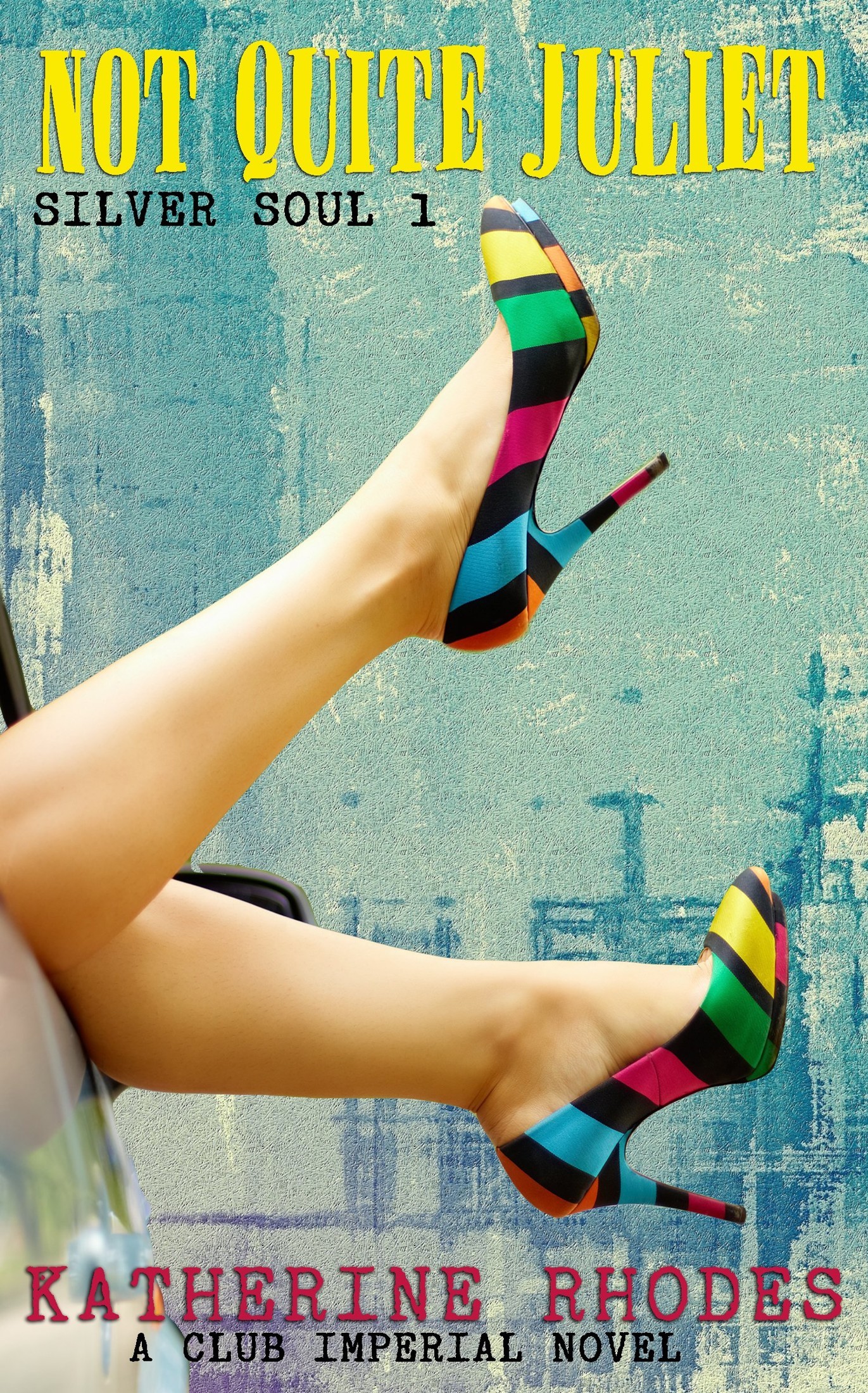 This is a work of fiction. Names, characters, places

and incidents are either the product of the author’s

imagination or used fictitiously, and any resemblance

establishments, events or locales is entirely

protected under International and Federal Copyright

Laws and Treaties. Any unauthorized reprint or use of

this material is prohibited. No part of this book may

be reproduced or transmitted in any form or by any

means, electronic or mechanical, including

photocopying, recording, or by any information storage

and retrieval system without express written

permission from the author / publisher.

One fateful night, by the grace of beer and peanuts...

Lands on her ass right in front of him.

Morgan is sure the lead singer of Silver Soul thought she was a graceless flake, but instead asks her to a midnight diner and winds up back at her place. She’s sure it’s just a crazy one-night fling...

Imagine her shock when the very next Monday at Allegheny County Courthouse, the highly respected, well-credentialed chemist Dr. Nicholas Dovadsky is called as a witness — and Morgan recognizes him as the rock god who rocked her bed. Sparks fly between them and Nick doesn’t intend for anything or anyone to stop him from getting to know the spunky, curvaceous, if clumsy, woman.

But things get complicated - fast. When an ex-boyfriend returns to haunt Morgan and her roommate, no one takes him seriously. When the simple threats become violent, perverse and horrifying, they realize someone is out to get her... and they aren’t going to stop until they do.

Silver Soul is a hot local band without big aspirations. Good boys during the day, bad asses at night, they play for the love of the music. They have all the requisite members: the hot lead singer; the wild and crazy bassist; the dreamy, laid-back rhythm guitarist; the animal on drums; the organized, behinds-the-scenes genius manager- and trouble on the lead guitar.

-To
Scarlett
, Leann, and Levi; always in your hearts

though not in your arms.

-To
Jennifer Lynn
, the little girl I never met.

-To friends and family and those strangers who shared

their deepest pain with grieving parents.

-To T, whoever you are. Your words to a family in pain are

immortalized here in the hope that someone reads them

the other feelings come back.

W
ith nothing more than a pair of boxers slung low on his sculpted hips, barely hiding the massive package he sported, he walked toward me. His flat stomach rippled in delicious waves as he slowly prowled closer, and then climbed on the bed. Rock-star-long hair teased me as he worked his way up the mattress, brushing against my stomach, then my breasts. I could feel his breath on my face as he leaned in close.

The longing clear in his eyes, he dipped in even closer and sniffed me. He pressed a kiss to my forehead and then started licking my face.

I was startled and confused as the licking continued.

He looked at me, full of lust, licked my nose.

He licked an eyelid, then looked at me again and asked, “Meow?”

I snapped my eyes open to find Dervish staring at me.

“Oh, you fucking cat.” I pushed him off to the side. With a heave and a groan, I sat up and ran a hand down my face, then looked at the clock: 7:45 a.m. “Uff da.” I narrowed my eyes at the black cat sporting a tux and a white eyebrow. “You little shit. It’s Saturday morning.”

“Mrow!” he said, rolling over. He wanted tummy rubs. After all, they hadn’t been given at the proper 6:15 a.m. He swatted my hand and rolled even further.

“He was about to ravish me, damn it!”

“Don’t be contradictory, or I’ll buy you store brand next time.”

I surrendered and complied with the Feline Master. When Dervish asked for tummy rubs, he was being genuine. Most cats, if they showed the tummy and you went in for the pet, they were more like a Venus fly trap, snapped their little paws right around your hand. Not Dervish. He had me on a schedule.

Once the fuzzy bastard was satisfied with my ministrations, I climbed out of bed. It wasn’t worth it to try and go back to sleep at that point. He trailed me into the kitchen waiting for the familiar pop and plop of his breakfast. As he tucked in, I set about starting the coffee and defrosting one of the gluten free bagels I had decided to try. Ugh. What a fail.

Lisa walked out of her bedroom about half way through the coffee pot’s cycle. She yawned, stretched and sat on the chair. I looked at her and raised my eyebrows. “What are you doing here? Where’s your Sir?”

“Oh, this should be good.” I sat down on the stool next to her.

“I’m so done with him,” she stated. “He took me to the shibari room last night, and left me tied up for seven hours. Inverted.”

“You’ve gone longer.” I studied her face, trying to read her mood.

“He left!” she cried. “He found some other hussy to tie up and left with her. He
forgot
about me. Do you know who found me?”

I cringed. “And let me guess. She laid into you.”

“Thank God, Franz walked by,” Lisa mused. “He lit into her.”

I paused. “Did anyone take you down?”

“No! I had to hang there, listening to these two yelling at each other.”

I started laughing. “You were just hanging there tied up while Franz and Jemma screamed?”

“It’s not funny!” she laughed. “Tessa finally showed up and lit into the two of them about me still dangling there.” I tried to hold back the laugh, but it was really hard to do. Lisa seemed like she wanted to be pissed off, but finally gave in and started laughing with me. “She finally took me down and called in Dusty to let me out. They took me to the office and made me sit and have some orange juice.”

“Dominic racked me and stacked me, and left.” She tried to growl. “He can blow that donkey of his.”

“How did no one come down and tell me this was going on? I would have You Tubed this!”

She laughed. “Just go get me coffee, bitch.”

“Who’s the submissive here?” I slid off the seat. “Next time you’re hanging around, make sure you send someone to come and get me. I need to see that.”

“Well, it’s a possibility that Sir...gah, Dominic, will be by later. I need him to take his shit from my room. I’m not going to be left hanging. Literally.” She accepted the coffee from me. “Um. Morgan, can you please hang here today with me? I really need to be rid of S...Dominic. He’s been a jerk to me more than once lately, and I haven’t been bratty at all. Last night was the straw that broke the camel’s back.” She ran her thumb over the handle of the mug, innocently.

My poor submissive friend. There was nothing innocent about her, but she really was a very submissive person, she always followed other’s directions. When it came to standing up to someone, she always needed back up. That’s why she had a roommate—me.

“Thank you” She beamed.

I hopped up on the stool again. “How about I make us some breakfast, and we find all of Dominic the Jackass’s stuff in the apartment. We’ll pack it up before he shows?”

“That sounds fantastic,” she said with relief.

I raised an eyebrow. “One of these days, you’re going to slip and call me Mistress.”

Lisa snorted into the coffee, then started coughing and choking while trying not to laugh.

I wound up making pancakes and bacon after coaxing the decision out of her. No amount of effort on my part ever changed her: she always wanted to let someone else take the reins. She wasn’t lazy as several other of her previous roommates accused her of being. She was just naturally submissive. It was a distinction I had picked up on early in my days at the club, and I’d learned to work with that without turning into her Domme in the process. We had an elaborate chore chart, and specific things each of us had to do, and as long as I reminded her to do something, we did well as roommates.

After breakfast, we started hunting down Dominic’s crap in our apartment. An hour of searching just her room and our dining room made me realize how much stuff this guy had in our place. When I found his underwear in our hamper, I about blew a gasket.

“What the hell is this?” I screamed, pulling them out. Lisa was horrified. “Do you mean to tell me that we’ve been doing his laundry for him?!”

“He’s been so sweet lately. He kept offering to take the clothes to the laundromat for us.”

“The laundromat.” I nodded. “Where we have a standing account for charges.”

“He’s been having us pay for his laundry.”

I slammed my hand on the wall. “That son of a bitch!” I looked at her. “Do you realize his nasty under-roos were next to my sexy club clothes?!”

“For what? I don’t care if your undies are with mine, but his? Especially since you just found he’s doing the world tour de skank?” She laughed. “He owes us
both
money.”

We managed to separate the clothes, his from ours, and finished packing up the rest of his stuff. I wished Lisa could pick up some non-submissive tendencies, aside from being bratty once in a while. From the amount of stuff Dominic had in our place, he’d been practically living there.

Not that I would notice, really. I worked two jobs– the bar at Club Imperial and my full time job as per diem court clerk. I wasn’t there very often. Usually it worked out for my friend’s kinky sex habits. I wasn’t there when she was getting tied up, and since I never got laid anymore, she never had to hear me.

The ever inconvenient Dominic showed up when I was showering before my bar shift. He let himself in, though I hadn’t given him a key and I was pretty sure Lisa hadn’t either. He was standing in the kitchen when I walked in wearing my robe. In the middle of giving Lisa a dressing-down, he had her sitting at the breakfast table. Her head hung to her chest and she let him give it.

Seeing me standing there, he dismissed me with his usual annoyance. “Morgan, go back to your room and finish your shower.”

“The key to our front door,” I snapped.

“Please give her the key.” Lisa’s quiet voice backed my demand.

“Yes. It is. This is half my apartment, and I get half the say.”

He stared at me. “This is my subbie, and you get no say in that.”

“She’s not your
subbie
, Dominic,” I stated. “You left her hanging in the shibari room last night. You are not welcome here, you are not welcome in her life. Give me your key, now. Take that box near the door and get out of here. Don’t come back, and don’t come near Lisa again.”

He tried another tack. “Lisa.” he started.