Read Over & Out Online 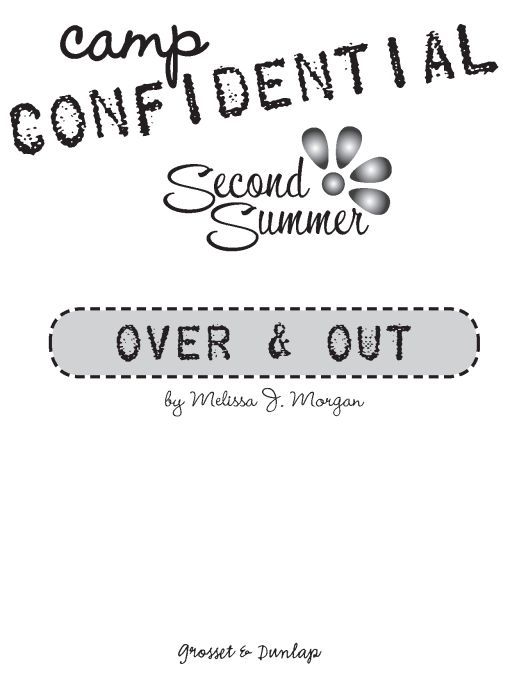 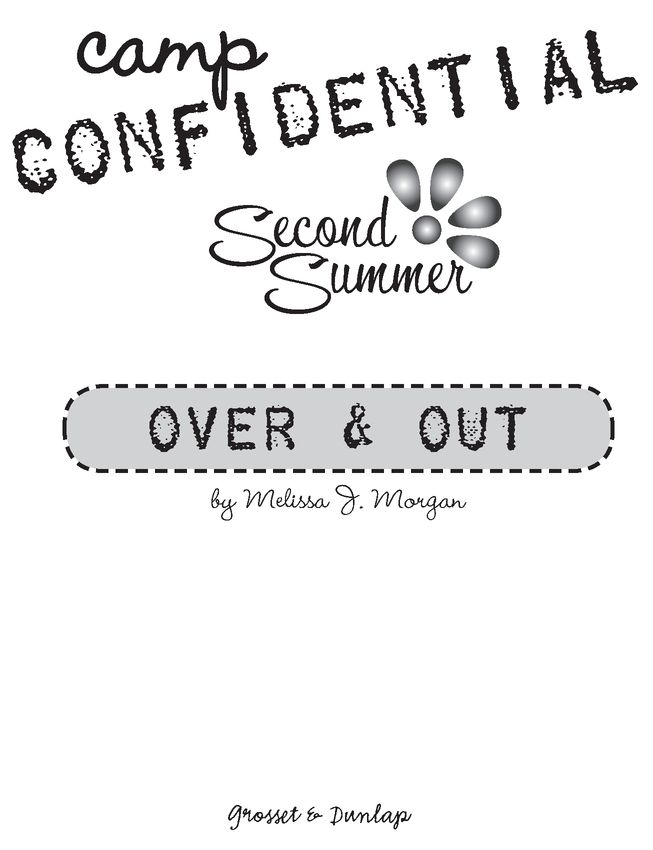 chapter ONE
Hey Matt (aka Einstein wannabe),
How's it going, Dr. Bloomenstein ? I can't believe Mom let you set up a mini- science lab in the basement. That's a scary thought. With all those test tubes you've got, you could be creating radioactive cockroaches down there or something. Just be sure to let them loose in Adam's room, not mine, k?
I can't believe there're only two weeks left here at camp. The summer's gone by way too fast. It's such a downer to think about leaving. But I'm still planning on getting in as much fun as possible while I'm here. No, Big Bro, before you start with one of your lectures, this doesn't mean pranks. Since I got in trouble with Dr. Steve last summer for all my pranking (the animal-shack fiasco in particular), I'm breaking new records for good behavior (even without Stephanie around to play the “Third Parent”
...
ha-ha). I only raided Adam's cabin once so farâtalk about exhibiting amazing self-control. Besides, I've got way more important things to worry about right now.
Color War starts next week, and I've been putting in some serious preparation time on the soccer field and basketball court. Remember how I was voted MVP for the Blue team last year? It'll be tough to top that, but I'm gonna try! Alex and I have been scrimmaging on the soccer field in all of our free time. She's even better than last year, Matt! I really hope we're on the same color team again this year. If we are, we might be able to bring home a Lakeview Champion title. Even though we're in different cabins (which was a major bummer at the beginning of the summer) we're still awesome friends like always. And we're ready to kick some big-time Color War butt!
Anyway, enjoy yourâughâscience. Just don't blow any thing up unless it's Mom's spinach casserole. That I can live without. I better sign off. Natalie and Alyssa are threatening to toss my candy stash in the lake if we don't go to dinner RIGHT NOW. Yeesh. They must really be starving if they're this excited about the mess-hall food. I'm just hoping it's not a mystery meat loaf day. I miss you, and I'll see you soon .
Love,
Jenna
Jenna Bloom looked hungrily at the platters of french fries that the CITs, or counselors-in-training, were marching through the mess hall.
“Are you seriously going to eat those?” her friend Alex asked.
“Yup.” Jenna grinned. “They're the only things that look edible.” She and Alex had to eat at separate tables with their different bunks, but they always had a few minutes to chat beforehand. She saw Alex sizing up a tray of mac and cheese. “Don't tell me that you're going to eat
that
? It looks a little curdly, if you ask me.”
“It doesn't look that bad,” Alex said. “But then again, I have to think positive about it, since I'm sick of french fries and this is the only other thing I can eat. Besides the mushy broccoli.”
“Sorry about that,” Jenna said. “But you're probably way healthier than any of the rest of us, especially me.” She knew from their last summer together that Alex had juvenile diabetes and had to be really careful about what she ate. Pasta and vegetables were good for her, but some other kinds of food, especially ones full of sugar, were dangerous for her to eat. But now that all the girls knew about Alex's condition, they were careful to be understanding of it. Jenna grinned and elbowed her playfully. “And if it makes you feel better, I asked my mom to send some honey cookies in the last box of goodies she mailed me. Just for you. The package came this morning, and it's sitting under my bunk . . . right now. I figured we'd both need some extra energy to perfect our soccer skills for Color War,” Jenna said. “Hey, what did you request for your final electives?”
“I asked for sports and photography,” Alex said as they headed toward their tables.
“Photography?” Jenna asked. “I didn't know you were into taking pictures.”
Alex blushed. “Well, IâI've been wanting to learn the right way to use my camera for a while now, and . . . and . . .” She stammered, and the words died away.
“And you wanted to be in an elective with Adam?” Jenna teased, watching Alex's cheeks flush bubblegum pink. She rolled her eyes. Adam, Jenna's brother, was the camp's best photographer. Last summer, Alex had had a tiny crush on Adam, and every once in a while Jenna still caught Alex looking at Adam with a shy smile on her face. But there was no way Alex could possibly
really
like Adam Spasm again, was there?
Alex giggled. “I don't know. I might not even get to be in photography. What electives did you ask for?”
“I asked for sports, too, of course,” Jenna said. “If we both get sports, we can practice soccer and basketball every day. Man, if we're on the same color team, we'll be unstoppable!”
“Lakeview legends, reigning victorious,” Alex said. “I can't wait.”
“We'll go down in history, that's for sure,” Jenna said, slapping her a high five before they split up to sit down at their separate bunk tables. She and Alex had been coming to Camp Lakeview for the past five years, and it seemed like they'd been friends forever. They'd always been in the same bunk together, until this summer. This summer, all of the girls from last year's bunk 3C had been divided into separate bunks. Jenna was in 4A, and Alex was in 4C. But that hadn't stopped the two of them from staying close friends. Sports were what Jenna and Alex did best, and Jenna couldn't wait to spend as much of her free time with Alex on the soccer field as possible.

Jenna plopped down at 4A's table next to Natalie and Tori, who were in the middle of a debate about Tad Maxwell's latest hairstyle for his new movie,
Spy in the Sahara.
Tad was a huge movie star, but he was also Natalie's dad. He'd shown up at camp once last summer and had practically caused a fainting frenzy of mass proportion among the girls. But for the most part, Nat liked to keep a low profile about him. Except, apparently, today.
“I can't believe he got hair extensions for this movie,” Nat said, shaking her head as she looked at Tad's photo in the issue of
Star Scoop
that Tori had brought with her to lunch. “His hair's longer than mine now! And he's middle-aged
and
a parent. That's just not right.”
“Maybe the directors wanted him to look younger,” Alyssa offered, leaning over the table to inspect the photo. “It's gotta be tough to be over forty and competing with guys like Orlando Bloom for roles. Hollywood isn't very forgiving of wrinkles.”
“Well, I think he looks cute,” Tori said. “He has to look rugged if he's roughing it on a camel in the desert for this movie.”
Nat groaned, her head in her hands. “If anyone else calls my dad âcute' again, I'm in serious danger of losing my lunch.”
“If it makes you feel better, I don't think he's cute,” Jenna jumped in. “And I think he looks better with a buzz cut.”
“Thank you!” Nat said, snapping the magazine shut.
“No problem.” Jenna smiled as she dipped a couple of her french fries in ketchup.
She was just about to pop them into her mouth when Alyssa's eyes widened in horror. “Jenna, stop!”
Jenna froze. “What?” she asked, glancing down at her food. But then she saw it. The charred clump of . . . what? A bug? A piece of yesterday's mystery meat loaf? Jenna couldn't tell for sure. But whatever it was, it was stuck to the side of one of the fries looking
very
unappetizing. “Eeeuw!” she cried, flinging the fry back onto her plate in disgust. “How gross is that?” She dumped her fries in the trash and dug into her chicken fingers instead, but only after carefully inspecting them to make sure they were free of UFOs (Unidentified Food Objects) first. “Okay, guys. Word to the wise. Avoid the french fries at all costs.”
Just then, Tori gave a low whistle.
“Hottie,” she whispered excitedly, “twelve o'clock. Headed this way.”
Jenna looked up to see Adam walking toward their table. “Gross, Tori,” she said. “My brother is
so
not hot. That's a totally disturbing picture.”
“Not Adam,” Nat said. “I think Tori means the guy
with
Adam. Who is
he
?”
The stranger walking with Adam hadn't even registered on Jenna's radar before, but now she took a second look as they came closer. Even Jenna had to admit that the blond-haired, blue-eyed guy looked more like a boarding-school preppy than a camper. From the sleek sunglasses perched on his head to his boating shoes and polo shirt, he was primped, polished, and could've been straight out of one of those
Star Scoop
photos.
“No way,” Tori whispered. “Those
cannot
be Hugo Boss sunglasses he's wearing.”
“Hugo who?” Jenna asked.
ADS
15.4Mb size Format: txt, pdf, ePub