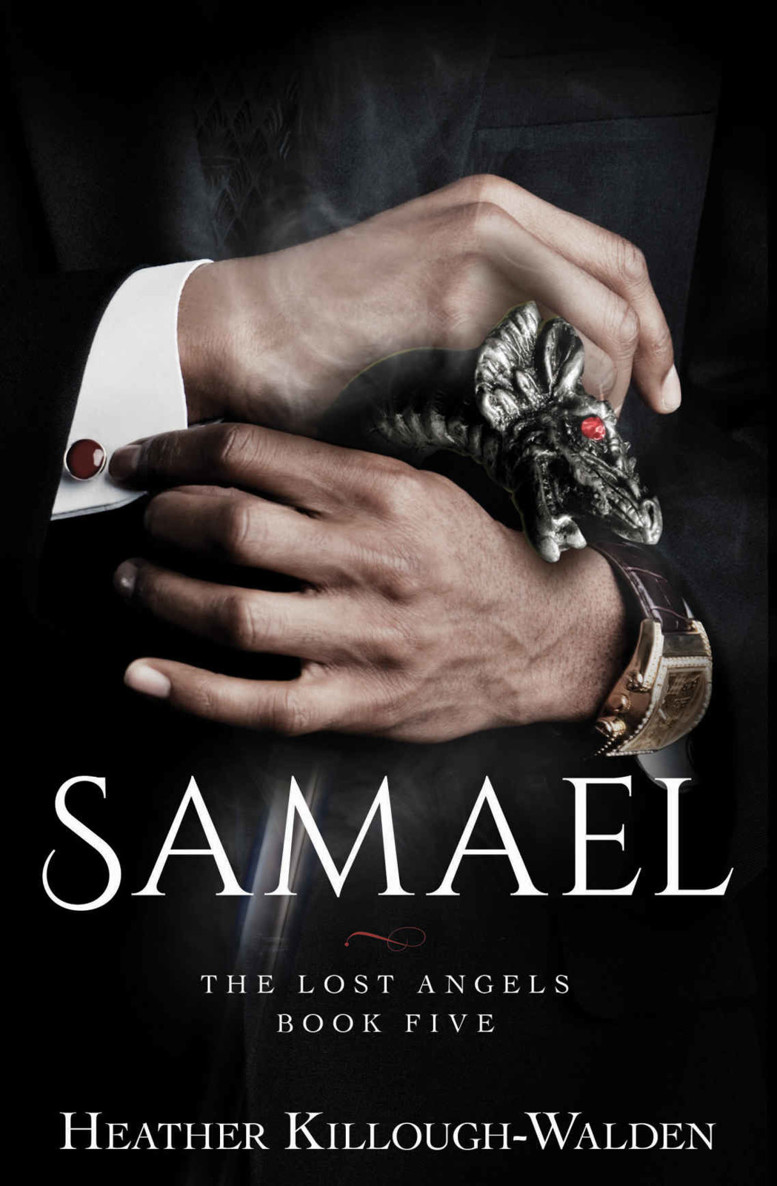 A great big thank you to my editors,

Your help (and positive feedback) are priceless.

And a very special thanks to my daughter,

for so effectively continuing to inspire the character,

You
are
the red dragon, my precious child.

“You’re shying away. I’ll be coming for you anyway.”

Long ago, the Old Man gathered together his four favored archangels, Michael, Gabriel, Uriel and Azrael. He pointed to four stars in the sky that shined brighter than the others. He told the archangels that he wished to reward them for their loyalty and had created for them soul mates. Four perfect female beings – archesses.

However, before the archangels could claim their mates, the four archesses were lost to them and scattered to the wind, beyond their realm and reach. The archangels made the choice to leave their world, journey to Earth, and seek out their mates.

For thousands of years, the archangels have searched. But they have not searched alone. For they are not the only entities to leave their realm and come to Earth to hunt for their archesses. They were followed by another….

Kevin paused for just a moment to read the “Cash Only” and “Restroom is for customers only” signs on the glass door of 4357 N Western Avenue in Chicago. It was just after 3 a.m., and of course the diner was open. Apparently there was a phone inside, and a massive sign on one entire wall of the establishment highly recommended ham on the bone.

But that wasn’t what Kevin was after.

His green eyed gaze slid from the signs to the glass itself, and his vision adjusted. There were two couples inside and a group of five kids, teenagers. The couples had that traveling look about them, worn from the road, red-eyed and frizzy-haired. They were clean but for that inside-of-the-car residue that sticks in the pores and gums up the joints and smells like exhaustion.

The kids, on the other hand….

Kevin lowered his head. His gaze sharpened, his green eyes shifting into yellow, then orange and finally red. He peered hard – and listened. Three boys, two girls. They weren’t speaking to one another, but their bodies told a story without words. Bouncing legs, hands that combed through sweaty hair, eyes that darted to one another, then out the windows, and throats that worked nervously were side-bars and footnotes to the truly telling side-effect of their night. Their hearts were beating with a terrible restlessness, hard and painful and full of desperate life that was begging to hang on but was overworked.

Kevin would guess meth, from the smell of it. There was some cocaine in there somewhere too, and a shit load of hard liquor. But it didn’t matter. None of it would have any effect on him.

All he wanted – all he
needed
– was the beating heart. The fact that it was beating for all it was worth, as if there were no tomorrow, was even better.

Kevin glanced over his shoulder at the shadows moving in the street behind him. Lightning sizzled across the sky overhead. Chicago was in turmoil and had been since around the time Michael and his slut had done the deed. But it wasn’t the Culmination.

Not just yet. In fact, the big “C” was what he and the others were supposed to prevent from happening. By killing the last of the archesses. Whoever she was.

Later
. Right now, Kevin was hungry, and he could sense his brothers were too. They moved closer to the diner behind him, creeping from their places in the darkness as if unsure. They were undergoing epiphanies, the lot of them. And they were suddenly as drawn to this edible pain relief as he was.

As he’d always done, he led the way, pulling the door open and stepping inside.

It was relatively quiet inside; the sounds of traffic and thunder were muted from behind the glass. But the quiet didn’t last long, as the other Adarians piled in slowly one after the other behind Abraxos. Little by little, the conversation within the diner stopped. All eyes were on the newcomers now.

Kevin didn’t wonder why. What a scene they must have made.

There was a time, what felt like an eternity ago, that Kevin had gone by another name. He’d sported it proudly, as proudly as his wings. He’d been handsome then, and he’d known it, and those who’d followed him in what would eventually become an uprising in the angel realm, were just as beautiful. Angels always were. And the more powerful they were, the more glorious that beauty.

Outwardly, their appearances were little different now. They were minus their wings, and their skin was a tad more pale. Perhaps their eyes burned with fire rather than light; their expressions held a wealth of emotion, and their gazes were trapped in memory. Every single one of them had known murder from both sides of the coin. Most of them knew betrayal, and that was worse.

But they were still beautiful. Very much so. It was just a
scary
beautiful now.

The waitress behind the bar looked at them warily and back-stepped a bit. Her hand slid into her apron, where Kevin could see the outline of some sort of touch screen phone. Good instincts, that one. He ignored her, though. Even in this new fear of hers, her heart beat too slowly.

The couple at the far end of the diner were seated on the vinyl spin chairs up against the dining bar, and those chairs turned slowly beneath their tense bodies. Their exhausted faces adopted looks of fear. Kevin recognized the look so well, he ignored it.

He’d wager around seven of the men who’d formerly been Adarians had managed to come into the diner by the time Kevin reached the table with the ravers. The five kids stilled in their seats, as much as their bodies hated to do so, and five pairs of eyes stared up at him. The kid nearest to him was unfortunately the cleanest. His heart beat more slowly than the others, more calm. There was not nearly as much blood racing through its chambers as there was in the heart
next
to him, not nearly as much life as
hers
.

The girl beside him had blonde hair with blue streaks in it and was wearing way too much eyeliner; it choked the skin around the eye and drained the blue out of the iris, dimming its color. What was it with kids like this and eyeliner? It never looked good. What possessed them to think it actually did? No matter, though. In the end, the caretaker would wipe it all off and attempt to make her look like a kid again for her grieving parents. She would accomplish in death a post-mortem appearance of innocence that she’d long-since lost in life. Kevin supposed that was the silver lining.

He leaned over, bracing one strong arm on the table. He met her gaze.

The kid closest to him swallowed hard.

And then Kevin blurred into action, shoving his other hand through the girl’s chest. Bone crunched under his fist, and squishiness welcomed his searching, roving fingers as the diner exploded all around him. The waitress let out a blood curdling wail, and people tried to leave.

But by that time, the rest of the Adarians had begun to feed as well. Sounds filled the small diner, most of them unnatural. Someone yelled about the Armageddon. Someone else screamed about zombies. Kevin ignored it all. He’d found the girl’s heart, and it was full and plump and he was starving.

He lifted it to his lips and took a bite.
Life
tore between his teeth and poured over his tongue. It was something he hadn’t tasted in so very long.

Storms were choking Chicago. The lightning was so plentiful, at times the night sky would turn green. Electricity existed more in the air than it did in the wires that kept homes lit, air conditioners running, and microwaves re-heating. People turned to their radios and televisions for explanations of the bizarre meteorological turn the city had taken, but often times, those weren’t working. And when they were, the weather channel had no explanation anyway.

The heavens were simply angry. Even at night, the clouds gathered so thick, full darkness could not take hold. They spun slowly overhead, and seemed constantly on the verge of becoming something worse, something catastrophic. The beginnings of a tornado or the eye of a hurricane – this was what people saw when they stopped on the streets and looked up.

And this is what went on all around the ‘L’ Washington/Wells station platform, where a sole African American man repeatedly slammed his body against a phone booth until the entire metal structure groaned, tipped on its side, and crashed to the ground. He chased after it, falling to his knees beside it to look down upon its shattered glass as he would a dying friend. What he muttered next would have been unintelligible anyway, but was drowned out as it was by the sound of thunder that rolled like tumbling trash cans over the infrastructure of Chicago’s elevated subway system.

No one would have been paying attention to him; he was status quo. But no one was waiting for the ‘L’ at the Washington/Wells station, anyhow. This time of night, the train didn’t run from this platform any longer, and it was all but deserted. There was only the man, the fallen phone booth – and the two men who struggled out of sight just around the corner from them.

One of the men was dressed uncharacteristically in blue jeans and a light gray, long-sleeved thermal tee that hugged snugly to well-sculpted muscles normally hidden beneath the dark gray finery of an expensively tailored suit. His hair was shock white and brushed his shoulders like feathers. His eyes were a tumultuous dark gray that mirrored the troubled skies.

His opponent was dressed similarly, in blue jeans and a tight shirt, but both shirt and hair were jet black. His eyes were an improbable mixture of green and gray, like a cabochon of jade shot through with steel.

The man in the thermal shirt went publicly by the name of Samuel Lambent, multi-millionaire media tycoon who happened to be the owner of the networks whose meteorologists chalked the bizarre weather up to global warming. At the moment, however, he was Samael.