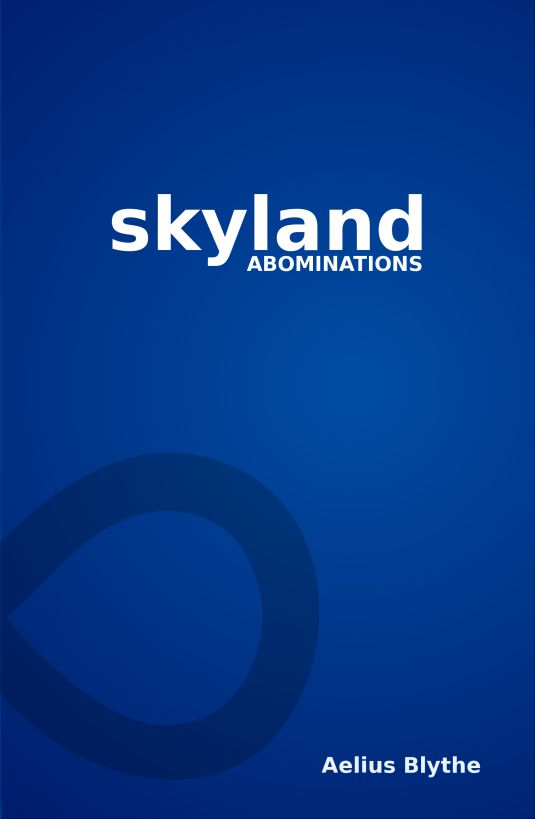 in which there is shit and there is kale

in which there is more shit

in which there is water, but only a
trickle

in which there is water (for strangers!)

in which there is a chair

in which there is space

in which there is a space of Infinite
Space

in which there is news

in which there is tea

in which there is cold

in which there is finally rest

in which there are chains (of some sort)

in which there is more cold

in which there is an... informant?

in which there is Sky!

in which there is red

in which there is food... or something like
that

in which there is trust

in which there is no one

in which there is not a surprise

in which there is a spy

in which there is light, but only barely

in which there is light

in which there is a decision

in which there is a job well done

in which there is an offer

in which there is surprise

in which there is blue

in which there is shit
and there is kale
...

The bleached needles towered over the city
and villages like the long bones of giants dead in the sand. Nine
giant ships impaled the Sky.

He squinted at the monstrosities. He crossed
his arms and planted his feet far apart and hoped that he looked
angry. It was the stance his father always assumed when railing
against the appalling sight.

Harper hoped he looked as determined and
wrathful as the old man did. His eyes flicked up to the sun, and he
adjusted his mental countdown. The folk in the city thought the
first ship would leave tonight. They thought they would get off
this dried up prune of a planet. They were wrong. Not one rocket
would fly, not today, not ever.

"Abomination," Harper hissed, and spat in
the dirt. It was an admirable impersonation of his father. He
hissed through his teeth again and drew out the word, resting on
the syllables as his father did,
"a-
bo-
mi-
na-
tion."

A hand slapped him hard on the back, and he
tried not to flinch. His father grinned, white teeth speckled by
the green leaf he was chewing.

He tore off another leaf, the size of two of
his field-toughened hands, from the puckered and chalky-green bunch
he held, and handed it to Harper, who was not hungry. But he took
it anyway and folded the entire thing into his mouth so he couldn't
talk – a gesture that failed to escape his father.

The old man laughed. "No shame in being
afraid, son," he said. "It takes fear to be brave instead of
foolish. And my son is no fool."

Harper did not answer; his mouth was too
busy pulverizing the tough leaf. His teeth ground against grains of
dirt. No amount of washing could tease out all the specks of grime
hidden in the folds. But it was okay. The remnants added a dirty
taste that almost covered up the bitterness of the kale.

Kale: it was one of the only things that
would grow on this rock. The farmers grew it in the small patches
of precious soil that had not yet been eaten up by the sterility
consuming most of Skyland.

The bitterness reminded Harper of why the
ships must not fly.

Many times over the past few days, he'd
forced himself to remember this.

Even now –
even now
– he felt more
awe than outrage as he watched the ships towering in the distance.
Such constructions were abhorrent and proud, but they were great
feats of man. Harper looked up, up past the tall peaks of the
rockets, up to the wide blue fields above.

The city dwellers who flew in the ships
would be trespassers against the heavens, but they would also be
closer to the Sky than the most devoted farmers had ever been.

No.
He set his jaw and lowered his
glare back to the abominations.
They are weapons against the
heavens.

Harper repeated these sermons to push out
ambivalence.

Then he turned his back on the ships. It was
easier to focus when they were not within his sight. It was easier
to be angry.

It was too late for reconsideration.

Inside in the shack's one room, a dozen
villagers gathered. They sat on the floor and a couple on the
window ledges, they leaned against the walls, they stood here and
there, crowding together, smiling, chatting. An old man sang a
creaky song and an old woman rubbed his shoulders. A laugh burst
out of a group in one corner. And as everyone celebrated, at the
center of the room, a handful of people sat focused, silent in the
seats of honor. At the one piece of furniture in the room, a round
table with seats all carved from one giant, ancient stump, six
villagers worked amid the chatter and the song and the
laughter.

Harper's stomach turned at the sight.

Waxy leaves were spread over the table.
Mounds of dark earth covered the leaves. Several pairs of weathered
old hands pinched the soil between thumb and forefinger, and
dropped it into little pouches. The other fingers did not touch the
specks of dirt; less was wasted when it was not smeared all over
the hands.

On a planet that grew almost nothing,
fertilizer was gold. Every bit of waste – human, animal, and plant
– was composted to feed the dwindling crops. Bands of hunters
searched the sands for the piles of dung left by the few animals
that still lived on Skyland. Farmers gathered every bit of inedible
vegetation from their crops to feed the soil. Raiders, the most
desperate of the country folk, would take by force any scrap that
they could sell or hoard. Here, the littlest scrap of organic waste
was only as valuable as the littlest nugget of gold.

In the shadow of the city.

And the growing demands of the city
population taxed the fields.

The century of drought and soil degeneration
had forced the villagers to devise better and better compounds for
fertilization. With meager access to the chemicals and the research
and the labs of the city, progress stagnated many times. But the
farmers dug deep into their inheritance of alchemical traditions
and their reserve of tenacity, and they persisted. Without this
effort they, and the rest of the planet, would never have survived
this long.

Their best formulas, however, were reserved
for special purposes. The most advanced, most carefully calculated,
most carefully constructed, and most concentrated samples were
secreted away, hoarded bit by bit in hidden, underground
caverns.

"From the dirt to the Sky."

One pouch was filled.

The old weathered hand that had filled it
held it up to the ceiling.

A cheer went up from the others crowded
inside the little room.

His insides were a snarled mess of trembling
guts. He could not watch this ritual. Today, there was only one
thing that could calm him.

As the old hands at the table moved over the
piles of dirt and picked up an empty pouch, Harper turned away and
slipped quietly out the back door. The people inside, laughing and
chatting and pinching dirt, did not notice.

in which there is more
shit
...

Harper wandered across the dry fields that
would not hold crops; he passed the shrinking patches of soil leafy
with kale; he walked a mile past the edge of the village. Far
beyond even the last solitary house and past the farthest field, he
came to the brown trenches.

The reek of them drenched the country, even
on the still air.

Harper pulled up the long neck of his shirt
that had hung down to his chest. Like most of the folk living
outside the city he wore the clothes of the dried up country,
clothes made appropriately utile from a hundred years of breathing
in dry earth and compost. The long excess of fabric on his shirt
would, in theory, block both the stench and the dust from his
breath. He took the two ties that dangled down to his stomach from
the neck and tied them at the back of his head, securing the
material just under his eyes. It did little to repel the wretched
stench of the compost, but little was better than nothing.

Gleaming metal platforms traversed the
trenches, grey scaffolding held up stages, large and small, with
railings at chest height, and here and there shacks stood over
precious shade. Walkways connected the shacks and the platforms in
an extensive metal maze. A mini-city built above the dark goop.

On the platforms, bent women turned the muck
with long poles. Their faces were also covered, and on many the
uplifted fabric revealed patterns around the neck and shoulders,
dark threads woven into intricate knots and pretty designs. Here
and there a real necklace caught the light, little metal pieces
delicately cut or gem fragments that hung bright over the dark
muck, tiny jewels worn in defiance of the lowly task.

The bits of color brightened the dirty
landscape.

Harper smiled as a blue chip caught the
light at the far end of one trench. His boots clanged loudly as he
walked across shaky walkways out to the platform. The woman on it
straightened up and leant her pole against the railing.

The Call of the Crown (Book 1) by T.J. Garrett
Corral Nocturne by Elisabeth Grace Foley
Chankya's Chant by Sanghi, Ashwin
Archives of the Frontier Universe: An Assassin's Assignment by Villanueva, Christopher
Back of Beyond by David Yeadon
Captured by Desire by Donna Grant
Dare to Kiss by Beverley, Jo
Descendant by Giles, Nichole
Stripped Bare by Shannon Baker
Chased by a Stranger (Craved Series #3) by Kelly, Hazel