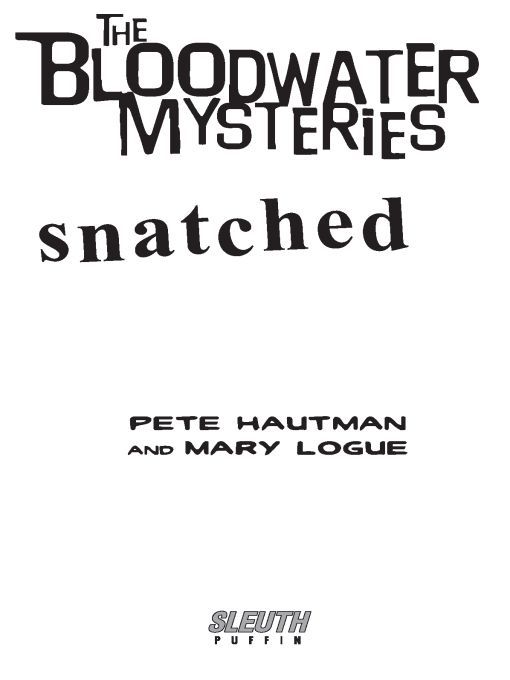 Table of Contents
Title Page
Copyright Page
Dedication
Chapter 1 - poison honey
Chapter 2 - girl talk
Chapter 3 - suspended
Chapter 4 - the stench
Chapter 5 - ride
Chapter 6 - bovine pustules
Chapter 7 - meat loaf
Chapter 8 - snatched
Chapter 9 - alone
Chapter 10 - the power of the press
Chapter 11 - three thorns
Chapter 12 - the plan
Chapter 13 - leverage
Chapter 14 - king tut
Chapter 15 - prime suspect
Chapter 16 - left, right, left
Chapter 17 - the collector
Chapter 18 - devil face
Chapter 19 - the bloodwater connection
Chapter 20 - hoot
Chapter 21 - love or money
Chapter 22 - river dance
Chapter 23 - the curse
Chapter 24 - overboard
Chapter 25 - style
Chapter 26 - scene of the crime
Chapter 27 - chess
Chapter 28 - carnivorous butterflies
Chapter 29 - back again
Chapter 30 - driftwood doug
Chapter 31 - tea for three
Chapter 32 - firth and spall
Chapter 33 - donuts and coffee
Chapter 34 - money pit
Chapter 35 - arnold thorn
Chapter 36 - perfect pitch
Chapter 37 - fleeing
Chapter 38 - lost and found
Chapter 39 - three pounds
Chapter 40 - boat puzzle
Chapter 41 - closet cleaning
Chapter 42 - imelda
Chapter 43 - sister louise
Chapter 44 - the cap’n arnold
Chapter 45 - rotting roses
Chapter 46 - the three dwarfs
Chapter 47 - floating islands
Chapter 48 - dead fish
Chapter 49 - crash
Chapter 50 - red nails
Chapter 51 - confession
Chapter 52 - all you need is love
Chapter 53 - heroes
Chapter 54 - lights out
snatched!
Brian got into the car and Roni took off, wheels spinning.
“How come you’re running around loose, Stink Bomb?” she asked. “Didn’t your parents put you under house arrest?”
“My name’s not Stink Bomb. It’s Brian.”
“Really? You don’t
look
like a Brian.”
“What’s that supposed to mean?”
“I mean, you look like a Quincy. Or maybe a Hector, or a Zigmund. I expected you to have a really weird name, like a mad scientist. You being a mad stink bomber and all.”
Brian said, “I’ll probably be grounded when my mom gets home, but my dad’s clueless. How about you?”
“I’m going over to Alicia’s to make the big apology. One way to get out of the house. Maybe she’ll be cool and talk to me about what happened.”
“I doubt it,” Brian said.
“You don’t have to be so negative.”
“Well, I’m pretty sure about this. Alicia just got snatched.”
OTHER SLEUTH BOOKS YOU MAY ENJOY 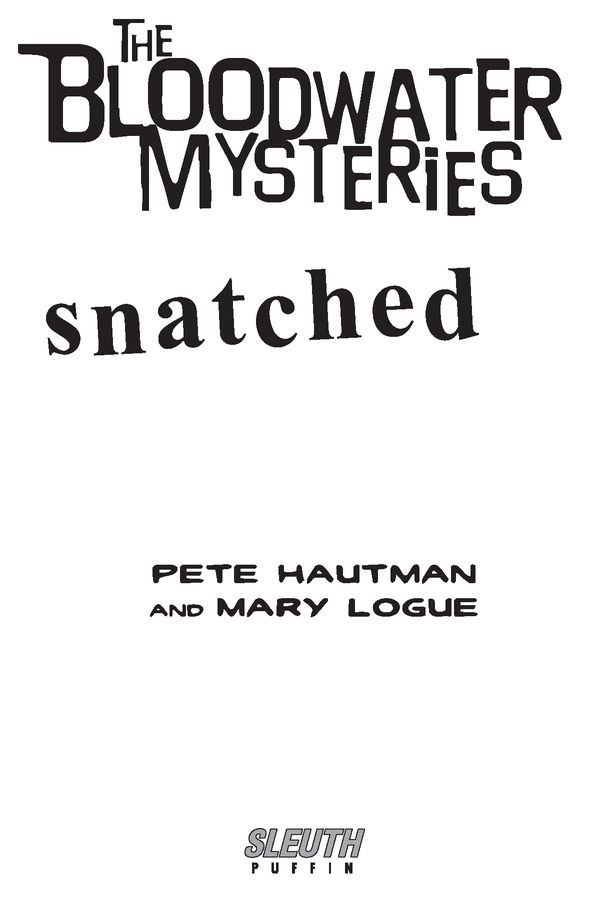 For Tucker
1
poison honey
Alicia watched the blood drip from her nose to the grass. She was on her hands and knees, hair covering her face like a veil. The blood looked black in the fading light of dusk.
Funny. It didn’t even hurt.
What would she look like in the morning?
She heard his voice, like poisoned honey. “Alicia?”
“Leave me alone!” Her voice sounded wrong. Her lips felt thick and mushy.
“Are you okay, sweetie?”
She said nothing. He knew she wasn’t okay. He knew everything. He even knew what would happen next. She would clean herself up, and tomorrow she would make up some story and they would pretend it had never happened.
She lied all the time. Sometimes she didn’t even know what was true anymore. She lived in two worlds and sometimes they were the same, but more often they were different. One world was light and airy, the other was dark and scary.
He touched her shoulder. She swung her arm and knocked his hand aside.
“Go away!” she shouted.
He was standing over her. She could see the tips of his shoes. She closed her eyes. She could hear him breathing. And then, after what seemed a long time, she heard his footsteps fading away.
She touched her hand to her face, then looked at it. Her fingers were dark with blood, but she felt no pain. She never did anymore. But this time it was bad. She had never before been hit so hard. Her face would be a mess.
How would she explain it this time?
2
girl talk
Last Friday a Bloodwater High student was mysteriously attacked and left for dead in Riverfront Park.
The victim, Alicia Camden, was found dazed and bleeding near the park entrance. She was taken to Mercy Hospital and treated for cuts and bruises, and for being scared half to death.
Although she has lived in Bloodwater only since the beginning of this school year, Alicia is a member of the tennis team, and lead actress in the school production of The Crucible. She is admired and well liked by all, which makes the reason for this unprovoked attack extremely bizarre.
Since the unfortunate and nearly tragic incident, students are advised to carry large handguns and shoot all strangers on sight.
Roni frowned at what she had written in her notebook. Not exactly a triumph of investigative reporting. In fact, it was pretty much what had been printed in the local newspaper that weekend, with a few embellishments. She needed a fresh angle, and it had to be good. It wasn’t every day she had a real crime to report.
Roni was sitting in the warm autumn sun on the steps in front of Bloodwater High School, along with several other students. Most of them were eating their lunch. Roni did not eat lunch. She had given it up in an effort to lose weight. So far, it wasn’t working.
She scowled at her notebook, trying not to think about food, and made a few changes in her story. She crossed out the words “left for dead,” and “well liked by all.” The first was probably not true, since the injuries hadn’t been that severe—it was only Monday, and Alicia was already back in school. As for the second item, Alicia was not terrifically popular. She was involved in plenty of school activities, but she didn’t seem to have a lot of friends. This made Roni like her better, not being terrifically popular herself.
Alicia did, however, have a boyfriend, Maurice Wellington. Maurice was the star of the basketball team, and one of the best-looking guys in school.
Roni left in the bit about “shoot all strangers on sight.” Roni always made it a point to give Mr. Spindler, the school principal, something to delete.
She was making a few more changes in her article when an attractive blond girl wearing oversize sunglasses and carrying a lime green designer backpack over her shoulder came through the front doors and trotted down the steps.
Roni jumped to her feet. “Hey Alicia!”
Alicia Camden stopped at the bottom of the steps and looked back. She waited for Roni to catch up to her.
“Got a minute?” Roni asked.
Alicia was wearing a lot of makeup, but not enough to cover the cut on her lip.
“Not really,” she said. “My mom’s picking me up for a doctor appointment.” She stared at Roni through her sunglasses. “Do I know you?”
“My name’s Roni. Listen, I heard about what happened to you.”
“You and everybody else in the galaxy.”
“How are you feeling?”
Alicia lifted her sunglasses to reveal a huge purple and yellow bruise around her right eye. “How does it look like I feel?”
“Kind of not so great,” Roni said.
“Thanks a lot.” Alicia lowered her glasses and started walking away.
“Wait a sec.” Roni fell in beside her. “I was wondering if I could talk to you about what happened.”
“Why? Are you some sort of accident geek?”
“Actually, I’m an investigator for the
Bloodwater Pump.
”
“The
Pump
?” Alicia laughed. “The school newspaper?”
“That’s right.”
“The police don’t want me to talk to reporters. Not even for that little rag.”
Little rag?
Roni felt her blood pressure rise. “Why not?”