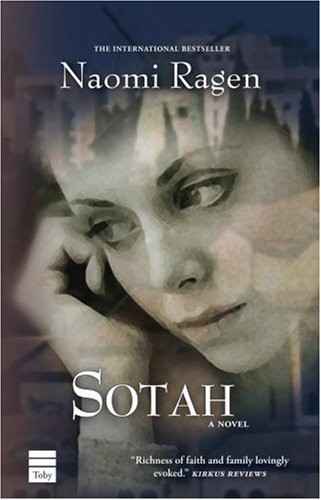 For
Bracha, Asher, Rachel and Akiva,
With all my love and hope.

The story of Dina Reich began with a newspaper article in an Israeli daily, a classic tale of extramarital love which—because of its milieu in the ultra-Orthodox Jews of Jerusalem, took on interesting nuances for me which I decided to explore.

There were several reasons for this. My first book,
Jephte’s Daughter
, had taken place in that setting. I felt I had more to say about that world, particularly the relationship between the sexes, with a focus on marriage. I wanted to show a different kind of marriage, a more representative one, than that of Isaac Harshen and Batsheva Ha-Levi in
Jephte’s Daughter
. With Dina Reich and Yehuda Gutman, I found the married love story I needed to continue my portrait of marriage in the ultra-Orthodox world.

It was with the publication of
Sotah
that I began to feel most keenly the difficulties of being a writer of English novels living in a Hebrew-speaking country. The material, its descriptions of the people and places of the Jeruslaem I loved, lived in, and knew so well, could not really be appreciated, I felt, by those living outside the country. While its publication by Crown Books in 1992, was well-received by American and British readers, it was only when
Sotah
became the first of my books to be translated into Hebrew and was published in Israel by Keter Publishing, that I understood how right had been my instincts.
Sotah
—called in Hebrew “And to your husband shall be your desire”, based on the verse from Genesis—became a literary phenomenon in Israel, leading bestseller lists for over 92 weeks. The experience of finally reaching my Israeli neighbors and friends made a lasting and unique impression upon me, giving me a sense of truly having set down deep and permanent roots in the country and culture I had chosen as home. I felt too, enormous satisfaction that my work had, finally, been judged by a jury of my peers.

With the publication of this Reader’s Guide Edition, I am delighted to be able to once more introduce a new generation of readers to this book which did so much to bridge the gap between the Jewish experience in Israel and America, both for myself, and for my readers.

“Y
es, I understand all that!“ Chaya Leah insisted, biting the pillow pressed to her chest to keep from screaming in frustration. “But what I can’t understand is how you just agree to it all! How can you just marry him!?”

Dvorah looked at her youngest sister and smiled serenely, indulgently, feeling a strange mixture of compassion and contempt. Poor Chaya Leah with her red, puffy cheeks, her red, impossible hair! I would die if I had hair like that, Dvorah mused, putting down her knitting for a moment and smoothing back her own dark, smooth, docile locks. If you tried to braid it, the hairs kept pulling out and curling up, going their own way. If you combed it back and pinned it, it bunched together and rose up like yeast. If she would only lose a little weight, though, she might be made to look presentable, or something close to. “Child,” Dvorah said imperturbably. “You don’t understand. I’m very lucky. Yaakov Klein studies in the best yeshiva. His father owns an appliance store. They’re willing to pay for half an apartment, to support us for two years while Yaakov goes on with his studies …”

“And on and on and on! …” Chaya Leah shouted, flinging aside the pillow. “While you get big blue veins on your legs and wrinkled, hard hands! Working day and night like our
ima
and his
ima
, earning a living, taking care of the house, the babies, one after the other!”

The knitting fell from the older girl’s hands and she looked up, shocked. “G-d forgive me, you sound like one of
them
, the
chilonim
,” she said with rare yet deliberate cruelty.

This comparison to the secular Jews who mocked them, who kept no Sabbath or holiday, who ate pig and shellfish, who never said a prayer or visited a synagogue, and who had probably forfeited all share in the World to Come was a sickening and shocking blow to the younger girl, as indeed it would have been to any member of Jerusalem’s
haredi
community, of which the girls and their family were respected and longstanding members.

Actually the term
haredi
—literally “those who shook from fear of G-d”—was a catchall phrase used by secularists that ignorantly lumped together many diverse and warring religious groups. It encompassed the many separate Hasidic clans, each united under their own charismatic leader and each cordially despising the other as well as their age-old opponents, the study-conscious Misnagdim. The latter heartily returned the contempt, viewing their Hasidic brethren as pathetically misguided in their blind belief in a leader and for putting prayer above study, emotion above intellect. However, there were two things that united all the groups, giving some credence to their collective title: their sincere, uncompromising adherence to the tiniest dictate of law and custom and their boundless contempt for and rejection of the secularists.

Dvorah knew she could have said nothing more damning. Yet she felt no guilt in having flung the epithet. (The child deserved it. Richly. The nerve!) Still, as a daughter of Rebbetzin Faigie and Rabbi Alter Reich,
haredi
Misnagdim, brought up to suppress not only every bad word, but every unkind thought, her hands shook as she took up her knitting. “Where were you brought up that you talk to me this way? May G-d forgive you!”

“Please, please. Don’t fight. I can’t stand it,” Dina interrupted softly, placing herself between her two sisters, her delicate white hands reaching out to connect the three of them. “Dvorah, how can you be so unkind? Chaya Leah, our Dvorah is almost engaged! She’s happy,
baruch Hashem
, G-d be blessed! Why are you doing this? Acting this way?”

Chaya Leah’s eyes brimmed hotly, but her mouth was defiant. “He is short and overweight and slurps his soup. I heard him. He is … fat!”

“Those are all petty, physical things. If you were on a higher spiritual level, a different
madrega
, if you’d learned more Torah instead of wasting time sneaking off to goodness knows where …” Dvorah said loftily, her head lifted, her back stiff with insult.

“She’s so young. She’ll understand when she gets older,” Dina tried.

“And more mature,” Dvorah interrupted with growing malice, her black eyes snapping with disgust. “You’ll both understand what a bridegroom is. You’ll understand what we are,” she added darkly, her ominous glance reducing the others to an uncomfortable silence.

It was a tiny room in which the three sisters sat, crowded with two bunk beds, an old hanging wardrobe of peeling light wood, and one small desk piled with books. Yet they felt themselves almost privileged. In contrast to the rest of the family, they had the roomiest bedroom in the house. Their parents shared a tiny alcove created by covering a back porch with sliding aluminum windows, and their five little brothers slept two and three in a bed in the third bedroom. The apartment was in a new building in one of those huge apartment blocks that had sprung up like mushrooms on the acres and acres of no-man’s-land incorporated into Jerusalem right after the Six Day War, buildings ten stories high with twenty-five or thirty tiny two- and three-bedroom apartments. True, the ten of them shared one bathroom, but at least it was new and indoors. Besides, they had not one but two porches overlooking Judea’s lovely rolling hills, its undulating, dark green forests. On clear days they could even see King Hussein’s unfinished summer palace, like the skeleton of a dinosaur caught in a cataclysmic change of ages.

Indeed, by the standards of Jerusalem’s
haredim
, it was a most roomy and enviably comfortable home. In fact, considering their former residence in Meah Shearim—a crumbling, one-bedroom walk-up built during the Ottoman Empire, a place with rusty outdoor plumbing and a roof that wept like a mourner during the short winter rains—Rabbi Reich often viewed his new place as almost sinfully luxurious. Often he asked G-d to forgive him for his delight in it and prayed that no disaster should befall the family because of their new material luxury. Leaky roofs, broken pipes, exploding boilers, were viewed as G-d’s mercy, his way of exacting payment for sins from metal and stone rather than human flesh. Secretly he worried that the reward he had so painfully and diligently accumulated for himself in the World to Come might be badly depleted as a result, like an overdrawn bank account.

There was silence in the room. “What’s wrong with us?” Chaya Leah asked slowly, accusingly.

“And you’re twenty and beautiful and intelligent and a
tzdakis
, a saint! You can find someone better!” Chaya Leah ran over and held her sister’s languid, smooth hands, caressing them. Dvorah shrugged her off impatiently.

It was ice cold in the room, as the heating system was run collectively and the majority of their neighbors had voted for only four hours of heat during the coldest winter months, all most could afford. All the sisters wore flannel pajamas and robes and slippers, each set handed down to them through a dizzying network of relatives and connections. The great-aunt in Milwaukee bought the clothes for her granddaughters, who in turn gave them to poorer cousins in New York, who in turn shipped them to Israel.

Until recently Dvorah had always gotten first pick. But now America’s return to short skirts and her own gain of several inches in height had resulted in most of the skirts and dresses falling shamefully shorter than midcalf, making them immodest and unwearable. But when they’d been younger, the clothes had been routed routinely from her to Dina to Chaya Leah.