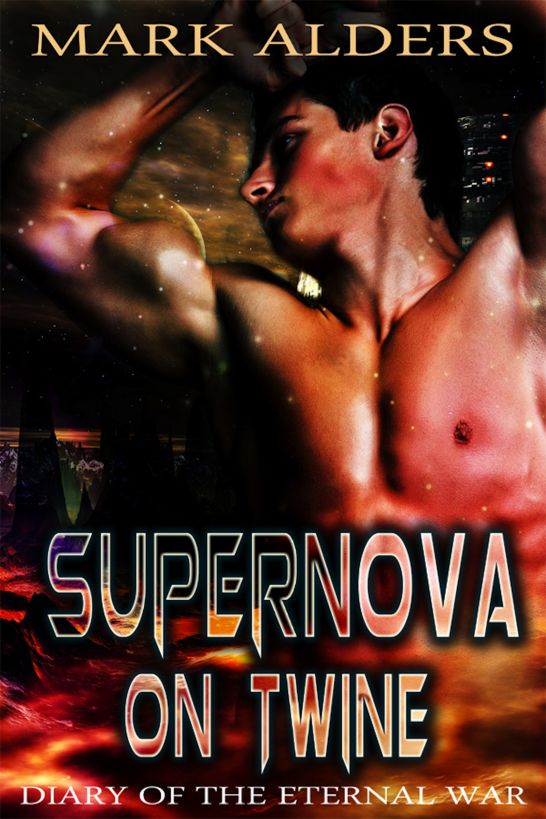 Love in
all its naked glory.

In the next thrilling episode of the Diary of the Eternal War,
Zane and company find themselves heading for Supernova on Twine,
humanity’s future defensive space station. The eternals, or time
vampires, have taken their homeworld, Parenthesis, into the future
to capture the station. The result will send ripples back in time
to expedite humanity’s capture and ensure the eternals have food
throughout all of history. Zane is determined to stop them at all
costs, but this time he’s not alone…literally. Motac, a coalition
eternal and on the side of good, resides within him. Together they
discover that not only can two beings live symbiotically for both
their mutual benefit, but there can be love too
—l
ove that can defeat evil, no matter
how great. Trouble is, the eternal threat is extremely great. Will
Zane and Motac’s new found alliance be enough? Or will Tink, Mirko
and all of Zane’s friends perish as Parenthesis prepares for its
first deadly strike?

Author’s
note: the stories that make up The Diary of the Eternal War are the
Pembroke Eve Chronicles spin-off. This series is presented episodic
style.

The
unauthorized reproduction or distribution of this copyrighted work
is illegal. Criminal copyright infringement, including infringement
without monetary gain, is investigated by the FBI and is punishable
by up to 5 years in federal prison and a fine of
$250,000.

Please
purchase only authorized electronic editions, and do not
participate in or encourage the electronic piracy of copyrighted
materials. Your support of the author’s rights is
appreciated.

This book is a work of
fiction. Names, characters, places, and incidents either are
products of the author’s imagination or are used fictitiously. Any
resemblance to actual events or locales or persons, living or dead,
is entirely coincidental.

All
rights reserved. Except for use in any review, the reproduction or
utilization of this work in whole or in part in any form by any
electronic, mechanical or other means, now known or hereafter
invented, is forbidden without the written permission of the
publisher.

Look for
us online at:

Diary of
the Eternal War Two

Zane, can you hear me?
The voice in
his mind was loud and dominating.

From a cold, dark corner of his thoughts, Zane replied,
Who are you?
He couldn’t
see anyone in front of him other than the Banshan warrior who was
escorting him to see Erkla. The voice had been coming from within
him. But how was that possible? He was possessed, a host to an
eternal. Since when did they communicate with their
victims?

I am Motac, the eternal within you, and have activated your
recording implant so I can talk to you without anyone getting
suspicious
.

Zane then realised he wasn’t moving his lips to speak, but
talking in his mind. It was true, the eternal within him
was
talking to him. That
alone was just as scary as seeing Mirko and Tink being taken away.
Anger welled up to consume the only place in his mind where he
resided.

Listen and listen very carefully,
Motac continued.
We don’t have much
time before we are presented to Erkla, so you must understand this
when I say, I am a coalition eternal and I am here to try and help
you.

Zane, without hesitation, thought,
Prove it, you bastard
.

I can’t do that yet, but soon I will show you all you need to
convince you I am speaking the truth and my intentions are to keep
you safe.

I don’t believe you.

If I were lying, why would I need to have this conversation
with you? If I was a shadow eternal, I would simply take you over
and drain the energy of your friends, sending you backwards and
forwards in time to accomplish that goal.

Zane remained silent. His thoughts
were
his own, he’d give Motac that
much. From what he knew of eternals, when they took over they
didn’t leave a trace of the one they occupied. He thought of poor
Thomas…how he’d committed suicide in the end to get rid of the
fucker. That gave him an idea.
Fine. But if
you do make me do anything to either Tink or Mirko that’ll hurt
them in any way…or any of my friends, I’ll kill myself…with you
inside me.

Zane was
taken through numerous crystalline corridors, caverns and
ante-chambers, deep into the heart of Parenthesis itself. He had to
admit if the alien reptiles were nasty looking from a distance,
they were even more so up close. They stank, too, like a
combination of sweaty socks and stale vomit.

Many
times Zane tried not to dry heave, resulting in watery eyes and a
lump in his throat. Motac had to remind him that if he did anything
to raise any suspicion, all of their lives could be at risk,
including Tink’s and Mirko’s and two members of the coalition, if
not many more.

He
breathed through his mouth.

Not long
after they entered the inner sanctum of Parenthesis crystalline
control—the area Mirko and Zoltan were trying to lead them to in
the first place—they came across Erkla. Zane could see why they
wouldn’t have made the journey to the heart of the eternal
homeworld in a blue fit. The place was heavily guarded with more
stinking Banshan warriors than he’d ever seen in one
place.

The
throne room
—for want of a better word—where Erkla sat was impressive. It
was also exclusive, and the leader of the shadow eternals sat
alone, overlooking his empire. There were many control stations
around him, but unlike on Tink’s realm-shifting spacecraft, the
eternals used living crystalline technology to do their
bidding.

Do exactly what I tell you
, Motac
said.
Any delay in your response will be
considered abnormal, and as such could put us all in
danger
.

“
Greetings, Motac,” the Banshan leader said. He got up from his
study, coming to greet Zane and the spy within him. “How is your
new body treating you?”

Zane
bowed. He didn’t know why, but he did. Perhaps it was Motac’s
influence within him. Perhaps it was his deep, desperate desire to
make sure nothing happened to Tink or Mirko. “My new body is goin’
okay.”

Don’t use any inflections. You’ll have to speak like me. Try
and pronounce everything as succinctly as you
can
, Motac said.

All right, keep your pants on
, Zane
chastised him in his mind, finding the experience quite
disorientating. Talking to three people, one of whom was inside his
mind, could get kind of tricky. This wasn’t going to be
easy.

There was
a moment of pause from Erkla, but to Zane it looked like the leader
was more preoccupied checking him out. After all, Zane’s cock was
there for all to see, him being naked. A Banshan’s genitals were on
the inside until required. He guessed the leader liked the look of
Zane’s appendage, by the amount of time he spent staring at
it.

When
Erkla had done a complete circuit of Zane, and with Motac telling
him to keep as still as possible while under scrutiny, the alien
lizard finally said, “I really don’t see why eternals would bother
with such a weak species like humans. Banshan are more than capable
of ensuring the eternals’ rule is complete.”

Motac said,
Tell him it’s because
humans are resourceful, curious and survivors
.

“
Bah! Humans are pathetic. They cannot last more than a few
days without water, a couple of weeks without food, and if naked,
no more than a few hours in an extreme environment. What good are
they, really?”

Say that the Banshan are the warriors while the humans are the
cattle. After all, the greatest colonies in the universe require
diversity, even if they are enslaved.

I’m not sayin’ that. Us humans have kicked eternal arse, and
we’ll do it again if we have to.

I admire your spirit, Zane, but remember, you’re me…so act
like it. The truth of the matter is that humans are easy to enter
and therefore easy to control. There are also plenty of you. Don’t
forget that.

Zane,
without anymore argument, replied, “Humans are a more compatible
vessel.” He left it at that.

The
Banshan snorted. “No matter what I think of them, the eternals will
rule no matter the species they inhabit. We are about to set course
for the first human defence space-station, Supernova on Twine.
Prepare yourself, Motac. You will be the new voice of the eternals.
The reason this human was chosen was because he is strong and knows
of our ways. His occupation will let others know that they cannot
resist. They will also know of our intent and our interests.
Hopefully, humans will resist less if they are more aware of the
consequences if they don’t comply.”

Zane bowed again. “We will destroy them if they
resist.”
Pigs arse we will. You Banshan
fuckers will get what’s coming to you, no damn
doubt
.

Erkla
gestured for them to leave his presence, but added, “Your first
task is to fetch me the spirit folk beings, Tink and Mirko. We have
a similar use for them as well.”

“
Yes, Erkla.” Zane left the throne room. Straight away the
guard who had escorted them to the heart of the empire was at their
side again. Zane remembered to breathe though his mouth. At least
now he knew Tink and Mirko were safe. He just hoped Zoltan was
reinserted into him…but he doubted it. After all, they would know
the cat being would need an eternal to keep Mirko alive…the matter
of which eternal probably wasn’t a concern for them.

In that
moment, Zane missed Zoltan.

Zoltan will be all right. He’s a survivor
.

You liked him?
Motac asked.

If you have to know, I kind of love the dude. What he did for
Mirko was amazin’ and I have nothin’ but respect for
him
.

Just like you’ll come to love me, I’m sure
.

Don’t count your chickens, buddy. You’ve got a long way to go
before I relax in my own mind with you around
.

“
Fuck, what a day I’ve been having,” Zane whispered. He thought
and felt it would be a better idea to verbalise his diary entries
because there was already way too much action going on in his mind
with Motac crammed in there.

You can’t start a diary entry like that
, Zane, Motac said.

I can start it however the hell I like, so butt the fuck out.
It’s my entry and my mind. You eternal bastards have to learn, us
humans like our own space
.

Forbidden to Love the Duke by Jillian Hunter
Wait for Dusk by Jocelynn Drake
The Phoenix Guards by Steven Brust
Virgin With Butterflies by Tom Powers
The Cupid War by Carter, Timothy
The Enemy Inside by Steve Martini
Alan Price and the Colossus of Rhodes (The Nephilim Chronicles) by Jonathan Yanez
The Legend of Pradeep Mathew by Shehan Karunatilaka
Call Home the Heart by Shannon Farrell
Sunburn (Book 1, The Events Trilogy) by Gorvine, Samuel