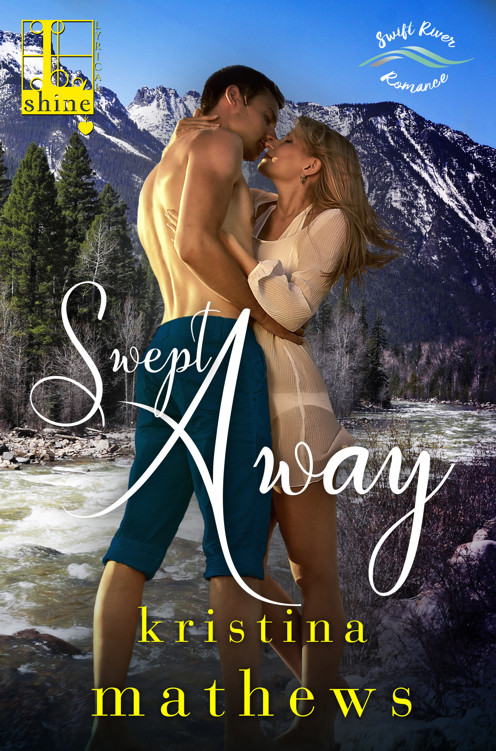 Carson Swift may look exactly like his twin brother Cody, but they’re as different as tie dye and camouflage. Reliable, responsible, and usually the designated driver, Carson is also over being his brother’s keeper, but suddenly his plans to break free are complicated by the woman they fish out of Hidden Creek . . .

Lily Price is not your typical damsel in distress. Infidelity, infertility, and downsizing provide a triple threat to her ego, but falling into the swollen river nearly ends her life. If not for the handsome stranger—make that two handsome strangers—she might not have had a chance at having a baby by any means necessary . . .

As Carson helps Lily overcome her fear of the river, she helps him save his rafting business from going under. She also saves him from abandoning all that is important to him in order to get a taste of freedom. Together they find that love is the ultimate adventure.

More Than A Game Series

To the extent that the image or images on the cover of this book depict a person or persons, such person or persons are merely models, and are not intended to portray any character or characters featured in the book.

To my husband and brother-in-law who went fishing one day, rescued a tourist, and inspired this story.

Many years ago I met a guy who spent his summers on the river. He had strong arms, an adventurous spirit, and funny tan lines on his feet. Our first trip together was a long weekend rafting on the Tuolumne River. It rained the whole time, and he was so manly, he didn’t need a tent. We ended up sleeping under an upturned raft. But I was hooked. On the guy, and the sport. He bought me a lifejacket long before he bought me any jewelry. A very romantic gift—he wanted to protect me and make sure I was able to join him in something that was a big part of his life.

Marriage, kids, and careers pulled us away from the river for a number of years. But a used bucket boat (as opposed to the modern self-bailers) and kids old enough to paddle have brought us back to the river. So what if the first time I’d been tossed overboard and hit my tailbone on a rock was ten days before my first Romance Writers of America national conference? It just provides more inspiration for future books.

And yes, Carson and Lily’s story was inspired by real life adventures. My husband and his brother went fishing one day and came back with a story of how they rescued a tourist from a swift moving river. I changed the brothers to twins and made the tourist a woman and the rest just burst forth like a natural spring. I hope you enjoy this story of love- the ultimate adventure.

“Man this water’s really pumping.” Carson Swift hiked a few steps ahead of his twin brother, Cody. His feet landed firmly on the familiar trail to Hidden Creek, but his thoughts were a million miles away. Make that eight hundred miles, give or take, depending on whether he took Highway 50 or Interstate 80 through Nevada. “With the water this high, I don’t think we’ll catch a lot of fish.”

“Good thing we have steaks in the fridge.” You’d think he was nine, not twenty-nine, by the way Cody trotted along excitedly, skittering small bits of gravel along the well-worn path. He was too damn happy with his life. “We’re not pulling anything out of the river today.”

“At least it’s finally warming up.” What a coward. Carson had dragged his brother out here to have a serious conversation. Instead, he was discussing water conditions. The weather.

“I thought winter would never end.” Cody would probably still catch a fish or two. He had that kind of luck. Women and trout landed at his feet without much effort. “But summer’s coming and it’s going to be a hot one.”

Another summer stretched out in front of them. Long, hot days on the river. Longer, hotter nights at the Argo—throwing back a few beers, shooting pool, picking up pretty strangers. Who wouldn’t want the easy life of a whitewater guide?

“June bookings look pretty solid.” Carson tried to look at the sunny side of the creek. Business was good. That wasn’t why he wanted out.

“We should get quite a few bachelorette parties.” Cody had suggested advertising in the regional bridal magazines. His idea was to offer Girls’ Weekend trips, complete with a selection of local wines and discounted cabin rentals. It was one of the few times he’d taken an interest in the business itself.

Most of the time Cody was all about the fun. Hot babes and cold beer on a warm summer night were the only things he seemed to care about. Except in winter, when he’d head up to the mountains to ski. Leaving Carson to take care of repairs and maintenance.

“Plenty of family trips too.” All those intact families. Smiling. Laughing. Bonding. Being there for each other. Reminding Carson of what he didn’t have.

“Don’t forget bachelor parties.” Cody was always up for a good time. The man lived his life as though it was one big party. A lot of guys would give up their flat screen TVs to walk in his sandals. “Man, we’ve got the best job in the world.”

“Sure. A day’s work for us is a vacation for most people.” Carson still loved the heart-stopping rapids and Zen-like calm stretches on the river. He still loved helping people connect with nature and discover a little something about themselves along the way. And he still loved the constant, yet ever-changing force of the river.

It was the change that called to him now. He might as well be guiding the jungle boats at Disneyland. He was seeing the same sights, telling the same jokes over and over again until he felt like one of the automated characters. He needed a change of pace. A change of scenery. A change of company.

“Yeah, we’ve got it made.” Cody trotted along like a kid on the first day of summer vacation. He had no idea his brother didn’t share his enthusiasm for the status quo. Carson was afraid of becoming stagnant. A breeding ground for bad blood.

It wasn’t that Cody was a bad guy. He was just there. Always. They lived together. Worked together. Ate together. The only thing they didn’t do was sleep together. Although there had been women who would have been willing to take on them both. Cody probably could have been talked into it, but it was bad enough sharing breakfast and small talk with his brother’s dates. Carson wasn’t about to share anything more.

He should just get it over with. Say the words.
I’m leaving
. But the lump in his throat rose like the spring runoff, drowning out his voice. If he could think of another way to get Cody to grow up already, he’d take it. But the only way to get him to change would be to force it on him. He had to toss his brother overboard and hope he’d come up swimming.

“What the hell?” Cody skidded to halt. “Is that woman actually swimming? In this high water?”

Damn. This water is cold.

Lily came up for air, sputtering and spitting out a mouthful of river water. She grasped for something—anything she could hold onto. But the current was too fast, too strong for her to grab hold of anything. She tried to find her footing, but the force of the river kept her from getting her legs underneath her. Quickly she realized that it was probably for the best. If anything, she could end up breaking a leg if she slammed against a rock. Or worse, her foot could become entrapped and it wouldn’t be long before the river pulled her under, drowning her.

She wondered how long it would take to find her body. Would some fisherman stumble upon her days, weeks, or even months from now? Or would the current eventually pull her downstream, where she’d wash up lifeless on the shore?

For the first time in her adult life, Lily was thankful she was childless. There was no baby to leave motherless. Left to be raised by her rat-bastard ex-husband.

Water shot up her nose, and Lily coughed. She tried once again to regain control of her body, but she was caught in a force too powerful to fight.

The movies were all wrong. Her life didn’t flash before her eyes. Nothing but water and sky and regret rushed past her as she was carried downstream.

Lily didn’t want her last conscious thought to be about her ex. About her failures.

As a wife. A daughter. An employee.

A woman who hadn’t been able to conceive.

She tried to think of something positive. Relaxing her body, she willed her last thoughts to be about something beautiful. Like Hidden Creek. She’d always loved it here. The smell of the pines and the whisper of the wind through the trees. How the night sky was so clear and the stars shone so brightly she felt as if she could reach up and touch them. Blackberries that would be ripe in another month. She could bake a pie in the cozy kitchen of her cabin.

Her cabin. The one thing she’d fought for in the divorce. The place where she’d hoped to raise a family.

But now it would go back to Brian.

Over my dead body.

With a new sense of urgency, Lily fought back against the current, flailing about as if her life depended on it.

Carson turned his attention to the river. He expected to see the slow, graceful movements of a woman out for an afternoon swim. He expected smooth, easy strokes and efficient flutter kicks as she propelled herself through the water. He expected to pass her by without another thought. Instead, he felt his muscles tighten, his heart rate accelerate, and his vision narrow as the realization that she was in trouble hit him like a flash flood.

Instinct kicked in. He dropped his rod, pulled his keys and phone from his pocket, and raced into the raging river. He dove into the waist-deep water, swimming aggressively toward her. The current was strong. He had to be stronger.

“Just relax. I’ve got you.” He kept his voice steady, projecting strength, confidence, and competence. He couldn’t let her panic.
He
knew he was trying to save her, but there was no way of knowing what was going through her mind.

Star Wars - The Tale of the Aiwha Pod by Ryan Kaufman
Newfoundland Stories by Eldon Drodge
Band of Demons (The Sanheim Chronicles, Book Two) by Rob Blackwell
Perfect Specimen by Kate Donovan
The Legend of the Firewalker by Steve Bevil
The Letters by Suzanne Woods Fisher
Thorazine Beach by Bradley Harris
Blue Collar and Proud of It: The All-In-One Resource for Finding Freedom, Financial Success, and Security Outside the Cubicle by Joe Lamacchia, Bridget Samburg
The Kid Who Ran For President by Dan Gutman
Gossamer by Lois Lowry