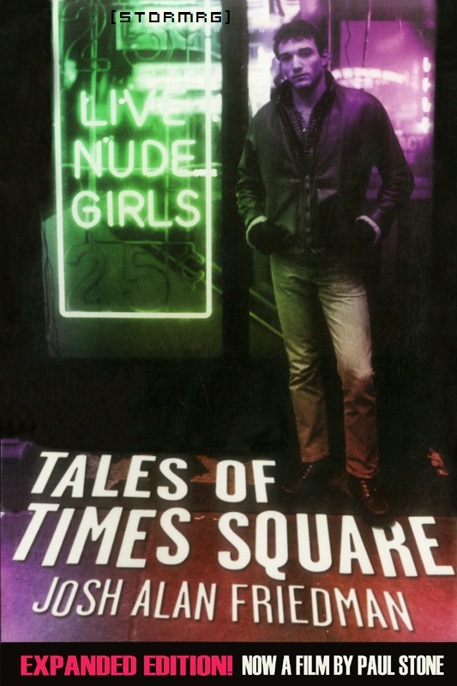 Praise for
Tales of Times Square

“Friedman manages to paint a devastating portrait of a culture of vice...

Tales of Times Square
can be read as a brief for action.”

“An entertaining obscene postcard of Times Square on the brink.”

“Short stories that are the best I’ve ever seen about Times Square. I couldn’t put it down. I recommended [Friedman] for a Pulitzer Prize.”

“Reminiscent of
New Yorker
writing at its best, but with much more humor.... Unforgettable, and good enough to turn Jimmy Breslin or Studs Terkel pale mauve with envy.”

“The most compelling reading to come along since the attorney general’s report....This book made me want to shower.”

to Persons Living Or Dead

When Sex Was Dirty

To My Darling Peg

AFTER THE DEATH OF BURLESQUE

TELL ALL THE GANG ON 42ND STREET!

The Princess of 42nd Street

The Crystal Ball of 42nd Street

Dancing on the Frying Pan

Pee Wee Is Not a Happy Man

In Search of the Longest Stiletto

Queen of the Gang-Bang

Save Our 42nd Street

Twenty-Four Hours On the Square

If Marquees Could Talk

The Ol’ In And Out

Twenty-Four Hours On the Square (Part III): Greatest of Grease

WHEN SEX WAS DIRTY

The Rise and Fall of Al Goldstein

Afterword: I Gave My Regards to Broadway

This is a 21st-anniversary edition of
Tales of Times Square
. More than any neighborhood I can imagine, Times Square is a character itself. It occupies a fifth dimension, with its own molecules and voltage, its own history and sex life, and seemingly has a will of its own. A lot has gone down since the first edition. The “New 42nd Street” may be the greatest transformation to hit the streets since—for those who recall—the “New Nixon.” I address these events in a new Afterword.

We’ve also added six chapters from a lesser-known collection,
When Sex Was Dirty
. I wrote these pieces soon after
Tales
, and they seem to fit.

“Save Our 42nd Street” was offered as sheer conjecture. The police officers’ names in “Cops and Skells” and “Pross and Pimps” were changed so that they could continue to work in their sensitive positions.

The places are gone; many characters have died. But their ghosts probably still wander 42nd Street, and you never know which face in the crowd might be one of them.

Izzy Grove—the “Ghetto Avenger,” as he was once known in the twenties as a top middleweight contender—is bracing himself for the street any day now. Loews Corporation, owners of the old show-biz building on 46th Street off Broadway where Izzy’s kept a $60-a-month “office” for seventeen years, is giving him the boot. With the market ripe, Loews wants back this little space. And Izzy’s become one scared seventy-three-year-old pug.

“I got tears in my eyes just talking about it,” says Izzy, dabbing under his box glasses with a hankie. “They cut my phone, they knock down my door. I live right, I behave myself, I’m not a bum. I never been convicted of a crime or felony, I’m no tough guy. People that see me, unnerstand, I don’t want them to pity me. People put money in my—looka—” Izzy pulls out a wad of crumpled bills and phone numbers—officials of housing bureaucracy, friends, connections—but none of them do any good. His fingers are twisted, nails fungous; his hands have small lacerations, his ears look like doughy biscuits. “I don’t have to cry to ya, it’s not pleasant. Sure, if I wanted to I can go ahead and work for fifty bookmakers and ticket hustlers. My wife, Alice, she rest in peace, always told me that instead of being a tough guy, a shylock, a racket guy, a numbers runner or a bookmaker, to go into legitimate business where people will have respect for ya.”

Grove scored
the
first knockout at the old Madison Square Garden in the Twenties. He went on to kayo “three out of four former world
champeens
,” in bouts at the Polo Grounds, Ebbets Field, Yankee Stadium. “I got ten columns from Damon Runyon in the
New York American
,” he boasts. “But a fella called Dan Parker, sports editor of the
Daily Mirror
, is who made me.” In the Thirties, Grove became a Broadway booking agent and a regular of Lindy’s society. “I wasn’t MCA or General Amusement or the William Morris office—those are the key bookers. The rest is all amateur night in Dixie.” Nevertheless, Grove booked Ellington, Cab Calloway, Lionel Hampton, dozens of big bands at dances for some twenty years. “But ya see, truefully, uh, today it ain’t here anymore, because people don’t want acts.” His next career—pasting up fight posters for the Garden, pushing a shopping cart and bucket of glue—began to take precedence. It’s been his meal ticket for the past thirty years, but lately they haven’t been calling.