BOOK: The Art and Craft of Approaching Your Head of Department to Submit a Request for a Raise
>>DOWNLOAD HERE >>READ ONLINE NOW
ads 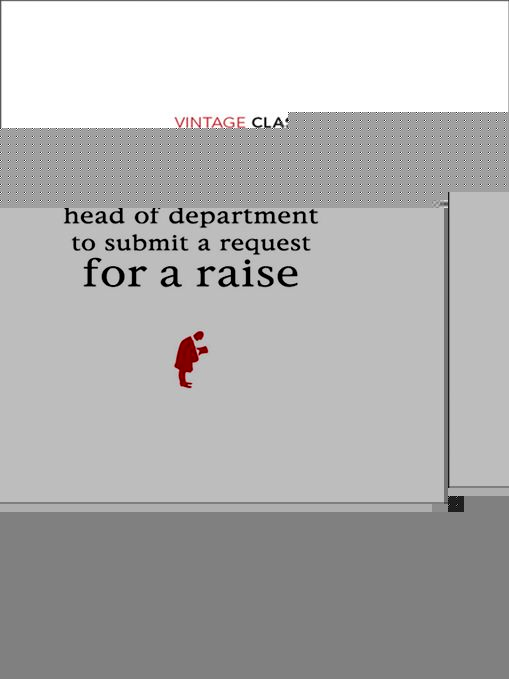 "Perec is famous, not to say notorious, for his puns, parody, circular plotting, skittish wit and word-wizardry of all sorts'
Independent
"

Georges Perec (1936–82) won the Prix Renaudot in 1965 for his first novel
Things: A Story of the Sixties
, and went on to exercise his unrivalled mastery of language in almost every imaginable kind of writing, from the apparently trivial to the deeply personal. He composed acrostics, anagrams, autobiography, criticism, crosswords, descriptions of dreams, film scripts, heterograms, lipograms, memories, palindromes, plays, poetry, radio plays, recipes, riddles, stories short and long, travel notes, univocalics, and, of course, novels.
Life A User’s Manual
, which draws on many of Perec’s other works, appeared in 1978 after nine years in the making and was acclaimed a masterpiece to put beside Joyce’s
Ulysses
. It won the Prix Médicis and established Perec’s international reputation.

David Bellos, the translator, is Professor of French and Comparative Literature and Director of the Program in Translation and Intercultural Communication at Princeton University.

In 2005 David Bellos was awarded the Man Booker International Translator’s Prize for his many translations of the novels of the distinguished Albanian writer Ismail Kadare. He is the author of several works on Balzac, the prize-winning biography
Georges Perec: A Life in Words
, and a biography of Romain Gary, published in 2010.

W or the Memory of Childhood

Things: A Story of the Sixties

First published in France with the title
L’Art et la manière d’aborder son chef de service pour lui demander une augmentation
in December 1968 in the fourth issue of the journal
Enseignement programmé
(Hachette/Dunod), then as a book by Hachette Littératures in 2008

A flow-chart designed by Jacques Perriaud and adapted into English

F
orty years ago there was no Windows, web, or email; there were no laptops and the Mac Classic had not been invented. But there were computers – huge machines in secure, air-conditioned vaults, powered by sizeable electricity substations and maintained by teams of men in white coats known as boffins. Such electronic monsters were used to crunch numbers for NASA and the nuclear deterrent by mathematicians, physicists, aeronautical engineers and astronomers. But some far-sighted minds wondered if these daunting machines could also be used, somehow or other, in the creative arts. Around 1968, a French computer company set itself the challenge of finding artists willing to have a go at using the machines that it made. By serendipity more than careful planning, the challenge ended up on the desk of a little-known writer called Georges Perec. The unclassifiable entity here called
the art and craft of approaching your head of department to submit a request for a raise
is the unexpected, comical and moving outcome of an unlikely encounter.

The initial idea came from Jacques Perriaud at the Computing Service of the Humanities Research Centre in Paris. To challenge a writer to use a computer’s basic mode of operation as a writing device, he sketched out the procedure that an employee would need to follow to obtain an increase in pay in some large organisation. Then he broke it down into its individual steps and laid the procedure out as an algorithm, or flow-chart. As is well-known to all who work for big firms or government departments, such procedures do not always succeed on their first iteration. Perriaud’s flow-chart includes ample opportunities for recursion, or going back to square one.

Georges Perec accepted the challenge to write as a computer functions, but characteristically, he seems to have negotiated a number of changes to the ground-plan before he started. At all events, the flow-chart that he used, reproduced on p. viii, has comical details like a wastepaper bin and strange loops that may or may not have come from the mind of the original designer.

Georges Perec, born 7 March 1936, had recently been co-opted to full membership of a rather special group that called itself Oulipo, short for
Ouvroir de littérature potentielle
, or ‘Workshop for Potential Literature’. It was founded fifty years ago, in 1960, by the writer Raymond Queneau and the mathematician François Le Lionnais with the purpose of exploring the possible uses of mathematics and formal modes of thought in the production of new literature. Oulipo sought to invent new kinds of rules for literary composition, and also to explore the use of now-forgotten forms in the literatures of the past. Perhaps the most famous of these ancient devices – famous nowadays almost exclusively because of the work of Georges Perec – is the lipogram, which involves writing in a restricted set of characters, that is to say, without one or more letters of the alphabet. But the idea of concocting a story that proceeds by a set of programmed choices between different outturns at each juncture was also a subject of some interest. Vaguely referred to as ‘matrix literature’, the idea, similar to the structure of ‘Tracker Books’ for children, gave rise to a short but also very long experiment by Raymond Queneau called
Un Conte à Votre Façon
, or ‘A Story As You Like It’, which has now been put on the web in English translation. Each sentence is followed by a question with two possible answers. The reader chooses one of the answers, and goes on to the appropriately numbered sentence. If you make the other choice, the text directs you to a different sentence. In that way, from a small set of cunningly designed propositions an infinitely large set of stories can be made.

Perec had heard about this exercise but chose to deal quite differently with the mock-algorithm he had in front of him. Instead of leaving the reader to navigate around a labyrinth of yes/no questions and answers as Queneau had done, he chose to write out
in extenso
the progress of an imaginary computer-mind as it iterates a set of choices in pseudo-real time. He also chose to simulate the speed and tireless repetitiveness of a computer program by abandoning all forms of punctuation as well as the distinction between upper- and lower-case letters. The result is an almost unreadable fifty-page text that looks like (but actually is not) a single, breathless sentence.

the art and craft of approaching your head of department to submit a request for a raise
was first published in an academic review devoted to what was then called Programmed Learning, or computer-assisted education, where it lay dormant for over forty years. However, around the time of its first publication, Perec was asked by his German translator, Eugen Helmle, if he might come up with something suitable for broadcast on radio. He did: an amazing though quite different simulation of a computer taking a poem by Goethe to pieces, first broadcast in German as
Die Maschine
(an English translation has appeared in
The Review of Contemporary Fiction
, XXIX, 1, 2009). The huge success of this irreverent radio play prompted requests for more such material, and Perec turned back to his other ‘computer’ exercise,
the art and craft …
for inspiration. He saw that the very design of the exercise relied on a set of six distinct and identifiable operators that could be ascribed to different voices: the situation (‘you go to see your head’); the question (‘is he? …’); the positive hypothesis (‘if he is …’); the negative hypothesis (‘if he isn’t …’); the decider (‘he isn’t …’); and the outcome (‘so off you go …’). With the help of Helmle, who had a lot of radio experience, Perec produced a text that was broadcast as
Wucherungen
(‘
The Raise
’) on Saarland Radio in November 1969. The original French text was then picked up by Marcel Cuvelier – the long-standing director of the plays of Eugène Ionesco at the Théâtre de la Huchette, in which he also acted – as an ideal script for a non-figurative, almost static, and utterly hilarious stage production. Georges Perec finally added
playwright
to the list of literary professions he had mastered.

The dramatic version had a successful run in Paris in 1970 but its triumph came in 1972, once again in German translation, as
Die Gehaltserhöhung
, in productions that were more agit-prop than absurdist, in Munich, Münster and Wiesbaden. The play is now often performed in France by amateur and professional companies and has been translated into Italian and Swedish and probably other languages too, but it has never been staged in English.

How to Not Write Bad: The Most Common Writing Problems and the Best Ways to Avoidthem by Ben Yagoda
The Crescent Spy by Michael Wallace
The Desolate Guardians by Matt Dymerski
Pursue the Past: Samair in Argos: Book 1 by Michael Kotcher
Analog Science Fiction And Fact - June 2014 by Penny Publications
Rest in Peace by Frances Devine
Burn: A Novel by Linda Howard
Sarah McCarty by Slade
Hannah Smart, Operation Josh Taylor by Melody Fitzpatrick
Echo, Mine by Georgia Lyn Hunter