Read The Beginning of Infinity: Explanations That Transform the World Online

The Beginning of Infinity: Explanations That Transform the World 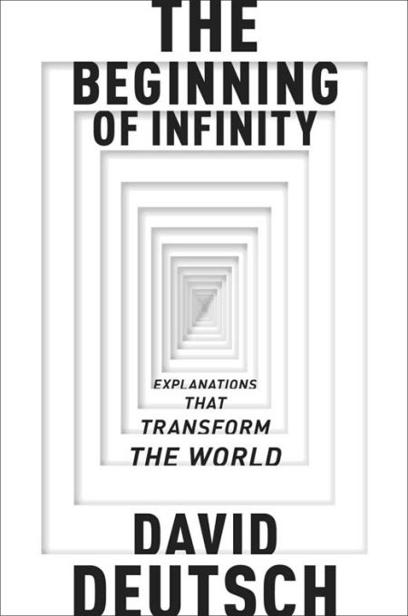 The Beginning of Infinity

Explanations that Transform the World

All rights reserved. Without limiting the rights under copyright reserved above, no part of this publication may be reproduced, stored in or introduced into a retrieval system, or transmitted, in any form or by any means (electronic, mechanical, photocopying, recording or otherwise) without the prior written permission of both the copyright owner and the above publisher of this book

Grateful acknowledgement is given for permission to reproduce the following material: Coma cluster of galaxies (p.
34
), Palomar Sky Survey, California Institute of Technology, Space Telescope Science Institute; Popper’s translation of Xenophanes (pp.
230
,
231
,
238
), the Popper Library at the University of Klagenfurt, courtesy of Dr Manfred Lube. Every attempt has been made to trace copyright holders. The author and publisher will gladly make good in future printings any errors or omissions brought to their attention.

1. The Reach of Explanations

5. The Reality of Abstractions

6. The Jump to Universality

8. A Window on Infinity

12. A Physicist’s History of Bad Philosophy

14. Why are Flowers Beautiful?

15. The Evolution of Culture

16. The Evolution of Creativity

I am grateful to my friends and colleagues Sarah Fitz-Claridge, Alan Forrester, Herbert Freudenheim, David Johnson-Davies, Paul Tappenden and especially Elliot Temple and my copy-editor, Bob Davenport, for reading earlier drafts of this book and suggesting many corrections and improvements, and also to those who have read and helpfully commented on parts of it, namely Omri Ceren, Artur Ekert, Michael Golding, Alan Grafen, Ruti Regan, Simon Saunders and Lulie Tanett.

I also want to thank the illustrators Nick Lockwood, Tommy Robin and Lulie Tanett for translating explanations into images more accurately than I could have hoped for.

Progress
that is both rapid enough to be noticed and stable enough to continue over many generations has been achieved only once in the history of our species. It began at approximately the time of the scientific revolution, and is still under way. It has included improvements not only in scientific understanding, but also in technology, political institutions, moral values, art, and every aspect of human welfare.

Whenever there has been progress, there have been influential thinkers who denied that it was genuine, that it was desirable, or even that the concept was meaningful. They should have known better. There is indeed an objective difference between a false explanation and a true one, between chronic failure to solve a problem and solving it, and also between wrong and right, ugly and beautiful, suffering and its alleviation – and thus between stagnation and progress in the fullest sense.

In this book I argue that all progress, both theoretical and practical, has resulted from a single human activity: the quest for what I call good explanations. Though this quest is uniquely human, its effectiveness is also a fundamental fact about reality at the most impersonal, cosmic level – namely that it conforms to universal laws of nature that are indeed good explanations. This simple relationship between the cosmic and the human is a hint of a central role of
people
in the cosmic scheme of things.

Must progress come to an end – either in catastrophe or in some sort of completion – or is it unbounded? The answer is the latter. That unboundedness is the ‘infinity’ referred to in the title of this book. Explaining it, and the conditions under which progress can and cannot
happen, entails a journey through virtually every fundamental field of science and philosophy. From each such field we learn that, although progress has no necessary end, it does have a necessary beginning: a cause, or an event with which it starts, or a necessary condition for it to take off and to thrive. Each of these beginnings is ‘the beginning of infinity’ as viewed from the perspective of that field. Many seem, superficially, to be unconnected. But they are all facets of a single attribute of reality, which I call
the
beginning of infinity.

1
The Reach of Explanations

Behind it all is surely an idea so simple, so beautiful, that when we grasp it – in a decade, a century, or a millennium – we will all say to each other, how could it have been otherwise?

To unaided human eyes, the universe beyond our solar system looks like a few thousand glowing dots in the night sky, plus the faint, hazy streaks of the Milky Way. But if you ask an astronomer what is out there in reality, you will be told not about dots or streaks, but about
stars
: spheres of incandescent gas millions of kilometres in diameter and light years away from us. You will be told that the sun is a typical star, and looks different from the others only because we are much closer to it – though still some
150
million kilometres away. Yet, even at those unimaginable distances, we are confident that we know what makes stars shine: you will be told that they are powered by the nuclear energy released by
transmutation
– the conversion of one chemical element into another (mainly hydrogen into helium).

Some types of transmutation happen spontaneously on Earth, in the decay of radioactive elements. This was first demonstrated in 1901, by the physicists Frederick Soddy and Ernest Rutherford, but the concept of transmutation was ancient. Alchemists had dreamed for centuries of transmuting ‘base metals’, such as iron or lead, into gold. They never came close to understanding what it would take to achieve that, so they never did so. But scientists in the twentieth century did. And so do stars, when they explode as supernovae. Base metals can be
transmuted into gold by stars, and by intelligent beings who understand the processes that power stars, but by nothing else in the universe.

As for the Milky Way, you will be told that, despite its insubstantial appearance, it is the most massive object that we can see with the naked eye: a
galaxy
that includes stars by the hundreds of billions, bound by their mutual gravitation across tens of thousands of light years. We are seeing it from the inside, because we are part of it. You will be told that, although our night sky appears serene and largely changeless, the universe is seething with violent activity. Even a typical star converts millions of tonnes of mass into energy every second, with each
gram
releasing as much energy as an atom bomb. You will be told that within the range of our best telescopes, which can see more galaxies than there are stars in our galaxy, there are several supernova explosions per second, each briefly brighter than all the other stars in its galaxy put together. We do not know where life and intelligence exist, if at all, outside our solar system, so we do not know how many of those explosions are horrendous tragedies. But we do know that a supernova devastates all the planets that may be orbiting it, wiping out all life that may exist there – including any intelligent beings, unless they have technology far superior to ours. Its neutrino radiation alone would kill a human at a range of billions of kilometres, even if that entire distance were filled with lead shielding. Yet we owe our existence to supernovae: they are the source, through transmutation, of most of the elements of which our bodies, and our planet, are composed.

There are phenomena that outshine supernovae. In March 2008 an X-ray telescope in Earth orbit detected an explosion of a type known as a ‘gamma-ray burst’, 7.5 billion light years away. That is halfway across the known universe. It was probably a single star collapsing to form a black hole – an object whose gravity is so intense that not even light can escape from its interior. The explosion was intrinsically brighter than a million supernovae, and would have been visible with the naked eye from Earth – though only faintly and for only a few seconds, so it is unlikely that anyone here saw it. Supernovae last longer, typically fading on a timescale of months, which allowed astronomers to see a few in our galaxy even before the invention of telescopes.

Another class of cosmic monsters, the intensely luminous objects known as
quasars
, are in a different league. Too distant to be seen with
the naked eye, they can outshine a supernova for millions of years at a time. They are powered by massive black holes at the centres of galaxies, into which entire stars are falling – up to several per day for a large quasar – shredded by tidal effects as they spiral in. Intense magnetic fields channel some of the gravitational energy back out in the form of jets of high-energy particles, which illuminate the surrounding gas with the power of a trillion suns.

Conditions are still more extreme in the black hole’s interior (within the surface of no return known as the ‘event horizon’), where the very fabric of space and time may be being ripped apart. All this is happening in a relentlessly expanding universe that began about fourteen billion years ago with an all-encompassing explosion, the Big Bang, that makes all the other phenomena I have described seem mild and inconsequential by comparison. And that whole universe is just a sliver of an enormously larger entity, the multiverse, which includes vast numbers of such universes.

The physical world is not only much bigger and more violent than it once seemed, it is also immensely richer in detail, diversity and incident. Yet it all proceeds according to elegant laws of physics that we understand in some depth. I do not know which is more awesome: the phenomena themselves or the fact that we know so much about them.

How
do we know? One of the most remarkable things about science is the contrast between the enormous reach and power of our best theories and the precarious, local means by which we create them. No human has ever been at the surface of a star, let alone visited the core where the transmutation happens and the energy is produced. Yet we see those cold dots in our sky and
know
that we are looking at the white-hot surfaces of distant nuclear furnaces. Physically, that experience consists of nothing other than our brains responding to electrical impulses from our eyes. And eyes can detect only light that is inside them at the time. The fact that the light was emitted very far away and long ago, and that much more was happening there than just the emission of light – those are not things that we see. We know them only from theory.

Raising Blaze by Debra Ginsberg
All That I Need (Grayson Friends) by Ray, Francis
Lone Star Justice by Scott, Tori
Grave Intentions by Sjoberg, Lori
The Virtuosic Spy 01 - Deceptive Cadence by Kathryn Guare
Daughter of the King by Lansky, Sandra
The Enforcer (Men Who Thrill Book 1) by Blue, Kaye
Donor, The by FitzGerald, Helen
Bronagh by L. A. Casey
The Way You Look Tonight by Richard Madeley