The Devils Highway: A True Story 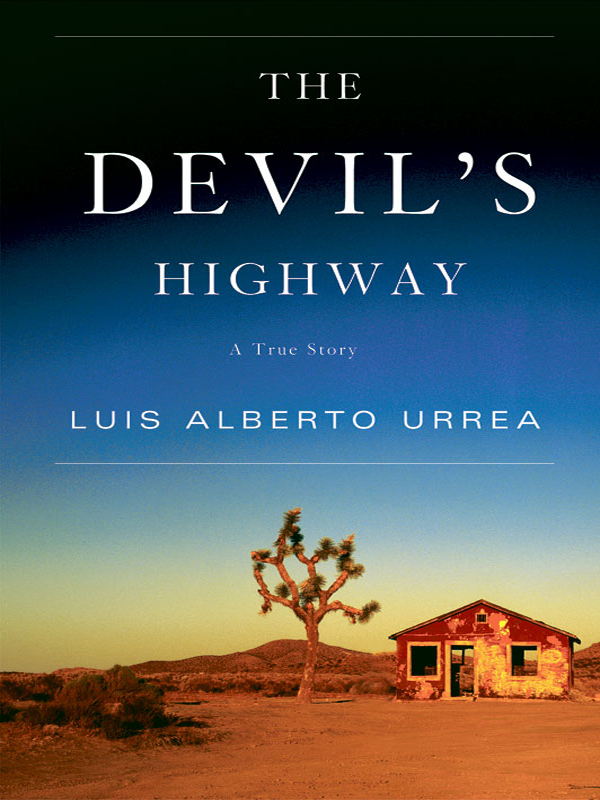 The Little, Brown and Company name and logo are registered trademarks of Hachette Book Group

PART ONE: CUTTING THE DRAG

Chapter 1: The Rules of the Game

Chapter 3: The Coyote and the Chicken

Chapter 5: Jesús Walks Among Us

Chapter 7: A Pepsi for the Apocalypse

Chapter 9: Killed by the Light

Chapter 13: The Trees and the Sun

“A reading of
The Devil’s Highway
will undoubtedly brace your soul and remind you that all of us, rich or poor, brown, white, black, or yellow, are traveling through these parts for only a little while. … This intense and somehow, despite all the torture and death and betrayal it stands as a witness to, congenial book gives some of [those who’ve died crossing the border] the chance, however briefly, to cross back over the final border and return to the light.”

“Luis Alberto Urrea ventured into the world of
pollos
and
polleros,
and his book rings with the authenticity and authority of an eyewitness. At the same time, he writes with empathy and insight about the migrants and the agents he accompanied into the wilderness. Above all, the tale he tells in
The Devil’s Highway
comes vividly alive with a richness of language and a mastery of narrative detail that only the most gifted of writers are able to achieve.”

“Urrea’s prose takes you right down to the desert floor as the men struggle to survive, in the same way Jon Krakauer put you atop Mount Everest in his book
Into Thin Air.
”

“A powerful, almost diabolical impression of the disaster and the exploitative conditions at the border. Urrea shows immigration policy on the human level.”

“Luis Alberto Urrea’s approach is a smart one: instead of writing a dry, fact-based piece of journalism littered with excerpts from official documents, he paces the book like a novel, full of detail and emotion. He spends time with the border patrol, showing the good and the bad. He doesn’t make martyrs out of the walkers. Instead of railing passionately against the Mexican and American governments—his sympathy clearly leans toward those who try to cross—he saves all the facts and figures for the last chapter, presenting them calmly. By then, no matter what your opinion on border policy, you’ve been sucked in by the story and characters. The writing is exceptional. The descriptions of the desert’s beauty are poetic. … It’s a beautiful book about a horrible trip.”

“The best thing I’ve read in years. Like his brilliant
Across the Wire,
Luis Urrea’s
The Devil’s Highway
is rich, intimate, powerful, terrifying, and absolutely necessary. Everyone should read this book.”

“A painstaking, unsentimental, and oddly lyrical chronology of the traveling party’s horrific trek through the Sonora. … Patient, well-crafted, and heartbreaking.”

“Urrea has been preparing to tell this story his whole career, and he does it brilliantly. He’s a natural investigator, alive to all the galling ironies of policy, prejudice, and circumstance, and he knows the terrain. …
The Devil’s Highway
is strong medicine: a grisly parable, but an ultimately fitting tribute to the dead.”

“From the sad personal effects of the dead men to the unexpected poetry of a survivor’s police testimony, Urrea has created a full-blooded narrative.”

“Tragic drama puts a human face on the foibles of mankind. Luis Urrea has put a face on one of the great tragedies of our time, death and survival on the U.S.-Mexican border. Like the ancient Greek plays,
The Devil’s Highway
elevates the death of the Yuma 14 to the role of tragic heroes. So we can say a new genre is born in our land; call it Frontera tragic drama.”

“Luis Urrea writes about U.S.-Mexican border culture with a tragic and beautiful intimacy that has no equal. … His uncanny ability to remain perched on the hyphen between two countries/identities as a careful observer of both worlds—of how they blur and yet remain separate—is the unique gift of
The Devil’s Highway
. … The book’s rare power is that it is both epic in scope—a trek through the wilderness in search of ‘the promised land’—and intensely personal.”

“A tour de force account of an adventure unlike the ones you’re used to reading.”

“Sublimely written. … Urrea puts all his skills to their best use in telling how and why an ordinary event—an illegal border crossing— went so terribly wrong.”

“Luis Alberto Urrea stuns us into judgment with a poetically austere account of the tragedy that he calls ‘the big die-off, the largest death event in border history.’ Urrea has a talent commensurate to the task.”

“Dramatic as a Tolstoy novel, full of hope and injustice, with overtones that are positively biblical. … Urrea’s own gift for precise and original language should put this book on the map.”

“Impassioned and poetic. … Urrea has written one of the great sur-realistic tragedies of the global age. He has captured the fantastic and incongruous set of forces, images, and happenings that make up the contradictions that are the borderlands.”

“
The Devil’s Highway
is a stunning book: powerful, poetic, passionate, and moving. It takes a single tragic incident, refracts it through history and mythology, and uses the result not only to examine the relationship between the rich and the poor, the weak and the powerful, but to illuminate the nature of human beings at their most desperate, their most devious, and their most courageous. Quite simply, it’s superb.”

“Few authors could write so entertainingly about such tragedy, fewer yet could do so with authority, and perhaps only one could be fair to the U.S. Border Patrol at the same time. Luis Urrea has a large heart and a wicked wit, and has written a wonderful book.”

“An important book—one that is beautifully written as well as shocking. If you read it, you will never forget about the untold scores of men and women—and children—who die every year in the dead-liest stretch of desert in America.”

“A masterstroke, an instant classic of the literature of that brave new world of our future we call
la frontera,
the border. Urrea writes with wit, passion, skill, and love. His is a very human book about a very human tragedy happening every single day in the deserts around us.”

“A riveting account of the 2001 border crossing of twenty-six Mexican men into the stretch of Arizona desert commonly called the Devil’s Highway—a nod to its ghastly history of rotting corpses and scorching conditions. Urrea’s exhaustive research and incisive analysis provide searing sociopolitical context, while his poetic prose viscerally captures the group’s horror at being abandoned by their guide and the ritualistic death march that claimed fourteen lives.”

“Take a walk on the dead side. The largest folk movement in human history is taking place on the U.S.-Mexican border. Nobody talks about it. This slaughterhouse fries and mangles at least 400 people a year. Nobody talks about it.
The Devil’s Highway
is coming to Main Street. Open your ears and eyes, wash the blood over your hands, and read Luis Urrea. We gotta talk. Now.”

“Urrea can cut loose and surrealistic when the story warrants it, but just as nimbly rein in to focus on facts. … Those familiar with Cormac McCarthy’s western novels will undoubtedly hear familiar tones in the mythic ring of some of Urrea’s phrasing.”

“With great wit and pathos, the author skillfully recreates the events leading to the walk across the border that killed so many so mercilessly. … A poignant and harrowing story everyone should read.”

“A stunning work of narrative journalism that puts a much-needed face on a notoriously divisive issue.”

“Artful. … Confident and full of righteous rage, Urrea’s story is a well-crafted mélange of first-person testimony, geographic history, cultural and economic analysis, poetry, and an indictment of immigration policy.”

“Powerful. … A harrowing journey from the streets of Veracruz to a morgue in Arizona. … What
The Devil’s Highway
does is personalize human misery on so vast a scale that it is usually portrayed exclusively in statistics.”

“Shocking. … Urrea is able to recreate the ill-fated crossing with the startling accuracy of an eyewitness. …
The Devil’s Highway
is a stunning contribution to the literature of current affairs and has all the potential to incite outrage and, most hopefully, change.”

“A border story sung in the voice of a true border son, a
fronterizo
. … Urrea’s voice soars with polished ease from cynical to lyrical. …
The Devil’s Highway
will haunt you.”

OTHER BOOKS BY LUIS ALBERTO URREA

Across the Wire: Life and Hard Times on the Mexican Border

By the Lake of Sleeping Children: The Secret Life of the Mexican Border

In Search of Snow

The Fever of Being