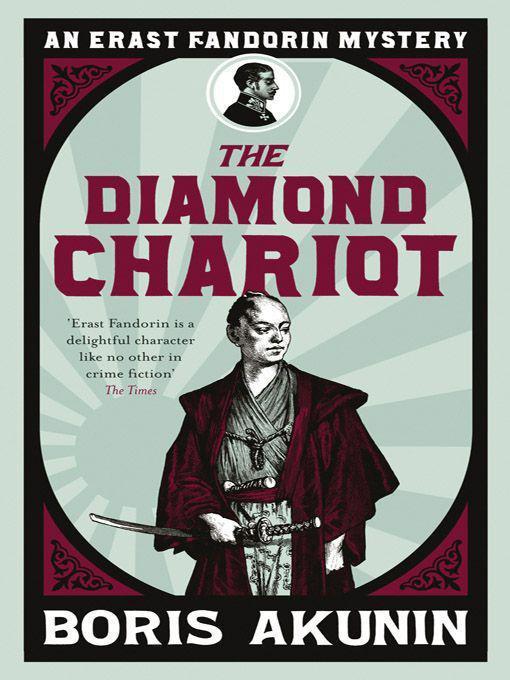 The first of the interlinked plotlines is set in Russia during the Russo-Japanese War in 1905. Fandorin is charged with protecting the Trans-Siberian Railway from Japanese sabotage in a pacy adventure filled with double agents and ticking bombs.Then we travel back to the Japan of the late 1870s. This is the story of Fandorin's arrival and life in Yokohama, his first meeting with Masa and the martial arts education that came in so handy later. He investigates the death of a Russian ship-captain, fights for a woman, exposes double-agents in the Japanese police, fights against, and then with the ninjas, and becomes embroiled in a shocking finale that interweaves the two stories and ties up the series as a whole.

The first syllable, which has a certain connection with the East

The second syllable, in which two earthly vales terminate abruptly

The third syllable, in which Vasilii Alexandrovich visits the WC

The fourth syllable, in which a hired gun sets out on the hunt

The fifth syllable, which features an interesting passenger

The first syllable, in which Vasilii Alexandrovich takes leave

The second syllable, in which Masa violates his neutrality

The third syllable, in which Rybnikov gets into a jam

The fourth syllable, in which Fandorin feels afraid

The sixth syllable, in which a tail and ears play an important part

The seventh syllable, in which it emerges that not all Russians love Pushkin

The first syllable, in which iron stars rain down from the sky

The second syllable, entirely about railways

The third syllable, in which Rybnikov gives free rein to his passion

The fourth syllable, in which the name of the Japanese God is taken in vain

The final syllable, the longest one of all

The blue die loves the
gaijin

The flag of a great power

A cobbled street running down a hill

Sparks of light on a
katana
blade

The first ray of sunlight

Snow at the New Year

A white horse in a lather

A tiger on the loose

The scent of irises

A spray of acacia

A little piece of happiness

The scales fall from his eyes

A word once given must be kept

Off with his head

The photograph of his wife

The death of an enemy

The love of two moles

The nocturnal melding of the world

Book 2: Between the Lines

The first syllable, which has a certain connection with the East

On the very day when the appalling rout and destruction of the Russian fleet near the island of Tsushima was approaching its end and the first vague and alarming rumours of this bloody Japanese triumph were sweeping across Europe – on that very day, Staff Captain Vasilii Alexandrovich Rybnikov, who lived on a small street with no name in the St Petersburg district of Peski, received the following telegram from Irkutsk: ‘Dispatch sheets immediately watch over patient pay expenses’.

Thereupon Staff Captain Rybnikov informed the landlady of his apartment that business would take him to St Petersburg for a day or two and she should not, therefore, be alarmed by his absence. Then he dressed, left the house and never went back there again.

Initially Vasilii Alexandrovich’s day proceeded entirely as usual – that is, in a bustle of ceaseless activity. After first riding to the centre of the city in a horse cab, he continued his peregrinations exclusively on foot and, despite his limp (the staff captain dragged one foot quite noticeably), he managed to visit an incredible number of places.

He started with the Major General Commandant’s Office, where he sought out a clerk from the transport accounts section and returned with a solemn air one rouble, borrowed from the clerk two days previously. Then he called into the Cossack Forces Directorate on Simeonovskaya Square, to enquire about a petition he had submitted two months ago, which had got bogged down in red tape. From there he moved on to the Military Department of Railways – he had been trying for a long time to obtain a position as an archivist in the drafting office there. On that day his small, fidgety figure was also seen in the Office of the Inspector General of Artillery on Zakharievskaya Street, and the Office of Repairs on Morskaya Street, and even at the Committee for the Wounded on Kirochnaya Street (Rybnikov had been attempting without any success to obtain an official note concerning a concussion suffered at Luoyang).

The agile army man managed to show his face everywhere. Clerks in offices nodded offhandedly to their old acquaintance and quickly turned away, immersing themselves, with an emphatically preoccupied air, in their documents and conversations about work. They knew from experience that once the staff captain latched on to someone, he could worry the life out of them.

Vasilii Alexandrovich turned his short-cropped head this way and that for a while, sniffing with his plum-shaped nose as he selected his victim. Having chosen, he seated himself unceremoniously right there on the victim’s desk and started swaying one foot in a shabby boot, waving his arms around and spouting all sorts of drivel: about the imminent victory over the Japanese macaques, his own heroic war exploits, the high cost of living in the capital. They couldn’t just tell him to go to hell – after all, he was an officer, and he’d been wounded at Mukden. They poured Rybnikov tea, regaled him with
papiroses
, answered his gormless questions and dispatched him with all possible haste to some other section, where the whole business was repeated all over again.

Between two and three o’clock in the afternoon, the staff captain, who had called into the office of the St Petersburg Arsenal on a procurement matter, suddenly glanced at his wristwatch with the mirror-bright glass (everyone had heard the story of this chronometer at least a thousand times – it had supposedly been presented to him by a captured Japanese marquis) and became terribly agitated. Blinking his yellowish-brown eyes at the two shipping clerks, who by now were completely exhausted by his gabbling, he told them:

‘Well, that was a great chat. I’m sorry, but I have to leave you now.
Entre nous
, an assignation with a lovely lady. The fever-heat of passion and all that. As the Jappos say, strike while the iron’s hot.’

He gave a brief snort of laughter and took his leave.

‘What a character,’ said the first shipping clerk, a young warrant officer. ‘But even he’s managed to find himself some woman or other.’

‘He’s lying, just talking big,’ the second clerk said reassuringly – he held the same rank, but was much older. ‘Who could ever be seduced by an old Marlborough like that?’

The worldly-wise shipping clerk was right. In the apartment on Nadezhdinskaya Square, to which Rybnikov made his way via a long, roundabout route through connecting courtyards, the staff captain was not met by a lovely lady, but a young man in a speckled jacket.

‘What on earth took you so long?’ the young man exclaimed nervously when he opened the door at the prearranged knock (twice, then three times, then a pause and twice again). ‘You’re Rybnikov, right? I’ve been waiting forty minutes for you!’

‘I had to weave around a bit. Thought I saw something …’ replied Vasilii Alexandrovich, sauntering round the tiny apartment and even looking into the toilet and outside the back door. ‘Did you bring it? Let me have it.’

‘Here, from Paris. You know, I was ordered not to come straight to Petersburg, but go via Moscow, so that …’

‘I know,’ the staff captain interrupted before he could finish, taking the two envelopes – one quite thick, the other very slim.

‘Crossing the border was really easy, incredibly easy, in fact. They didn’t even glance at my suitcase, never mind tap it for secret compartments. But the reception I got in Moscow was strange. That Thrush person wasn’t exactly polite,’ declared the speckled young man, who obviously wanted very much to have a chat. ‘After all, I am risking my own head, and I have a right to expect …’

‘Goodbye,’ Vasilii Alexandrovich interrupted him again after examining both envelopes and even feeling along their seams with his fingers. ‘Don’t leave straight after me. Stay here for at least an hour, then you can go.’

Stepping out of the entrance, the staff captain turned his head left and right, lit up a
papirosa
and set off along the street with his usual gait – jerky, yet surprisingly brisk. An electric tram went rattling past. Rybnikov suddenly stepped off the pavement into the road, broke into a run and leapt nimbly up on to the platform.

‘Now then, sir,’ the conductor said with a reproachful shake of his head. ‘Only the young shavers do that sort of thing. What if you’d come a cropper there? With that gammy leg of yours.’

‘Never mind,’ Rybnikov replied brightly. ‘What’s that the Russian soldiers say? A chestful of medals or your head in the bushes. And if I get killed, that’s all right. I’m an orphan, there’s no one to cry over me … No thanks, friend, I just hopped on for a minute,’ he continued, waving aside the ticket, and a minute later he jumped down on to the road in the same boyish fashion.

He dodged a horse cab, darted in front of the radiator of an automobile that started bellowing hysterically with its horn, and limped nimbly into a side street.

It was completely deserted there – no carriages, no pedestrians. The staff captain opened both envelopes. He glanced briefly into the thick one, saw the respectful form of address and regular rows of neatly inscribed hieroglyphs and put off reading it all until later – he slipped it into his pocket. But the second letter, written in a hasty cursive hand, engrossed Rybnikov’s attention completely.

ATasteofRome by Lucy Felthouse
More Than Words Can Say by Robert Barclay
The Best American Essays 2016 by Jonathan Franzen
The Black Echo by Michael Connelly
Power in the Hands of One by Ian Lewis
In the Arms of the Heiress (A LADIES UNLACED NOVEL) by Maggie Robinson
Doctor's Assistant by Celine Conway
Blackout by Wells, Robison
Close to the Broken Hearted by Michael Hiebert
Lady Parts by Andrea Martin