The Girl With Glass Feet 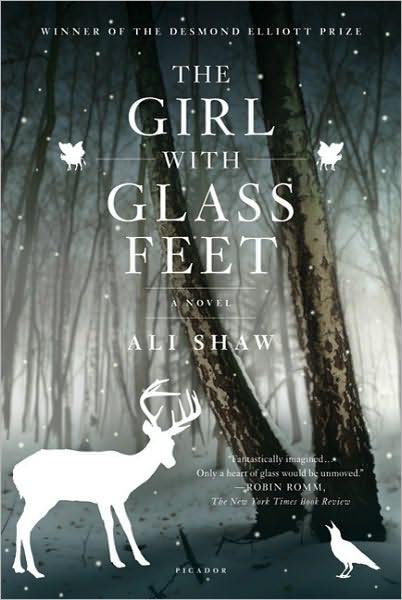 The cold northern islands of St. Hauda's Land are home to strange creatures and intertwining human secrets in Shaw's earnest, magic-tinged debut. Ida Maclaird returns to the archipelago to find a cure for the condition her last visit brought her—she is slowly turning into glass. The landscape is at once beautiful and ominous, and its residents mistrustful, but she grows close to Midas Crook, a young man who, despite his intention to spend his life alone, falls in love with Ida and becomes desperate to save her. Their quest leads them to Henry Fuwa, a hermit biologist devoted to preserving the moth-winged bull, a species of insect-sized winged bovines; to Carl Mausen, a friend of Ida's family whose devotion to her mother makes him both ally and enemy; and finally to Emiliana Stallows, who claims to have once cured a girl with Ida's affliction. Each of these characters' histories intertwine, though their motivations surrounding Ida are muddled by their loyalties. Both love story and dirge, Shaw's novel flows gracefully and is wonderfully dreamlike, with the danger of the islands matched by the characters' dark pasts.
(Jan.)
Copyright © Reed Business Information, a division of Reed Elsevier Inc. All rights reserved.

"Fantastically imagined.... The hybrid form of the book—fairy tale, myth, psychological realism and fantasy—impresses. But Shaw’s most delightful offerings are the vivid details he provides to make the magical real.... As Ida turns to glass, Midas must continue his own transformation, from hardened to human. The end of the book, saturated with color and emotion, is risky and brave like the message it imparts. Only a heart of glass would be unmoved."—Robin Romm,
New York
Times Book Review

"Ali Shaw has created a memorable addition to [the] fabulist pantheon in his gorgeous first novel,
The Girl with Glass Feet
.... Over the course of this eerie, bewitching novel, the mixture of love and grief and the imminence of death become as memorable as Ida’s mysterious, dreadful transformation and Midas’s more achingly human one ... Shaw acknowledges the influence of writers like Andersen, Kafka and Borges (Shaw's menagerie of perfectly detailed, marvelous creatures could have stepped from the pages of "The Book of Imaginary Beings"). But it’s Andersen’s melancholy tales, steeped in loss and a brooding sense of fatedness, that shimmer around the edges of
The Girl with Glass Feet
. Every character in this novel yearns for a love that seems just out of reach: Midas's unhappy parents; Henry Fuwa; Carl Maulsen, who loved Ida's mother; Emiliana, the island woman who might have a cure for Ida's illness; Ida herself—all of them are bound by threads of betrayal and desire and hope, until Fate cuts those threads, calmly and without remorse."—Elizabeth Hand,
Washington
Post

"
The Girl with Glass Feet
is a love story, not just about two people falling in love, but also about love itself: its power, its limits, and its consequences.... Although Shaw’s novel is set in the present, everything’s turned askew, resulting in a world that is at once banal—the car won’t start; the coffee’s getting cold—and fantastical—glass feet; glass hearts. Shaw makes the crucial decision to leave the human emotions and relationships in the realm of the believable, while embedding them in terrain that is ever so slightly surreal. Somehow it’s never implausible. Shaw is at his best when describing the fantastical world he’s created. His language manages to be poetic and economical.... The look, the sound, and the scent of St. Hauda’s Land stay with you after turning the last page of this beautiful novel."—Buzzy Jackson,
The Boston Globe

"Ali Shaw’s engrossing and moving debut novel ... is a story of a strange land and its strange inhabitants, but at heart it’s a sincere but unsentimental love story.... The joy that Ida and Midas share, after Midas takes those first risky steps toward love, is so beautifully captured that their happiness beats back the drear and shadows.... The dreamy atmosphere curls around you until you see, hear and smell the moors and bogs.... The ending bridges the gap between fairy tales old and new."—Lisa McLendon,
Wichita
Eagle

"Ali Shaw shows immense promise with his deft use of language, which sings in a book that is at its heart filled with sadness. The soft light on the island plays coyly with the thick vegetation, casting glorious shadows and producing a riot of images all ably captured by Midas’ camera and Shaw’s prose."—Vikram Johri,
The Chicago Sun-Times

"Ali Shaw has a gift for storytelling and an obvious love of language. His descriptions are poetic and original....
The Girl With Glass Feet
is a work of great imagination and talent. Mr. Shaw never tells us what causes the glassification, but that leaves the reader open to decide whether the tale is merely a modern fairy tale, or whether turning into glass is in itself a metaphor for a larger, human condition that creates change bringing moments of pain and pleasure."—Corinna Lothar,
The Washington Times

"The cold northern islands of St. Hauda’s Land are home to strange creatures and intertwining human secrets in Shaw’s earnest, magic-tinged debut.... Both love story and dirge, Shaw’s novel flows gracefully and is wonderfully dreamlike, with the danger of the islands matched by the characters’ dark pasts."—
Publishers Weekly

"Ali Shaw offers the rare delight of a world freshly and richly imagined.... The story is soothingly spellbinding, pulling the reader with steady delicacy into the hearts and minds of its characters amid the enthralling murmur of the fantastical."—Ariel Berg,
The San Francisco Book Review

“On the surface, the book is magical, seemingly as transparent as Ida's toes. Like all the best fairy tales, though, it's tinted with a pervading sense of unease that sticks with the reader long after the cover is closed. Midas's love for a woman who is leaving the real world he despises, Ida's lost grip on humanity, the very land on which they meet, are all deeper and darker than they seem, making this a book well worth reading.”—BookSlut.com

"This lovely fable is a chain of linked mysteries with accelerating suspense that propels the reader deep into Shaw’s world of marvels. That world is crafted with elegance and swept by passionate magic and the yearning for connection. A rare pleasure."—Katherine Dunn, author of
Geek Love

"Written in the tradition of magical realists like Haruki Murakami and Gabriel Garcia Marquez,
The Girl with Glass Feet
is a singular, slippery narrative that defies easy categorization. Shaw writes finely honed prose and knows how to wring maximum suspense out of a tightly woven plot. His is an accomplished first novel—a hypnotic book with an atmosphere all its own."—Julie Hale,
Bookpage

"Emotional entanglements on a faraway frozen island are shaped by romance and tragedy in a melancholic yet whimsical British debut.... [A] strikingly visual novel.... captivatingly ethereal."—
Kirkus Reviews

"Shaw has worked the great tradition of European fairy tales and come up with an ingenious story ... A magical fable of fate and resignation."—
The Guardian
(UK)

"
The Girl with Glass Feet
is not just special—it’s remarkable.... [This] debut novel conjures up the extraordinary and fantastic, yet places it firmly in our digital world.... It’s a very visual novel—readers who enjoy using their imagination will adore it."—Helen Peacock,
The Oxford Times
(UK)

"A haunting and magical tale.... One of the most original and memorable love stories I’ve read in a long time.... It takes a real talent to create such an imaginative setting yet still make readers believe and care about the characters, but first-time novelist Ali Shaw pulls it off in dazzling style, spinning an unforgettable story so vividly described that the reader is only too willing to suspend disbelief in order to be transported into his sad and lovely world."—Morag Lindsay,
Aberdeen
Press and Journal

The girl with glass feet

Ali Shaw was born in 1982 and grew up in a small town in Dorset. He studied English at Lancaster University and has since worked as a bookseller and at Oxford’s Bodleian Library. He is currently writing his second novel.

First published in hardback in Great Britain in 2009 by Atlantic Books,an imprint of Grove Atlantic Ltd.

This paperback edition published in Great Britain in 2010 by Atlantic Books.

The moral right of Ali Shaw to be identified as the author of this work has been asserted by him in accordance with the Copyright, Designs and Patents Act of 1988.

All rights reserved. No part of this publication may be reproduced, stored in a retrieval system or transmitted in any form or by any means, electronic, mechanical, photocopying, recording or otherwise, without the prior permission of both the copyright owner and the above publisher of this book.

This novel is entirely a work of fiction. The names, characters and incidents portrayed in it are the work of the author’s imagination and not to be construed as real. Any resemblance to actual persons, living or dead, events or localities, is entirely coincidental.

An imprint of Grove Atlantic Ltd

The girl with glass feet

That winter there were reports in the newspaper of an iceberg the shape of a galleon floating in creaking majesty past St Hauda’s Land’s cliffs, of a snuffling hog leading lost hill-walkers out of the crags beneath Lomdendol Tor, of a dumbfounded ornithologist counting five albino crows in a flock of two hundred. But Midas Crook did not read the newspaper, he only looked at the photographs.

That winter Midas had seen photos everywhere. They haunted the woods and lurked at the ends of deserted streets. They were of such multitude that while lining up a shot at one, a second would cross his aim and, tracking that, he’d catch a third in his sights.

One day in mid-December he chased the photos to a part of the woods near Ettinsford. It was a darkening afternoon whose final shafts of light passed between trees, swung across the earth like searchlights. He left the path to follow such a beam. Twigs crunched beneath his shoes. A bleating bird skipped away over leaves. Branches swayed and clacked against each other overhead, snipping through the roving beam. He kept up his close pursuit, treading through its trail of shadows.