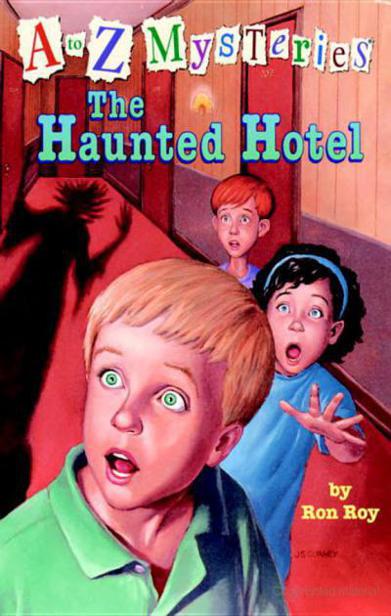 “I know one thing,” Dink said. “No ghost is shutting down the Shangri-la if I have anything to do with it!”

“Dink is right,” Ruth Rose said. “Mr. Linkletter is our friend. We have to think of something!”

Suddenly the elevator door opened. A figure in white stood staring out at them.

The A to Z MysTeries™ series!

This one is for Richard.
—R.R.

Donald David Duncan, Dink to his friends, was reading the Sunday newspaper on his living room floor.

Josh was sprawled on the sofa. He was using raisins to teach Dink’s guinea pig, Loretta, to do math.

Loretta gobbled up one of the raisins.

“Loretta!” Josh scolded. “If you keep eating all the raisins, you’ll never learn to add!”

Ruth Rose was doing the crossword puzzle. “Maybe she’s trying to teach you to
subtract
, Joshua,” she said.

Josh tossed a raisin at her.

“I’m serious, you guys!” Dink said. He poked his finger at the
Green Lawn Gazette’s
front page. “C’mere and read this!”

Josh put Loretta in her cage, then read the headline over Dink’s shoulder.

Josh grinned. “You don’t really believe that stuff, do you?” he asked.
“I’ll bet it’s a Halloween joke or something.”

Josh snorted. “Well, I don’t believe in ghosts,” he said. “Not until I see one with my own eyes!”

“Listen to this,” Dink said, reading from the paper. “‘Guests report seeing a ghost floating down the hall at midnight. It was carrying a silver sword!’”

Ruth Rose reached for her jacket. “Why don’t we go to the hotel and see for ourselves?”

Josh let out a big sigh. “Okay, but
I’m only coming to prove that I’m right.”

The kids left Dink’s house and headed around Silver Circle.

A bunch of kids were playing soccer at the elementary school. Their noses were pink and Dink could see their breath. The trees surrounding the playing field had turned red and gold.

The kids stopped across the street from the Shangri-la Hotel.

People lugging suitcases were streaming out of the hotel. One woman was still wearing her slippers! They were pink and fluffy, with floppy bunny ears.

A newspaper reporter was trying to interview people as they left the hotel.

“Hello, sir,” she said to one man. “I’m Linda Gomez from the
Green Lawn Gazette
. What’s your reaction to the hotel ghost?”

“Let’s get her to interview
us,”
Josh whispered. “Maybe we’ll get our names in the paper!”

“We don’t know anything yet,” Dink said. “Come on, let’s find Mr. Linkletter.”

The kids crossed the street and squeezed through the crowded doorway. Inside, Mr. Linkletter was standing behind the front desk, listening to a man and woman.

“…and we demand our money back!” the woman was saying. “We came here to see autumn leaves, not to be frightened by ghosts!”

Mr. Linkletter sighed. Dink noticed that his hair was mussed and his eyes were red.

“Of course, Mrs. Caruthers,” he said. “You’ll get a refund for the entire week. I’m sorry for this trouble. We’ve never had ghosts at the Shangri-la!”

Dragging their suitcases, the couple hurried past the kids and shoved through the doors.

Just then the phone rang. Mr. Linkletter turned to answer it.

“Wait, there’s Livvy,” Ruth Rose said. “I wonder if she knows anything.”

Livvy Nugent was vacuuming the carpet near the elevators. She wore a white uniform with a dark blue apron.

Livvy smiled and switched off the vacuum. “Ruth Rose! The last time I saw you, there was a kidnapping at the hotel. Now we’ve got a ghost!”

“We read about it in the newspaper,” Ruth Rose said. “Is it true?”

“The guests sure think so!” Livvy said. “This place has been a madhouse since Friday night. Our biggest week of the year, and the guests are running out the door!”

Josh smirked. “Does the ghost jump out and say ‘boo’?” he asked.

Ruth Rose shrugged. “I don’t know, but
something’s
scaring the people away.”

“Did you see the ghost?” Dink asked.

Livvy shook her head. “No, and I’d
better not. When ghosts show up, I’m out of here!”

Just then Mr. Linkletter hung up the phone and walked over. “Ms. Nugent, please continue with your work,” he said to Livvy.

Then he turned to the kids. “What can I do for you, children?”

“We read about the ghost,” Dink said.

“And we saw all the people leaving,” Ruth Rose said.

Mr. Linkletter’s sad eyes surveyed the lobby. All the guests had left, and the place was empty.

Mr. Linkletter sighed. “Apparently a ghost is scaring away our guests,” he said.

I Use To Love You: A Hood Chick's Revenge by Wanzo, Shaun
Let's Sell These People a Piece of Blue Sky: Hubbard, Dianetics and Scientology by Jon Atack
Más respeto, que soy tu madre by Hernán Casciari
Winning is Everything by David Marlow
More Adventures Of The Great Brain by Fitzgerald, John D.
Breath of Life by Sara Marion
Death by Jealousy by Jaden Skye
Death, the Devil, and the Goldfish by Buckley, Andrew
Exposure by Evelyn Anthony
Diary of a Male Maid by Foor, Jennifer