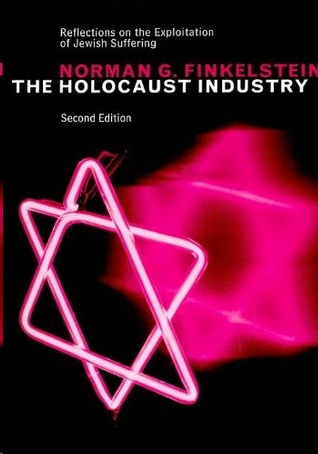 Colin Robinson of Verso conceived the idea of this book. Roane Carey molded

my reflections into a coherent narrative. At every stage in the book's production

personal support and encouragement. I am indebted to all of them. In these

pages I attempt to represent my parents' legacy. Accordingly, the book is

dedicated to my two siblings, Richard and Henry, and my nephew, David.

This book is both an anatomy and an indictment of the Holocaust industry. In

the pages that follow, I will argue that "The Holocaust" is an ideological

representation of the Nazi holocaust.
1
Like most ideologies, it bears a

connection, if tenuous, with reality. The Holocaust is not an arbitrary but rather

and class interests. Indeed, The Holocaust has proven to be an indispensable

ideological weapon. Through its deployment, one of the world's most

itself as a "victim" state, and the most successful ethnic group in the United

this specious victimhood — in particular, immunity to criticism, however

justified. Those enjoying this immunity, I might add, have not escaped the

moral corruptions that typically attend it. From this perspective, Elie Wiesel's

performance as official interpreter of The Holocaust is not happenstance.

commitments or literary talents.
2
Rather, Wiesel plays this leading role because

he unerringly articulates the dogmas of, and accordingly sustains the interests

The initial stimulus for this book was Peter Novick's seminal study,
The

Holocaust in American Lfe,
which I reviewed for a British literary journal.
3
In

these pages the critical dialogue I entered in with Novick is broadened; hence,

the extensive number of references to his study. More a congeries of

provocative aper,cus than a sustained critique,
The Holocaust in American Life

belongs to the venerable American tradition of muckraking. Yet like most

muckrakers, Novick focuses only on the most egregious abuses. Scathing and

refreshing as it often is,
The Holocaust in American Lfe is
not a radical critique.

Root assumptions go unchallenged. Neither banal nor heretical, the book is

pitched to the controversial extreme of the mainstream spectrum. Predictably, it

received many, though mixed, notices in the American media.

Novick's central analytical category is "memory." Currently all the rage in the

ivory tower, "memory" is surely the most impoverished concept to come down

the academic pike in a long time. With the obligatory nod to Maurice

"Holocaust memory." Once upon a bme, dissenting intellectuals deployed

robust political categories such as "power" and "interests," on the one hand, and

"ideology," on the other. Today, all that remains is the bland, depoliticized

language of «concerns» and "memory." Yet given the evidence Novick

adduces, Holocaust memory
is
an ideological construct of vested interests.

Although chosen, Holocaust memory, according to Novick, is "more often than

not» arbitrary. The choice, he argues, is made not from «calculation of

advantages and disadvantages» but rather "without much thought for . . .

consequences."
4
The evidence suggests the opposite conclusion.

My original interest in the Nazi holocaust was personal. Both my father and

mother were survivors of the Warsaw Ghetto and the Nazi concentration

camps. Apart from my parents, every family member on both sides was

exterminated by the Nazis. My earliest memory, so to speak, of the Nazi

Adolf Eichmann (1961) when I came home from school. Although they had

been liberated from the camps only sixteen years before the trial, an

unbridgeable abyss always separated, in my mind, the parents I knew from
that.

Photographs of my mother's family hung on the living-room wall. (None from

my father's family survived the war.) I could never quite make sense of my

connection with them, let alone conceive what happened. They were my

mother's sisters, brother and parents, not my aunts, uncle or grandparents. I

remember reading as a child John Hersey's
The Wall
and Leon Uris's
Mila 18,

both fictionalized accounts of the Warsaw Ghetto. (I still recall my mother

complaining that, engrossed in
The Wall,
she missed her subway stop on the

way to work.) Try as I did, I couldn't even for a moment make the imaginative

leap that would join my parents, in all their ordinariness, with that past.

The more important point, however, is this. Apart from this phantom presence,

I do not remember the Nazi holocaust ever intruding on my childhood. The

the events of the day. Yet I honestly do not recall a single friend (or parent of a

friend) asking a single question about what my mother and father endured. This

was not a respectful silence. It was simply indifference. In this light, one cannot

but be skeptical of the outpourings of anguish in later decades, after the

I sometimes think that American Jewry "discovering" the Nazi holocaust was

worse than its having been forgotten. True, my parents brooded in private; the

suffering they endured was not publicly validated. But wasn't that better than

the current crass exploitation of Jewish martyrdom? Before the Nazi holocaust

became The Holocaust, only a few scholarly studies such as Raul Hilberg's
The

Search for Meaning
and Ella Lingens-Reiner's
Prisoners of Fear
were

published on the subject.
5
But this small collection of gems is better than the

shelves upon shelves of shlock that now line libraries and bookstores.

Both my parents, although daily reliving that past until the day each died, lost

interest by the end of their lives in The Holocaust as a public spectacle. One of

my father's lifelong friends was a former inmate with him in
Auschwitz
, a

compensation after the war. Eventually he became a director of the Israeli

disappointment, my father finally admitted that even this man had been

corrupted by the Holocaust industry, tailoring his beliefs for power and profit.

As the rendering of The Holocaust assumed ever more absurd forms, my

The tales of "Holocaust survivors"—all concentration camp inmates, all heroes

of the resistance — were a special source of wry amusement in my home. Long

and exploitation of the Nazi genocide. The most obvious answer is that it has

these policies. There is a personal motive as well. I do care about the memory

of my family's persecution. The current campaign of the Holocaust industry to

shrunk the moral stature of their martyrdom to that of a Monte Carlo casino.

Even apart from these concerns, however, I remain convinced that it is

important to preserve — to fight for — the integrity of the historical record. In

of us. Yet I think that to do so, to truly
learn
from the Nazi holocaust, its

many public and private resources have been invested in memorializing the

Nazi genocide. Most of the output is worthless, a tribute not to Jewish suffering

but to Jewish aggrandizement. The time is long past to open our hearts to the

rest of humanity's sufferings. This was the main lesson my mother imparted. I

never once heard her say: Do not compare. My mother
always
compared. No

doubt historical distinctions must be made. But to make out
moral
distinctions

between "our" suffering and "theirs" is itself a moral travesty. "You can't

one is happier than the other." In the face of the sufferings of

was: We are all holocaust victims.

1
In this text,
Nazi holocaust
signals the actual historical event,
The Holocaust

2
For Wiesel's shameful record of apologetics on behalf of Israel, see Norman

G. Einkelstein and Ruth Bettina Birn,
A Nation on Trial: The Goldhagen Thesis