Read The Lords of Discipline Online

The Lords of Discipline 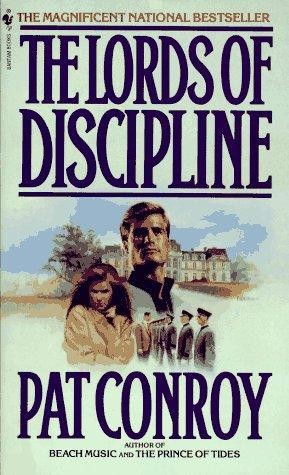 The Lords of Discipline

This book is dedicated with love and gratitude to Lt. Col. Thomas Nugent Courvoisie, U.S.A. (ret.), the finest military officer I have ever known. And to Joseph Michael Devito and Robert D. Marks, friends and brothers.

And to James T. Roe III and John C. Warley. And to my friends, teachers, classmates, and teammates at The Citadel from 1963 to 1967. And to the boys who did not make it.

Special thanks to these five remarkable people from Houghton Mifflin: Norman Berg, Shannon Ravenel Purves, Jonathan and Susan Galassi, and to Anne Barrett, whose retirement was a great loss to publishing and to the writers who loved her.

W
ith heart at rest I climbed the citadel’s
steep height, and saw the city as from a tower,
hospital, brothel, prison, and such hells,
where evil comes up softly like a flower.

A Biography of Pat Conroy

This book is a work of fiction. No character is real, and no incident occurred as described in this book; no man or woman who lives within the pages of this book lives outside of it. This novel is about the idea of the military school and the various forms it has taken around the country. I interviewed men from West Point, Annapolis, the Air Force Academy, VMI, The Citadel, and dozens of military high schools around the South in preparation for writing the novel. There is a sameness to all these schools; yet each is unique and has its own fiercely protected identity. It is the military school as it has evolved in America, as well as the lives of the men and women it has touched and changed, that I am writing about, and no one school or set of individuals in particular. Similarly, the actions I portray here are fictional archetypes created from my own experience and research, not actual events.

I
wear the ring.

I wear the ring and I return often to the city of Charleston, South Carolina, to study the history of my becoming a man. My approach to Charleston is always silent and distracted, but I come under full sail, with hissing silk and memories a wing above me in the shapes of the birds I love best: old brown pelicans, Great Blue herons, cowbirds, falcons lost at sea, ospreys lean from dives, and eagles over schools of mullet. I am a lowcountry boy. My entrance to this marsh-haunted city is always filled with troubled meditations on both my education and my solitude during a four-year residence at the Institute.

The city of Charleston, in the green feathery modesty of its palms, in the certitude of its style, in the economy and stringency of its lines, and the serenity of its mansions South of Broad Street, is a feast for the human eye. But to me, Charleston is a dark city, a melancholy city, whose severe covenants and secrets are as powerful and beguiling as its elegance, whose demons dance their alley dances and compose their malign hymns to the side of the moon I cannot see. I studied those demons closely once, and they helped kill off the boy in me.

I am not a son of Charleston. Nor could I be if I wanted to. I am always a visitor, and my allegiance lies with other visitors, sons and daughters of accident and circumstance. Edgar Allan Poe was a son by visitation. It was no surprise to me when I was a freshman at the Institute to discover that Poe was once stationed at Fort Moultrie and that he wrote “The Gold Bug” about one of the sea islands near Charleston. I like to think of him walking the streets of Charleston as I walked them, and it pleases me to think that the city watched him, felt the shimmer of his madness and genius in his slouching promenades along Meeting Street. I like to think of the city shaping this agitated, misplaced soldier, keening his passion for shade, trimming the soft edges of his nightmare, harshening his poisons and his metaphors, deepening his intimacy with the sunless wastes that issued forth from his kingdom of nightmare in blazing islands, still inchoate and unformed, of the English language. Whenever I go back to Charleston, I think of Poe. I remember that Poe spent a single year attending West Point before dropping out in disgrace and beginning his life among words. I wonder how that year in the barracks marked him; I wonder if our markings were similar.

Osceola was another visitor to Charleston. The Seminole chieftain, betrayed by white flags and white man’s honor and brought to prison in Fort Moultrie, died there after a month’s internment, dreaming of tannic-stained creeks flowing through mangrove, flowing north from Florida, through the salt-rusted bars, bringing the heat of council fires, the cries of betrayed warriors, and the shiver of a man returning to the serenity of cypress and safety of otters. Osceola’s bones rested in a grave on Sullivan’s Island until they were stolen in the spring of my sophomore year. I remember hoping that the thief was a full-blooded Seminole who knew where the greatest of his tribe should be put to rest. Shortly after the theft of Osceola’s remains, I found myself in H. R. Rabun’s bar on King Street, surrounded by a group of cadets from R Company, toasting the escape of the chief. In the midst of this, I indulged myself with a vision. I saw myself cutting through the bars of Osceola’s cell, and together we made it back to the swamps, the Indian teaching me the ways of the forest as we traveled southward, giddy with the star-blaze of freedom. My God, it was a beautiful thing to see the Everglades through the eyes of Osceola. But in this vision I had one regret: I would have liked first to have shown him Charleston through my eyes, through the eyes of Will McLean. I, too, had my Charleston cell, and I, too, would have some bones to show him.

Though I will always be a visitor to Charleston, I will always remain one with a passionate belief that it is the most beautiful city in America and that to walk the old section of the city at night is to step into the bloodstream of a history extravagantly lived by a people born to a fierce and unshakable advocacy of their past. To walk in the spire-proud shade of Church Street is to experience the chronicle of a mythology that is particular to this city and this city alone, a trinitarian mythology with equal parts of the sublime, the mysterious, and the grotesque. But there is nothing to warn you of Charleston’s refined cruelty. That knowledge must be earned. No gargoyles hang from the sides of St. Philip’s or St. Michael’s. No messages are in the iron scrollwork of its gates to warn visitors like Poe, Osceola, me, and you.

The city of Charleston burns like a flame of purest memory. It is a city distorted by its own self-worship. I do not believe there is another city like it on earth, nor do I believe there is another college like the Institute. Nor can I imagine the Institute in any other city. The school has adopted many of the odd, quirky mannerisms of Charleston itself, an osmotic, subterranean effect, and each has shaped the other, magnified the other’s flaws, reinforced the other’s strengths. If the Institute existed in San Francisco, Chicago, Dallas, or Phoenix, it would be a vastly different school, and I would be a vastly different man. The city, river-girt, has a tyrannical need for order and symmetry. It is not a city of outlaws, not a landscape for renegades. There is no ambiance of hazard here, but something so tightly repressed, so rigidly ordered, so consecrated to the adoration of restraint that you sometimes want to scream out for excess, for a single knee bent toward bad taste, for the cleansing roar of pandemonium to establish a foothold somewhere in the city. But, of course, the charm of the city lies in this adherence to a severity of form. Entering Charleston is like walking through the brilliant carbon forest of a diamond with the light dazzling you in a thousand ways, an assault of light and shadow caused by light. The sun and the city have struck up an irreversible alliance. The city turns inward upon itself, faces away from visitors, alluringly contained in its own mystery. The city has a smell, a fecund musk of aristocracy, with the wine and the history of the lowcountry aging beneath the verandahs, the sweetly decadent odors of lost causes. Around you, in late August, beauty is reduced at last to beauty at the confluence of two rivers. But I know what the late August smell of the city is; I know it well. It is the awful fear of boys entering the Institute to begin their plebe year. That is what I smell when I cross the Ashley River on my return to Charleston.

I
define myself in this way: I am the son of Thomas Patrick McLean of Savannah, Georgia, a volatile, brawling man who attended Benedictine High School and Carolina Military Institute, and as a Marine captain won a Navy Cross for his valor under fire during the invasion of Iwo Jima. He returned to Savannah as a wounded hero in 1944, went to work for Belk’s department store, and married a girl from Dahlonega, Georgia, who worked in the perfume department after a brief stint in notions. I liked neither the Corps nor Belk’s nor my father, but grew up worshiping the black-haired woman from the perfume department. My mother blamed my father’s temper on Iwo Jima, but I entertained the heretical thought that he was a son of a bitch long before the Japanese invaded Pearl Harbor. When he was dying of cancer, he made me promise to attend and graduate from Carolina Military Institute, and through tears, I promised. He told me to stop crying and act like a man and I did. Then he made me promise I would be a pilot when I entered the service, that he didn’t want any son of his getting killed on some godforsaken beach like Iwo Jima, especially a son he loved as much as he did me. Eight hours after he told me he loved me for the first time, he died of melanoma and left me a prisoner of his memory. At age fourteen, I was the man of the house.