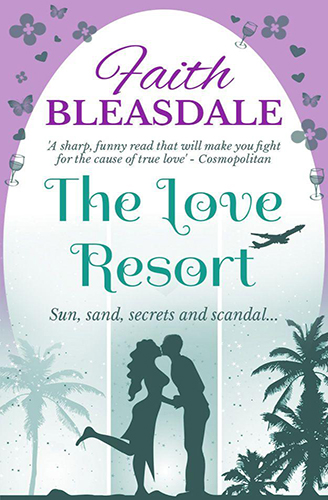 The right of Faith Bleasdale to be identified as the author of this work has been asserted by her in accordance with the Copyright, Designs and Patents Act, 1988.

First published in the United Kingdom in 2005 by Hodder and Stoughton.

This edition published in 2014 by Endeavour Press Ltd.

In memory of my father who knew everything there is to know about love.

The Love Resort is an exclusive, holiday resort for couples only,* on one of the most beautiful and romantic Caribbean islands. Magical and enchanting, the resort casts its special love spell on all who visit.

Set in acres of beautiful gardens, blooming with colour, and its own private beach with dove-white sands and sapphire-blue sea, it is the ultimate retreat for you and the one you love.

A luxurious spa, two freshwater swimming pools, a fitness centre and plenty of water sports are available in our all-inclusive package. We promise there will never be a dull moment. Those who simply wish to relax are invited to enjoy a number of love seats from where you can watch the mesmerising sunsets and whisper sweet nothings to your loved one.

Two gourmet restaurants cater for every palate. The beach front offers the finest seafood in a wonderfully romantic and intimate environment. The main restaurant serves food all day, and the buffets are designed to please every appetite.

Whether you are staying in our impressive hotel or in a luxury bungalow, your knowledge of each other will be fulfilled, and the ballroom will serve you with entertainment which will fan those flames of love.

One thing is guaranteed: in The Love Resort, Love blossoms.

‘I have taken my romantic novels and brought them to life, in a place where love conquers all and romance is a way of life.’

*Note, in this instance a couple is two people of the opposite sex who are in a relationship.

‘Have you seen this?’ Anne-Marie Langdale screeched at a pitch that might break glass. Ed, her husband, having just entered the office, contemplated backing out again. Lily Bailey, her PR manager, physically recoiled. ‘Well, well? Is someone going to fucking well answer me?’ Waving a magazine frantically, she stepped menacingly from behind her desk.

Anne-Marie was a contradiction. With her glossy, long blonde hair that rivalled any in a shampoo advert, and a face that housed soft, delicate features, it was amazing that the voice belonged to her. When Ed had first heard her in full cry (some time after the wedding), he thought he’d imagined it. He soon came to realise he hadn’t. Anne-Marie looked like a heroine from one of the romantic novels she was so famous for writing, but didn’t sound like one. Her heroines never shouted, and they definitely never swore, whereas Anne-Marie had a mouth like a sewer. She was tiny—just over five foot—petite but powerful, and frightening. She was wearing a floor-length pink chiffon gown, beneath which her feet were characteristically bare. This was Anne-Marie’s uniform. A uniform that represented who she wanted to be, but not who she was.

‘What is it, darling?’ Ed asked, in a deep commanding voice, the result of thousands of pounds’ worth of elocution lessons. Ed hailed from Sussex and had possessed a fairly accentless voice, but Anne-Marie had wanted to change it to the way she imagined the heroes of her novels would speak. Now he spoke effortlessly as his wife wanted, and couldn’t remember his old voice, let alone revert to it.

‘That crappy cheap magazine. The shits. The bastards. The c***s.’ She waved the magazine again before throwing it on the floor in disgust.

‘Let me see it.’ Ed threw a glance at Lily, who was rooted to the spot behind her own desk. He picked up the magazine, then led Anne-Marie to the sofa in the corner of the office and managed to get her to sit down. He then went to Lily’s desk and opened the magazine. It was the
Traveller
, one of the UK’s most respected travel magazines. They exchanged another look, took a deep breath, and began to read.

The Love Resort is a bizarre place. Décor-wise, it looks and feels romantic, in a relatively tasteful way. Which surprised me as Anne-Marie Langdale herself is a paragon to bad taste. On the surface she has managed to capture the essence of romance and transfer it into a tangible, saleable asset. However, the people who stay at the resort often look as if they don’t belong. It’s full of couples (most of whom are past their prime), in garish colours, who spoil the illusion of the resort. I believe that Ms Langdale’s idea was to fill the place with people who resemble characters from her own romance novels, but instead, ordinary (albeit rich) couples are allowed to step into her world for two weeks at a time.

‘It compliments the resort.’ Ed could see that Lily was struggling to say something positive.

‘You fucking idiot. It says I’ve got bad taste, which is just fucking untrue. Then it says that the visitors aren’t in keeping with the theme. And they’re sodding well right about that. I wanted young, beautiful people in my resort, not hideous old people. Understand? Do you understand?’ Her eyes bulged, almost popping out of her head.

‘Anne-Marie, we do understand, honestly, darling, we do,’ Ed soothed. He sighed and looked around him. Their office was a two-roomed bungalow in the grounds of the resort, while the administration offices were in the main complex. Anne-Marie felt that her office ought to be set apart, reinforcing her position. Her husband and her PR manager worked with her, but the office was out of bounds to anyone else unless they were summoned. It was large and open plan, with three desks, a sofa, a small meeting table and a separate filing room. The walls were white; the ceilings fitted with colonial-type fans, which emitted a constant low buzz. The office was sparsely furnished, the result of various feng shui experts, expensive interior designers and Anne-Marie’s personal psychic.

‘Well then, if you understand you’ll do something about it. No wonder I can’t write. No wonder I’m suffering from writer’s block. It’s hideous, it’s all fucking hideous. You two are meant to be helping me.’ She rounded on them, her face murderous. ‘You’d better fix this and fast. I’m going to lie down.’ She picked up the skirt of her gown and swept out of the room without a backward glance.

Anne-Marie lay in her pink circular bed with a cold compress on her head. She tried to count herself calm, as her therapist had taught her, but every time she got to the number nine, she wanted to hit something. It wasn’t supposed to be like this.

Twenty years ago, she’d written her first romantic novel. It was something she’d always wanted to do, and the pleasure she got from immersing herself in romance was immeasurable. She found herself a publisher and had never looked back. In fact, now she was so far forward that the pleasure, the sheer happiness she used to feel about her work was out of her reach.

Her private line rang and she reached over and snatched up the pink handset.

‘Hello.’ Her voice was coated with treacle. Only a handful of people had this number; only the most important.

‘Anne-Marie, darling, it’s Abigail,’ Abigail Bell, Anne-Marie’s publisher and best friend announced, her voice reassuringly deep, with a husky edge that could be attributed to a twenty-year, thirty-a-day habit.

‘But you’re in the Caribbean; you’re in your gorgeous, gorgeous resort. I thought you’d always be happy there.’

‘But it’s full of ugly people. Remember when we talked about it, when I planned it? I told you that the beautiful people would fill the place and I’d be inspired.’

‘Are they really ugly?’ Abigail asked.

‘Far too ugly to go in my novels, and that’s the problem. I can’t write when I’m surrounded by such ugliness. Abigail, some of these people are...’

‘Are what, darling? Are what?’

‘Some of them, quite a lot of them, are fat.’ Anne-Mariedissolved into tears.

‘Anne-Marie, darling, you know that the book is due now.’

‘Then I shall just have to come out and help you,’ Abigail stated. ‘Now, which is the best flight, do you think?’

Anne-Marie felt better after hanging up the telephone. At least she would have her best friend by her side for support. Abigail understood her; she was the only one who did. Ed didn’t—he didn’t know the first thing about the pressure she was under, the overwhelming stress, or the expectations that she had to live up to. Oh, he ran the business efficiently and profitably, but he wasn’t in tune with her emotional needs.

Then there was Lily. As well as PR manager to the resort, Lily was supposed to be Anne-Marie’s personal publicist (for anything other than her books), and she didn’t understand her either. Anne-Marie had wanted to sack her after she’d been there for two months, but Ed said that the contract they’d given her secured her job for two years, and so she’d have to be paid in full for doing nothing. When Anne-Marie demanded to know why she’d got such a contract, he’d physically cowered as he pointed out that Anne-Marie had set her heart on Lily and ordered him to give her whatever she wanted. Lily came highly recommended; she used to work for a film star and Anne-Marie liked the glamour that this suggested. She’d been blinded by it. But she blamed Ed; he should have stopped her.

She was almost alone, she realised. But not for long. First she would come up with an idea to get the young people into her resort. The beautiful people who would inspire her once more. People who could be in her new book; a cast of characters that would cure her writer’s block. And, of course, she would have Abigail.

Anne-Marie had met Abigail Bell and her husband, Philip, after she had written her first book. They ran a dynamic young publishing company that specialised in romance. They snapped up her first book,
Only
Where
the
Sun
Shines
, for a pittance, and it was an instant hit. Since then, she had become the international queen of romantic fiction and Bell Publishing’s top money-spinner. From the beginning Anne-Marie had insisted that Abigail act as her agent as well as her publisher; she was the only woman she could trust. In return, Abigail had guided Anne-Marie throughout her entire career, proving to her that she had put her trust in the right person.

After Anne-Marie had completed her fourth book and established her popularity, Abigail had told her that it was time to push herself forward into the spotlight. She laughed as she remembered how scared she had been. At that time she wasn’t the woman she was now; not even recognisably. Anne-Marie shuddered as she remembered how she used to be. She’d worn her mousy hair short, and had sported glasses that were too big for her tiny face. Her clothes were dowdy and cheap, and her features sullen. She looked as if she should be writing horror novels, or at least tragedies, not romance. However, Anne-Marie had never cared about the way she looked. Not the way she had learnt to now.

Broken Mirrors by Elias Khoury
Lucas Ryan Versus: The Hive (The Lucas Ryan Versus Series) by Madison Daniel
A Writer at War by Vasily Grossman
The Last Days by Wye8th
Chasing Cezanne by Peter Mayle
Suzanne Robinson by The Legend
An Improvised Life by Alan Arkin
Yours for Eternity: A Love Story on Death Row by Damien Echols, Lorri Davis
Last of the Mighty by Phineas Foxx
Train's Clash (The Last Riders Book 9) by Jamie Begley