The Ultimate Guide to Kink (10 page) 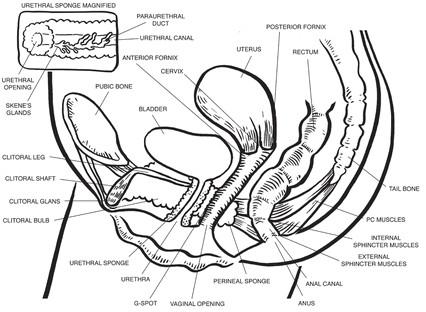 The vagina is a muscular tube that connects the cervix with the exterior of the body. (See Illustration 4.1: Female anatomy. It may be helpful for you to refer to this as you read through the next section.) It’s a multifunctional organ—it does everything from encouraging ejaculation during intercourse to passing a baby from the uterus into the world. The urethra and the glans of the clitoris are located just above the vaginal opening. It’s all protected by the labia majora and the labia minora, which cover the vaginal opening. While some people have smaller labia than others, everyone’s labia are very sensitive, and they can be one focus of stimulation during fisting. The entire vulva is a highly vascular area; a large number of blood vessels bring blood flow to the area, and a tremendous number of small capillaries are just under the surface of the vaginal tissue. This density of nerve endings, especially in the clitoris, means that even small, gentle sensations can create a very big impact in this region.

It’s important to remember that a number of other things are going on in the vaginal area. The G-spot, located on the front wall of the vagina, is for some people a highly sensitive area, responding especially well to pressure from fingers or hands. The A-spot (or anterior fornix) is another especially sensitive area, located at the deepest part of the vagina where the vaginal wall connects with the cervix. There is also the structure of the clitoris, which reaches up into the body and surrounds the vaginal walls. Visualizing the various anatomical areas when fisting can help you create more specific sensations and even stronger orgasms for your partner.

A word about pronouns: For consistency’s sake, I’ve chosen to use female pronouns to refer to the person being fisted. However, I recognize that people of all genders can have vaginas, and I encourage you to use the pronoun(s) that apply to you.

I never had an orgasm from fisting until one of my previous dominants decided to use a Hitachi Magic Wand on my clit while he was pressing upward on my G-spot. The combination of being absolutely filled by his hand, along with this unstoppable vibration on my clit, connected the two sensations in a way that I’d never experienced before—I felt like he was pushing my G-spot up toward my clit, and the orgasm that happened (along with the resulting ejaculation) took us both by surprise. Fortunately, I’ve been able to make it happen again and again, and it’s even added to the ways that I can come when I’m playing on my own!

Vaginal walls are relatively stretchy—they are designed to allow for childbirth, after all—but there are a few factors that can affect the elasticity of the vagina and therefore a person’s ability to be fisted. The three main limiting factors are hormones, surgery, and bone structure.

Estrogen levels are part of what helps the vagina to remain elastic; those with a low level of estrogen, whether as a result of menopause, hormone therapy, or other causes, will find that the longer their estrogen level is low, the thinner and less elastic the vaginal walls become, and the more likely they are to tear. They may additionally find that they have problems with dryness and irritation due to a lower level of vaginal lubrication, which may make penetration more painful. There are a number of treatments for this, including estrogen suppositories and creams, that some people can use to reduce the irritation and help the vaginal walls retain more of their elasticity. Regardless of what treatment is used, when you know that your partner has lower estrogen levels, make sure to use plenty of lube, and choose lube that is less likely to contain irritants. And take plenty of time to warm her up.

Those who have had surgery on or around the vagina may also experience challenges with being fisted, primarily due to the presence of scar tissue. Scar tissue does not stretch like the skin that it covers; additionally, the skin around it may be weaker than usual. To help avoid pain, take care not to place too much pressure against the scar tissue—again, use plenty of lube. A number of women have had their vaginas created or altered through surgical means; while they may not have the natural stretchability of other vaginas, it is possible to fist them. The key to this is how much these women dilate and how much they engage in penetrative play; those who do either or both regularly are more likely to be able to receive a lover’s hand. However, this is one of those cases where your mileage may vary; even those who do stretch regularly still may not be able to get a whole hand inside them.

There is also build and bone structure to consider. Some people are “built small”—they may not have the ability to take a fist without a lot of work, if ever. Some people find that being fisted is very easy. In general, women who have given birth have an easier time with being fisted, as the ligaments in their pelvis loosen somewhat and are able to accommodate larger objects.

Together, all of these factors—as well as psychological and physical comfort—contribute to how easily someone can be penetrated with larger objects, including fists; by being aware of these factors and working with them, we can plan our scenes to be more pleasurable and longer lasting.

I also highly recommend gloves, even for partners who are fluid-bonded. Our hands have a number of small rough spots, including hangnails, calluses, and dry skin, that can scratch and scrape the vaginal tissue; with a gloved hand you create a safe, smooth surface for fisting—it’s like the world’s most perfect sex toy! Both latex and nonlatex gloves are available; I prefer to use nitrile gloves (a nonlatex material), as they are unlikely to cause irritation to my partner and tend to be stronger than latex gloves. If you have longer fingernails, I recommend either clipping and filing them or tucking small bits of cotton ball into the fingertips of the gloves to cover your nails and keep them from feeling sharp for your partner.

I’ve gotten to the point where I’ve made the preparations for a fisting part of the foreplay. I text her from work to tell her to get the supplies out, and she knows how I want everything laid out. I have her get out the wrist restraints (we like her hands to be held back to keep her from being able to touch herself) and turn the temperature up in the bedroom so it’s nice and warm. By the time I get to her house, I’m worked up, she’s already turned on, and the scene has started before we even touch.

Relaxation is the key to fisting. Having the bottom in a position that relieves the tension on her legs and hips goes a long way toward helping her open up to your hand. For some people, this may mean that they are most comfortable on their back with their ankles propped up in ankle straps on a sling or on their partners shoulders (my personal favorite); for others, it may mean that they’re lying on their side, or on their belly, or even on all fours. Trying a few different positions, even changing it up in the middle of the scene, can offer a lot of insight into what works—especially when it gives you an opportunity to slip your hand in at different angles and adjust to the changing physiology of your partner.

Some people like to use chemical means to help relax: “poppers,” a glass of wine, some pot, or another substance that they feel helps them ease into being fisted. Unfortunately, when we take chemicals to relax, we also lose some of our ability to feel and respond accurately to sensations that may be the precursor to injuries. Part of being risk aware is both understanding and acknowledging the risks of playing in a particular way; we take steps to minimize or eliminate as much of those risks as possible. With fisting, it’s worth giving some thought to and discussing whether it’s a good idea to be under the influence of any mood-altering substances, legal or illegal, that may have wide-ranging repercussions for either partner’s health.

Mendoza in Hollywood by Kage Baker
Small World by Tabitha King
Asarlai Wars 1: Warrior Wench by Marie Andreas
Sins of the Storm by Jenna Mills
Beyond the Call of Duty by Wendy Stone
Havemercy by Jones, Jaida & Bennett, Danielle
Bia's War by Joanna Larum
The System - A Detroit Story - by John Silver
A Vineyard Killing by Philip R. Craig
Three Button Trick and Other Stories by Nicola Barker