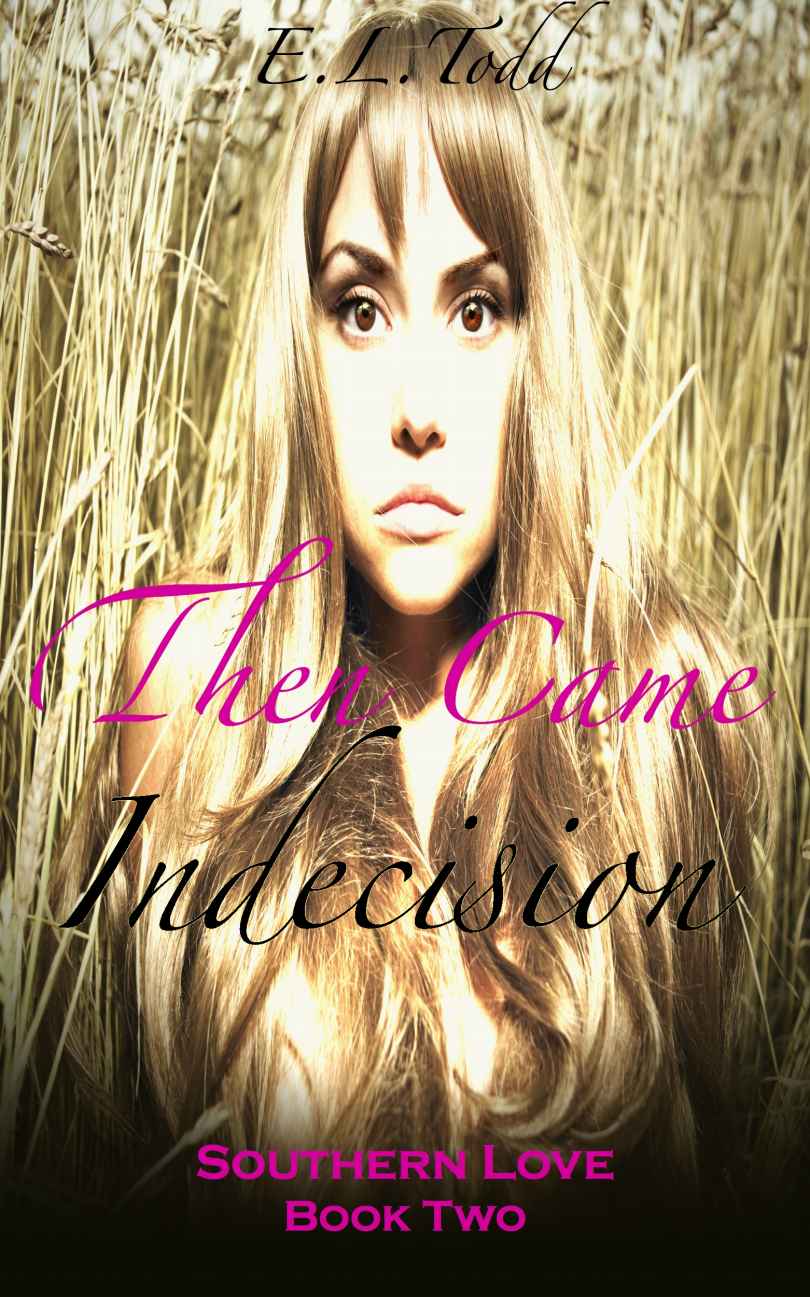 This is a work of fiction. All the characters and events portrayed in this novel are fictitious or used fictitiously. All right
s reserved. No part of this book may be reproduced in any form or by any electronic or mechanical means, including information storage and retrieval systems, without written permission from the publisher or author, except in the case of a reviewer, who may quote brief passages in a review.

There were only a few cars left in the parking lot by the time they left the diner. Alexandra suddenly realized how alone they were. The humid heat from the dying summer touched her skin and made warm. Paul walked beside her as they headed to her truck.

Alexandra smiled. “It’s necessary when you live in the country.”

“Well, I guess getting a rental car was a big mistake.”

She chuckled. “I think you’ll be okay.” They stopped when they came to her door. She felt his heated gaze on her face, examining her features, particularly her lips. “Paul, you really should go. Everything is waiting for you in New York; your friends, family, and work.”

“No,” he said gently. “You’re everything. And I’m not leaving without you.”

She saw the determination in his blue eyes. They were bright and beautiful, but they didn’t have the unnatural glow that Blaise did. “Where are you staying?”

“I was hoping to stay with you and Aunt Martha. She seemed to like me last time I came down.”

Paul smiled. “You’re going to make me stay in a hotel?”

She tucked a strand of hair behind her ear. The idea of staying in the same house as him made her feel uneasy. Even if he slept on the couch, she would still nervous. “I—I just don’t think it’s a good idea.”

“And why not?” He still had a wide grin on his face.

He stepped closer to her. “I don’t need a lot of room. One blanket, one pillow. Remember?”

How could she forget? The first time she spent the night at his apartment, he only had a thin blanket and a pillow. Everything else was still in the wash and they were too tire
d to wait for it to finish. But they huddled together, wrapping their legs and arms around each other, and realized they didn’t need much more than that anyway. Ever since then, that’s what they always used. “Uh, I still don’t think it would be a good idea.”

Alexandra tucked another strand of hair behind her ear.

Her eyes widened. “What?” Did he just ask about her and Blaise?

“Between us. It was always amazing. I miss it.” He stared at her face, watching her reaction.

He put his hands in his pockets. “But you know what I miss the most?”

She said nothing, averting her gaze.

He closed the gap between them and wrapped his arms around her waist, his large fingers moving up her shirt slightly. They rested on the skin of her hips, rubbing gently. He rested his head on top of hers, holding her close. When he sighed deeply, she knew she was stuck.

The touch immediately felt familiar. Everything fit like it always did. Her face immediately rested against his chest. The sound of his beating heart moved into her ear, echoing in her mind. The faint smell of his cologne drifted into her nostrils, bringing her back to nights of their lovemaking. For a moment, she felt safe. Paul had been the constant thing in her life for the past few years. When she was nervous if she would pass her classes, he always assured her she would. When she couldn’t make her rent, Paul always paid for it. And when she needed anything, he
always answered on the first ring. He had been the most amazing boyfriend—most of the time. The last few months of their relationship were a different story. Alexandra pulled away.

Paul looked stung as she left his arms. His hands moved to his pockets.

“I should go,” she whispered.

“It’s getting late.” He stared at the deserted parking lot then back at her. “Can I take you to dinner tomorrow?”

“Let me rephrase that. You will be spending time with me. I’ll either pop up out of nowhere or we can schedule times. It’s up to you how you want to do this. But I didn’t come
out here to rot in a hotel.”

“Well, I have school tomorrow then work.”

“I’ll take you out after work, then.”

“I get off pretty late,” she said.

“Okay.” She grabbed her keys and unlocked her door.

Paul opened it and helped her into the seat. He rested his hand on the steering wheel, caging her in.

Alexandra wondered if he was going to kiss her. His movements suggest
ed he would. He leaned in, and she took a deep breath, not wanting that to happen. Paul seemed to recognize her unease because he pulled back.

He shut the door then walked back to his car. He waited for her to leave first before he pulled out of the parking lot and drove to his hotel.

Lisa and Hannah both gave her a sympathetic look.

Alexandra turned to Blaise
. “I’m really sorry about the way he’s treating you.”

“Don’t worry about it,” he said quickly. “It’s nothing I can’t handle.”

“How are you holding up?” Lisa asked.

“I’m okay,” Alexandra said sadly. “He’s determined to drag this out as long as possible, but that just makes it more dif
ficult for me.” She dipped her fry into her ketchup then smeared it across the plate. Alexandra hadn’t had an appetite in a long time.

Hannah looked at her. “Did you love him?”

The question startled her. “Uh…I thought I did.”

“Sometimes I think he’s telling the truth about everything,” Alexandra said. “But then I realize how gullible I am. I’m a horrible judge of character.”

“I wouldn’t say that,”
Lisa said. “You were the victim here. Don’t beat yourself up about it.”

“But I should have pieced it together,” Alexandra said. “He never invited me to his house and I never met any of his friends…I feel stupid now.”

“Don’t,” Gabe said. He put his arm around her shoulder.

Alexandra didn’t like th
e touch. Now that Blaise said Gabe was trying to get his chance with her, she started to notice his strong affection. He always made excuses to see her, and when they were together, he found a way to be affectionate with her.

“I should get to work,” Alexandra said. She opened her wallet to grab her cash.

She threw the money down. “No, it’s okay. I’ll see you later.” After she left, she drove to the hospital. She was
half an hour early to her shift but she wanted to get away from Gabe. She already had to deal with Paul and Blaise. She couldn’t handle Gabe too.

Her workday at the hospital wa
s boring. They didn’t have many patients so there wasn’t a lot to do. Dr. Kenley was there and he was rude to Alexandra like usual. Everyone else seemed to like her, and the nurses always seemed to check their orders to prevent another mistake. That’s exactly what Alexandra wanted.

She wanted her workday to end, but at the same time she didn’t. Paul would be waiting for her as soon as she walked outside. It was still unreal seeing him in Georgia. She couldn’t believe he came after her, and more importantly, he refused to leave unless she came with him. Her head was spinning.

When her shift was over, she changed in the locker room then headed to the parking lot. Paul was standing by her truck, holding a bag.

“You know what you should do?”

“Be a nurse,” he said with a smile. “You definitely won’t be bored then.”

Paul pulled her into a hug. The affection surprised her. He held her tightly for a moment before he pulled away. “Are you hungry?”

“Then let’s go.” He walked to his car and she followed behind him. He opened the passenger door and got her insid
e before he moved to the driver seat.

Alexandra looked at him. “Since you don’t know Georgia at all, I’m not sure what you have in mind.”

“Well, I had all day to twirl my thumbs. I did a little exploring.” He started the car then left the parking lot. After driving into the fields for a few minutes, he pulled over into a deserted pasture. The stars were bright now that they were away from the city. The lights from the dashboard were bright, and a U2 song was playing. It was her favorite band.

Paul opened the bag. “Cucumber and cheese sandwiches. Your favorite.”

She smiled. “You remembered?”

He rolled his eyes. “Who likes cucumber sandwiches? It’s hard to forget.”

Alexandra laughed. “You have a point.”

They both ate their food while they stared out the window.

Alexandra immediately thought of Blaise.
“Nothing.” She looked down and picked at her sandwich. Then she tucked a strand of hair behind her ear.

She took a bite.

“You can talk to me about this other guy.”

He stared at her. “I’m not saying it doesn’t bother me, doesn’t make me want to rip my heart out s
o it will stop hurting so much, but we’re still best friends. I want to know all your problems, even if it hurts me. You remember why we broke up to begin with?”

“I felt so guilty I couldn’t eat or sleep. What if you left me because you thought I was a horrible person?”

His eyes softened. “Alex, I know you would never hurt someone on purpose. It was an accident, an honest mistake. Of course I wouldn’t leave you because of that.”

“I was just scared. I couldn’t stand myself anymore. How could you?”

“Well, I guess I understand why you wouldn’t let me love you. You can’t let someone love you if you don’t love yourself first.”

Alexandra bit into a cucumber then chewed it slowly.

He grabbed her face and turned it toward him.

She stilled at the movement.

“I love you no matter what you do. It doesn’t matter if you accept it. But you need to let this go. Please let it go.”