Read Valley of the Worm Online

Valley of the Worm 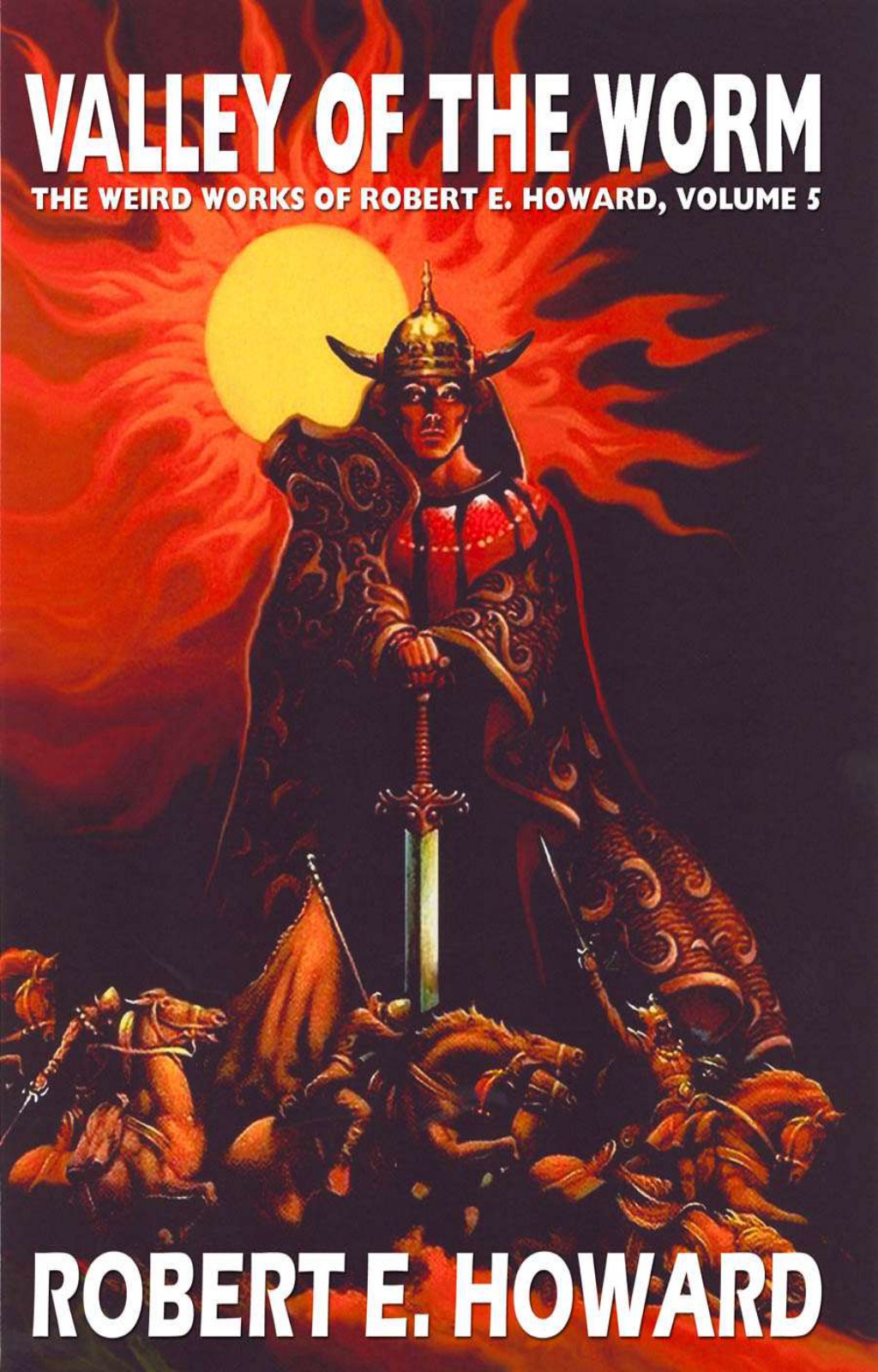 Out of the Past: The Persistence of Evil in the Fiction of Robert E. Howard, by James Reasoner

The Man on the Ground

The Pool of the Black One

One Who Comes at Eventide

Rogues in the House

The Valley of the Worm

Gods of the North

Shadows in the Moonlight

OUT OF THE PAST
The Persistence of Evil in the Fiction of Robert E. Howard
by James Reasoner

One of Robert E. Howard’s deep and abiding interests was the study of history.

His bookshelf contained not only multi-volume sets such as Grolier’s
The Book of History
and
Compton’s Pictured Encyclopedia
, but also more specific studies ranging from the ancient—
The Prehistoric World
by E.A. Allen—to the comparatively recent in Howard’s time—
The Saga Of Billy The Kid
by Walter Noble Burns (though some would argue that Burns’ books are as much fiction as history—but that’s not our concern here).

In addition to his reading, throughout his life Howard was fascinated with oral history, soaking up the tales of the past spun by the older people around him.

One of the inescapable elements of history is the effect of the past on the present.

Authors in other genres, such as Ross Macdonald in mysteries and Walt Coburn in Westerns, have explored the way buried evil and dark secrets almost inevitably come to the surface and have profound effects on the lives of people in the current day.

So, too, many of Howard’s stories explore this same theme.

In Howard’s case, however, some of the evils are buried literally, not figuratively, and they don’t just affect the present from a distance—they stride menacingly through it, as vital and dangerous as ever.

This is certainly the case in “Black Colossus” (
Weird Tales
, June 1933), in which ancient and apparently long dead sorcerer Thugra Khotan returns to life to threaten the kingdom of Khoraja, which happens to employ a certain captain of mercenaries from Cimmeria.

Apparently, in the Hyborian Age, you can keep a good man down—but not a bad one.

“Black Colossus” is an important story, as well, because although in previous stories we have seen Conan as both a king and a young thief, in “Black Colossus” we see him take the first steps in the metamorphosis between those two stages of his life, a change profound enough to be commented upon by his comrade in arms Amalric.

(As an aside on this story, it’s also a prime example of how Howard adapted the geography of Texas to his fantasy settings.

The Pass of Shamla, where the army of Khoraja does battle with the hordes of Natohk, is a dead ringer for places along the edge of the Caprock Escarpment in West Texas that divides the rest of Texas from the Llano Estacado, or Staked Plains.

Some of these locations are so isolated you could almost believe that you were back in the Hyborian Age . . .)

At first glance, “The Man on the Ground” (
Weird Tales
, July 1933) seems to be a simple Western story about a feud between Texas cowpunchers Cal Reynolds and Esau Brill.

But things are seldom as simple as they first appear in Howard’s stories.

He makes a point of mentioning how long the feud between Reynolds and Brill has been going on before they come to their final showdown.

In fact, the origin of the hostility between the two men is so far in the past that neither of them really remembers why they hate each other.

But hate each other they do, and with such a passion that over the course of time that hatred has taken on a life of its own.

In Howard’s fiction, hate is the strongest emotion of all, too strong, when nurtured over time, to be conquered even by death.

In “The Slithering Shadow” (aka “Xuthal of the Dusk”), first published in the September 1933 issue of
Weird Tales
, Howard does something for the first time in the Conan series:

he places the reader in the middle of the action at Conan’s side without any preliminary exposition, choosing instead to fill in the background with short paragraphs later on.

Conan and his companion, the Brythunian girl Natala, find themselves facing death from thirst in the middle of a trackless desert, when Conan spots a mysterious city ahead of them.

In that city lies not only their possible salvation but also an ancient evil that has resided there for generations . . . because in the world of Howard’s fiction, evil never dies easily.

“The Slithering Shadow” serves as a template of sorts for the later “Red Nails”, as well as countless comic book stories.

“The Pool of the Black One” (
Weird Tales
, October 1933) was published only a month after “The Slithering Shadow” and also features a lost city and a timeless menace.

While we admire Howard’s artistic achievements, and rightly so, we should also remember that he was a consummate professional writer.

He knew that if something worked once (i.e., got him a sale), it was likely to work again.

“The Pool of the Black One” is a yarn that gets off to a fast-moving start and seldom slows down.

Howard isn’t content just to repeat himself in this story, however.

He gives us a different but equally colorful background as the one in the previous story and in the battle with Zaporavo provides a vivid example of just how ruthless Conan can be when he wants to.

The final paragraph of this tale is one of my favorites as well, a near-perfect expression of Conan’s philosophy.

From the Hyborian Age equivalent of the Spanish Main, Howard moves back to Texas for his next outing in
Weird Tales
, “Old Garfield’s Heart” (December, 1933).

Howard’s Texas-based horror stories such as this one, “The Valley of the Lost”, and “The Horror From the Mound” are some of my favorites because in them he begins to write about his homeland, capturing it with such verve and accuracy that they serve as indicators of where he might have gone with his career had he lived.

My belief is that he could have become one of the finest regional novelists the country ever produced.

“Old Garfield’s Heart” is one of the Lost Knob stories, Lost Knob being a thinly-disguised version of Cross Plains.

The past plays an important part in this story as well, as Howard gives us in Jim Garfield a man who has lived beyond his alloted years, a man whose very continued existence relies on a mystical power from the dawn of time.

This is one of Howard’s best stories.

Of course, Howard didn’t always use the same themes and story devices.

In “Rogues in the House”, first published in the January 1934 issue of
Weird Tales
, there is no ancient evil, no horror out of time.

What we have in this tale of Conan and two mismatched allies trying to survive in the house of a sinister priest where things have gone terribly wrong is a breathlessly paced, highly entertaining yarn.

The epic one-on-one battle that provides the climax of this story also served as fodder for numerous other scenes, both in Howard’s later work and in the various pastiches.

“The Valley of the Worm” (
Weird Tales
, February 1934) makes as much use of time as any of Howard’s stories, and more than most.

It’s one of the James Allison stories, narrated by a man contemporary to Howard’s time, an invalid who escapes his current confining existence by remembering his past lives.

Allison has been reincarnated countless times, always as a warrior, but unlike most people, he remembers every one of his almost infinite lives.

In “The Valley of the Worm”, he takes us back to the time, millennia ago, when he was known as Niord, a member of a wandering, Viking-like people who travel far from their home to establish a foothold in a jungle-covered land inhabited by savage Picts.

This land holds more than Picts, however.

A force of evil that was ancient even then also lurks there, and it is inevitable that Niord will confront it.

“The Valley of the Worm” is a perfect example of how Howard could pack enough plot into a novelette to sustain many a modern-day trilogy of the sort referred to by Howard scholar Morgan Holmes as “corporate fantasy”.

In this one story, Howard brings into play two of his interests, reincarnation and racial drift, as well as a horror out of time that is decidedly and deliberately Lovecraftian.

The writing is vivid and packed with energy, and it seems obvious that this story was special to Howard.

It’s also a favorite of many Howard fans, and rightly so.

“Gods of the North”, published in the March 1934 issue of the amateur magazine
Fantasy Fan
, is a very lightly rewritten version of the Conan story “The Frost Giant’s Daughter”, with Conan replaced by the character Amra of Akbitana.

It’s a change in name only; otherwise the character and the story are identical.

The original version was the second story Howard wrote about Conan.

In what some have termed a serious lapse in judgment,
Weird Tales
editor Farnsworth Wright rejected the story, leading Howard to change Conan to Amra and allow
Fantasy Fan
to publish it.

The story as Howard originally wrote it never appeared in Howard’s lifetime.

Not surprisingly, since nothing was changed except the name of the lead character, “Gods of the North” reads just like a Conan story, and a good one at that.

The writing is full of color and is a bit more poetic than Howard would attempt in some of the later stories.

The new title isn’t quite as evocative as the original, but it’s still appropriate.

Howard must have really liked the story if he was willing to make the changes and allow it to be published in an amateur magazine, just to get it into print.

Finally, “Shadows in the Moonlight” (original title “Iron Shadows in the Moon”), although published in the April 1934 issue of
Weird Tales
, was actually written over a year earlier and is the first in a sort of series-within-the-series, in which Conan and some beautiful wench he has rescued from death (or a fate worse than) stumble upon a lost city and confront an ancient evil that lurks there.

Having found a good formula, pro that he was, Howard returns to this set-up in “The Slithering Shadow” and “The Pool of the Black One” (included in this volume) and other stories later on.

Despite the sameness of their plots, these stories are made distinctive by Howard’s descriptive and storytelling abilities.

Even reading them one after the other, each stands out in my mind.

This volume also contains two of Howard’s poems, “One Who Comes at Eventide” and “To A Woman (‘Though fathoms . . .’), both of which appeared in
Modern American Poetry
, published by Galleon Press in 1933.

I won’t pretend to know much about poetry, but both of these verses are fine examples of how Howard wrote vividly about hatred and the desire for revenge.

What’s interesting about their pairing is that they illuminate both sides of the vengeance coin:

one is from the point of view of a sinner, the other that of one sinned against.

The imagery in both is striking and powerful.

Villainy out of the past is hardly the only theme that surfaces frequently in Howard’s work, of course.

He was a complex writer with many interests, and he was also a highly skilled professional with the ability to mold entertaining, fast-moving stories out of many different sorts of clay.

He’s been one of my favorite authors for nearly forty years.

Read the stories in this volume, and if you’re not already a Howard fan, you soon will be.