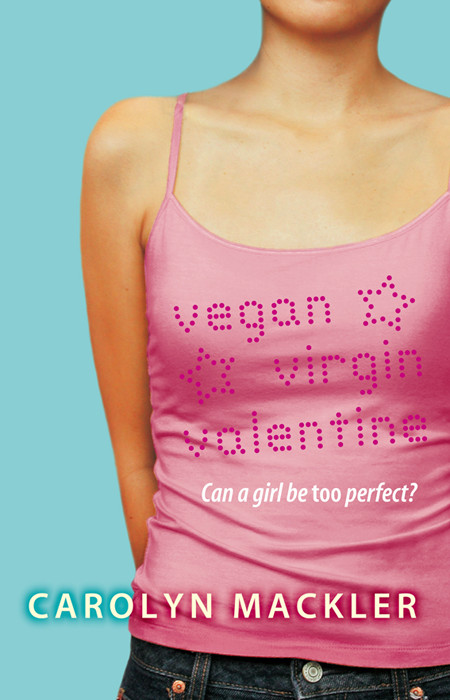 For my dear friend,
Jenny Greenberg,
with love

The first thing V did upon arriving in Brockport was fool around with my ex-boyfriend. Well, not the first, but it happened within twenty-four hours of her plane landing at the Greater Rochester International Airport.

Her full name is Vivienne Vail Valentine, but she only answers to V.

My name is Mara Valentine. I’m seventeen and a senior in high school. I’ll turn eighteen in late July, which makes me a Leo. Not that I know anything about astrology except my own sign. Anyway, it’s a total joke because according to the
Democrat and Chronicle
horoscope page, the moon is heading into my house of romance this spring. Well, the only romance that ever entered my galaxy was Travis Hart. We were together spring of junior year. He definitely wanted more than my moon and he wanted it at the speed of light. He dumped me over Instant Messenger three days before the college-entrance exams – the SATs. Thank God I still cracked a score of fourteen hundred, or I may have cracked his skull.

I’m a straight-A student and, yes, my parents both have that
MY CHILD IS AN HONOR STUDENT
bumper sticker on their cars. Those are now sharing fender space with the Yale bumper stickers they stuck on in December when I got accepted for early admission.

Getting into Yale wasn’t a total shocker. I’ve been in student government since junior high. Over the years, I’ve done pressure-cooker summer programs and Model UN and Odyssey of the Mind. I even got a part-time job at a café so my college application wouldn’t make me look like a typical upper-middle-class brat who subsists solely on a hefty allowance.

My dad is a dentist with an office in Brockport. My mom does fundraising for the University of Rochester. I got my height from my dad. I’m a five-foot-ten vegan. I haven’t touched dairy or meat or eggs in seven months, though sometimes I dream about grilled-cheese sandwiches. I’m thin bordering on gangly with chin-length brown hair and hazel eyes. I have type A blood, a type A personality, and wear an A-cup bra.

My parents had me when they were in their forties. Now they’re in their early sixties, which makes them ten or fifteen years older than most people’s parents. Not that they show their age, aside from the fact that they generally go to bed around sunset. We NEVER talk about sex, so I don’t know the specifics of my eleventh-hour conception. But I’m convinced that my parents brought me into this world to compensate for my older sister, Aimee, who was eighteen and skidding down a road to nowhere.

When I was still a baby, Aimee dropped out of college and moved to Vail, Colorado, to pursue her dream of becoming a ski instructor. Instead, she pursued a ski instructor and got pregnant by a guy she’s only ever referred to as the Sperm Donor. V was born in September, by which time Aimee was living on a vineyard in California and pursuing her new dream of learning to make red wine.

By all logical deductions, V is my niece. But the whole aunt-and-niece-are-one-year-apart thing is too freaky to think about, so I basically try not to.

Aimee is now thirty-five and can’t stick to one decision about her career, geographic location, or sexual partner. For the past six months, she’s been living with a guy named Michael in San Diego and managing a Tex-Mex restaurant. Before that, she and Elias were tending an organic farm outside of Eugene, Oregon. Two years ago, it was bartending in New Orleans and an artists’ commune in Vermont.

In between Aimee’s transcontinental moves, she and V crash with us in Brockport for a few days. Aimee stays in the guest room upstairs. V sleeps on the air mattress on my floor. I dread these visits. If V and I weren’t related, we’d never end up in the same stratosphere, much less the same bedroom. We’re both tall and thin, but the similarities end there. V is one of those in-your-face girls. Besides, she acquires a new bad habit in every town. In Vermont, she lost her virginity to an eighteen-year-old harmonica player. She kept me up half the night describing their sexual encounters. In New Orleans, V honed her nymphomaniacal skills and added more guys to her list. On the organic farm, of all places, she started smoking cigarettes. She burned through two packs while leaning out my window over the course of five nights.

My parents are always wringing their hands about Aimee and V. They long ago gave up on the idea of Aimee finishing college. Now they’re just hoping she’ll put down roots for more than a few months. But their pressing concern is V. They’re frequently calling Aimee and offering to pay for V to take singing lessons or an SAT prep course. More than once, I’ve overheard my parents say things like, “V has so much unrealized potential. If only she lived with us, we could do wonders with her.”

So that explains how much pressure is on me. Aimee has always been the Screwup. V, the Unrealized Potential. And me, the Only Hope.

But then, in January of my senior year, Aimee unloaded her daughter in Brockport. Less than a day later, V realized her potential with Travis Hart in the boys’ locker room of my high school, which left me with only one hope: that V would get the hell out of my life.

My parents tag-teamed me on a blustery Monday evening in early January. It was flurrying like crazy out, one of those nights that practically guarantees school will be canceled the next day. Even so, I was sitting at my desk, studying for a quiz in psychology. My parents came into my room, stood on either side of me, and asked if we could have an impromptu Family Meeting.

“Aimee called a few days ago,” my dad said.

“She’s moving to Costa Rica!” my mom exclaimed. “She wants to pursue her dream of cooking traditional Central American cuisine.”

I glanced suspiciously at my mom’s face, her crow’s feet wrinkling, her smile lines cutting deep grooves. Usually when Aimee announces her latest dream, my mom gets all huffy about my older sister’s flakiness. But this time around, she looked way too happy.

My parents caught each other’s eye for a second and then my dad said, “There are no English-language schools in the region where Aimee is going…”

My pulse sped up as I got a terrifying hunch about where this was headed. Sure enough, I was right. My parents proceeded to inform me that they’d already bought V a one-way plane ticket to western New York. She was going to arrive in a week and a half and stay in the guest room upstairs and continue her junior year at my high school.

I was so shaken, all I could think to say was, “Aimee wants to cook traditional Central American cuisine?”

My mom nodded. “Supposedly they use a lot of interesting spices.”

“And so many variations on rice and beans,” my dad said.

I stared out my window. The powdery snow was sticking against the screen like confectioner’s sugar in a metal strainer.

“The upside is that V is coming to live with us,” my mom said. “Junior year is crucial. There’s still time to get her on the college track.”

“We’ve signed her up for an SAT prep course in Rochester,” my dad said. “Aimee says V doesn’t have her license yet, so Mom will drive her in on Tuesday evenings and I’ll take her on Thursdays.”

“Why didn’t you tell me all this before?” I finally asked.

My parents glanced at each other. I knew exactly why they didn’t tell me. They wanted everything signed and sealed before I could make any noise about it.

“We knew it would be an adjustment for you,” my mom said.

“You and V have your differences,” my dad said.

“But everything is going so well right now.” I was thinking how I’d been planning to fast-forward through my five remaining months in Brockport. I’ve already applied to an academic program at Johns Hopkins this summer, where I can complete two college courses in eight weeks. My mind is on the future, anticipating a swift departure, no bumps or hurdles or nicotine-addicted nympho houseguests.

My dad patted my shoulder. “You’ll be so busy with your own things, you won’t even notice V is here.”

I stared up at my dad. Were we thinking about the same person?

Nine days later, we picked V up from the airport. Her honey-colored hair was long, and her bangs hung like a venetian blind over her eyes. My mom kept sweeping them toward V’s temples, but they kept sliding back in place. Her nails, with chipped tangerine polish, were chewed all the way to the skin. There were freshly inked words on her left hand and fingers, but my parents were mauling her with hugs, so I couldn’t make out what they said. And despite the fact that western New York in January is colder than Antarctica, she was wearing a tank top, no bra, and jeans that were mutilated in the butt region.

When my dad went to retrieve the car from short-term parking, my mom took off her coat and insisted that V wear it. As V put on my mom’s coat, I eyed the backpack she’d just slid off her bare shoulders. It was one of those hemp-cloth stoner satchels that made me wonder what new smoking habits she’d acquired in San Diego.

On the car ride back to Brockport, my parents asked about Aimee’s newfound interest in Central American cuisine.

“Whatever,” V said, rolling her eyes. “It’s really about Campbell.”

We do not, I repeat, DO NOT talk about sex, much less orgasms, in the Valentine household.

My mom coughed. My dad swerved to the left, narrowly missing a Wegmans truck. No one said anything for a moment. V began gnawing at her fingernails. I stole a peek at her hand. Down each finger, from her pinkie to her pointer, she’d scrawled
fuck, fuck, fuck, fuck.
On her thumb it said
everyone.