Read Within My Heart Online 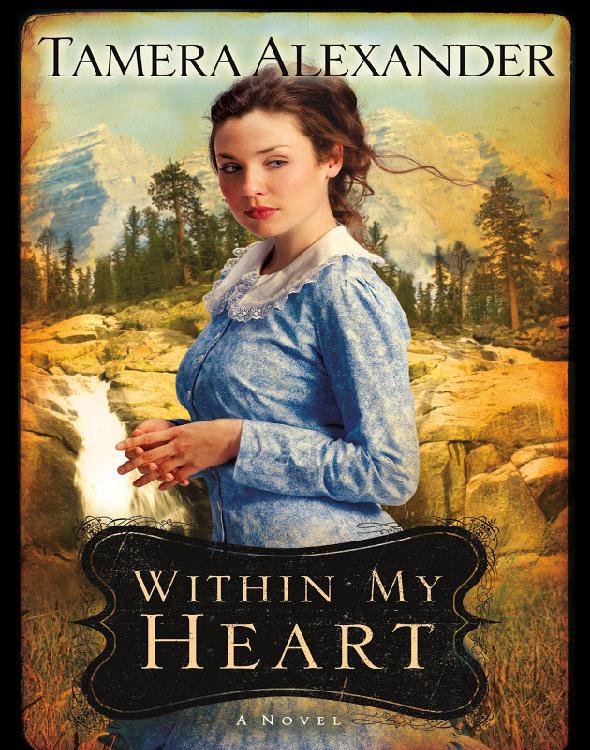 “Pull up a comfy armchair! The main and secondary characters [in
Beyond This Moment
] instantly become people to care about, and the plot twists will keep you turning pages long into the night. The themes of racial tolerance and second chances are as timely today as they were back in the early days of Colorado’s history.”

“Tamera Alexander is, without question, a must-read author who appreciates exceptional writing and loves to close a book with a heartfelt and satisfied sigh of delight!”

“. . . thought-provoking plot and poignant prose. . . . You will be whisked
Beyond This Moment
into another time and place.”

“Tamera Alexander . . . is extremely talented in how she paints the scenes so vividly you think you’re there watching the story unfold. The story as well as her characters are written with depth . . . you can feel the emotions they are experiencing.”

Once Upon a Romance

From a Distance
won the 2009 Christy Award for Best Historical Romance.

Beyond This Moment
won the 2010 Gayle Wilson Award of Excellence for Inspirational-Single Title and the Holt Medallion for Long Inspirational, and was a finalist for the 2010 Christy Award for Best Historical Romance.

From a Distance
Beyond This Moment
Within My Heart

Within My Heart
Copyright © 2010
Tamera Alexander

Scripture quotations identified KJV are from the King James Version of the Bible.

To my precious mother, June Gattis.
Heaven is sweeter still,
knowing you’re there.

Keep thy heart with all diligence; for out of it are the issues of life.

A Note from Tamera

H
alf hidden beneath the bare-limbed canopy of a dogwood tree, the gravedigger kept a reverent distance, patiently waiting for the last whispered prayers to be uttered and for the final mourner to take her leave. Only then did he step into the fading light, a worn spool of string clutched tight in his gnarled hand. Not much time left. It would be dark soon. And the last grave still needed tending before the pewter skies let loose their winter white.

The distant squeak of wagon wheels and the clomp of horses’ hooves faded into the night, leaving only the faint chirrup of crickets to companion the silence. Jessup Collum lifted the lid of the oblong pine box and with painstaking care, his arthritic fingers numb from the cold and marred with time and age, he tied a trailing length of string around the soldier’s right wrist. Mindful not to tie the string overtight, he looped the other end through a tiny bell.

He stared for a moment at the soldier’s face—the fallen Confederate a mere boy judging from his features—then he glanced around at the freshly covered graves. Deep in his bones he knew what he was doing was right, even if a bit out of the ordinary. There was no malice in his actions, and no sin, most certainly. Nothing that would bring serious offense. Though folks would surely think him a touch senile, if they saw. If they knew . . .

So many ways for a man to die, yet only one was needed for the earth to cradle a body back from whence all life had come.

Jessup turned that thought over in his mind as he’d done countless times before, not indifferent to the shadows stealing across the graveyard as the December sun hastened its retreat. Nightfall brought bitter cold, but not a breath of wind stirred, and each snowflake lofted downward from heaven, unhindered in its journey. He worked hurriedly to cover the last grave, mindful of the trailing string.

After the last shovel of dirt, he straightened, slowly, his crooked spine bearing the brunt of forty-two years of tending this hallowed ground—and of the last few hours of burying the bloodied remnants the Federal Army had abandoned following their assault. If the once-valiant Tennessee Army had been crippled in the battle at Franklin two weeks ago, then the past two days of fighting had delivered a mortal wound.

Jessup lit a torch and stared over row after row of mounded earth, the light casting a burnished glow around him. Too many and too young were those who lay here, going before their time. Before their lives had been lived out. He thought again of the young woman earlier who’d been last to take her leave.

Dark-haired with skin pale and smooth as cream, she’d knelt for the longest time at the grave on the far end, one he’d taken care in covering not two hours earlier, as he’d done the one at his feet just now. She’d huddled close by that grave, weeping, arms drawn around herself, looking as if she’d wanted to lay herself down and mark an end to her own life, what little she had left after losing the man buried there—“a decorated lieutenant from the Tennessee regiment, and my only brother,” she’d whispered through tears.

The wound on the lieutenant’s neck had told Jessup how the man had died, and the sutures and bloodstained bandages told him how hard some doctor had fought to save him. Shame how fast these soldiers were buried. No proper funeral. No time for one— not with the Federal Army bearing down hard, void of mercy, bent on conquering what little was left.

He tugged the worn collar of his coat closer about his neck and begged the Almighty, again, to intervene, to put an end to this war. Surely it couldn’t go on much longer.

Obsession by Buchbinder, Sharon
A Highland Duchess by Karen Ranney
The People of Forever Are Not Afraid by Shani Boianjiu
The Mark of Athena (The Heroes of Olympus, Book Three) by Riordan, Rick
Uncovering You 8: Redemption by Scarlett Edwards
Who's Your Daddy? by Lynda Sandoval
Dreams Do Come True by Jada Pearl
Below the Belt by Sarah Mayberry
Christmas With Nathan by Alice Raine
Five for Forever by Ames, Alex