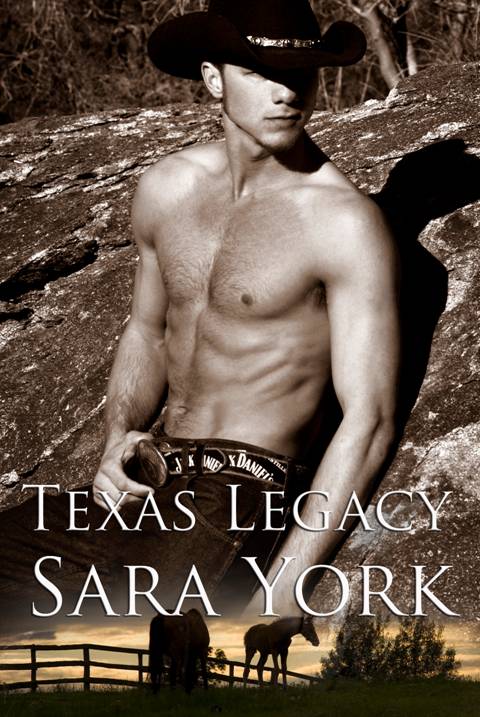 This book is a work of fiction.
All characters, places and events are from the author’s imagination and should
not be confused with fact. Any resemblance to persons, living or dead, events
or places is purely coincidental.

This ebook is licensed
for your personal enjoyment only. This ebook may not be re-sold or given away
to other people. If you would like to share this book with another person,
please purchase an additional copy for each recipient. If you’re reading this book
and did not purchase it, or it was not purchased for your use only, then please
return
and purchase your own copy. Thank you for
respecting the hard work of this author.

All rights reserved. No part of
this publication may be reproduced in any material form, whether by printing,
photocopying, scanning or otherwise without the written permission of Sara York.

Warning:
This book contains material that
only suitable for mature readers, hot cowboy love, man flesh and an amazing
relationships between men. Enjoy!

I'm always grateful for the people who help me along my way.
Rob Kristian of Rob Kristian Photography is an amazing man. I appreciate all of
the help he as given me. I hope you enjoy the wonderful photography provided
for the Texas Legacy cover. If you would like to contact Rob Kristian you can
connect on Facebook
https://www.facebook.com/pages/Rob-Kristian-Photography/128963870458386?fref=ts

I also would like to thank John Charles Dickson. John is one
of those special people who always makes you smile. I'm grateful for his
friendship and his input. You can connect with John Charles Dickson on
Facebook. https://www.facebook.com/pages/John-Charles-Dickson/603579952989404?fref=ts

I would like to thank Adriana D'Apolito and Yvette Ganoe for
their help in getting this book ready. Having a great beta reader makes all the
difference in the world.

I would also like to thank Liz Bichmann for working with me
on this book.

I dedicate Texas Legacy to Alan Bounville who completed his
6,000-mile, 21-month march for LGBT equality that spanned from Seattle,
Washington, to the front yard of the White House in Washington, DC on February
23, 2013. Alan believes that all should have equal rights. I agree! Ten percent
of the money raised during Alan's walk went to benefit the Transgender Legal
Defense & Education Fund.

Grant Stovall read over the directives, memorizing the
details for his next mission. Since coming to Wild Bluff he'd taken on more
responsibilities, becoming a team lead and earning the right to go out on a
mission solo. Duff Whitaker had started the ranch four years ago when the
Pentagon had approached him. Of course all of their missions were beyond dark,
so secretive their existence was virtually unknown.

Ninety percent of the time he and the other men on the ranch were
cowboys, but once every few months the garbage needed to be taken care of. He
didn't know which he preferred, the long, hard days of ranch work or the
precision required for an assassin. Every time he went out on a mission he
prayed it would go off without a hitch. So far, he'd been lucky.

This week he was on his way to the Bahamas. Their target was
staying in an exclusive resort. He couldn’t just go in and kill Christopher
Wylans, he had to wait for the signal. It would make it easier if he could do a
quick in and out. Wet work when you waited proved to be more difficult. That's
when mistakes happened. And he couldn’t afford any mistakes.

The door banged open behind him and Hank stumbled in. He'd
joined the group two months ago. At first, Grant hadn't liked him, but he'd proven
his worth on the range, now all he needed to do was prove he could work well on
a mission.

"Hey, Grant, heard you were leaving for a few
weeks."

Hank laughed and grabbed an apple out of the bowl on the
table. "I'm waiting for my first invitation to the dance."

"You'll get one soon enough. We won't leave you with an
un-popped cherry for long."

Hank ambled across the room to the stairs, he loped up the
first two then stopped. "Hey, be careful out there. I actually like you
and would hate to lose your friendship."

"Thanks and I will be careful. Hell, the deadliest
weapon in the world is a Marine and his rifle and I plan on keeping my rifle
close.
"

"Ha, once a Marine always a Marine."

"Oorah!" Grant called out, watching Hank retreat up
the stairs. A few of the guys were Army, there were a couple of Seals and then
there were the guys who were the Marines. All in all, their team was well
versed and never outmanned.

Grant turned back to his packet, studying the maps, the
directions and most of all, the man he hoped would be dead by the time he left
the Bahamas.

Mike Jarred banged his fist on the front door, thinking he
was going to have to kick the door in if Connor didn't open the damn thing. With
his fist balled up he slammed the door again, pissed as hell that Connor hadn't
even tried to call him in almost a month. He should have come by to check on the
big guy sooner, but he'd gone home, his assignment with the Texas Ranger
Division ending six weeks ago and his work with the DEA had kept him busy.
They'd talked every week since Riley passed away which had been good, though most
of the time Mike had to force the issue, but the last month Connor had ignored
his calls and texts. He feared the worst, praying the bastard was still alive.

He heard movement and almost shouted his thanks. The click of
the lock turning made his heart stall. The door cracked a bit and Mike pushed
it the rest of the way, banging Connor's head. Connor yelped.

"Thank God you're still alive." Mike breathed in
deeply then recoiled. "Fuck, you stink worse than a gutter outside a bar
on Bourbon Street in New Orleans. What the hell have you been doing?"

Connor staggered away, pitched to the left, overcorrected and
almost fell to the right. When he was near the couch he spun around and plopped
down, his gaze unfocused. He lifted a glass of amber liquid and downed it,
dropping the tumbler to the floor when he finished.

Mike watched the glass roll across the carpet and spied two
more discarded tumblers near the couch. Connor smelled like he hadn't showered
in a few days, maybe a week and the house had a stale, old food odor that made
him glad he hadn't stopped for a burger on the way over.

"Time to shower," Mike declared and stalked to
Connor, vowing to not budge on this. He would get Connor to rejoin the living
and become productive again even if it hurt them both.

Connor didn't move, which meant they were at a stalemate. Mike
chewed on his lower lip as he contemplated what to do next. He could force
Connor into the shower, but if the big guy wouldn’t come on his own, it might
be difficult.

"Not smelling the way you do." Mike hauled Connor
to his feet. For a moment he thought this was going to be easy then Connor
struggled, his hands slapping away Mike's hold. They wrestled and Mike realized
he would soon be outmatched. Connor might be drunk, but he was big and hadn't
lost any of his strength while he'd been on this bender.

Mike pushed hard against Connor and dislodged him a bit, just
enough to grab his cuffs. Connor came at him again, clasping his arms around
Mike.

"What are ya gonna do with those?"

Mike grabbed at Connor's arm but lost his hold. If the big
guy weren't drunk, he'd be on his ass and shit out of luck. "I'm going to
get you to calm down and stop being a jerk."

"Fuck you." Connor pinned him against the wall,
plastering his body against Mike's.

Panic filled Mike for a moment then Connor ground his hips
hard against Mike's, sending desire straight through him.

"Ain't this what you want? You gonna fuck me now?"
Connor yelled.

Mike froze, not knowing where this anger came from. "No,
you need a shower."

"He wouldn’t be dead if it weren't for you. You
fucker."

Connor reared back to punch Mike, but his balance was off. He
swung wide and missed. Mike grabbed Connor's wrist and slapped the cuffs on
then used his leverage, just like they'd taught him in training, to push Connor
to the wall, getting his other wrist into the cuffs.

They were both huffing and puffing, with Mike leaning into
Connor's back, their wrestling had heated up the space surrounding them and a
drop of sweat slowly slid down the side of Mike's face.

"Will you?" Connor whispered.

"Connor, this is not the time."

Mike grabbed Connor's shoulder and spun him around. The hopelessness
he saw in Connor's eyes surprised him. Connor dropped to his knees, his head
hung low and his shoulders shaking. Mike touched Connor's arm and he looked up,
his gaze pleading.

"Do me. Force me to take it. Make me suck your dick. Use
me. Shove your cock so far down my throat I gag."

Six months ago, Mike would have been game for Connor's
suggestions, but not with his friend feeling like crap. Mike dropped to his
knees in front of Connor and cupped his face. "Not like this. Let's get
you into that shower."

"You don't want me?" Connor closed his eyes, his
face screwed up with pain.

Mike reached around and undid the cuffs, pulling Connor to
his feet. "Time for a shower."

"I can do it on my own." Connor shrugged off Mike's
hold and headed to the bathroom, disrobing as he walked.

When Connor dropped his pants Mike sucked in a breath, his
head spinning with lust. He wanted Connor, wanted him so bad he almost took up
the man's offer. It would have been wrong. Taking advantage of Connor was the
last thing in the world Mike wanted to do, but when Connor had offered to suck
his dick, Mike's cock had jumped at the chance and lengthened in his pants.

The door slammed, shutting off Mike's view of the gorgeous
ass and perfect body. "Connor, what the fuck am I going to do with
you?"

The shower started and Mike made his way into Connor's
kitchen, looking through the cabinets and drawers, searching for what he needed
to make something for Connor to eat. The eggs weren't out of date and he found
some biscuit mix in the pantry. He cleaned a bit around the house, tossing old
food and washing the dishes. He sped through loading the dishwasher and started
the thing, not caring if it stole all of Connor's hot water. He glanced around
and began serious work on the food prep. Before the water turned off in the
shower, Mike had the biscuits cooking in the oven, coffee brewed, and eggs
scrambled.

Mike switched off the burners and set the timer on his phone
for the remaining three minutes on the biscuits before he tracked down Connor.
The man was still naked, his glorious dark skin flecked with water. Mike had to
bite his tongue to keep from rushing forward and grabbing Connor, pulling him
into a hug and kissing him long and hard.

Connor looked over his shoulder, his dark eyes dull with
pain. "I'm showered."

"Food is on the table. Come out when you're
dressed."

Mike backed into the den and moved to the table, clenching
his fist. Connor was making this so hard. Hell, Connor had lost his lover and
the way Mike had pressed him had been wrong. The blame that Connor had laid on
him was partially deserved. Not that he'd actually killed Riley, but he
understood how the guilt surfaced, making Mike the bad guy.