Attack on the High Seas! 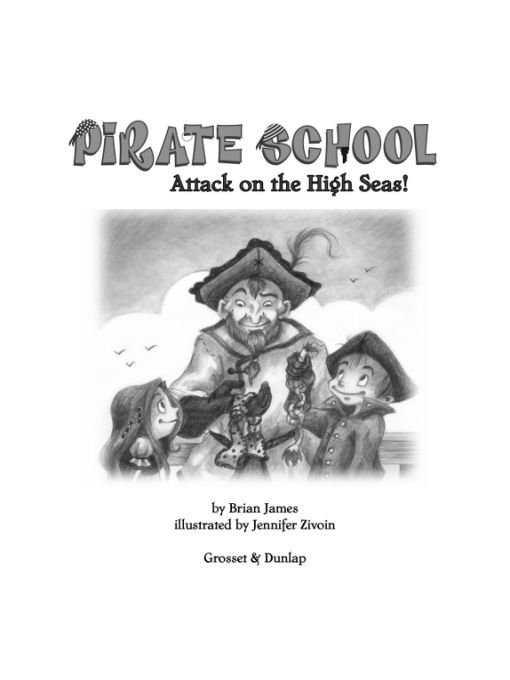 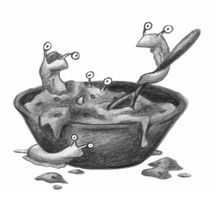 Chapter 1
Gruesome Grub!
“Shiver me timbers! What's that smell?” I asked Gary as we walked into the mess hall. I pinched my nose as tight as I could.
I've lived on pirate ships like the
Sea Rat
my whole life, so I'm used to stinky smells. But the stink that I smelled coming from the kitchen was worse than any other.
Gary wiped the sniffles from his nose and took a big sniff.
Then he sneezed!
Gary was my best bunkmate at Pirate School. He had come to the
Sea Rat
from another ship to learn how to be a pirate, just like me and the rest of our friends.
“I can't smell anything,” Gary said. He was still stuffed up from a cold he caught in the last storm. We were the ship's lookouts, and we got soaked. Then Gary got sickish.
“Then ye be the luckiest matey aboard,” I told him.
I looked around the mess hall. The place was filled with some of the rowdiest pirates the seas had ever known. Some had big scars across their faces and others wore eye patches to make them look scary. But they didn't scare Gary or me. That's because those pirates were our shipmates. And shipmates aren't allowed to scare other shipmatesâthat's a pirate rule.
I saw Inna right away. She was easy to spot. That's because Inna was the only pirate wearing a pretty dress. She's also the only pirate I know who brushes her hair. But instead of wearing her bandana around her head, Inna had it tied around her mouth and nose. I guess she was trying to block the smell, too.
“Ahoy!” I said. Then I asked her what stunk so bad.
Inna lifted the corner of her bandana and stuck out her tongue. “Breakfast!” she said, and pointed toward the kitchen.
I saw our friends Aaron and Vicky standing at the stove. They were both wearing matching aprons. They're twins, so they always wear matching things. And they look alike, too. They have the same dark eyes and same black hair. Only Vicky has long hair and Aaron has short hair.
“Ahoy, Pete!” Vicky said when she saw me.
“Ahoy right back,” I said.
Aaron was tossing something slimy into a giant pot while Vicky stirred. Neither of them seemed to mind the terrible smell.
“Arrr! What in the name of the seven seas are you guys doing?” I asked.
“Cooking!” Vicky said with a smile.
“Aye? Are you sure you're doing it right?” I asked.
“Aye!” Aaron answered. “It's an old family recipeâsea slug cereal. It's our favorite food. Captain Stinky Beard said we could make it because we saved the ship in the storm.”
I looked around and saw the other pirates eating bread and jam. I loved bread and jam! “Arrr, but what about them?” I asked.
Vicky said it was a special treat just for us pirate kids. Then she dipped the spoon into the pot and took it out. I saw a slug on the spoon and felt a little greenish.
Vicky took a little taste and rubbed her tummy. “Mmm-mmm! It's ready! You're just in time.”
“I am?” I asked, wrinkling up my nose. I was beginning to wish I'd been late.
“Aye! Grab a bowl and get some grub,” Vicky said.
I took a bowl and brought it over. Vicky scooped out some cereal and plopped it in. I did my best not to show that I was grossed out.
“Say when,” Vicky said.
“When!” I said right away.
“Avast! That's all?” Aaron said when he saw how little I'd taken. “I'm going to gobble up five times that much!”
“Don't be such a greedy guts!” Vicky shouted at him.
“Arrr. That's okay,” I said. “Ye cooked it, you should take as much as you want.”
“Aye, it's only fair!” Inna said, holding her hand over her bowl after Vicky put the tiniest of tiny scoops in it. Then Vicky asked her why she was wearing her bandana like a scarf.
“Um . . . germs,” Inna said, pointing at Gary's sniffling nose. Inna was always the best at thinking up ways to get out of trouble.
Gary was next. He took a peek at the sea slugs and gulped. Even if he couldn't smell it, he could see that it looked yucky. “Aye, no more for me!” he said. “I'd probably just spill it on the way to the table,” he added to be nice. And it worked, too, because Gary is the clumsiest pirate kid any of us have ever met. So Aaron and Vicky had no reason to think he was fibbing. We all sat at the table. All the other pirates took one whiff and moved a little bit away. Then they started to leave one by one until we were the only ones left in the mess hall.
I watched the sea slugs squirming around on my spoon. I had to close my eyes before taking a bite. I was surprised to find out it didn't taste as bad as it smelled. Believe it or not, it tasted a hundred million times WORSE!
“Yum,” I said, trying not to gag.
Inna brought her spoon up and lifted her scarf. She made a face like she was taking medicine, and then she took a bite. Her eyes opened so wide as she swallowed that I thought they were going to pop right out of her head.
“Mmm,” she squeaked.
“Aye? You like it?” Vicky asked.
I nodded.
Inna nodded, too. “But it could use a little cinnamon,” she said. Then she raced over to the cupboard and brought back the cinnamon. She scooped ten spoonfuls into her bowl.
When I looked over at Gary, I couldn't believe my eyes.
He'd already finished everything in his bowl.
Then I looked at the floor by his chair and saw a puddle of sea slug cereal. Gary glanced over at me and gave me the
shhhhh!
sign.
“Yo ho ho! This sure is some good slop,” Aaron said, shoveling his mouth full of the gruesome grub.
“Aye!” Vicky said, slurping up another spoonful. Most of the time, Vicky and Aaron argued about everything. But they agreed when it came to their family recipe.
Just then, Rotten Tooth stormed into the mess hall. Rotten Tooth was not only the ugliest pirate on the
Sea Rat
, he was also the meanest
.
He had green hair and green teeth and mostly yelled a lot. Plus he was our teacher, and he didn't like us one bit. But I'd never been happier to see him!
“Arrr! What are ye lazy sprogs doing in here?” he growled. “Ye be late for Pirate School!”
“Avast, we were just finishing,” I said.
“Ye better be! Any pirate not on deck in the shake of a whale's tail will be on kitchen duty,” Rotten Tooth warned. He looked around and saw the slop spilled all over the place. Then he sniffed and made a face like we do when we smell his breath. “Arrr! And by the stink of it, kitchen duty is about the worst place on the ship today.”
I sprang up from my seat and tossed my bowl onto the pile of other dirty dishes. I wasn't going to miss my only chance to get out of eating the rest of my breakfast. 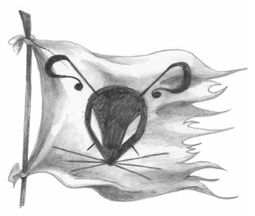 Eve: In the Beginning by H. B. Moore, Heather B. Moore
One Bright Star to Guide Them by John C. Wright
The Adultress by Philippa Carr
Change Of Season by Dillon, A.C.
Lady of Lincoln by Ann Barker
Out of The Box Regifted by Jennifer Theriot
Miracle at the Plate by Matt Christopher
Matters of the Heart by Rosemary Smith
Menos que cero by Bret Easton Ellis
Impending Reprisals by Jolyn Palliata