BOOK: Attack on the High Seas!
>>DOWNLOAD HERE >>READ ONLINE NOW
ads
Chapter 6
Attack!
BOOM! BOOM! BOOM!
The cannons shook the whole entire ship. It was scarier than the worst storm I ever sailed through. Inna and Gary were hiding under a blanket. And after another
BOOM
went off, I quickly climbed under the blanket with them.
“I'm right behind you,” Vicky yelled, and dove headfirst next to me under the blanket.
“Arrr! You guys are a bunch of scallywags!” Aaron bellowed. He still had his face pressed up to the window. “If Rotten Tooth had taught us how to swashbuckle, I'd be up there right now.”
I peeked my head out. Aaron started jumping from bunk to bunk, swinging a rope around in the air. But then a giant blast rocked the
Sea Rat so
hard that it knocked Aaron to the floor.
In a flash, he was right next to Vicky, hiding with the rest of us.
“I thought you said we were scallywags?” Vicky asked.
Aaron shrugged his shoulders. “So, maybe I was wrong,” he said. Even though Aaron liked to be a show-off, most of the time he admitted when he was wrong. This was definitely one of those times.
We could see the smoke outside our window.
We could hear the rival pirates board our ship.
We knew our ship was losing the fight.
“What are we going to do?” Vicky asked. “The crew of the
Filthy Sails
is going to take all of our treasure!”
“Arrr! They won't take my necklace,” Inna said, covering it with both hands.
“Even worse, they'll sink our ship! We can't let that happen,” I said. Even though we were afraid, our ship was in danger. “We have to pull together and save the day.” 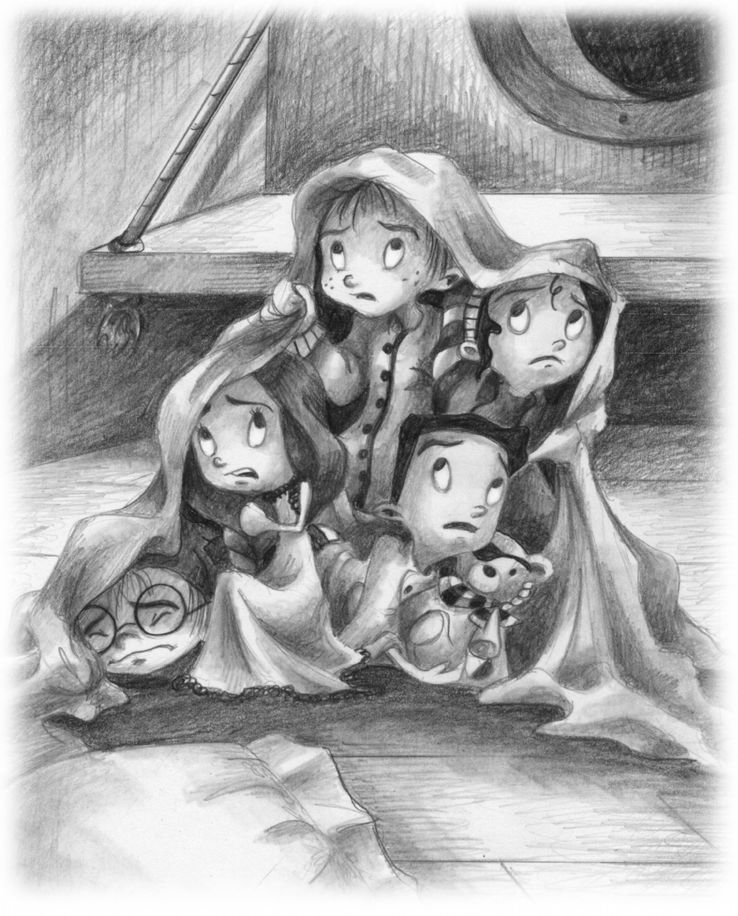 “Aye aye!” Vicky said. “But what can we do?”
“We need a plan,” Inna said.
“Aye, that's a good plan,” Gary told her.
“Aye,” Vicky agreed. “But what is the plan going to be?”
We all shrugged.
Then we thought as hard as we could.
I reached my hand under my pirate hat and scratched my head. Then I rolled my eyes back to search for a plan in my brain. That's when I remembered a story a pirate from the last ship I lived on had told me. It was about how he'd helped save that ship.
“ARRR! That's it!” I said. Then I told my friends the story about that ship being attacked. “Some of the pirates hid belowdecks in case the ship was overtaken. And then they snuck around and freed the crew. After that,
WHAM
! A surprise attack!”
“Arrr! Then what are we waiting for? Let's go, buckoes!” Aaron said.
We threw the blanket off our heads and snuck toward the door. It was up to us to save the
Sea Rat
once again. 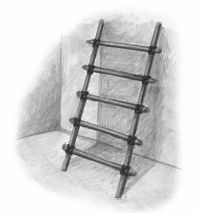 Chapter 7
Sneaky Sea Dogs
The door creaked open. I looked around to make sure the coast was clear.
“C'mon, mates, let's go,” I whispered to my friends. Then we tippy-toed through the hallway. We knew a secret way to get on deck. Down the hall was a hatch with a ladder that went up to the back of the ship. That's where we were headed.
When we got to the door, I heard a loud rumble.
I stopped dead in my tracks.
“What was that?” I whispered.
Gary looked down and put both hands on his stomach. “That was my tummy,” he whispered back. “I'm starving.”
“Aye, me too,” Inna whispered.
“Me three,” Vicky said.
Then my tummy rumbled, too.
“Lucky for you mates, I've got some sea slugs in my pocket,” Aaron said. He reached into his pocket and pulled out a handful of slimy slugs.
Gary's face turned greenish. Inna held her nose. I did the same. Suddenly, we weren't so hungry anymore.
“Maybe later,” we said.
“Suit yourself,” Aaron said. Then he and Vicky gobbled up the creepy critters.
Once we snuck our way to the hatch, there was one little problem. The ladder wasn't there and none of us could reach the handle. “I can reach it if I climb on your shoulders,” Vicky told me.
“Good idea,” I said. Then Aaron helped Vicky climb on my shoulders. But we still couldn't reach. “We need someone to climb on Vicky's shoulders, too,” I said.
“I vote for Gary,” Inna said. Inna didn't like climbing.
“Aye!” Aaron agreed. “And we can help him.”
Gary wasn't so sure. I could tell he was afraid he'd fall. “You can do it, Gary! The ship needs you,” I told him.
“Aye?” Gary asked.
“AYE!” we all said.
“Then I'll try my best,” he said. He took a deep breath and almost sneezed. But he pinched his nose just in time. After all, we were supposed to be sneaky.
With Aaron and Inna's help, Gary climbed on Vicky's shoulders. I felt my legs starting to shake. It was hard work holding them both.
“I got it!” Gary said when he grabbed the hatch handle. He was so excited that he lost his balance!
I wibbled and wobbled.
Then . . .
CRASH!
I fell to the floor. Then Vicky fell on top of me. I waited for Gary to fall, but he didn't. I looked up and he was still holding onto the handle. Then the hatch started to slide open.
Gary was hanging in the air. We could see the sky above him. “Arrr! What should I do?” he asked. 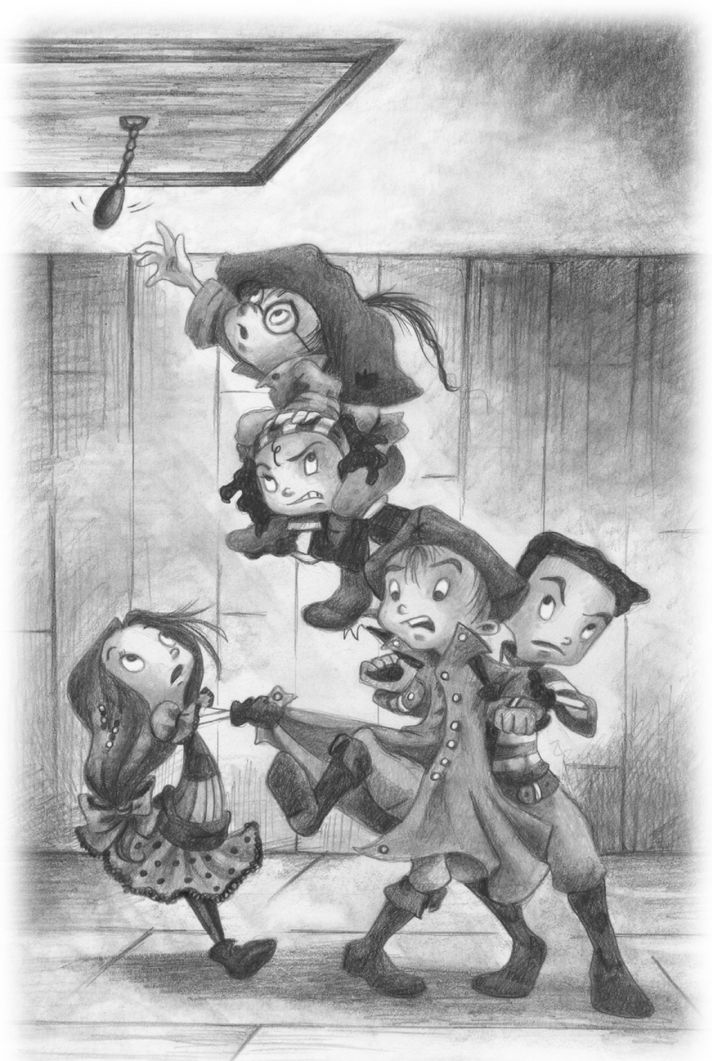 “Pull yourself up. Then lower a rope for us to climb,” I said.
“Aye aye!” Gary said. We watched him disappear. When he came back, he was holding a rope.
“Use one of the knots Rotten Tooth showed us to tie the rope to the ship's railing,” Inna whispered.
“Aye aye!” Gary said. The next thing we knew, he was lowering the rope down. We all took turns climbing up on deck and telling Gary what a good job he had done. Gary smiled really proudly. “I guess I'm not that clumsy when it counts,” he said.
“Aye,” I said, and gave him a pat on the back.
Then I looked around. We were all the way at the back of the ship, behind the main cabin. There were never any pirates here except Clegg. He was the oldest pirate on the ship, and he liked to fish back here. But I didn't even see him.
When I poked my head around the side of the cabin, I found the crew. They were tied to the masts, and the crew of the
Filthy Sails
was guarding them!
I took a deep breath. I knew I had to come up with a
really
good plan if we were going save the day once again! 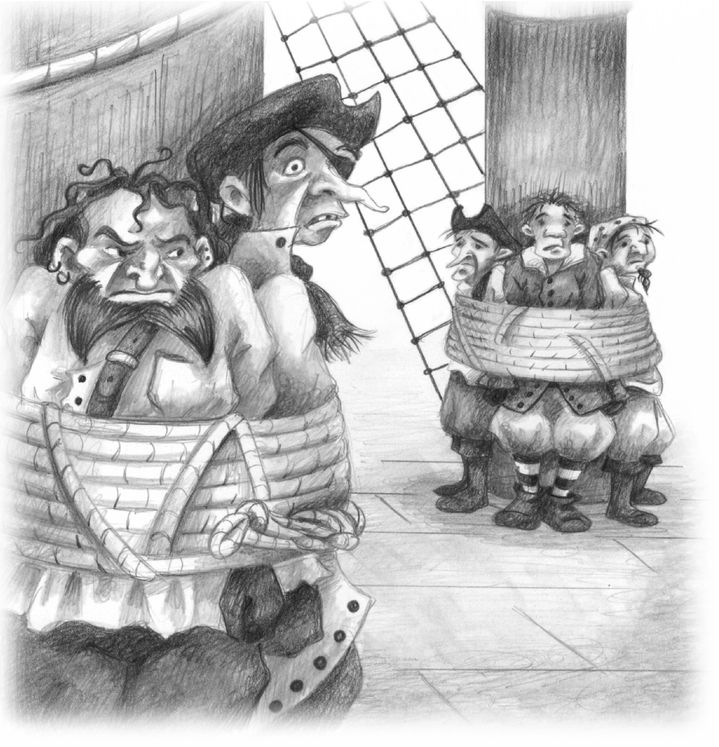 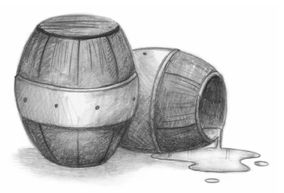 Chapter 8
Rotten Luck!
I watched Captain Fish Face pace the deck. “Arrr! Tell me where be the rest of the treasure or I'll sink this
Rat
to the bottom of the sea!” he demanded. His voice was even scarier than his face. It gave me the shivers just hearing him.
We had snuck over to the far side of the ship and were hiding behind a tall stack of barrels. “We need to do something quick!” I said, peeking through the tiny space between the barrels. “Or Fish Face is going to make the crew walk the plank.”
“Arrr! I say we run out there and toss Cap'n Fish Guts back into the sea,” Aaron said. He stood up and was about to run out. I had to grab his sleeve to hold him back.
“There's too many of them,” I said. I tried counting the pirates from the
Filthy Sails.
There were lots. I'm not sure exactly how many because I lost count at eleven. But I knew it was lots. “We need to set our shipmates free first.”
“But how are we going to get to them?” Vicky asked. “They're surrounded.”
Vicky was right. But no matter how hard I tried, I couldn't come up with a plan.
“Avast! I've got an idea,” Inna said. “First, we need a distraction. Someone has to get those stinky pirates' attention so the rest of us can untie the crew.” 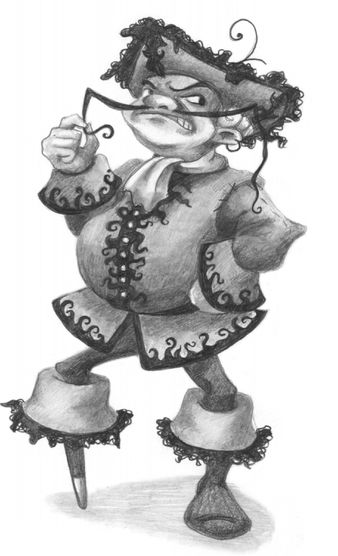 Aaron jumped up. “I'll do it,” he said. Then he started to swing his arms around like he was swashbuckling.
ADS
15.4Mb size Format: txt, pdf, ePub