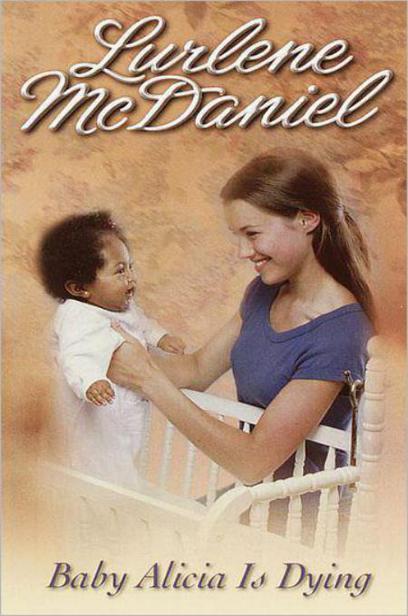 I would like to thank the staff and volunteers of Childkind, Atlanta, Georgia; Kim Hankins for her expertise; and Sandy Wilson Sommers, a friend
.

“The King will reply, ‘I tell you the truth, whatever you did for one of the least of these brothers of mine, you did for me.’ ”

All rights reserved. No part of this book may be reproduced or transmitted in any form or by any means, electronic or mechanical, including photocopying, recording, or by any information storage and retrieval system, without the written permission of the publisher, except where permitted by law. For information address Dell Laurel-Leaf.

Dell and Laurel are registered trademarks of Random House, Inc.

“You’re lucky, Val. I wish I was old enough to live away at college,” Desila Mitchell said with a sigh as she watched her older sister packing.

“Cheer up, Desi. This will be you in four more years. Then again, you’re so smart, it may take only three.”

Desi grimaced. She knew she had brains, but she felt ordinary and lacked her sister’s self-confidence. “Besides,” Val added, “I thought you were excited about being a freshman at Grady. Ninth grade will be fun.”

Desi hooked her arm around the post of her sister’s antique bed and shrugged. “It’s just that Grady’s so different and so big. I’ll bet half of Atlanta goes there.”

“Just the ‘cool’ half,” Val joked as she heaped sweaters into a steamer trunk. “Believe me, good old Grady isn’t so bad once you learn your way around.”

Desi knew it was easy for Val to shrug off her misgivings. Val had been especially popular during her four years at Grady High. “When will you come home again?” Desi asked.

“I have four days over Thanksgiving. Two weeks at Christmas.”

“But that’s months from now.”

“Just three. The University of Florida is only a day’s drive, you know. It’s not like I’ll be on another planet. You can write, and I might even answer,” Val said with a wink as she rummaged through her bureau drawer. “Have you seen my navy blue cardigan?”

“If you hadn’t landed that tennis scholarship, you would be starting at the community college and living at home.”

“If I weren’t on tennis scholarship, I doubt I’d be going to college at all, even though Mom and Dad wanted me to. You know I’m no scholar.” Val slammed one drawer and tore through another as she talked. “Mom!” she yelled. “Mom, can you come help me?” Val walked around Desi, saying, “You should find something fun to do. You know, Grady has lots of after-school stuff—”

“Forget it. I’m no good at sports, and I’ve never been a club person. The most I’ll do is my annual science fair project.” Desi had been entering science fairs ever since her first collection of insects had earned her a blue ribbon in third grade. She’d never been afraid of bugs or spiders; in fact she’d always felt more comfortable with four-legged creatures than with two-legged dolls. “Do you know what Corrine told me they’re doing for biology elective at Grady this year?”

“They’re making one big class by putting the smartest of us ninth graders in with the sophomores who flunked biology last year and have to repeat the course.”

“I love biology. I don’t want to be in with a bunch of rejects.”

“Sounds to me like you might get to help out some poor soul who couldn’t cut it,” Val replied sympathetically.

“I get to look forward to a symbiotic relationship with sophomore fungi!”

Val rolled her eyes, picked up her tennis racquet, plucked at the webbing as if it were a guitar, and sang, “Maybe you’ll find ‘love.’ ”

Desi burst out laughing. She was really going to miss her older sister.

“Did you want something, honey?” their mother asked as she came into the room, breathless from climbing the stairs.

“But we’re leaving for Florida in two days!”

“I plan to pick it up tomorrow.” Their mother turned to Desi. “Please don’t hang on the bedpost. You’ll work it loose.”

“Shouldn’t you be getting your clothes together for the start of school too?”

“I’ve got until Monday before classes begin. No rush.”

“Yes, but your father and I plan to stay in Gainesville during the week of freshman orientation, and you’ll be staying with Aunt Clare.” Mom touched the black cascade of Valerie’s hair, and Desi felt a twinge of envy. Their mother never seemed to touch her with the affection she showed Val. “Don’t you want to stay with her?”

“Sure I do! It’s just that it’s my first week of high school.”

And Valerie’s more important than I am
, Desi thought. Hadn’t it always been that way? Val first, Desi second. Pride over Val’s tennis accomplishments and nothing for Desi’s science achievements. Val’s beauty over Desi’s plainness.

“I
can
make it through orientation alone,” Val offered good-naturedly. “I
am
a big girl now.”

“We’ve had these plans for months,” Mom said. “Your father’s got another dentist covering his patients, and I don’t start working full-time until after Labor Day. No need to juggle the schedule. Aunt Clare can handle Desi’s needs for a week.”

“I give up!” Val announced in exasperation. “Deciding what to take and what to leave is impossible.”

Desi started to offer her help too, but her
mother and Valerie weren’t paying any attention to her.
They don’t need you
, she told herself. After a few moments she slipped quietly from the room, realizing that they didn’t even notice she’d gone.

“I’ve rented some movies for the weekend. Pick out one to watch while I go change. I’m so tired! Would you toss a bag of popcorn into the microwave?” Aunt Clare asked as she thrust open the door of her spacious town house. Desi lugged her suitcase inside.

“Let me stick my bag in my room first.” Desi headed to the room that was as familiar as her own bedroom. She shoved her suitcase into the closet, kicked off her sneakers, then went to the kitchen and found the popcorn.

Aunt Clare breezed into the kitchen minutes later. “I guess Valerie and your folks got off all right.”

“The minivan was jam-packed. Mom was making Dad and Val crazy, but they hit the road about ten this morning.”

Aunt Clare offered an understanding smile. “I know how Eva can be. She used to drive me crazy when we were growing up because she was such a perfectionist. But when you begin life as the prettiest girl in Athens, Georgia, become homecoming queen and tennis star extraordinaire, then marry the
cutest guy in the class—well, I guess it’s hard to contend with us common people.”

Desi felt that Aunt Clare was the only person in the world who understood her mother the way
she
did. “I’m not hitting on your mom, you understand,” her aunt added hastily. “But life has been generous with her. She grew up being treated like a princess and has had only one tragedy in all of her years on earth.”

“You mean when the baby died?” Desi felt more curious than remorseful about the incident. After all, it had happened before she was even born. Val had been two when the baby, a boy, had died at three months.

“I honestly didn’t think Eva was going to make it. There’s nothing sadder than sudden infant death syndrome.” Aunt Clare put bowls, napkins, and glasses onto bamboo lap trays while she spoke. “Fortunately, in all my years of nursing, I’ve only had to deal with two other cases. Parents put a perfectly normal baby down to sleep and hours later come back to find their baby is dead. SIDS is a terrible thing.”

Desi tried to imagine what it must have been like for her family. No one ever talked about the loss. It was as if the baby had never existed. “All I’ve ever heard is that Mom had a tough time. I wish I knew more about it,” Desi confided.

Aunt Clare stared off into space, her mouth set in a grim line. “There’s not much to know. Your
mother finally came out of it. After she had you, she took that interior decorating course, and her life seemed to get back on track. And then of course, with Val being so gifted in tennis—much as Eva had been—well, that gave her life new direction as well.”

Desi wanted to tell her aunt that to her way of thinking, “having her” had been a mistake. Her mother would have been far better off devoting herself to her part-time decorating job and managing Val’s tennis circuit. “Once Mom starts her job full-time,” Desi observed, “she’ll probably be even busier than she is now.”

“I know. I almost wish she wouldn’t.”

“Why?” Desi set the timer on the microwave. “You work full-time.”

“She still has
you
at home. She needs to give you the same amount of attention she’s given Valerie. That’s my opinion,” she said, flashing Desi a smile.

Even though Desi had often wished the same thing, she didn’t want her aunt criticizing her mother. “It’s no big deal, Aunt Clare. Val says I’ll be so busy with high school, I won’t even notice Mom and Dad are around.”

The timer went off, Aunt Clare removed and opened the bag, and the rich, buttery aroma of popped corn filled the kitchen. “I work because I don’t have a family and because I love nursing,” her aunt declared.

Aunt Clare had never married. Her fiancé, a medical resident, had been killed in a car accident, and she never allowed herself to fall in love again.