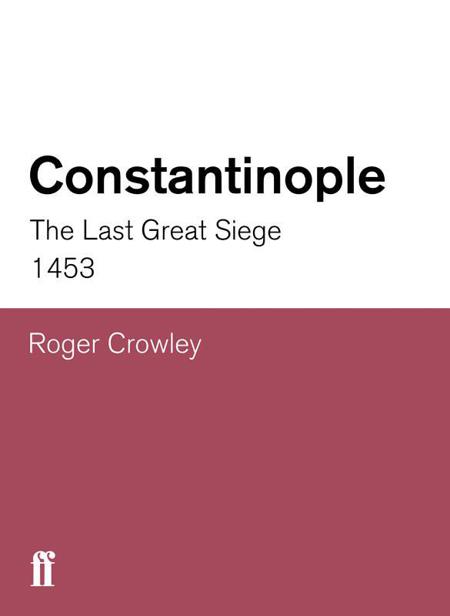 For Jan with love, wounded at the sea wall
in pursuit of the siege

Constantinople is a city larger than its renown proclaims. May God in his grace and generosity deign to make it the capital of Islam.
Hasan Ali Al-Harawi, twelfth-century Arab writer

I shall tell the story of the tremendous perils … of Constantinople, which I observed at close quarters with my own eyes.
Leonard of Chios

3
View of the nave of St Sophia

4
The imperial palace of Blachernae, from a nineteenth-century photograph

6
The great chain strung across the Golden Horn, from a nineteenth-century photograph

7
Bronze siege gun in the courtyard of the Military Museum, Istanbul (author’s photograph)

13
The Palace of the Despots, Mistra, Greece 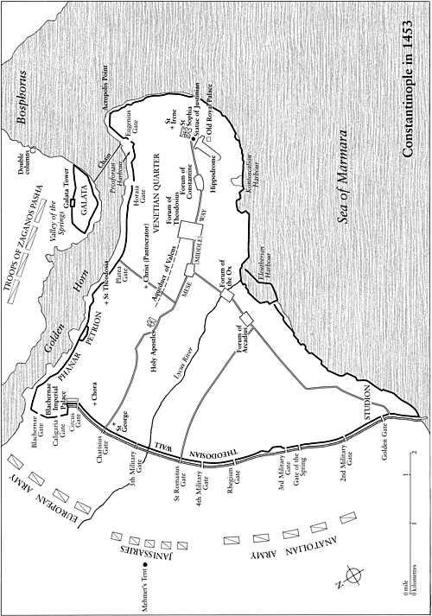 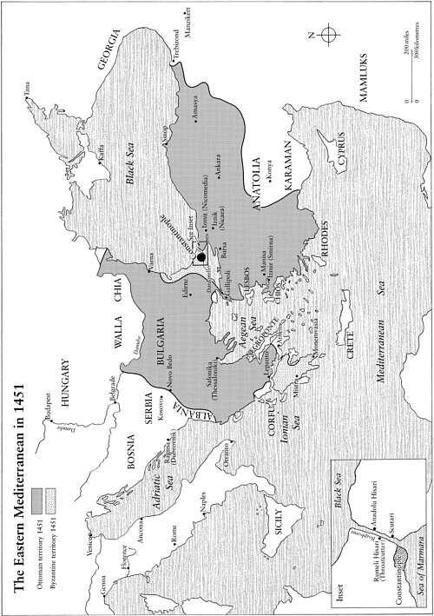 All references to authors relate to their books listed in the bibliography, and can be found at the end of each chapter.

Early spring. A black kite swings on the Istanbul wind. It turns lazy circles round the Suleymaniye mosque as if tethered to the minarets. From here it can survey a city of fifteen million people, watching the passing of days and centuries through imperturbable eyes.

When some ancestor of this bird circled Constantinople on a cold day in March 1453, the layout of the city would have been familiar, though far less cluttered. The site is remarkable, a rough triangle upturned slightly at its eastern point like an aggressive rhino’s horn and protected on two sides by sea. To the north lies the sheltered deep-water inlet of the Golden Horn; the south side is flanked by the Sea of Marmara that swells westward into the Mediterranean through the bottleneck of the Dardanelles. From the air one can pick out the steady, unbroken line of fortifications that guard these two seaward sides of the triangle and see how the sea currents rip past the tip of the rhino horn at seven knots: the city’s defences are natural as well as man made.

But it is the base of the triangle that is most extraordinary. A complex, triple collar of walls, studded with closely spaced towers and flanked by a formidable ditch, it stretches from the Horn to the Marmara and seals the city from attack. This is the thousand-year-old land wall of Theodosius, the most formidable defence in the medieval world. To the Ottoman Turks of the fourteenth and fifteenth centuries it was ‘a bone in the throat of Allah’– a psychological problem that taunted their ambitions and cramped their dreams of conquest. To Western Christendom it was the bulwark against Islam. It kept them secure from the Muslim world and made them complacent.

An imaginative view of the city in the fifteenth century. Galata is on the far right

Looking down on the scene in the spring of 1453 one would also be able to make out the fortified Genoese town of Galata, a tiny Italian city state on the far side of the Horn, and to see exactly where Europe ends. The Bosphorus divides the continents, cutting like a river through low wooded hills to the Black Sea. On the other side lies Asia Minor, Anatolia – in Greek literally the East. The snow-capped peaks of Mount Olympus glitter in the thin light sixty miles away.

Looking back into Europe, the terrain stretches out in gentler, undulating folds towards the Ottoman city of Edirne, 140 miles west. And it is in this landscape that the all-seeing eye would pick out something significant. Down the rough tracks that link the two cities, huge columns of men are marching; white caps and red turbans advance in clustered masses; bows, javelins, matchlocks and shields catch the low sun; squadrons of outriding cavalry kick up the mud as they pass; chain mail ripples and chinks. Behind come the lengthy baggage trains of mules, horses and camels with all the paraphernalia of warfare and the personnel who supply it – miners, cooks, gunsmiths, mullahs, carpenters and booty hunters. And further back something else still. Huge
teams of oxen and hundreds of men are hauling guns with immense difficulty over the soft ground. The whole Ottoman army is on the move.

The Nigger Factory by Gil Scott-Heron
Just What Kind of Mother Are You? by Paula Daly
Born of the Night by Sherrilyn Kenyon
After Dark by Gena Showalter
Daughter of Fu-Manchu by Sax Rohmer
Picture Perfect by Catherine Clark
Blue Rose In Chelsea by Devoy, Adriana
High Stakes Seduction by Lori Wilde
Holding Out For A Hero (The Five Sisters Series) by VA Browning
I'll Seize the Day Tomorrow by Jonathan Goldstein