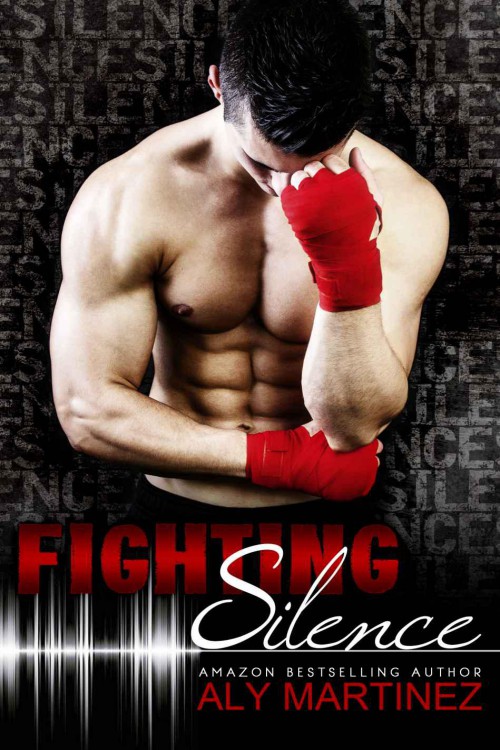 All rights reserved. No part of this novel may be reproduced, distributed, or transmitted without written permission from the author except for the use of brief quotations in a book review. This eBook is licensed for your personal enjoyment only. If you would like to share this book with others please purchase a copy for each person. This eBook may not be re-sold or given away to other people.

Fighting Silence is a work of fiction. All names, characters, places, and occurrences are the product of the author’s imagination. Any resemblance to any persons, living or dead, events, or locations is purely coincidental.

Edited by Mickey Reed at
I’m a Book Shark

Other Books by
Aly Martinez

The Wrecked and Ruined Series

“GET OUT OF THE CAR.” The cool, metal tip of a gun pressed against my temple.

“I don’t have any money,” I quickly announced, cautiously lifting my hands in the air.

“Get. The. Fuck. Out of the car!” a large, well-dressed man yelled manically before snatching the door to my truck open.

“Take whatever you want, man,” I said as I stepped out.

“Oh, I plan to. Where the fuck is my money?” He swung the butt of his gun toward my face, but he was too slow. It breezed past me as I ducked to the side.

The forward momentum sent him stumbling, and I made my move before he could recover his balance. I landed a hard fist to his face, but just as I followed it with a right hook, I heard the gun fire.

“Till!” my dad yelled from somewhere in the distance.

He needed to get the fuck out of there. We both did.

“He’s got a gun!” I warned as I scrambled after the man. I had no idea if I’d been shot already, but I knew for certain that I would be if I didn’t get the gun away from him.

I was able to knock him off his feet, but I wasn’t quick enough to keep him from regaining control of the weapon.

“Move one more goddamn inch and I swear I’ll it make your last,” he promised, aiming directly at my head from less than a foot away.

I had no choice but to still.

“Fuck!” he shouted, dabbing his mouth with his thumbs. The blood was pouring from his nose, but he simply wiped it on the back of his sleeve then shoved the gun against my chest. “Walk,” he ordered with a deep snarl, motioning to the dark warehouse.

“No,” I replied firmly. “I’m not going anywhere with you. Take my truck, my wallet, whatever you want.”

“You know what I want, motherfucker? My. Fucking. Money.”

“Bullshit!” He grabbed the back of my hair and shoved the gun under my chin. “That bag you stole from Clay Page belonged to me! Just give me the goddamn cash and you walk away without a hole in your fucking head.”

He was the only reason I was there in the first place. About an hour earlier, he’d called me for a ride home. He’d sounded desperate and offered me twenty bucks. I’d figured he was drunk, but with a gun pressing into my neck, it became blindingly obvious that I wasn’t just at the wrong place at the wrong time.

By my own father.

“I didn’t steal anything from him.”

“You don’t have to lie, Till. Just give Frankie the money,” my dad said, limping out of the warehouse. His face was badly beaten, and blood dripped from what appeared to be a gunshot wound to his leg.

My body stiffened at the sight, but so did Frankie’s fist in my hair.

“What the fuck are you talking about?” I growled at my dad. “You know I don’t have his money!”

He continued toward us until the gun was suddenly removed from my under my chin and leveled on him.

“Don’t come any closer, Clay. I will drop your ass right fucking there.”

Slowly, he stopped and lifted his hands in the air.

With a hard shove, I was pushed forward to join him on the wrong side of the weapon. It was then that I got my first real look at the triggerman.

An unusual dragon tattoo peeked out from under the sleeve of his dress shirt and continued onto the back of his hand. The green monster was breathing flames down each of his shaking fingers, and the gun waved unsteadily. His eyes were wide and glassy, flashing nervously between us. It was a cool night, but he was drenched in sweat. The guy was worse than just pissed off—he was strung out and unpredictable.

“Look, dude. I’ve got, like, two hundred bucks in my truck. Just take it.”

He tilted his head menacingly. “Two hundred bucks? Two. Hundred. Bucks? There was over forty thousand dollars in that fucking bag! And you want to give me two hundred?” He rushed forward, not stopping until his hand was around my throat and the gun planted firmly in the center of my forehead. “That’s not even a payment!” Spit flew from his mouth as he lost any sense of composure he had left.

He swung the gun back to my dad. “That true? I’m putting a fucking bullet in whichever one of you is lying to me.”

“No. He has it. I swear!” My father shouted his cowardly lie with such conviction that I almost believed him.

I’d always known that Clay Page was a piece of shit. I’d hated him since I was old enough realize what a manipulative snake he truly was. But against my better judgment, with only the promise of twenty bucks as incentive, I’d ultimately gotten myself into that situation by not trusting my gut.

And right then, my gut was screaming to stay true to what I had been doing since I’d entered the world eighteen years earlier. If I was going to die that night, I was going down
fighting.

Slamming my head forward, I head-butted Frankie squarely in the nose. The gun fired over my shoulder, but at that moment, I couldn’t have cared less about where the bullet lodged—and that included in Clay Page’s head.

It had taken only three punches to the face before he fell to the ground, dragging me down with him. I heard the gun skitter across the pavement, and before I landed on top of him, I had planted another fist to his mouth. His head cracked hard against the concrete, but I didn’t let it deter me. He eventually stopped fighting back, but the only thing that snapped me out of it was the sound of sirens in the distance.

I stood up, covered in blood, and headed back to my truck. I spared one glance over my shoulder for the man who had brought me there that night. He was holding his stomach and rolling on the ground. He’d made it obvious that he didn’t care about me. And as I walked away, I was all too willing to return the favor.

After I’d hoisted myself back into the cab, my truck drove itself down the familiar roads. My father’s betrayal filtered through my brain with every turn. I had no idea where I was headed; after that night, I didn’t belong anywhere.

I hated my life and all that it was—but especially what it wasn’t.

God had already damned me to a future that would gradually fall silent. Teasing me with the present and taunting me with everything I would eventually lose. Even before my own fucking father had been willing to sign my death warrant just to save his own hide, I had already been drowning in the ocean of life. Every gasp of air was a struggle. Just as I would breach the surface, filling my lungs with hope and determination to make it through another day, I was forced back under—harder every time.

There was only one place where the world didn’t suck the life out of me. Regardless of how long I was there, seconds or hours, it offered me a reprieve and recharged my will.

I wanted to go
home.

But home wasn’t where I laid my head every night. I didn’t actually live there at all, but it was the only place I felt alive. What I needed was the dream that only existed inside those four walls.