Complete your journey with an excerpt from 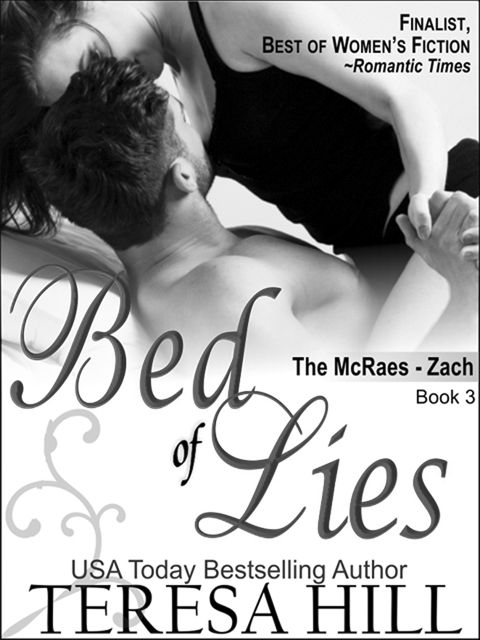 She was standing in the foyer of the most elegant restaurant in town—Steve's arm resting lightly at her back, her future in-laws by her side, her new life firmly in place—when she saw him.

Customers were heading in and out of the front doors, clustering at the hostess stand, heading off to their tables, everyone going every which way at once, while she stood frozen in place.

There he was, Zach McRae in the flesh.

All grown up and absolutely perfect, as she'd always known he would be one day.

There was a quick rush of pleasure and surprise at first. She'd always liked him so much. And for a moment it was as if Julie Morrison's life were a movie playing out on the big screen and someone had just hit the pause button. No, as if they'd sent the tape in reverse. In an instant, she was seven years old again, scared, lost, and trying to hide in a quiet corner of his parents' house, wishing she never had to go home, him promising sincerely that his family would always be there for her. Young as he'd been at the time, he'd meant it, had kept that promise so many times over the years.

Zach turned, saw Julie, and walked right up to her, shoulders wide and squared, a too-familiar smile on his face—as if he'd last seen her yesterday, not more than eight years ago—and said, "Hello, Julie."

"Zach," she managed to say. "What are you doing here?"

What she really wanted to say was,
Please don't say another word. Please don't ruin anything.

"Business." He was still smiling. "And you? Is this where you disappeared to? Memphis?"

She laughed. What else was there to do? A part of her was surprised, maybe even hurt, that he'd recognized her so easily. She thought she'd come so far from that girl she used to be. Especially standing in the lobby of one of the finest restaurants in Memphis, a discreet, hopefully stylish, designer dress wrapped around her body. Steve's ring—a tasteful family heirloom passed down through the generations—on the third finger of her left hand.

And yet, at the same time, she realized there was a part of her that despite everything else, was immeasurably pleased that Zach had known her right away, even after all this time.

"You disappeared?" Steve asked as his arm tightened around her, bringing her back to the present.

She realized they were all looking at her, Zach and Steve, as well as Steve's parents. Both in their sixties, tastefully gray and discreetly looking of old Southern money, they'd never been happy at the prospect of welcoming her into their family. Somehow, they'd known she just didn't belong in a family like theirs.

Calm down,
Julie told herself. All she had to do was stay calm.
And get rid of him.
Stay right here in this carefully constructed world. It was hers now. No one could take it away.

"I'm so sorry," Julie said. "I was just surprised.... Steve, this is Zach McRae, an old friend of mine. Zach this is my fiancé, Steve Land, and his parents Barbara and Joe Land."

As they all shook hands, Julie couldn't help but notice that Zach, all grown up, was just as straight and tall and solid as she'd ever imagined he'd be. He had dark hair, thick and clipped short and neat, even darker eyes, a strong, determined jaw, a beautiful smile. A hint of strength and power emanated from him as he stood there in a perfectly tailored suit. The stamp of confidence and ease showed in every move he made, a kind heart in the way he'd always treated her.

"Yes," Zach said, not taking his eyes off her. "And neighbors."

"Oh?" Steve's mother sounded interested all of a sudden. "You're from St. Louis, too?"

And just like that, Julie felt the treacherous ground she was standing on shift this way and that.

Julie jumped in, begging him with her eyes to just let it be. "He used to be. It's been ages since we've seen each other." She smiled up at Steve in the end. He wasn't going anywhere. He wanted to marry her, after all. Then she turned to Zach and uttered a bold-faced lie. "And your family moved to... Where was it, Zach? Ohio?"

He took a breath, his jaw tightening. She could just imagine what was running through his head.
Just like old times, huh Julie?

Years ago, he wouldn't have hesitated to call her on a lie. He'd always thought she could be better than she was. She held her breath, waiting....

"Yes." He finally nodded, staring at her. "I'm surprised you remember."

All the lies
, he meant.

She hung her head, realizing he had the power to shame her, even now.

"And you two know each other because...?" Steve asked.

"Julie and my little sister Grace were inseparable for years when they were younger," Zach explained. "I'm sure she'd love to hear from you. In fact..."

He slipped a hand into the inside front pocket of his jacket and pulled out a small, silver case. Taking a business card out of it, he scribbled something on the back, then gave it to her.

"Do that, Julie. Give her a call." His look practically dared her not to.

Or what? He'd track her down? Not that it would be difficult. She'd never bothered to change her name. At the time she'd been tempted, she hadn't had the money, and once she had it, she realized she hadn't left anyone behind who'd care enough to come looking for her.

She took the card, promising to call.

The hostess, sleek and elegant in a slim, black floor-length skirt and a crisp white blouse, joined them, nodding respectfully to Steve's father. "Your table's ready, Mr. Land."

"Yes. I was supposed to have dinner with a colleague, but he got tied up at the last minute. I decided to come anyway and try it on my own."

"Well, we can't have you eating dinner all alone. Why don't you join us? We've met so few of Julie's friends, and with her not having any family left..."

Zach gave Julie another one of those looks. "I'd love to join you. If that's all right with everyone."

Barbara Land looked gleeful, as if she'd read between every line and knew Julie was hiding something and that Zach might well be the key. Steve gave Julie an odd look, his arm tightening once again at her waist. She could feel all those not-so-subtle male signals rolling off him.
Hands off. She's mine.
As if Zach had ever seen her as anything but a lost little girl or a reckless teenager.

Blood Deep by Sharon Page
As Far as You Can Go by Julian Mitchell
Spellfire by Jessica Andersen
Hidden Depths by Hunter, Aubrianna
The Sojourn by Andrew Krivak
Finding Gary (The Romanovsky Brothers Book 4) by Burns, Trevion
Devil to the Belt (v1.1) by C. J. Cherryh
Collected Poems by Sillitoe, Alan;
Ties That Bind by Natalie R. Collins
The Rebel Spy by J. T. Edson