Harry Lee was taking his family away from Stratford, the great brick house of the Lees.

After the Revolution, things had been hard for Light Horse Harry. The famous soldier had tried to make money. But he had lost the money he had. He had even been sent to jail because he could not pay back money he had borrowed.

And so there had been bad days at Stratford after Robert E. Lee was born. No one farmed the land. Few friends visited.

Now the Lees had to leave. It cost too much to live in the big house.

It was hard to leave. Stratford was one of the finest houses in Virginia. Lees had lived there for almost 100 years. In one room both the Lees who signed the Declaration of Independence had been born. And in 1807, Robert E. Lee had been born in that same room.

Harry Lee had to leave Stratford. But he could not leave Virginia. He loved his state. Once he had said, “Virginia is my country.”

So the family moved to Alexandria, a small town of brick houses in Virginia. It was near Washington, the new capital of the United States.

But Light Horse Harry could not stay long. Things went wrong again.
One of his friends was attacked by a mob. Harry tried to help and was badly hurt. He almost died. The American government sent the old hero to a far-off island to get well. But he never did. And he never saw his family again. He died a few years later on his way home to Virginia.

Mrs. Lee and the children lived in a small house now. But Robert was happy. There was green Virginia country all around. Robert could ride and hunt, or swim in the river.

When Robert was 13, Charles went to work and Smith joined the Navy. Now Robert was head of the family. He had to take care of his mother and sisters.

Mrs. Lee was often sick. Robert took care of her after school. Often he carried her to her coach. The Lee’s Negro coachman, Nat, would drive them around Alexandria.

Many things in the town made Robert think of his father and the Revolution. He went to the church George Washington had gone to. People told stories about George Washington and Light Horse Harry in the war. Robert heard about Washington’s funeral.

Light Horse Harry had spoken there. He had said Washington was “First in war, first in peace, first in the hearts of his countrymen.”

Robert wanted to be like his father and the great Washington.

Robert decided to go to West Point, the United States Military Academy. After four years there he would be an army officer. And West Point was free. This would help the Lees. They had very little money.

But it was hard to get into West Point. Robert worked hard. People sent letters to the government. They said he should go. His teacher called him a fine student and a gentleman. Robert got in. 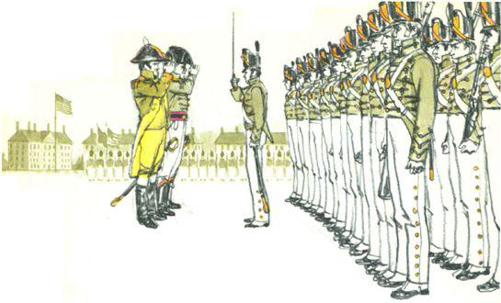 Many young soldiers in fine uniforms stood in long rows. A famous French general had come to see the cadets at West Point.

It was July, 1825. Robert E. Lee had come to the Academy just a month before. Today he was in dress uniform for the first time.

It was an exciting day for Robert. The famous Frenchman was General Lafayette. He had fought in the American Revolution. He had helped George Washington and Light Horse Harry beat the English.

Robert had already met Lafayette. A few months before, the great man had visited Alexandria. After a big celebration he had called on the Lees. Robert was very proud.

Now Robert was at West Point to learn to be a soldier like Lafayette.

West Point was in New York. It was a beautiful place on the Hudson River. But life was hard for the cadets. The buildings were old and uncomfortable. The work was hard.

Cadet Lee got up at dawn. He had to study all morning and march on the parade field after lunch. But he liked to work. He found science and drawing fun. He even liked to march. The life of a soldier pleased him.

In two years Robert was allowed to go home and visit his mother. He was sad to find her very sick. But it was good to be home. He was glad to see his old friends again.

The last two years at the Academy were the hardest. Robert’s class started with 87 boys in it. Only half finished. Robert did very well. Just one cadet got better marks. And he and Robert were chosen to lead all the cadets at West Point.

When Robert was 21 he graduated from West Point and came home. He was an engineer in the Army now. His work was building forts.

Mrs. Lee was very, very sick. Robert gave her medicine and sat by her bed. But before long she died.

Robert was sad. He would miss his mother very much.

After Mrs. Lee died, her coachman, Nat, had nowhere to go. He was old and sick. Robert wanted to help him. When the Army sent Robert to build a fort in Georgia, he took Nat with him. The warm weather would help the old man get better. 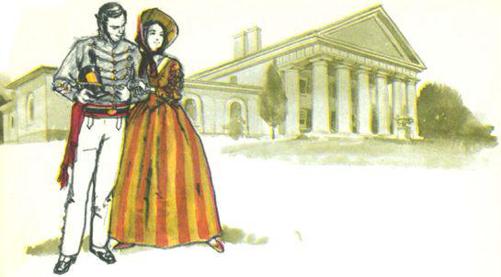 When Robert could get away from Georgia, he often visited Arlington.

Before long, Robert asked Mary to marry him. Mr. Custis was a rich man. He was not sure his only child should marry a poor army officer. But Mary wanted to marry Robert. At last her father agreed. On a rainy day in 1831, Robert E. Lee married Mary Custis at Arlington.

The Army had given Robert a new job. He had to work at Fort Monroe, in Hampton Roads, Virginia. Robert and Mary went to live there.

Then soldiers from Fort Monroe were sent out to get them. Almost 100 black people were killed. Many of them had done nothing.

Turner had been angry at white men for making black men slaves.

Many Negroes had been brought from Africa to be slaves in the South. They were made to work in the fields. They had to work in white people’s houses without pay.

Some white people were cruel to slaves. People like the Lees took good care of them. But no slave had a good life. It was a terrible thing to be owned by another man.

But Robert E. Lee did not like to think about this kind of thing. He was a soldier. And soon he would be a father. To him the important things were his duty to the Army and his duty to his family.

The Army sent Robert to work in Washington. Now the Lees could live at Arlington. Robert often had to be away. But he was always glad to come home to his growing family. In these years the Lees had seven children.

Robert E. Lee was a soldier, but he had never fought a battle. Then in 1846 war broke out between Mexico and the United States. Lee was sent to fight. He said good-by to Mary and the children. He was off to war. 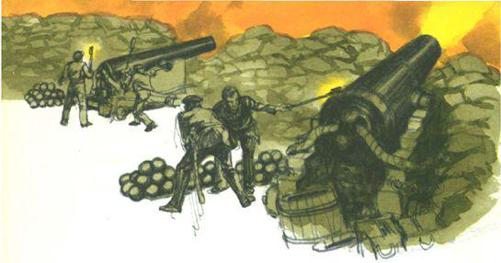 The big guns were ready. Captain Robert E. Lee had told the soldiers where to put them. He had made the men dig banks of dirt to hide behind.

Lee was helping General Winfield Scott plan a great battle. The Army was about to attack Vera Cruz, a large Mexican town on the sea.

The attack began. Soldiers fired the great guns at the walls of Vera Cruz. One of the men at the guns was Robert’s brother, Smith Lee. When he could, Lee went to stand by his brother’s gun. “I could see his white teeth through all the smoke of the fire,” Lee said in a letter to Mary.

The Mexicans soon gave up Vera Cruz. General Scott thanked Lee for his work. Now the Army could move on to the Mexican capital.

The march to Mexico City would be hard. General Scott asked Lee to find the best way to go. And he asked him to see what Santa Anna, the Mexican general, was doing. 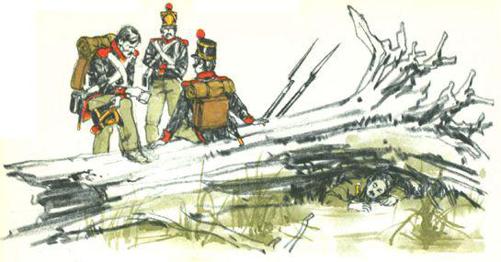 To get news for Scott, Lee went behind the lines of enemy soldiers. This was dangerous work.

Once when Lee was behind enemy lines he heard voices. Mexican soldiers were coming to drink at a spring! Lee jumped under a log. More Mexicans came. They sat on the log and talked. Lee had to hide there until dark.

Lee found out many things for Scott. Once he even found a secret road for the Army. And he was very brave. At Cerro Gordo he led the first line of men into battle. The Americans won. But Lee wrote to his son, Custis, “You have no idea what a horrible sight a field of battle is.”

Then came the biggest battle of the war. The Americans attacked a fort outside Mexico City. Lee planned the attack. For days he worked without sleep. He found out where the Mexican soldiers were. He knew where to put the big guns. It was easy for the Army to take the fort. The American Army marched right into Mexico City. The war was over!