Read I Am Automaton: A Military Science Fiction Novel Online

I Am Automaton: A Military Science Fiction Novel 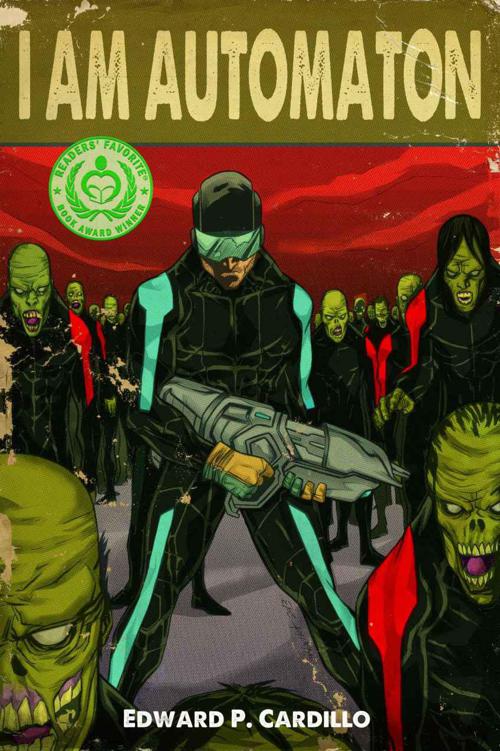 In memory of my mother, Terry, who passed away suddenly, leaving
behind a rich legacy of love and kindness.
Part I

Command Sergeant Major Peter Birdsall and his squad of ten were baking in a beat-up, unmarked van parked on the street. The men were hot, sweaty, and growing antsy.

They were all recovering from the night on pass cut short. They were a tight squad. Their motto was the squad that fights together
, raises hell together, and last night they didn’t disappoint.

They were not supposed to deploy today, but
apparently, the brass had received some new intelligence that made it imperative that they mobilize.

It was almost time. The sun was beginning to rise and bathe the cesspool of a town in golden light, purging the sins of the night prior.

The only remaining illumination was that of the holo-panels on parked cars flashing ads for Mexican beer and strip clubs. The cars were obsolescent models, the first generation of electric. The United States was already in its third generation.

Soon the streets would be bustling with people. If they were going to maintain a low profile, they had to move now. Peter cleared his throat.

He was consulting his Mini-com Multi-tasker. Only the size of a pack of gum, it projected a screen that was flashing information.

“Alright, listen up. Intel says that some major players in the Navajas gang are staying in the second floor apartment across the street. There are reported to be only three of them, high ranking members, maybe even a capo, so this is going to be a simple smash-and-grab.”

There was backslapping, high-fiving, and a flurry of macho remarks. Peter put his hand up. They listened.

“But keep in mind that our Special Forces were down here not long ago training the Navajas to help the Mexican government in the war on drug cartels.
Unfortunately, these Navajas realized that they could make more money using their new training as security for the cartels, and then eventually they became the cartels.

“These are not debutants. They know our tricks, they know our tactics, and they’re sure as shit going to use them against us.”

“Yeah, well, we’ve learned a few things since then. They haven’t tasted army tough yet.”

The other men hooted and hollered in support. They sounded like a football team in the locker room before the championship game.

Peter raised his hand again, half in recognition of Apone’s sentiment, and half to impress upon his men his point.

“While that is true, these Navajas are not to be underestimated. So listen up. We need to cross the street fast while keeping an eye all round us. Squad Vee formation. Once we breach the building through the front, we switch to two fire teams in squad column formation and take the second floor.”
Corporal Apone nodded, and the men grunted in affirmation.

“Remember your training, because it is that very training that will keep you alive. This ain’t amateur hour, and it’s no time for mistakes. Am I clear?”

A bead of sweat ran down the side of Peter’s cheek. He checked his watch. He then extended his hand vertically and pointed in each direction. The men dispersed out of their van, covering each other, and proceeded across the street in
Vee formation, Peter leading and Apone bringing up the rear.

There was a light breeze, and a stray paper was blowing down the vacant street. In the
distance, a three-legged dog was watching them with lazy interest. But its attention quickly shifted to a dog biscuit ad flashing on the side of the nearest car.

They splashed through the filthy gutter as they approached the front door of the storefront.
Peter produced his Mini-com Multi-tasker and activated the lock pick application. He began working on the digital lock quickly, but quietly. It was an outdated algorithm, no challenge. The flanks were scanning the quiet street.

All was still. The prostitutes, criminals, and morally licentious were all sleeping off a wild night of drunken debauchery. The city almost seemed decent in the tranquility of morning.

Peter disarmed the lock with what seemed like a pop, but he realized quickly that digital locks don’t pop.

Two men on the right flank were dropped—Spottiswoode and Bertucci.

B
efore Peter could bark a command to switch formation, Allen on the left flank was dropped.

The men quickly rearranged into two fire teams, and Peter pushed into the building. He felt something graze his shoulder as he dove into the store.

It was some kind of a general store with aisles and shelves. The store was lit, digital sales and prices
were flashing on the walls and above the aisles, creating the effect of a consumerist discotheque.

Men filed
past him, and each fire team went down an aisle past rows of antibiotics and various controlled substances that were illegal in the States. His squad was yelling all around him, and there was yelling in Spanish from inside the store.

This was going all wrong. The Navajas knew they were coming.
Somehow, the bastards knew, and they were ready for them.

Before he could process the scene before him, his men were being cut down in the store by controlled gunfire. By being corralled into the
aisles, the Navajas were able to take them out two at a time.

Peter ran down the aisle behind Apone, and in
minutes, Navajas surrounded them on either side of the aisle with carbines. Apparently, they were putting the American weaponry they received to good use.

Peter had to make a snap decision. Fight or surrender?

“Throw your weapons down,” he ordered his men.

Apone looked back at his friend, multi-colored lights reflecting on his face. There was doubt in his expression. But Peter was in command. He placed his M-16 down to the floor slowly and put his hands on his head. The remaining three men followed suit.

One of the Navajas advanced and gestured with the barrel of his carbine for them to kneel. Peter nodded and they complied.

There was yelling in Spanish all around them. Before the situation got too out of
hand, Peter figured he’d try to communicate.

“We are United States Army. I am Sergeant
…”

The man with the carbine in his face told him to shut up. Peter’s Spanish was not the best, but he understood that much.

Apone looked at him nervously. Privates Wilson, Rodriguez, and Wilcox shifted nervously behind, but they remained silent, awaiting the lead of their sergeant.

The man with the carbine in Peter’s face was speaking rapidly in Spanish to another man, who then gestured for him to stand and come down the aisle.

“Rodriguez, you make anything of that?”

“They want you to go in the back while they watch us. They know we’re US Army.”

The man yelled for Rodriguez to be quiet, and then he gestured aggressively to Peter.

Peter stood slowly, his hands still on his head, sweat trickling down the side of his face, and began to follow the man. When he reached the end of the aisle, the man pointed for him to go into a back room.

Peter didn’t want to go. He was unarmed, and totally at the mercy of these Navajas. He knew what would happen if he went into the back room. Moreover, he knew what was going to happen to his men kneeling in the aisle.

Once again, he was at a decision point. He could try to fight back, but then he would probably lose and his men would surely be executed.
Nevertheless, if he complied, they were surely dead…most likely, anyway.

It was a judgment call, and Peter had no time to make it.

Peter turned and began to walk towards the door to the back room. He heard the swish of the man’s clothing and Apone yell his name when he felt a blunt object hit the back of his neck.

He went down hard, his face smashing into the tile floor spilling blood and shards of teeth onto an advertisement for aspirin.

He tasted copper as blood ran over his broken teeth before he blacked out.

Peter felt like he was floating in darkness as his head swam. When water splashed into his mouth, he realized that he was literally floating.

He screwed his eyes to clear his vision, and he was apparently in some kind of cave. As he looked forward, he saw the ceiling drop towards the water until the two met in the distance.

Suddenly Peter heard several loud splashes behind him, as if cinder blocks were being dropped into the water. He did not know why, but something inside him very urgently told him to move deeper into the cave, away from the splashes.

He began to wade deeper into the cave, the splashes echoing off the ceiling, and as he did
so, his feet left the ground and the ceiling was beginning to drop towards the water.

There was splashing behind him, but not the splashing of things dropping. Concentric ripples made their way towards him and splashed gently against his neck. Someone was in the water with him, and they were now wading towards him.

He swam farther and farther in. He could now see the guano on the ceiling and stalactites. The water was very cold from lack of direct sun exposure.

He pushed further into the cave until the rock ceiling was practically scraping the top of his head. In his haste, he was now swallowing water.

He closed his eyes and commanded himself to remain calm. His training told him that he had to assess the situation and evaluate his options. Panic was not one of them.

He opened his eyes and saw that there was no room to progress unless he went underwater. He would have to turn and face his pursuers if he was to get out of this cave.

Therefore,
he turned in the other direction and found himself gazing into blackness. He couldn’t even see a few feet in front of him.

The splashing stopped. Were his pursuers just treading water in darkness, waiting for his next move?

Hand-to-hand combat in deep water without oxygen was clumsy, but he was ready. Perhaps he would make it through the gauntlet by being evasive and just focusing on getting through rather than engaging.

He felt something bump against his foot.

He looked down into the black water, but he could not see beyond the surface.

He felt it again.

He began to kick his feet and swim forward when a hand wrapped itself tightly around his right ankle and began to pull him down.

Peter struggled against the grip to stay afloat, kicking wildly. A second hand wrapped itself tightly around his other ankle, and he was able to yell as he was being pulled under the water.

He grabbed frantically at his ankles and at the hands holding him, trying to pry them off, but the grip was unnatural.

Other hands began to reach out of the darkness and pull at his clothes and tear at his skin as he sank further into the dark void.

He knew he was going to die.

Peter woke with a start to darkness. He heard voices around him in Spanish. His hands were bound tightly in front of him with rope, and his own breath was hot against his face. He was sitting on hard wood, a chair of some kind.

Suddenly something was pulled from over his face, and light flooded his vision. As his eyes adjusted, he saw men kneeling in a row in front of him facing in the other direction…
his
men.