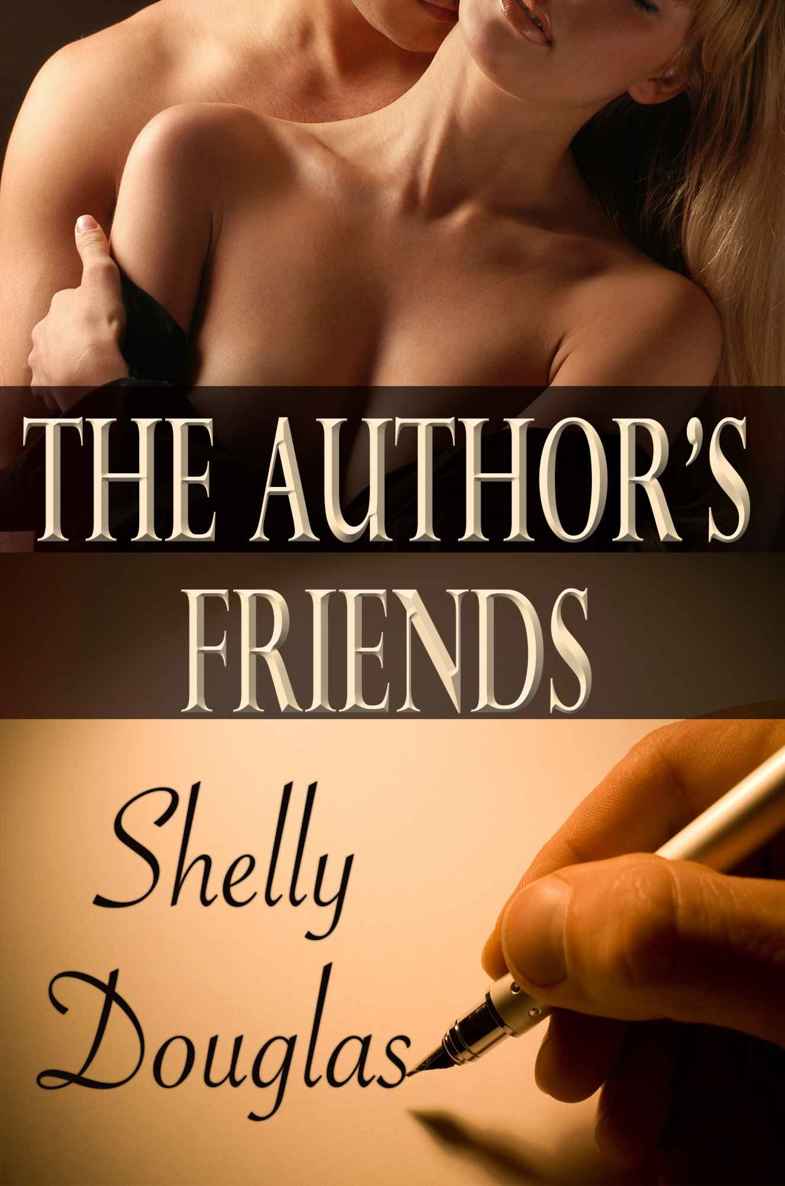 ©2014 by Blushing Books® and Shelly Douglas

This book is intended for
adults only
. Spanking and other sexual activities represented in this book are fantasies only, intended for adults. Nothing in this book should be interpreted as Blushing Books' or the author's advocating any non-consensual spanking activity or the spanking of minors.

Twas The Saturday Before Christmas

It’s Going To Be A Long Winter

Where Have All The Vanilla People Gone?

A Lick And A Promise

Inside The Bedford Bubble

One For The Books

What A Tangled Web

Michael Cohen and his girlfriend, Carla Campbell, drove quietly back home on snow-covered roads after visiting their friends, Dana and Richard McBride.  For the first time in many years, Dana had a desire to decorate for the holidays and asked her best friend to be a part of the festivities.  Unfortunately, Carla was not in a merry mindset that evening, and most of her comments had been sarcastic and biting.  Needless to say, her mood did not sit well with Michael.

“Are you going to speak to me, or am I going to get the silent treatment all the way home?” Carla’s arms were crossed and her tone was defiant.

Michael didn’t take his eyes off the road.  “If I were you, young lady, I wouldn’t try my patience any more than you already have.”

“I didn’t have a great day at the office.  Can my boyfriend, the therapist, ever cut me a break?”

“You know very well that Dana was looking forward to kicking off the Christmas holiday with us.  You couldn’t have put yourself in a pleasant mood for her sake?”  Michael parked the car and gently cupped Carla’s chin in his hand.

“Come on – lighten up, Mike. I apologized to her and Richard before we left.” Carla paused, her eyes wide. “Wait a minute … you’re going to punish me, aren’t you?”  They both knew the question was rhetorical as she looked into his warm, dark brown eyes.

“Let’s go in the house and talk.” He slowly disconnected his seatbelt, opened the car door and motioned for her to do the same.

Michael helped Carla remove her coat and hung it up in the closet.  “I’m going to sit in the den and take a deep breath.  You, on the other hand, are going upstairs to shed your clothes, including your panties, and change into a short nightgown.  Use the bathroom if you have to and brush your teeth because after your spanking  you will be going straight to bed.  Have I made myself clear?”

“What happened to
our talk
?” Carla asked snidely, placing both hands on her hips.

“Oh, we’re going to have that talk, my love … while you’re over my knee,” he answered calmly.  “You aren’t thinking of making it worse for yourself, are you?”

“No, sir.”  She ascended the stairs with her head down in an attempt to hide her rolling eyes and entered the bedroom, where she begrudgingly shed her clothes and panties.  As Michael rounded the corner upstairs, she quickly slipped into her white cotton nightie.

He walked into the room, shook his head and sat down next to her on the bed.

“Dana is your best friend, and you know how important this party was to her.  I understand you had issues at work today, but your insolent behavior tonight was unacceptable.  You acted like a brat all evening, and you know exactly how l will deal with such a disrespectful display.” His calm and steady voice was well-practiced.

Carla turned her head and sighed -  the perfect imitation of a bored teenager.

“You’re such an intelligent woman, yet it seems you aren’t processing important information today.  Maybe a new position will help you concentrate.”

She shrugged her shoulders.

Michael helped Carla get settled over his lap and smoothed the back of her nightgown.  Paying attention to detail, he pulled the fabric underneath so that it clung to the outline of her muscular, round bottom.

Without warning, he sharply smacked both cheeks several times, causing her to wince and jump with each contact before trying to escape his grasp.

“Stay in position Carla,” he said softly as he lifted the nightgown to expose her very pink behind.  “Since you asked for conversation … let’s have one, shall we?”  Each word was punctuated with a crisp, loud crack, similar to a toy cap gun being shot in an empty room.  “When you behave like a spoiled child, you will be taken over my knee and given a good spanking.  Is that clear, young lady?”  Michael’s hand continued to meet dead-on with her tender, bare bottom as his tone remained soft and even.

“You used language tonight - that I never,
ever
want to hear again.  Is that understood?”

“Excuse me?” His hand rested on her rosy backside.

“Push your bottom up, Carla.”

“Please, I’m sorry,” she wailed as she complied with his instructions, receiving two more smacks on the sensitive skin underneath each vibrant pink cheek.

“I just need to make sure you understand
why
you’re sorry.” He tenderly ran his hand through her thick, wavy blonde hair before twirling it around his fingers.

“I was a brat … and disrespectful to you and everyone else … and I’m sorry, Michael,” she sobbed and looked over her shoulder with teary eyes.

He smoothed his hand over her warm flesh, pulled her nightgown down. As he helped her up, he readjusted his crotch.  “Sit on my lap, sweetie.”

Carla cried in his arms and mumbled through her tears.  “I’m so sorry.  I won’t ever act like that again, I promise.”

“Good girl,” he whispered and kissed her on the top of her head.

Michael helped her off his lap and pulled back the soft down duvet.  “You will go straight to bed now, Carla.”  His demeanor remained gentle as he tucked her in and placed a kiss on her small, red nose.  “I’ll be up in a little while.”

Carla sniffed as she gently rolled onto her side.  He turned out the lights, sighed and closed the door.

In the dark room, a brilliant smile illuminated her tired face.

“Carla certainly was snippy this evening.”  Richard applied a playful swat to Dana’s rear with a kitchen towel as they exited the kitchen.

“She had a bad day at work.  Her office can be a real zoo, sometimes.” Dana quickly came to her friend’s defense.

“If you’d spoken to me in that tone, your nose would’ve been glued to the corner of our bedroom.” Richard pointed upstairs and raised an eyebrow.

“I wouldn’t want to be in her high heels right now.  The steam rising from the top of Michael’s head was pretty evident as they walked out the door.”  She paused.  “Richard, I’m still a little charged from this evening and want to work for a while, if you don’t mind.”

“Far be it from me to stop your creative juices.  But don’t stay up too late - I don’t want to have to deal with a cranky little girl tomorrow.”  Richard kissed Dana on the forehead, and he and Floyd climbed the stairs to their bedroom.

Dana closed the door to the den.  Usually, a novel of hers would wrap in ninety days, but having Richard around full time was a distraction.  She wasn’t complaining, though.  Their relationship had encouraged a whole new creative writing experience for her; now she penned books from experience, rather than fantasy.

Slender fingertips raced across the keyboard of the laptop, her mind was focused.

Bradley Caine moved to New York City right out of college and landed a job as a professional model.  Although he’d been blessed by an early success, modeling jobs were becoming less frequent as he reached the age of thirty.  Brad never had trouble attracting women, and his latest love interest who also made her living as a model, was just one in a long line of many girlfriends over the years.  As a Dominant man, he’d been having trouble finding just the right woman, which was why most of his affairs were short lived.

Kristin was different from many of the co-workers that he’d dated.  There was something mysterious about her.  She’d pushed back from his initial advance and, for the first time in his life, he had to be the one pursuing.

Dana struggled with the storyline.  Brad hadn’t revealed his dominance to Kristin and wondered if she, too, might be interested in his lifestyle.  It was important that he wait for the right moment.

Did she want them to play a game of cat and mouse or be honest with each other?  Dana stared at the screen.  What would her readers want?  There were so many e-books to choose from; she needed hers to stand out from the crowd.  Suddenly, she was startled.  Richard’s strong arms were lovingly wrapped around her.

“Dana, you need to get some sleep, darlin’.  You’ve been at this for a couple of hours.”

“Please, I’m about to have a breakthrough.  All I need is just a little more time.”

Richard shook his finger in warning as he walked away.  “I’m not going to argue with you.  But you know what a lack of sleep will do to you and how I’ll react.”

Dana returned to her laptop.

Brad asked Kristin to go away for the weekend.  He was surprised she’d agreed to go and decided to make a reservation quickly before she changed her mind.  Immediately, he rented a car to drive up to a bed and breakfast in Connecticut.  He had only requested one room, which was a bit presumptuous, but decided to cross that bridge when they got there.  Truthfully, he worried about how much of himself to reveal that weekend.  Would she accept him for who he was?  Why was he so intrigued by her?  He hoped that this trip would shed light on many questions that still needed answers.

Dana slowly closed up her laptop.  She wanted to sleep on what was about to happen next in her book.  The weekend at the B&B would be explosive.  She had an idea of where she was going, but liked to travel one chapter at a time.

As quiet as a Kitten, she slinked upstairs and undressed herself.  In minutes, she was in bed and snuggled up close to Richard.

“Do you have it all figured out?” he whispered as she rubbed her face on his cheek, inhaling her favorite scent.

“Mmm hmm, and someone’s life is about to take on an exciting new twist,” she purred in his ear.

He nibbled her neck and pulled her panties down caressing and teasing the smooth cleft of her ass.  His cock was rising quickly and scanned the area for attention.

“I have to wonder if you’re still worried about my
lack of sleep
, because your ‘friend’ doesn’t seem a bit concerned,” she teased as he spanked her sexy bottom in response.