Read Into the Deep 02 Out of the Shallows Online

Into the Deep 02 Out of the Shallows 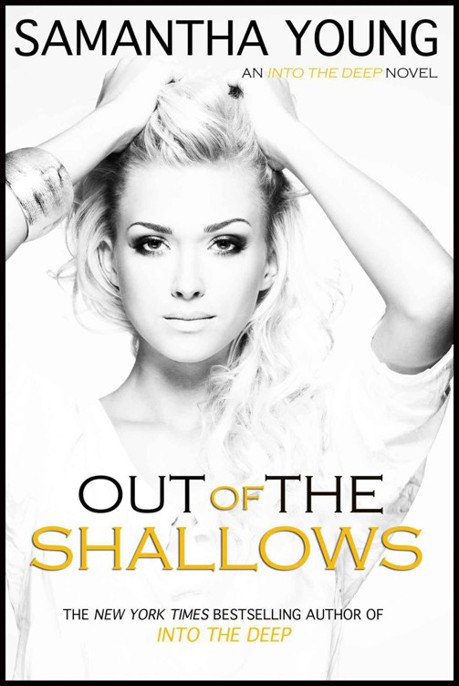 Out of the Shallows

Without limiting the rights under copyright reserved above, no part of this publication may be reproduced, stored in or introduced into a retrieval system, or transmitted, in any form, or by any means (electronic, mechanical, photocopying, recording or otherwise) without prior written permission of the above author of this book.

This is a work of fiction. Names, characters, places, and incidents are either the product of the author’s imagination or are used fictitiously. Any resemblance to actual events, locales, or persons, living or dead, is coincidental.

This work is registered with and protected by Copyright House.

Other Contemporary Novels by Samantha Young

Until Fountain Bridge (a novella)

The heady scent of flowers filled the room. These days it clung to everything. Even after I washed my hands a dozen times, they still smelled as if I’d doused them in floral perfume.

I turned from the arrangement of red roses and white lilies to find Claudia gesturing to it. I glanced back at the flowers. “I think I’m getting the hang of it. Finally.”

“It’s Hub’s. For his wife. Their fifteenth anniversary.”

Claudia nodded. “Heart of mush underneath that bear-like exterior, huh?”

I grinned. Hub owned the local diner in my small hometown of Lanton, Indiana. He was a huge guy with an even huger beard and gruff demeanor, and I could see why non-locals might find him slightly intimidating. But Claud was right. Hub was all heart. “He placed this order over a month ago. That is not a man who forgets his anniversary.”

My friend smiled and then gestured behind her into the store front of my mother’s florist shop. “I rearranged the shop window like you asked.”

Delia’s was the only florist in town, and although Lanton wasn’t huge, she kept fairly busy. She’d had a mold issue in the back room where I was working on floral arrangements, but after spending money my parents really couldn’t afford to spend to fix it, Delia’s was up and running again.

If only I could be one hundred percent positive that Delia, my actual mom, was up and running too.

“Thanks. If I don’t tell you enough, I really appreciate you being here.” Once Claudia had finished at the University of Edinburgh, she’d rushed back to the States, suitcase in tow, and moved in with my parents and me. She’d been here the whole summer, helping us out during one of the worst times of my family’s life.

“You can stop saying that now. I might have to hurt you if you don’t.”

Claudia frowned as she glanced around us. “Uh… where is Delia Mom, anyway?”

Mom was at the cemetery. It was becoming a regular hang out for her. I found myself hunching back over the arrangement as I murmured, “Where else?”

“Ah. Okay.” Claudia sighed. “So, Lowe called me this morning.”

“He says he’s tried calling you.”

Shrugging with more nonchalance than I felt, I said, “I know. I just… I haven’t spoken to Jake, so I don’t think it’s right if I speak to Lowe.”

“No, Lowe is Jake’s friend. I’ve hurt Jake enough without confiding in his friend when I won’t confide in him.”

I reached for more filler foliage. Claudia’s hand curled around mine, stopping me. “The arrangement is done.”

Turning to her, I said, “I get the feeling you want to talk.”

“Charley, school starts back up in a week. Are you ready?”

“We’re going back to the old apartment, and it’s senior year so we’ll have tons on our plates to keep us busy. You’ll get to see Alex again, too. This will be good.”

I looked away, worrying my lip between my teeth. After a moment of silence, I said softly, “Do you really think they’re okay for me to go? Mom still visits the cemetery every day and Dad… he’s still mad at me.”

Claudia’s eyes were filled with sympathy but I could also see determination in them. “Maybe Delia is still visiting the cemetery but that doesn’t mean she’s not good. She’s much better, Charley. She can cope on her own here now. And Jim… he loves you. He’ll come around when you come around.”

“Don’t,” I warned, definitely not wanting to walk into
that
territory.

She held her hands up in surrender. “I won’t. But are you ever planning on talking to Jake again?”

I glowered at her. “What is this? Piss-Off-Charley Day?”

“No, this is ‘It’s time to get back to normal and start facing up to the decisions you’ve made these last few months Day.’ Such as the one you made regarding a certain Jacob Caplin?”

A familiar pain sliced across my chest, but I refused to give into it. Instead I brushed past Claud to grab a broom and started on the back room floor. “Then no, I don’t plan on talking to Jake again. It’s over. We’re just going to leave it at that.”

Claudia inhaled sharply. “You’re just going to leave him hanging, wondering where it all went wrong?” She sounded horrified. Guilt crashed over me.

I shoved it forcefully aside. “We’ve hurt each other too much. How can we possibly come back from that?”

Whatever it is, I think people think I’m this fearless, brave, independent young woman who couldn’t give a shit what other people think.

I really couldn’t give a shit what
other
people think.

But I care what my parents think of me. And I’m afraid of losing them.

So not fearless. So not brave. And I guess not nearly as independent as I used to think I was.

When you’re a kid, your whole happiness is wrapped up in your parents. A hug from them, a kiss on the forehead, a piggyback ride, their laughter, their kind words, their affection, their love… it took away a hurt knee, or a classmate’s name-calling, or the death of a beloved pet. As long as I knew my parents loved me, that I made them proud, and that I had their respect, I’d been all right.

That feeling never really goes away, though. It’s amazing how easy it is for a parent to make you feel like a little kid all over again.

The God Class: The Third Nick Wolfe Sci Fi Adventure (Nick Wolfe Adventure Series Book 3) by Ross H Henderson
Don't Even Think About It by George Marshall
One Hundred Names by Cecelia Ahern
JUSTICE Is SERVED (Food Truck 7) by Chloe Kendrick
The Breakup Mix by Carter, TK
Infidelity for Beginners by Danny King
Delerium's Mistress: Tales of the Flat Earth Book 4 by Tanith Lee
Mist Over the Water by Alys Clare
One Good Turn by Chris Ryan
The Engagement by Hooper, Chloe