Mystery of the Mummy's Curse (3 page)

“Maybe she just likes mummies,” Benny said. “Like me.”

“She says she comes here all the time. So how come she's never seen the dinosaur bones?” Henry said.

“That is pretty strange,” Jessie agreed.

“But why would she lie?” Violet asked.

“I bet it has something to do with the Egyptian exhibit she's so curious about,” said Jessie.

“Well, I don't know about you guys, but I'm too hungry to worry about Lori Paulson,” Benny said. “Let's go home for dinner!”

The next day, the Aldens arrived before the museum opened, ready to work. The building was quiet and almost empty. As they walked down the long, dark hallway to the prep room for the Egyptian exhibit, their footsteps echoed on the hard floor.

A light was shining under the door of the prep room. When the Aldens pushed the door open, they were surprised to see not Sam or Pete, but Dr. Snood. He was standing up on the stepladder, peering down into the mummy's crate. He seemed to be deep in thought.

Dr. Snood looked up suddenly. He seemed startled, as if he'd been caught doing something he shouldn't. He quickly stepped down from the stepladder. “I was just ...”he began, but his voice trailed off.

“The mummy is really cool, isn't it?” Benny asked.

“It isn't
cool
,” Dr. Snood snapped. “It is a valuable artifact from four thousand years ago. You must never touch it, or any of the things in this exhibit. Do you understand?”

The Aldens were stunned. Benny was only being friendly. Why was Dr. Snood getting so angry?

Dr. Snood's eyesmoved quickly around the room, as if he were looking for something. Then, picking up his briefcase, he walked out without another word.

“I was just trying to be nice,” Benny said, looking after Dr. Snood.

“But I wonder why,” Jessie said. “Is it just that he doesn't like kids, or is something else bothering him?”

“Did you see how he was looking at the mummy when we came in?” Violet asked.

“And then he seemed so startled when he saw us,” Henry added. “As if he'd been doing something wrong.”

Before they could say any more, Pete came hurrying into the room. “Hi, kids!” he called out. “Sorry, I got stuck on a phone call. Have you been here long?”

“He didn't seem to be very happy to see us,” Jessie explained. She couldn't help but wonder why Dr. Snood was being so mean to them when they were only trying to help the museum.

“Pete, what's an âartifact'?” Benny asked, remembering one of the words Dr. Snood had used.

“An artifact is an object made by people a long time ago,” Pete answered. “Like all these pieces hereâthe cups, pots, toys, instruments, and sculptures. We can learn a lot about people who lived a long time ago by studying the things they left behind.”

“That makes all these objects very valuable,” said Pete. “They're importantâand they're also worth lots of money.”

“I know you will,” Pete said. “Now how about we get to work? We'll start by cleaning out the exhibit hall next door, where the exhibit will be set up for the public.”

The Aldens followed Pete through a side door into a much larger room. It was filled with glass display cases and cardboard boxes. Everything was covered in dust, and the paint on the walls was chipped and peeling.

“Hey, isn't that a model of the solar system?” Henry asked, pointing to a group of balls in different sizes hanging from the ceiling.

“And there are some photographs of the moon over there,” Violet added.

“The last exhibit in here was about outer space,” Pete explained.

“Well,” said Jessie, rolling up her sleeves, “where do we start?”

In no time, the Aldens were busy. Pete went through everything in the room, dividing it into things to save and things to throw away.

While they were working, Dr. Dickerson arrived, a big, straw bag over her shoulder and a briefcase in her other hand. “Cleaning up the exhibit hall?” she asked.

“Yes, and the Aldens are helping,” Pete said. “Since Tina is out and our cleaning crew can't do the extra work, the kids offered to help get the exhibit ready.”

The Aldens waited to hear what Dr. Dickerson would say. They were afraid she might not want their help.

“We're so glad you like the idea, Dr. Dickerson,” said Jessie. “We'll do a great job, I promise.”

“You can start by calling me Sam, like my friends do,” she said. Then she turned to Pete. “How does Dr. Snood feel about the children helping out? I imagine he wouldn't like the idea.” The corners of her mouth were curled up in a small, mysterious smile. 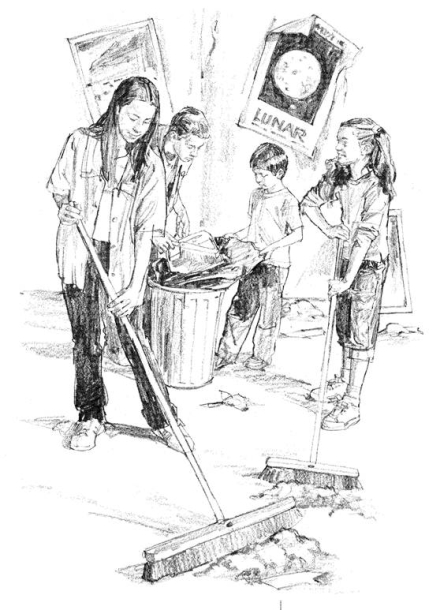 “He doesn't seem to like kids at all,” said Henry.

“You're right about that,” said Sam.

“But how would you know that?” Pete asked. “You haven't met Dr. Snood yet, have you?”

“Ohâno, I haven't. But I'm sure I'll meet him soon,” Dr. Dickerson said. She looked uncomfortable for a moment. “Anyway, I know how museum directors can be.”

“Well, he agreed to it when I told him last night,” Pete said. “I think it's because he knows we have no other choice.”

As the children were leaving the museum that evening, they heard a voice behind them. “Hey, Aldens!”

“What are you doing back here again?” she asked.

There was an awkward silence as the children wondered what to say. They didn't want to be rude, but they knew the details of the exhibit were a secret.

“We're helping with the new exhibit, but Pete told us not to talk about it,” said Henry at last, trying to sound firm.

His answer did not stop Lori from asking, “What's going to be in the exhibit? Did you see a mummy?”

“Actually, we haven't seen anything,” Violet said, surprising everyone. She was very shy and didn't usually say much to people she didn't know well. “We've just been cleaning out the exhibit hall upstairs.”

“So the exhibit will be upstairs?” Lori said. “And they must be preparing the pieces nearby ...” Now she seemed to be talking to herself, almost thinking aloud.

“We've got to get going,” Henry said.

“All right!” Lori said. “Thanks!” She seemed to have learned what she wanted to know. She headed off in the opposite direction.

“I hope we didn't just give away something we shouldn't have,” said Violet.

The next day, the children returned to the museum. Pete had other work to do, so he had told them to go right upstairs and get to work without him.

The Aldens came down the long, dark hallway. When they reached the exhibit hall, Jessie flipped on a light switch, filling the windowless room with light.

The Aldens carefully packed the last of the old outer space displays into boxes. They were so hard at work that the room remained eerily quiet.

Suddenly, Violet heard some footsteps in the hall. “That must be Sam or Pete,” she said, expecting someone to appear in the doorway at any moment. But a few minutes passed, and there was nothing but silence.

“I just heard footsteps in the hallway,” Violet said. She went to the door and looked down the long, dark hallway in both directions. There was nobody there.

“Maybe I was imagining it,” Violet said.

The children went back to work, and a few minutes later, the sound of footsteps returned. “Heyâdo you guys hear that?” Violet asked in a hushed voice.

Everyone listened, but the sounds in the hallway had stopped.

“What was it?” asked Jessie.

“I heard footsteps again,” Violet said, going to the door once more. But when she looked out in the hall, there was no one there.

“I heard something, too,” said Henry. He looked puzzled.

“What's the big deal?” asked Jessie. “Maybe there was someone in the hall, and whoever it was went into another room.”

“But there aren't any other rooms in this part of the museum,” Henry said. “Just this exhibit hall and the prep room. Why would someone be up here unless he or she was doing something with the Egypt exhibit?”

“Maybe it was Dr. Snood checking up on us,” said Benny.

“Or Lori Paulson,” suggested Henry. “She knows the exhibit's up here, and she seems awfully interested in it for some reason.”

Suddenly, Benny's eyes grew wide. “Or maybe it was the mummy!”

“Well, it would sound quiet if it walked,” Benny pointed out. “I mean, it's not wearing any shoes.” He stood up, closed his eyes, stuck his arms out stiffly, and pretended to walk like the mummy.

The children's laughter was interrupted by Sam's arrival. She walked briskly into the room, carrying a large, straw bag.

“Did you just get here?” Violet asked. “You weren't in the hallway a few minutes ago, were you?”

“You didn't see anybody out in the hall, did you?” Henry asked.

“Oh, nothing,” Henry said. “We just thought we heard someone a little while ago.”

“Really?” Sam looked concerned. “There shouldn't be anybody up here besides us.” Then she smiled. “Well, there's nobody there now,” Sam said. “I'm glad to see you're getting the room ready. I've got a lot of work to do myself.” Sam went into the prep room but came back out a moment later. “Have any of you been in the prep room this morning?” she asked. Her face was grim.

The children went into the prep room, curious about what was the matter. As soon as they stepped in the door they could see why Sam was upset. The papers on Sam's desk were no longer in neat piles; instead they were moved around, and some had slipped onto the floor. The artifacts, which had been lined up in orderly rows, were now scattered about all over the tables.

Sam sighed heavily. “When I left last night, everything was neat and organized.”

“You mean, someone came in and messed it up?” said Henry. “Who would do that?”

“Maybe that's what those footsteps were,” Violet said. “That might have been someone sneaking in here.”

“But you said you didn't see anyone, right?” said Sam.

“No, when I looked out no one was there,” Violet said.

Sam sighed again. “As if it isn't bad enough what happened to Tina, now this.”

“It's the mummy's curse again!” said Benny in a hushed voice.

“Oh, Benny, Pete was just joking about that,” Henry said.

“It will take me all day to get everything in order again,” said Sam.

“I can help,” Jessie suggested.

Sam smiled at her. “That would be great. And from now on, we all have to make sure this door is locked tight when we leave.”

Henry, Violet, and Benny went back to the exhibit hall to continue packing up the outer space exhibit. Meanwhile, Sam and Jessie sorted through the papers on Sam's desk and put them back in the correct order. When they'd finished that, they started reorganizing the artifacts.

“These artifacts are very valuable and very fragile,” said Sam. “So we must always be very careful when we touch them and always wear protective gloves.”

Jessie nodded. She was good at being careful. They slowly began to go through the scattered artifacts. Sam picked up each piece and read off the number written on the bottom. Jessie searched through the printed cards to find the information that went with it.

When Pete arrived at lunchtime, Henry and Violet had just taken the last two boxes to the storage room. “Wow!” he said when he entered. “You've done a terrific job! Now well have to do something about those walls.”