Mystery of the Mummy's Curse (5 page)

After Sam had left, Jessie went into the exhibit hall. She told the others about the missing flute and that it had never even been on the list.

“I can't believe someone has been stealing things from the exhibit,” Benny said.

“What's Sam going to do about it?” Henry asked.

“She went to talk to Pete, but she said we shouldn't say anything about it,” Jessie said.

“It would be bad publicity for the museum if people found out,” Jessie explained. “Sam figured Pete wouldn't want everyone to know.”

“I can't believe there's a list of items that isn't even accurate,” said Violet. “What good is that?”

“I have an idea,” Jessie said. “Let's make our own list. Then we'll be sure of everything that's thereâand we'll know if anything else disappears.”

“Benny and I will finish cleaning the display cases,” said Henry.

Going to her backpack, which she'd left by Sam's desk, Jessie pulled out a small, blue notebook and a pen. She had written her name on the inside cover, but other than that, the notebook was blank. Jessie flipped open to the first page and wrote at the top:
Enter the Mummy's Tomb
. “You look at the table and tell me the items, and I'll write them down,” Jessie said.

“Okay,” said Violet. “Two gold cat statues ...” she began. Slowly the girls worked their way around the tables, with Violet telling Jessie what was on each table, and Jessie writing the items in her notebook. She wrote down the name of the object and a short description so she'd remember what it was. It took a long time, but at last, they had an accurate list of everything that was there.

“What did Pete say?” Jessie asked.

“He wasn't in his office,” Sam said. “I'll have to catch him later.” She looked at Jessie's notebook, which Jessie was just closing up.

“What are you doing?” she asked.

“Since that list wasn't accurate, Violet and I decided to make our own,” Jessie said. She handed the notebook over for Sam to see. 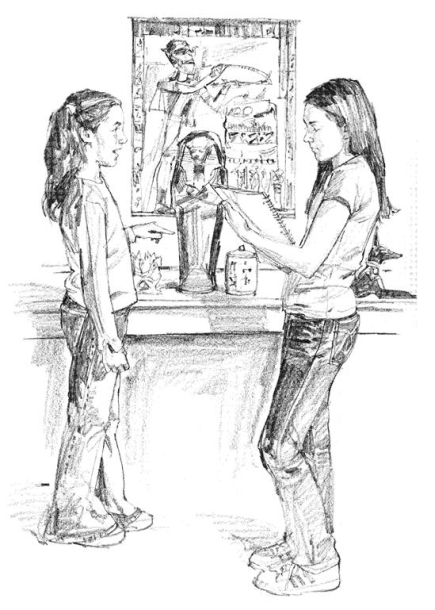 “What smart kids you are,” Sam said.

Just then they heard a deep voice in the next room. When they looked in, Pete was there talking with Henry and Benny.

“Hi, Pete,” Violet said as she and Jessie joined the others.

“I was just telling the boys how great it looks in here.” He walked around the room admiring the children's hard work. “Our regular cleaning and painting crews couldn't have done a better job.”

The kids knew that Sam was going to talk to Pete about the missing items. They wanted to stay and hear what he planned to do. But it was nearly dinnertime.

“See you tomorrow,” Henry called over his shoulder.

The next day, when the Aldens arrived at the museum, they found Sam carrying a large, framed picture into the exhibit hall.

“What's that?” Benny asked. The painting showed a group of Egyptian men and women. Their bodies were all turned sideways and looked stiff and angular. The edges of the painting under the glass were jagged and uneven.

“It's a painting on papyrus,” she said. “That's what the Egyptians used since they didn't have paper. Isn't it amazing how the colors have lasted for thousands of years?”

“How beautiful!” Violet said. She loved to paint and always enjoyed looking at artwork.

“These paintings really make the exhibit complete,” said Sam. “You see, the walls of the Egyptian tombs would have been covered with paintings depicting the dead person's life.”

“Did you talk to Pete last night about the missing pieces?” Jessie asked.

“Yes,” Sam said. “He's going to have new locks put on the doors and make sure the security guard comes by each night. We'll catch the thief.” She smiled at Jessie's concerned face. “Don't worry so much.”

“I just wish there was something I could do,” Jessie began.

“There is,” Sam said. “Help me hang these paintings.”

The children spent the rest of the morning working with Sam.

First, Sam selected two maps to be mounted on the wall. One was a map of the world, showing the country of Egypt on the continent of Africa.

“Egypt is on the other side of the world from our country,” said Violet.

“It's near the equator, so it must be hot there,” Henry pointed out.

The other map showed the outline of ancient Egypt. “What's that big, blue line?” Benny asked.

“That's the Nile River,” said Sam. “It was very important to the Egyptians. Egypt is a desert with very little rain. The people depended on the Nile for water to live and to grow their crops.”

They hung the two maps right by the entrance to the exhibit.

Next, they put up an assortment of paintings that showed Egyptians in many different poses: eating, singing, dancing, and driving chariots.

Other paintings depicted Egyptian gods. They had human bodies and some had the heads of animals.

Some of the paintings had rows of tiny little pictures. “What are those?” asked Benny.

“Those are hieroglyphics, a kind of Egyptian writing system,” Sam said. “It was created over five thousand years ago. The pictures might stand for a sound, a letter, or a whole word.”

Sam and the children stood in the center of the hall and looked around slowly.

“I'm going to get Pete to come up and see how great it looks,” said Violet.

The two went downstairs to Pete's office. His door was closed and it looked dark inside. Violet knocked. As the children waited for an answer, they couldn't help overhearing the conversation in Dr. Snood's office next door, as his door was open.

“I'm worried because Ms. Delaney, the director of the Carson City Museum, called again. They're quite upset over there,” Dr. Snood was saying.

“What did she say?” the children heard Pete ask.

“She said the Carson City Museum isn't happy about working with us on next year's festival. They feel we stole the Egypt exhibit away from them,” said Dr. Snood.

Violet and Benny looked at each other, their eyes wide.

“Well, that's how they feel,” said Dr. Snood. “You know, for the past few years we've always worked well with them. That is, before you started here and suggested this exhibit.”

“Maybe there's something we can do,” Pete suggested.

“You work on it,” said Dr. Snood. His voice sounded angry.

A moment later, Pete emerged from Dr. Snood's office. His face looked serious until he spotted the Aldens. “Violet, Benny,” Pete said with a smile. “How's everything going?”

“We've put up all the paintingsâwant to come see?” Violet asked.

“I'd love to,” said Pete. He turned back into Dr. Snood's office. “Reginald, would you like to come see how the Egyptian exhibit is going?”

“I've got to make a phone call,” Dr. Snood said. “Then I'll come up for a quick look before my lunch meeting.”

When they entered the exhibit hall a few minutes later, Pete broke into a huge grin. “This looks fantastic. I'm sure Dr. Snood will be pleased when he sees it.”

Sam, who had been waiting with Jessie and Henry, said, “Oh, is he coming up?”

“Yes, he said he'd come up for a few minutes before his lunch meeting,” Pete said.

Sam looked at her watch. “Is it lunchtime already? I've got to run.”

“Can't you stay a few minutes to talk to Dr. Snood?” asked Pete.

“No, I'm meeting with the man who's designing the guide for the exhibit, and it may take all afternoon. I'll see you tomorrow.” She went quickly into the prep room and grabbed her things. Then she was gone.

Dr. Snood appeared in the doorway a moment later. He walked slowly around the room, looking at the freshly painted walls, the clean glass cases, and the paintings the children had helped put up.

“I must admit, it does look nice in here,” he said in a tight voice, as if it were hard for him to say something nice. “And where is Dr. Dickerson?”

“Sam had to leave in a hurry,” Pete explained.

“You'd think our expensive Egyptian expert could make time to meet with me. We're certainly paying enough,” he said. “Why are all the display cases empty?”

“We just cleaned them yesterday,” Jessie said. “Sam is going to arrange the pieces soon.”

“So I assume the artifacts are still in the prep room,” Dr. Snood said, heading in that direction.

Pete turned to the kids. “I think he's pleased. You've done a great job. Why don't you take the afternoon off, and we'll see you back here tomorrow.”

“Okay,” Violet said. The Aldens went into the prep room to get their backpacks. 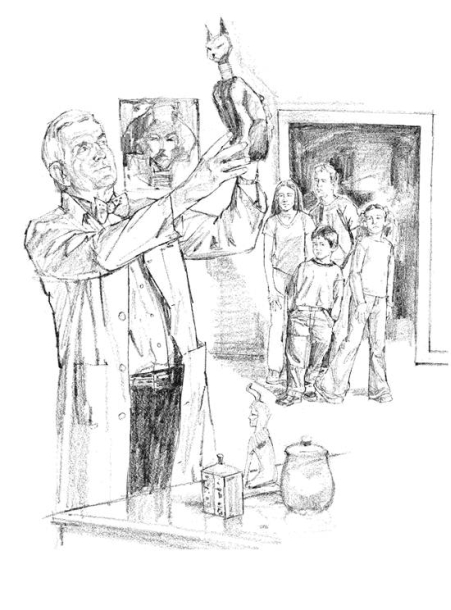 Dr. Snood was there, standing beside one of the tables of artifacts. He was holding one of the gold cat statues, turning it slowly around in his hands. He had a dreamy smile on his face, as if he were thinking of something far away.

As the Aldens watched, he put down the cat and picked up a bright blue sculpture of a hippo. He must have felt the children's eyes on him, because he suddenly looked up. The look on his face changed abruptly. Now he looked as if he'd been caught doing something he shouldn't be. He quickly put the hippo down.

“You kids haven't been touching these, have you?” asked Dr. Snood.

“Make sure you don't,” said Dr. Snood in a stern voice. “And make sure the lid on that coffin stays closed.”

“Of courseâ” said Jessie. Before she could say any more, he walked out.

The Aldens stood still for a moment, stunned by Dr. Snood's harsh behavior.

At last Jessie said, “I don't know which was stranger: the way he was looking at those artifacts or the way he just spoke to us.”

“I don't know, either,” Henry agreed. “I wonder what he was thinking about when we first came in and he was holding the statues.”

“It was as if he were in another world,” said Violet.

“And then he got so angry all of a sudden,” said Jessie. “And we would never touch the artifacts!”

“Maybe Sam told him about the thief and so he's worried the pieces aren't safe,” said Henry.

“He doesn't seem to trust us much,” Violet said.

“There was something else, too,” Jessie said. “Did you notice how he called Sam âour expensive Egyptian expert' in that nasty tone?”

“Sounds as if he's upset the museum is paying her so much money,” Henry said.

“Or maybe he's jealous,” Violet suggested. “Remember, Pete said Dr. Snood used to be a leading expert on Egypt? Maybe he doesn't like the fact that Sam may know more than he does now.”

She and Henry picked up their backpacks. But Jessie was still digging around in her backpack when the others were ready to go.

“What's not in there?” asked Violet.

“My notebook,” said Jessie. “The one with the list of artifacts.”

“Are you sure you put it in your backpack?” Henry asked.

“Have you looked at it since yesterday?” Violet asked.