Mystery of the Mummy's Curse (8 page)

“You know there's one person we haven't talked about,” said Violet.

“Who's that?” Jessie asked.

“Sam,” Violet said. “It would be really easy for her to steal these things.”

“But why would she want to ruin her own exhibit?” asked Henry. “That would only make her look bad.”

A few minutes later, Pete came upstairs. “The exhibit looks great,” he said, strolling from one display case to the next. “I can't believe we got it ready in time for tomorrow's opening!” He grinned at the Aldens. “Thanks to you guys.”

“Yes. We're having a little party tomorrow night,” Pete explained. “We've invited the museum members and also the press. And of course you all must come.”

“I have one more job for you to do,” Pete said. “Would you call the local newspapers and remind them to come to the opening?”

“Why do you invite them?” Benny asked.

“They'll write articles about the exhibit in their newspapers,” Pete explained. “When people read them, they'll want to come see for themselves. That's how we'll make sure we get lots of visitors for the exhibit.”

“Great,” Pete said. “The list of names and numbers is in my office. You can sit there and use my phone while I get some lunch.”

“Okay,” said Benny. “As long as you bring some back for us!”

The Aldens used Pete's office to make their phone calls.

Henry had already spoken to a man at the local television news station. Now he was calling the local radio station. “Hello, I'm calling from the Greenfield Museum,” Henry said, just as Pete had told him to. “I wanted to remind you about the opening tomorrow night of our latest exhibit, âEnter the Mummy's Tomb.'”

“We'll have someone there to cover it,” said the man on the other end.

“Great,” said Henry, hanging up the phone. Jessie checked the radio station off her list.

Henry dialed and listened to the phone ring a few times. Then a woman answered.

“Hello,
Greenfield Daily News”
she said. “Can I help you?”

“Hello,” Henry said. “I'm calling from the Greenfield Museum to remind you of our opening tomorrow night.”

“Yes, thank you,” he said, sounding puzzled. He hung up the phone.

“That was strange,” he said.

“Why? What did they say at the newspaper office?” Violet asked.

“It wasn't what the woman said,” Henry said slowly. “It was her voice. It sounded so familiar.”

“Maybe it was some friend of Grandfather's,” Benny suggested.

“Anyway, we have a few more names to call,” Jessie reminded him.

The children were finishing the phone calls when Dr. Snood came in.

“He's getting lunch,” Jessie said. “He asked us to make some phone calls about the opening.”

Dr. Snood turned and started to leave. He called over his shoulder, “Does Dr. Dickerson have everything ready?”

Dr. Snood stopped abruptly and turned around. He looked at Henry strangely. “
She?
” he repeated. “Sam Dickerson is a woman?”

“Haven't you met her?” Jessie asked.

Dr. Snood shook his head. “I've been so busy the past two weeks. Whenever I've gone up there, Dr. Dickerson hasn't been in. Pete scheduled a meeting for the three of us and ...” He paused and then said awkwardly, “
she
couldn't come. Anyway, it doesn't matter. I saw the exhibit and it looks excellent.” He walked slowly out of Pete's office.

“That's weird he never even met her,” said Violet.

“Well, Sam did keep some pretty strange hours,” Jessie pointed out as she placed the list on Pete's desk. “She'd come in late, leave all of a sudden, you know.”

The Aldens left the office and went back upstairs. As they entered the prep room, Sam was there, talking on the phone. “Oh, you'll love this little cat,” she was saying to the person on the other end. When she saw the children, she quickly stopped talking. “I'll speak to you later.”

She hung up the phone.

“I was telling my friend about the new kitten I just got,” Sam explained.

“
Another
one?” Jessie said.

“I couldn't resist,” said Sam. She picked up her bag and put it over her shoulder. “Everything's ready for tomorrow. I'm heading home now.”

“Hey, wait a minute,” Benny said, noticing the coffin at the back of the room. “What about the mummy? Isn't that going to be part of the exhibit?”

“Of course,” Sam said. “Well move the coffin in tomorrow and open the lid. See you tomorrow at seven. Lock up when you go.” She headed off down the hall.

The Aldens picked up their backpacks. “Well, tomorrow's the day,” Jessie said, “and the exhibit's all ready.”

“Looks like we beat the mummy's curse!” Henry said, giving Benny a playful punch on the shoulder.

Before he left, Benny took one last look around the prep room. At the back of the room was the brightly painted coffin. Benny walked over and gently placed his fingers on the edge of the lid, which was shut tight.

The next day, the Aldens were at home eating lunch when Benny said, “I can't wait until tonight to see the opening of the exhibit.”

“I just hope nothing else goes wrong,” said Violet.

“Maybe we could just stop in and see if they need any last-minute help,” Jessie said.

The Aldens hiked over to the museum. When they arrived, they found Pete and Dr. Snood in the lobby. Pete was standing beside a pair of signs that read:

Opening at 7:00 This Evening

The signs were mounted on sturdy metal stands. With them was a pair of metal poles linked by a red velvet rope.

“Hello!” Pete said when he saw the children. Dr. Snood said nothing.

“None that I can think of,” said Pete. He looked at Dr. Snood, who shook his head. “Sam isn't coming in until later, and we haven't even gone upstairs yet.” Pete placed one of the signs in the center of the lobby, next to the main desk. He stood back to see how it looked.

Then he turned to the Aldens. “Actually, there is something. Can you put these up in front of the entrance upstairs so no one will go in until tonight?” He motioned to the sign and velvet rope.

“We'd be happy to,” Henry said, picking up the sign.

Jessie and Violet each took one of the metal poles. They walked slowly upstairs.

As they came down the hall, they could see that both the prep room and the exhibit hall were dark and deserted.

But when they reached the prep room, they stopped short.

The door of the prep room was open. The children had locked the door before they'd left the night before. Who would have opened it? Pete had said Sam wasn't in yet, and he and Dr. Snood hadn't been upstairs that morning. The only other person who would have a key was the security guard, and she had no reason to go in there.

Had someone broken into the prep room?

The children looked at each other silently. “What's going on?” Henry said quietly.

The Aldens peered into the dark room. Everything looked just as they had left it the evening before. Sam's papers were stacked neatly on her desk. Her chair was pushed in underneath. The coffin was still at the back of the room.

Jessie bent down and studied the lock on the door.

At last Violet asked what they were all wondering. “Did someone break in?”

“Looks that way,” Henry said. “We locked the door last night, so whoever it was must have picked the lock.”

“Wait a minute,” Jessie said suddenly. “If someone was trying to get in, they'd pick the lock from the
outside
, right?” she asked. 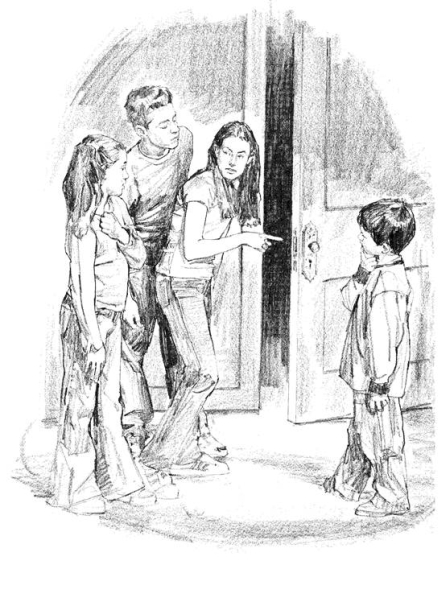 “Well, look at these scratch marks.” The children bent and looked where Jessie was pointing.

“If someone was trying to get in, he or she would be on the outside of the door, right?” Jessie asked. “But the scratches are on the
inside
.”

“So this lock was picked from the inside,” Henry said.

“Someone was trying to break
out
,” said Jessie.

The children looked back into the room. They looked all the way down to the other end where the coffin lay. And then they noticed something they hadn't noticed before.

Something even more frightening than the picked lock.

The lid of the coffin was open.

CHAPTER 10
The Truth Comes Out

The lid of the coffin wasn't completely open, but it was pushed back several inches. It definitely was not the way it had been left the night before.

From across the room, it was too dark to see if the mummy was still inside.

“That's ridiculous, Benny,” said Jessie. But she didn't sound sure.

“Then who was it?” asked Benny.

“I don't know,” said Jessie. “But it wasn't the mummy. The mummy has been dead for thousands of years.”

The children began walking slowly to the other end of the dark room. They didn't take their eyes off the coffin. Benny lagged behind, afraid of what they might findâor not findâwhen they got there.

The coffin was exactly where it had always been, its painted designs visible even in the dim light. When they'd crossed the room, the children stood a few feet away, just looking at it.

They knew the mummy couldn't get up and move. They knew, as Jessie said, that it had been dead for thousands of years. But in the darkness, with the lid of the coffin slightly open, somehow anything seemed possible.

He was trying to peer inside the gap left where the lid had been pushed back. But the light was so dim that it was hard to see.

“Is the mummy still there?” Benny asked nervously.

“Yes, I think so,” Henry said, squinting and moving closer.

“This is silly,” Jessie said at last. She walked quickly back to the door and switched on the light.

Henry stepped up to the coffin and looked in. He could see the magnificent death mask peering up at him from inside the coffin. “Yes, there it is,” he said, breaking into a smile.

The others breathed a sigh of relief and moved closer to see for themselves.

“There's something else in there, too!” Benny cried, pointing in the coffin.

The other children peered in. There was a large, straw bag tucked in next to the mummy.

Benny looked inside. All he saw inside was a brown-paper bundle. He put it up on the table. Before Henry could stop him, Benny had begun unwrapping it. 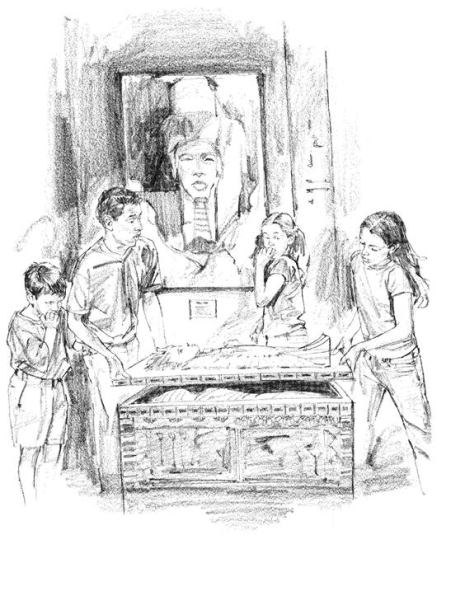 “I don't think you shouldâ” Henry began. But he stopped speaking when he saw what was in the package. “I don't believe it!” he said.