Mystery of the Mummy's Curse 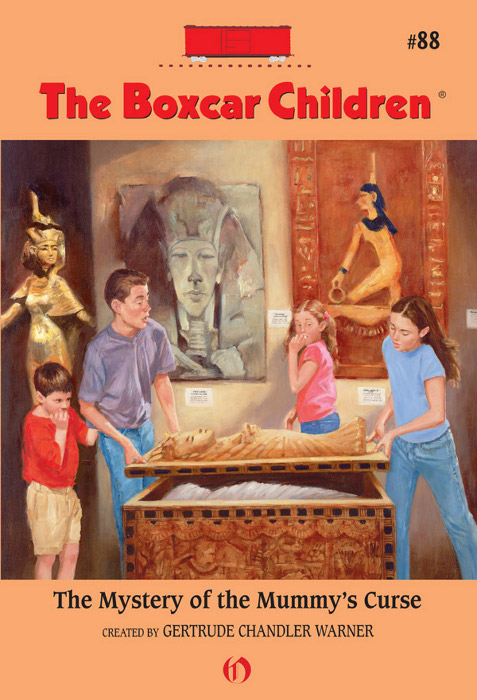 1. A Secret at the Museum

5. A Thief in the Museum

7. The Feeling of Being Watched

CHAPTER 1
A Secret at the Museum

“Wow, look over there! Is that a T-rex?” Six-year-old Benny Alden was pointing toward a giant skull with long, pointed teeth.

“Yes, Benny, I think it is,” said his twelve-year-old sister, Jessie.

“Cool,” said their sister Violet, who was ten. She came over for a closer look.

“And look at this triceratops skull,” said Henry, their fourteen-year-old brother. He pointed to another skull with horns coming out of the top. 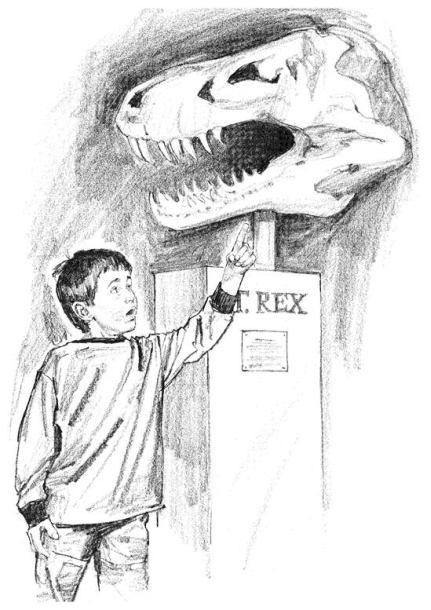 The children were visiting the Dinosaur Room at the Greenfield Museum. “I always loved this room when I was a kid,” said their grandfather, James Alden.

The children had lived with their grandfather ever since their parents died. At first, afraid that he would be mean to them, the children had run away. They had lived in an old boxcar they'd found in the woods. But once they met their grandfather, they found that he was a kind man, and they came to live in his large house. They had been happy there ever since. Grandfather had even moved the boxcar to their backyard, so the children could play in it. And today they were visiting the local museum.

When the Aldens had seen all the dinosaur bones, Grandfather asked what they would like to do next.

“We should have guessed,” said Jessie. “It's been at least an hour since breakfast.”

Everyone laughed. They knew Benny was always hungry.

“Maybe soon, Benny,” Grandfather said. “But first there's someone I'd like you to meet.” He led them down the hall to a door that read, MUSEUM CURATOR.

“Come in,” called a voice inside, after they knocked.

Grandfather pushed open the door to reveal a small office where a dark-haired man was sitting behind a desk. The man was tall and thin with a friendly smile on his face. He stood up when he saw the Aldens and came over to say hello.

“James Alden!” the man said, reaching out to shake Grandfather's hand. “My father told me you still lived in Greenfield.”

“It's good to see you, Pete,” Mr. Alden said. “Children, this is Peter Miller. I've known him since he was born. His father is an old friend of mine. When he told me Pete had come to the museum to work as the curator, I had to stop by and say hello.”

“And these must be your grandchildren,” said Mr. Miller. “Don't tell meâthe tall one is Henry, Jessie is over here, Violet has the purple shirt on, and this must be Benny.”

Benny grinned. “You got it!”

“Would you like to join us for some lunch, Mr. Miller?” Henry asked.

“When did you become the curator here?” Grandfather asked as they walked down the hallway to the museum cafe.

“And what is a curâwhat's that word again?” Benny asked.

“A cu-ra-tor,” Pete said slowly. “It's the person at the museum who puts together the exhibits.”

“Which exhibits did you put together?” asked Jessie.

“What's it about?” Violet asked.

Before Pete could answer, Benny called out, “Hey, look! A mummy!” Everyone turned to see where Benny was pointing. On the wall was a poster of an Egyptian mummy.

“That answers Violet's question,” Pete said. “That poster is for our new exhibit about ancient Egypt. It's called âEnter the Mummy's Tomb.'”

“Will there really be a mummy?” Benny wanted to know.

“You bet,” Pete said as they reached the cafÃ©. “Let's get some lunch and I'll tell you all about it.”

A few minutes later, Pete and the Aldens sat down to eat. The children had chosen sandwiches and fruit, and the two men were having soup.

But for once, Benny wasn't interested in food. “Please tell us about the mummy,” he begged Pete.

Pete began speaking in a low voice. “The director of the museum wants to keep the details of the exhibit a secret,” he explained. “But I don't think anyone will hear me.”

“Why are you keeping it a secret?” Jessie asked quietly.

“Well, it's not really a secret,” Pete said. “We've announced the exhibit in the newspapers and put up posters around town. But this is the biggest exhibit ever to come to the Greenfield Museum. We want to make sure we've got it all set up perfectly before we let out any details.”

“You must know a lot about Egypt if you made an exhibit about it,” Benny said.

“Actually, the exhibit was put together by the Egyptian Museum,” Pete said. “We're renting it from them. Museums often share exhibits. We've also hired an expert on Egypt to help set it up.”

Pete paused to eat a spoonful of his soup. Henry looked around and noticed that a young woman sitting near them had stopped eating her lunch and was watching them closely. Henry wondered why.

“Do you know what a mummy is?” Pete asked Benny.

“It's a dead person wrapped in bandages, right?” Benny said.

“That's about right,” Pete said. “In ancient Egypt, they believed that when a person died they would still need their body. So they figured out a way to preserve it. They did such a good job that some mummies have lasted for thousands of years.”

“Some mummies, especially the mummies of kings, are decorated with beautiful masks and fancy painted coffins. Some have gold and jewels on them. But our mummy isn't quite that fancy. Our exhibit will also show lots of things Egyptian people made and used thousands of years ago.”

Henry was very interested in the exhibit. But he couldn't help thinking that someone else seemed to be, too. The woman sitting nearby was still watching them. She had finished eating, but she continued to sit at her table looking toward the Aldens. Henry wondered if she could hear what they were saying.

When they'd all finished their lunches, Pete said, “I'd better get back to my office.”

“When did you say the exhibit opened?” Jessie asked.

“I don't know if I can wait that long!” cried Benny.

Pete smiled and his eyes sparkled. In a hushed voice he said, “The mummy is being delivered this afternoon. Would you like to see it?”

Without a moment's pause, all four children cried, “Yes!”

Pete and Grandfather laughed. “I have to get back to my office,” Grandfather said, “but the kids can walk home later without me.”

As the children said good-bye to Grandfather and left with Pete, Henry looked back at the young woman sitting near them. For the first time, she noticed Henry looking at her. She quickly stuffed whatever she was holding into a large, orange bag at her feet. Pete had said the details of the exhibit were supposed to be a secret. Had the woman overheard? Had she been listening to their conversation? And what had she put into her bag?

As Pete led the Aldens back down the hall, a voice called out, “Pete?”

Pete turned and stepped into the office next to his. “Yes, Reginald?” he said, motioning for the children to follow him.

Sitting behind a desk was a man about Grandfather's age. Behind him were a large Egyptian painting and a bookcase. Crowded in with the books were Egyptian pots and sculptures.

“Has the mummy arrived?” the man asked.

“I was just going to check now,” Pete said. “These are the grandchildren of my father's good friend.” Then he turned to the Aldens. “This is the director of the museum, Dr. Reginald Snood.”

Pete turned back to Dr. Snood, who was putting papers into his briefcase. “I'm bringing the kids to see the mummy, if you'd like to join us ...”

Dr. Snood didn't seem to hear what Pete had said. He seemed to be deep in thought for a moment. Then he shook his head and seemed to see the Aldens for the first time. “I hope these children know not to touch anything,” Dr. Snood said. “In my opinion, children don't belong in museums.”

“I just hope we haven't taken on more than we can handle with that exhibit,” Dr. Snood said, snapping his briefcase shut and standing up.

“Dr. Snood is one of the world's leading Egyptologists,” Pete told them. “That means he's an expert on ancient Egypt. He collects all kinds ofâ”

“That was years ago,” Dr. Snood said, cutting Pete off, “before I became the director here. Now I have a museum to run. I have to make sure we don't waste all our time and money on one exhibit.”

“This was expensive, but it will be such a hit,” Pete insisted. “Sam Dickerson, the Egyptologist we've hired, will handle all the details.”

“We're paying Dr. Dickerson too much,” Dr. Snood said sharply. “We should have let the Carson City Museum have this exhibit.”

Pete took a deep breath. “Well, anyway, as I mentioned before, we're expecting the mummy to be delivered soon. Would you like to come see it?”

A strange look passed over Dr. Snood's face again. Then he seemed to change his mind about something. “No, I can't ...” he said. “I have ...a meeting. This is a very busy week.” And he quickly left the office.

The Aldens looked at each other. Why had Dr. Snood left so quickly?

After a moment, Benny said quietly, “I don't think he likes us.”

Pete laughed. “He takes a little getting used to. He has a very big job, running the museum. He has to make sure the museum has enough money to pay for all the exhibits and the people who work here.”

They walked slowly out of Dr. Snood's office and headed down the hall.

“What did he mean about the Carson City Museum?” Henry asked.

“I didn't know museums fight over their exhibits,” said Jessie.

“Sometimes they do,” Pete said. He looked at his watch. “Come on, we've got a mummy to meet.”

Pete led the children upstairs and down a long hallway to a room filled with tables and cardboard boxes. There was a desk in one corner with a computer on it and several neat stacks of papers and notecards. “This is the prep or âpreparation' room,” Pete said.

At the back of the room were two large crates. Next to the crates stood two women. One was tall with lots of curly red hair. The other woman was short and blond.

“Dr. Dickerson,” Pete said, walking to the back of the room and putting out his hand to the tall, redheaded woman.

Dr. Dickerson threw back her head and laughed loudly. “That happens all the time. My real name is Samantha. But people call me Sam.”

Out of the Black (Odyssey One, Book 4) by Evan Currie
Cookie Dough or Die by Virginia Lowell
Burned by Jennifer Blackstream
The Woman Who Married a Bear by John Straley
The Eye Unseen by Cynthia Tottleben
Nineteen Eighty by David Peace
Thief (Brotherhood of the Throne Book 1) by Jane Glatt
Prin foc si sabie by Henryk Sienkiewicz
Peggy Dulle - Liza Wilcox 01 - Death Is Clowning Around by Peggy Dulle
Accepted Fate by Charisse Spiers