Mystery of the Mummy's Curse (4 page)

The Aldens looked around at the scuffed and peeling paint. It did look awful.

“Normally I'd hire a painting crew, but we don't have enough money,” said Pete.

“Don't worry. We can handle it,” Henry assured him.

“In here,” Jessie called from the prep room.

Pete and the children joined Sam and Jessie. Sam told Pete about the mess she'd found that morning.

Pete looked as upset as Sam had been. “Who would have been going through your things?” he asked. “Make sure you keep these doors locked. Give Henry a key too, so the kids can lock up when they go in and out.” He headed out the door.

“Ready for lunch, Jessie?” Henry asked. “Pete said we could pick something out in the cafÃ©.”

But Jessie wasn't paying attention. She was looking at the tables. She and Sam had gotten all the pieces organized again, but there was still something wrong. She couldn't figure out what it was.

“Oh, yes?” she said, startled out of her thoughts.

As the Aldens left the prep room, Jessie took one last look at the objects on the table. Something just wasn't right.

When the Aldens returned from lunch, Pete called them into the prep room. “We have a surprise for you,” he said.

The children walked inside and he motioned to the end of the room where Sam was standing. Where the giant crates had been, there was now a large, wooden box. It was completely covered with elaborate paintings of people and animals.

“That's the mummy's caseâits coffin,” Sam explained, leading the children over to look. “We unpacked the crates.”

“So that's what was in the other crate,” Benny said.

“The Egyptians painted pictures of their gods on the mummy cases. They'd also paint things that the person liked when they were alive,” Sam explained.

“You can see for yourself,” Sam said. She and Pete carefully lifted the heavy, wooden lid. They laid it on the table beside the coffin.

Everyone peered into the coffin. The mummy was lying inside with a large, painted mask over its face.

“Look at that!” Benny exclaimed.

“That's the death mask. It's molded from the person's face and made to look just like the person,” said Sam.

The children stared down at the face in the coffin. Its wide eyes, outlined in black, stared up at them. There was black, straight hair painted on both sides. A gold and red headband painted with fancy designs crossed the brow.

“That's amazing,” Jessie said. She couldn't take her eyes off the beautiful mask.

“Do you know how mummies were made?” Sam asked.

“They wrapped up the dead bodies in bandages?” asked Benny.

“That's part of it,” Sam said. “Normally when a person dies, the body decays. But the ancient Egyptians came up with a way to preserve the body.”

“And then did they wrap it?” Benny asked.

“Yes,” said Sam. “They stuffed it with sand or sawdust to keep the body's shape. Then they wrapped it carefully in strips of linen cloth. They put jewels and magical charms in between the layers, to help the dead person reach the afterworld. It took
fifteen
days to bandage a mummy!”

Sam continued to explain. “Finally, they put the death mask over the mummy's head and placed the mummy in its coffin.”

The children stood for a few more minutes looking into the coffin.

Then Sam said, “I wanted you to see the mummy with its mask on. Now I'm going to put the lid on and keep it closed until the exhibit opens.”

Pete helped her lift the heavy, wooden lid off the table and replace it on top of the coffin.

As Jessie followed the others into the exhibit hall, she took one more look around the prep room. She still had the nagging feeling something was wrong. But what?

A few minutes later, the Aldens had begun work on the walls of the exhibit hall. Henry scraped and sanded the areas where the paint was chipped and peeling. Meanwhile, the other three laid drop cloths over the floor of the exhibit hall and the glass cases. When that was done, they began priming and painting. They worked all afternoon.

It was nearly dinnertime when Pete came up to see how they were doing. “It looks much better,” he said.

The Aldens finished up the corner they'd been working on and stepped back to look.

She and the others closed up the paint cans and cleaned the brushes and pans before they left. As they were walking out, the Aldens talked about all the interesting things they'd seen and learned about ancient Egypt so far.

“That was cool to learn how they made a mummy,” Henry said.

“And I like all those statues,” said Violet. “Especially those two gold cats.”

“And the baboon,” Benny added. 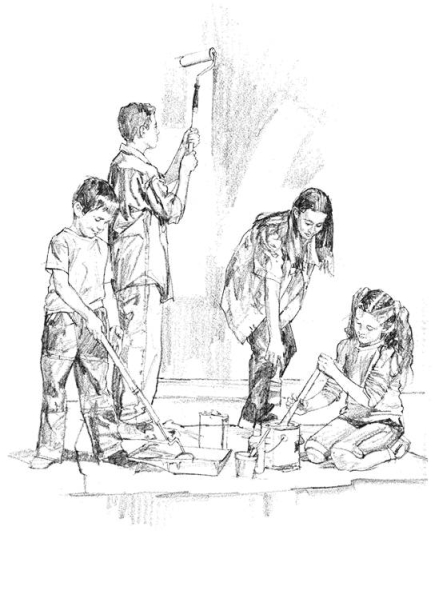 “I noticed something was wrong in the prep room this morning,” said Jessie.

“We all didâsomeone messed everything up,” said Henry.

“Besides that,” Jessie said. “Even after Sam and I had gotten everything straightened out, I kept thinking something was wrong. But I couldn't figure out what it was. Now I rememberâthe baboon wasn't with the other statues.”

“What do you mean?” Violet said. “Sam said that was everything for the exhibit.”

“Or maybe whoever messed up the room stole the baboon,” Jessie said. “Maybe that's why the room was all out of orderâbecause the person was going through all the statues.”

“Was there anything else missing?” Violet asked.

“I don't know,” said Jessie. “That was the only thing I noticed.”

“Why would someone steal that baboon?” Benny asked.

“That doesn't explain why they went through Sam's papers,” Henry pointed out. “Those aren't valuable.”

“So the person stole the statue and the card, too?” Violet asked.

CHAPTER 5
A Thief in the Museum

The Aldens arrived early at the museum the next morning. But this time, the door to the prep room was locked.

“That's good,” said Henry. “Now no one can go in and make a mess or steal something.”

While the children waited for Sam or Pete to arrive, they finished painting the last wall of the exhibit hall.

They were just cleaning their brushes when Sam appeared in the doorway.

“Hello!” she called, heading into the prep room. The Aldens quickly put away all the painting supplies and followed Sam.

“Sam, we were wondering ...” Jessie began. “Are these
all
the pieces for the Egypt exhibit?”

“Are you sure everything's here?” Jessie asked.

Sam looked quickly at Jessie. “What do you mean?”

“Well, the first day we were here, Pete showed us some of the artifacts. And there was a little baboon ...” Jessie said.

Sam's eyebrows furrowed. “The baboon? It's ...” She went over to the tables holding the artifacts and walked slowly from one table to the next. “How odd,” she mumbled to herself. She walked around the tables again before walking quickly to the corner where the boxes were stacked. The Aldens watched as Sam picked up one box after another, making sure they were all empty.

At last, Sam turned around and looked back at the Aldens. “I don't know where it is,” she said. She looked quickly around the room, but there was nowhere else that the baboon statue could have been.

“So you saw the baboon two days ago?” Sam asked.

“Yes,” said Henry. “It was right on the table with the other pieces you'd unpacked.”

“I remember because it was my favorite piece,” said Benny sadly.

“When did you notice it was missing?” Sam asked.

“Yesterday,” Jessie said. “And remember, someone had come in and messed everything up... .”

“Oh, my goodness,” Sam said, sinking into her chair. “So we have a thief.”

Everyone was silent for a moment.

Then Sam spoke. “We mustn't jump to conclusions. The statue may just have been misplaced.”

“There may be other things missing, too,” Jessie pointed out. “I just happened to notice that piece because it was Benny's favorite. Should I go through the list you have and see what else is missing?”

“No,” Sam said. “You kids have done enough work already. Take a break for lunch.”

“Yes, definitely” said Sam. “But not until we're really sure it's missing. I don't want to worry them if I don't have to.”

When the Aldens came back from the cafÃ© a short while later, they were pleased to see how bright and clean the exhibit hall looked with its fresh coat of paint.

“Now all we need to do is wash this filthy floor,” said Jessie.

Henry and Jessie each took a mop and a bucket from the supply closet and found a bottle of floor soap. Violet and Benny found rags and some glass cleaner.

They were returning to the exhibit hall when Sam appeared in the doorway. “Jessie, I've decided I could use your help. I've got too many other things to take care of.” She handed a set of papers to Jessie. “That's the printout of all the items we're supposed to have in the exhibit. You'll see I made a little
x
next to the baboon. Would you make sure there's nothing else missing?”

“Sure,” said Jessie. She followed Sam into the prep room.

Sam sat back down at her desk. Jessie walked slowly around the tables, checking off each item on the list when she'd spotted it. She noted the cups and pots, the doll, the beautiful gold cat statues.

As she flipped through the list, Jessie noted happily that every item had a checkmark next to it except for the baboon, which had an
x.
She was pleased to see that no other items were missing.

Jessie looked back at the table. There had been a wooden flute, hadn't there?

She looked all around the tables, but there was no flute to be seen.

Then she looked at the paper she was holding. Had she somehow missed the listing for the flute? She quickly scanned down the list. The flute was not listed.

“Sam, this is really weird,” she said.

“What is it?” Sam asked, looking up from her work. “Is there something missing?”

“No, everything on the list is here,” Jessie said.

“But I remember something that isn't here,” Jessie said.

“What?” Sam asked, standing up.

“Yes, of course,” Sam said, going to look for herself. “I was planning to put that on display next to the harp. It isn't here?”

“No,” Jessie said. “And what's even stranger, it's not on the list, either.” She handed the list to Sam.

Sam flipped slowly through the list, looking carefully at each page. “You're right, the flute isn't listed.” Then she looked at the tables. “And I don't see it anywhere.” Sam made a note at the bottom of the list. “Another missing piece.”

“I'm not sure,” said Sam. “This is the list I got from the Egyptian Museum. Maybe they added the flute later and forgot to put it on the list.” Sam smiled at Jessie. “Lucky for me you have such a good memory.”

“Are you going to tell Pete about it?” Jessie asked.

“Yes, I'll go right now.” Sam walked to the door. Then she turned around and looked back at Jessie. “Don't say anything about this to him, though. I don't think he'd want everyone to know that pieces of the exhibit were missing. You understand, don't you? Bad publicity for the museum.”

Harvest A Novel by Jim Crace
5 - Together To Join by Jackie Ivie
Hammered by Desiree Holt
Texas Christmas Bride: The Gallaghers of Sweetgrass Springs Book 6 by Jean Brashear
Pack Hunter by Crissy Smith
Bad Boys Down Under by Nancy Warren
Margaret Moore by Scoundrels Kiss
Echoes From a Distant Land by Frank Coates
Diana's Nightmare - The Family by Hutchins, Chris, Thompson, Peter
The Flying Troutmans by Miriam Toews